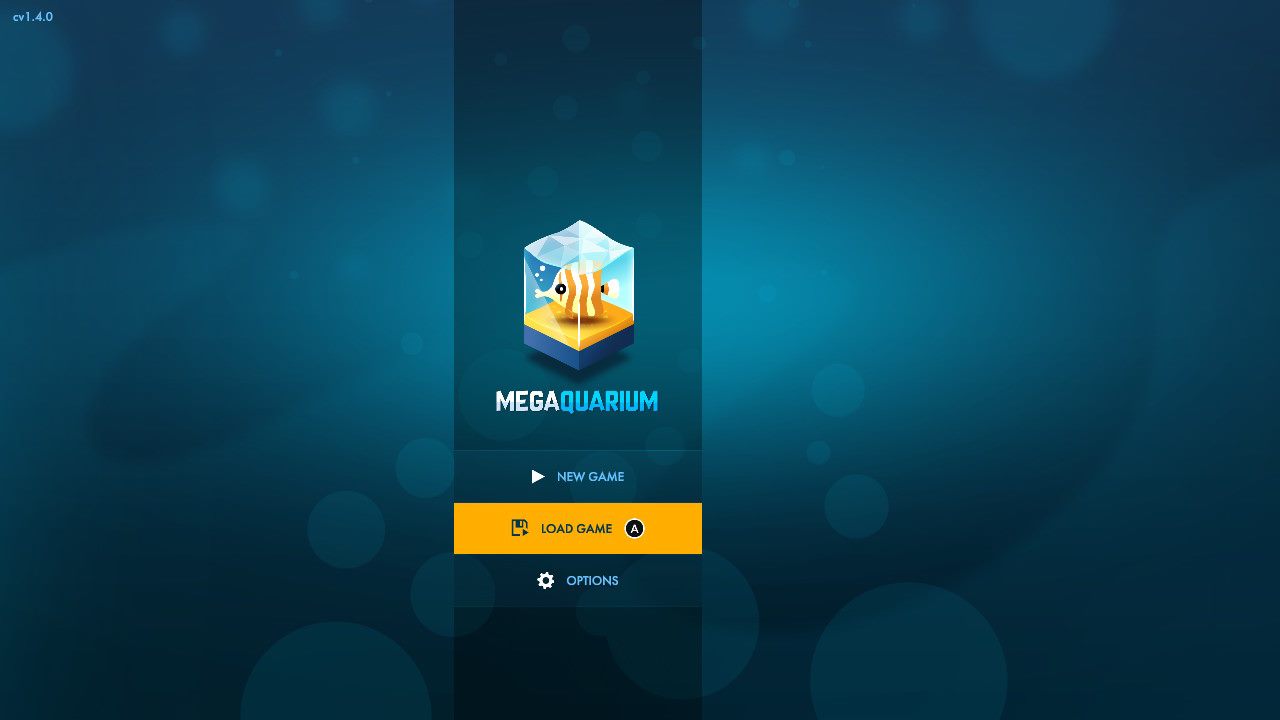 Megaquarium is a simulation strategy game with a tycoon twist. I’ve played my fair share of tycoon games and have a soft spot for simulation games. I also love aquariums and sea life, so when I saw the two were combined, I was intrigued to run my own aquarium. 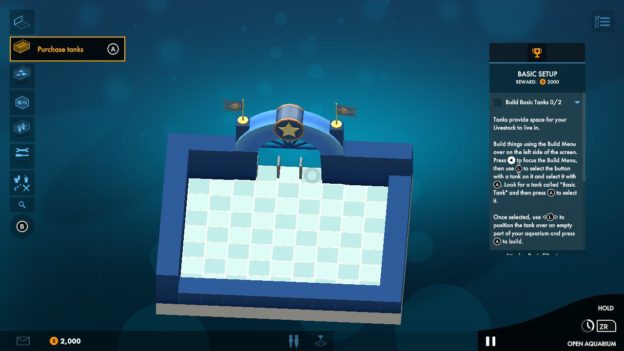 Like most simulation games, there’s no true story. You open up your own aquarium and need to run it efficiently to make a profit. There are two modes to do this: campaign and sandbox. Let’s talk about the sandbox mode first since I didn’t spend a lot of time with that.

The sandbox mode is as it sounds. You can play the game freestyle and customize your aquarium however you like. The game offers a few different styles, such as standard and creator, but there’s also a custom option. You can build your own sandbox by customizing the difficulty level, having everything be already unlocked, and unlimited money just to name a few.

While this mode was fun for a while, I felt like I wasn’t working toward anything. I was already pretty deep into the campaign mode when I tried sandbox, so I knew what I was missing out on. Needless to say, I didn’t stick with the sandbox mode for long. 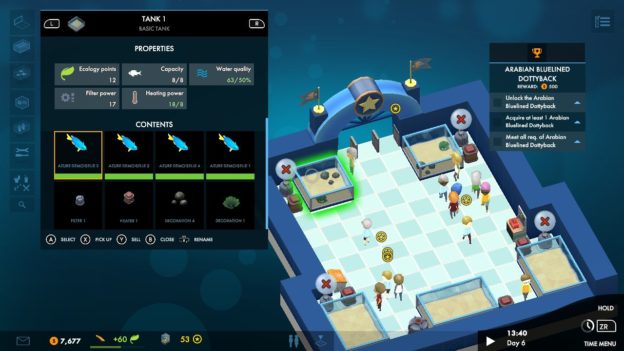 The campaign mode, which I tried first, eases you into the game. Being a simulation, it’s not difficult by any means. However, there are difficulty options for easy, medium, hard, and brutal. These options mean a few things such as everything is more expensive the harder it gets or the clock runs faster so you seem like you have less time during your aquarium’s open hours.

I started my game on easy since I wanted to be relaxed while playing. Tycoon games can ramp up quickly and this one was no exception. Once you have your feet wet setting up your aquarium, there’s always more to do. Also, being a tycoon game, there was more to making money than merely making a profit; you also need to collect ecology points, which are earned from your customers viewing your various tanks. These points unlock more fish. They’ll also give science points that allow you to unlock different kinds of tanks, filters, pumps, and more. 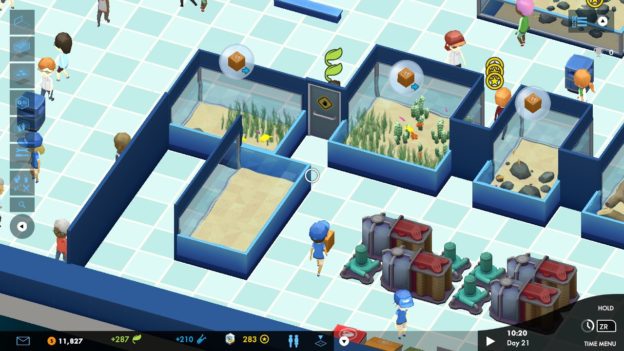 The first part of the game is set in Sunnyside which acts as the tutorial. There are ten levels where the game gives you a checklist of things to do to ease you into the game. The first level, for example, shows you all the controls (and this game uses just about every button on the Joy-Con). Once you figure that out, the game shows you how to expand your store by adding walls, floor space, and doors. It also shows you how to set up the tanks and attach filters and heaters to them, and more.

The fish each have their own stats in order to remain healthy. Some fish need orange pellets to eat, others need the green pellets. Some need a cave in their tank so they can hide, others want plants. Once you add fish to a tank, what they need will appear above the tank in red. Then, once you fulfill it, it’ll go away. There’s a lot to remember so this is very helpful. 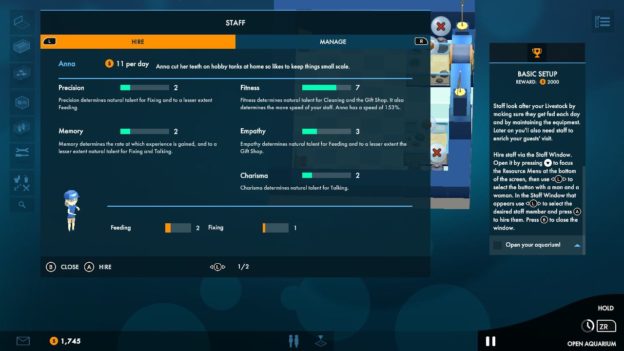 However, that’s also what staff are for. You can hire staff, each one having their own skills such as feeding, cleaning tanks or the aquarium, fixing equipment (such as the filters), and more. You can assign them certain areas to stick to. I tried this and I didn’t find it helpful. If a fish was hungry and the staff in that area was busy with something else, the other staff wouldn’t come. I found the staff more useful when my aquarium was smaller. Once it gets bigger and I have more staff on hand, I’m sure assigning them to parts of the aquarium will work better.

The aesthetics of the game were pleasing. The music was a bit upbeat for an aquarium simulation, but I thought it fit well. The graphics were fun, too. Especially since I figured out that if you zoom in just enough, you’ll end up in the first-person view, allowing you to walk through your aquarium as your customers do. It was a nice touch. 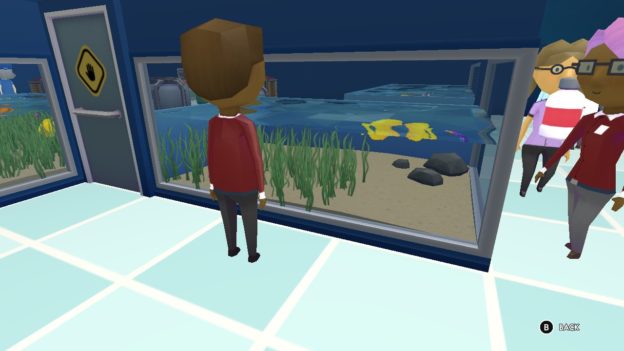 The game can get hectic pretty quick as you expand your aquarium and add more tanks. There’s always something to do whether it’s moving tanks around, improving the rooms, or adding more vending machines and trash barrels for the customers. It’s easy to get sucked in and spend a few hours on this game in one sitting.

Of course, aquariums and simulation games are two of my favorite things, so I had a lot of fun with this one. I can see myself going back to this game once in a while if I want to pick up and play a game that’s not heavily story-based and I can save and quit at any point in the game.

Megaquarium is a solid simulation game with plenty of content. Its simple gameplay can get hectic quickly. If you’re a fan of tycoon games, this is one to try.