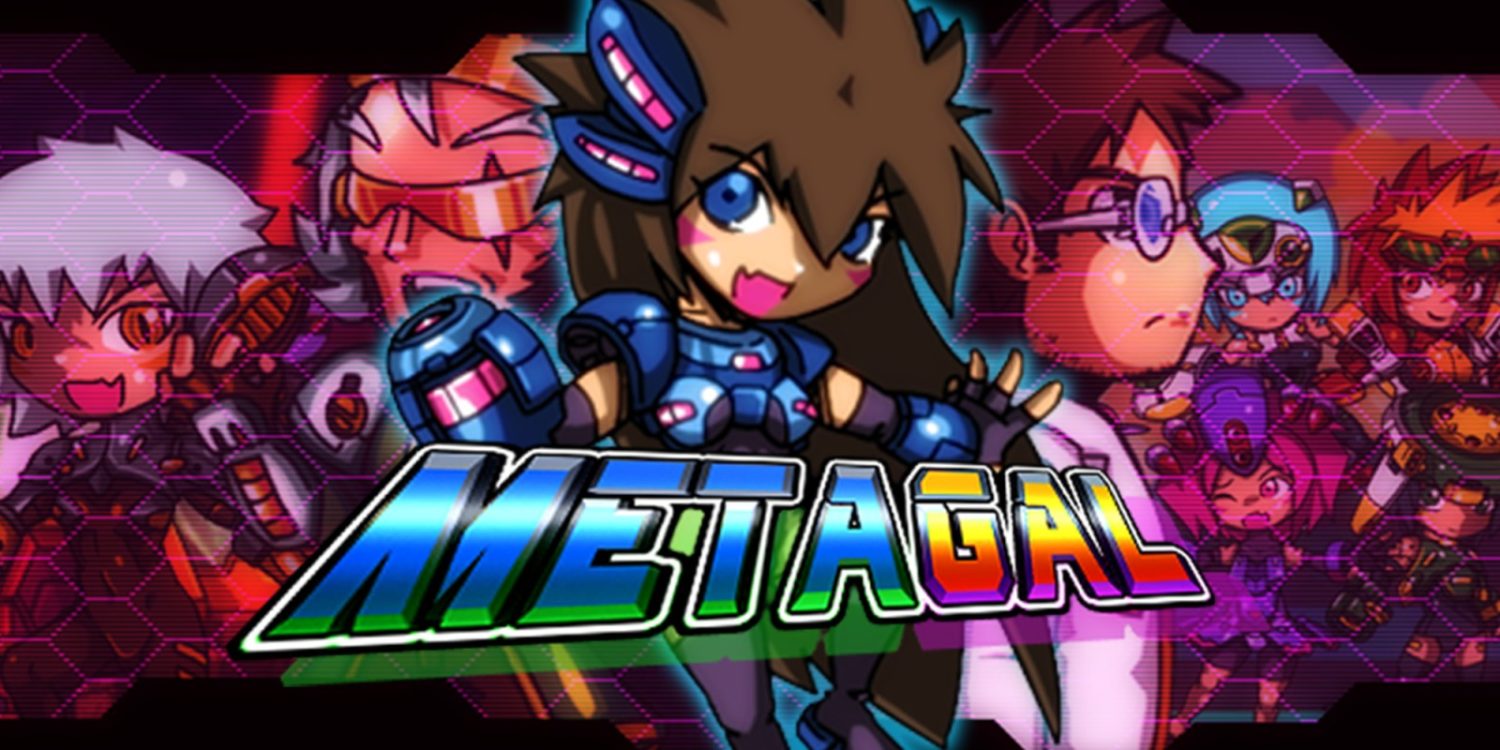 Metagal is an action platformer developed by RetroRevolution for the Nintendo Switch. It’s also a blatant Mega Man clone. And that’s not necessarily a bad thing.

Metagal is a short and sweet game comprising eight levels. That may not seem like a whole lot of content but it’s actually enough to keep you entertained for a few hours. The game follows Meta, a robo-gal on a mission to save the world after her robo-sisters are turned evil. 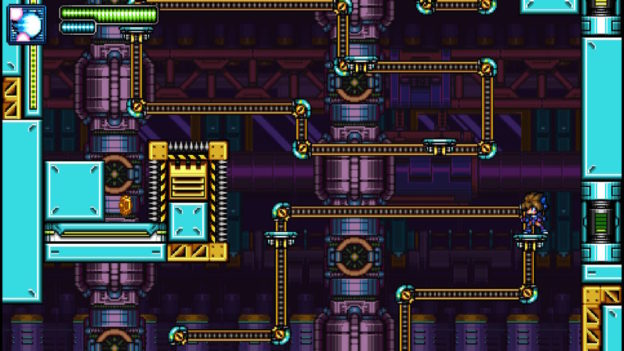 It’s certainly not the deepest plot, but the story is superfluous anyway. The true aim of the game comes from the simple pleasure of blasting robots while navigating some pretty devilish platforming along the way.

The first four levels are themed with unique environments. These are followed by four fortress zones. The themes include an industrial underground level, a greener surface level, another that’s more of a neon city landscape, and a fiery underground lair. 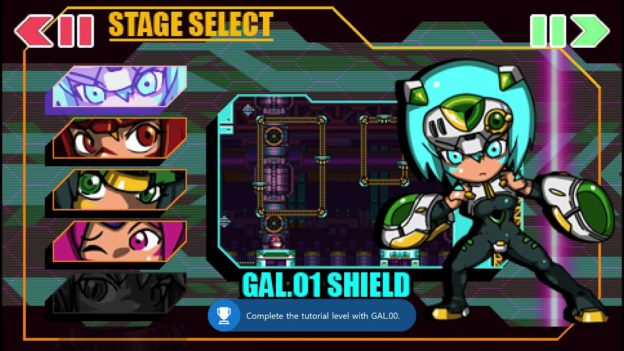 Naturally, there’s a boss waiting at the end of each level. These continue with the theming concept, sporting unique weapons that emit fire, lasers, green homing missiles, and so on. Once bosses are defeated, their weapons are added to your arsenal.

The most important aspect of an action platformer is surely the running and gunning. Thankfully, Metagal does a decent job with both, especially for a budget title. The weapons work well and the platforming is spot on. There are some nice tricks that keep you on your toes, including some neat enemy patterns like shielded robots who don’t attack until you’re within range. You’ll have to jump over their weapons and attack while the shield is down. 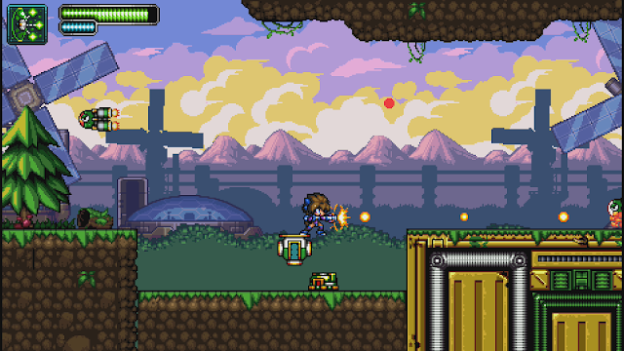 There’s also an interesting regeneration system in use when you die. Rather than simply respawning, you can restart from the beginning of the level or spend a collectible cog to “rebirth” at the start of the last room. You’ll soon gather enough cogs to make this a worthwhile option when you’re near the end of a stage, but if you’re anywhere near the beginning it just makes sense to save up your cogs.

Metagal isn’t the most difficult of its genre, but it’s not too simple either – in fact, it’s a nice balancing act that makes it accessible to most players. I found it difficult enough to take several attempts before completing each level, without it becoming frustrating; and I consider myself a platforming enthusiast of sorts. 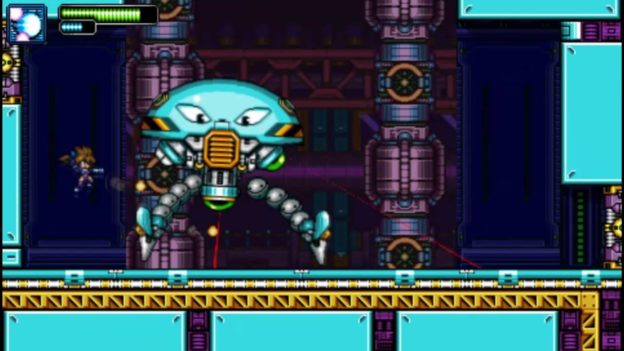 The completion of each level is graded from A to F. This is based on the number of kills, deaths, powers used, and overall time spent on that level. For example, my first completion of a level resulted in a 28-minute session on a par of 6.20 – I achieved a solid F. Another level was 15 mins on a par of 5 – that’s a mighty D, thanks! If you’re aiming high, there’s plenty of replay value here. Since levels are not randomly generated, you can learn the ropes by repetition, meaning the more you play, the easier it will be to get those higher grades.

Visually, Metagal looks great. The crisp graphics work well in their retro, 16-bit way. The backdrops add to the game’s style and visual appeal, with some nice effects – I particularly liked the rain of lava in one level (side note – this was also a fun platforming section). The audio is suitably retro with a soundtrack that, while not particularly memorable, fits nicely into the background and adds a little something to the gameplay without becoming irritating. 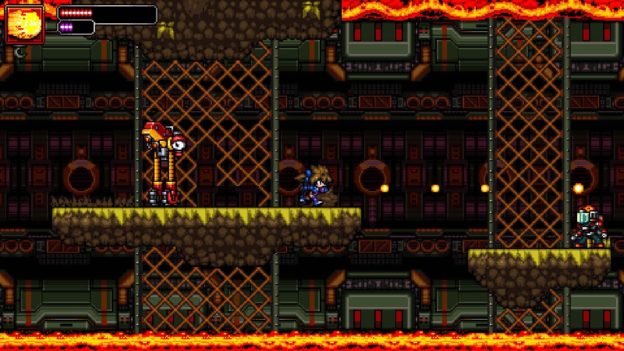 I do have some minor gripes, like a few typos or grammatical errors in the text. The tutorial also leaves a lot to be desired. Despite setting up some of the basic moves for you, the special weapons and the rebirth system aren’t explained at all. An online leaderboard would be a nice inclusion, given the ranking system already in place. And, of course, I always want more levels!

Overall, Metagal is a fun platformer. It could do with more content, but what’s there is an enjoyable ride, and the grading gives you incentive to replay. At $4.99, it’s basically a bargain price and is worth checking out if you’re a platforming enthusiast or Mega Man fan looking for a little action on the side.

Metagal is a fun platformer. It could do with more content, but what’s there is an enjoyable ride with incentive to replay. At $4.99, it’s a bargain that’s worth checking out if you’re a platforming enthusiast or Mega Man fan looking for a little action on the side.