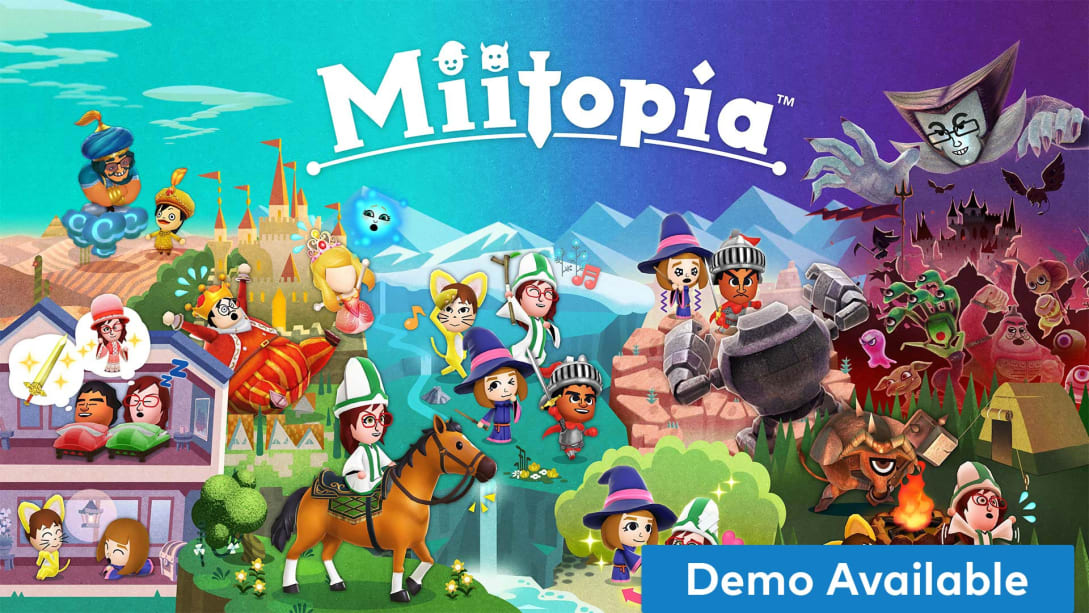 We’re used to seeing ports on the Nintendo Switch. Many games – especially those from the Wii U generation – have graced the hybrid console for another run. Miitopia is the latest such port, this time hailing from the 3DS. Let’s find out whether it deserves a second chance.

Miitopia is an interesting choice for the Switch. It didn’t exactly top the list of 3DS best sellers – although it did scrape into the top 50. Perhaps it had something to do with launching in 2017, late in the handheld’s life. In fact, it was released only a few months after the Switch debuted. It’s fair to say that many of us may have missed this one in all the excitement of the Switch. 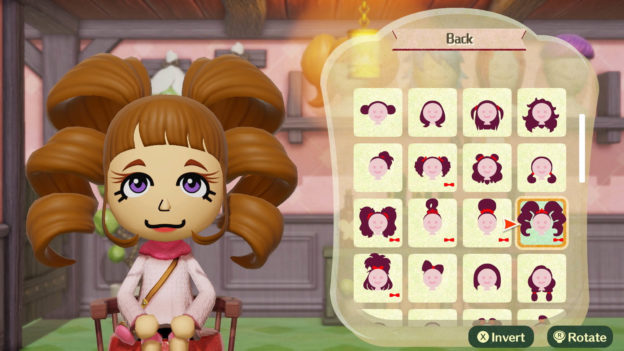 Full disclosure – I did not play Miitopia on the 3DS. This was my first interaction with the game. With its cutesy graphics and Mii-based gameplay, my initial impression was of an enhanced Streetpass title. I thoroughly enjoyed those, by the way – but I also enjoyed the fact that they were either free or relatively cheap. Miitopia for Nintendo Switch comes in at $49.99!

Thankfully, first impressions can be deceiving, and there’s actually a lot of content in Miitopia to help justify the price. In fact, there’s a whopping 30+ hours of gameplay on offer, even more if you want to 100% this thing. So let’s dive a little deeper into what makes it tick.

Simply put, Miitopia is an RPG featuring Miis. You start with your own Mii as the main character, which can be created or imported into the game. It turns out that some dastardly foe is stealing the faces of hapless Miis across the land. These spirit-like faces then attach themselves to monsters for some reason. Your mission, should you choose to accept it, is to fight these monsters and return the faces to their rightful owners. It’s a little grim, but it’s done in a charming Nintendo way. 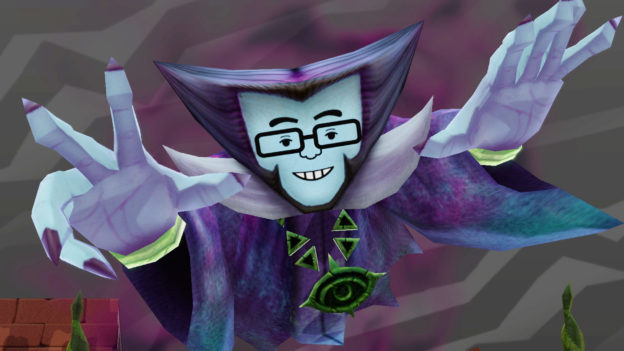 The gameplay is straightforward, making it easy to pick up and play. Battles border on being too easy and won’t satisfy hardcore RPG purists. For example, you can only choose what your character does during a battle; your teammates fend for themselves. Thankfully, this usually works in your favor, with an intelligent AI that’s actually good at attacking the right enemies and reviving others as needed.

It feels automated to someone who has spent a fair amount of time with the big guns of the genre, like Fire Emblem and Final Fantasy, but it’s not meant to have the depth of those big hitters. The game’s strength lies in its customization and character interactions, with fun battles along the way.

You’ll eventually end up with a team of four or five Miis – created by you – each of a class of your choosing. There are the classics, like warrior, mage, and cleric, plus a couple of fun ones, like popstar and chef. For example, the chef uses a pan as a weapon, even unlocking the ability to light it on fire to deal more damage. It’s kind of epic. 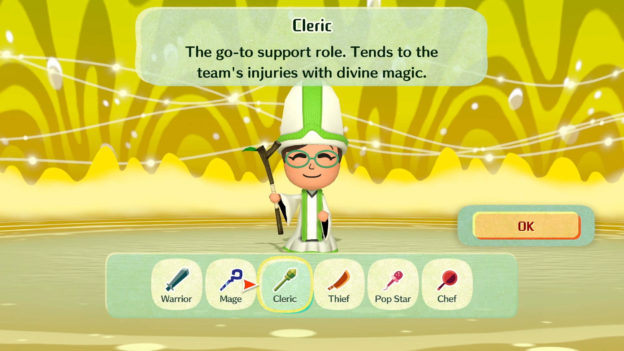 Miis can fill other non-playable roles within the game, too. Who will be the mayor, the lovey-dovey couple, the cheeky child, or the palace guards? It’s absurdly fun to create Miis from people you know and assign them these roles. The Mii Maker tool has been enhanced over the original version, too, with more options to help get those features just right. They’ve even added a horse into the mix!

But the point of all this creation, which is where the game really shines, is your relationship with your teammates. You’re strongly encouraged to build on this as you progress, and it relates back to the battles, too. Between battles, interactions with teammates increase your bond. The stronger your bond, the more likely you’ll be able to assist in battle. 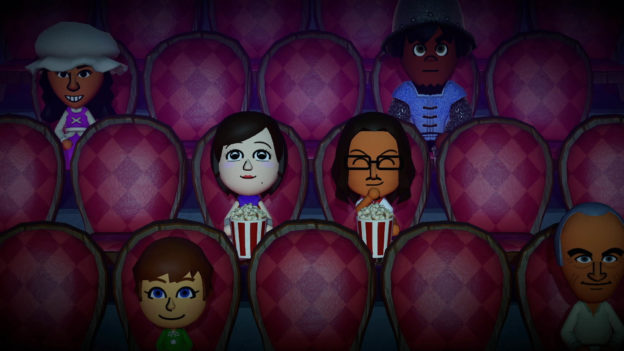 Miis can also go on outings (a new feature in the Switch version), like a trip to the movies or a cafe, complete with little cutscenes and quips about forgetting wallets. It’s cute and touching, especially if you’ve created Miis that relate to each other in real life. My son created a Mii based on our cat and another on his favorite teddy. It was adorable watching his friendship with them grow.

That’s another important point – my kids loved playing Miitopia. Well, I should say love, present tense, as they’re still playing it while I write this review and will probably play it for the next few weeks. Even though the game is single-player, we’re enjoying watching each other play. 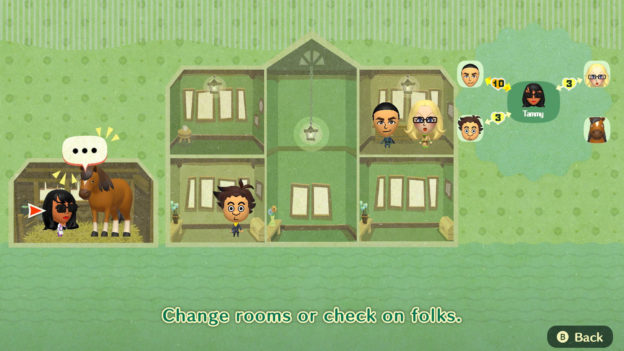 There are lots of extra things that add to the fun of playing (or watching), like the random quotes from the Miis as they walk to the next area. These lines could be anything from “I have a hole in my shoe” to “I need kitty cuddles.” It’s all very sweet and quite amusing.

The aesthetics are suitably matched with this tone, using colorful, bright backgrounds and a catchy, cheerful soundtrack. There’s also some nice orchestral music at times, like when the main villain appears on screen. It combines well with the light-hearted mood to create a well-balanced atmosphere. And this port enhances the graphics from the original game; it looks lovely on the big screen when compared to the 3DS version. 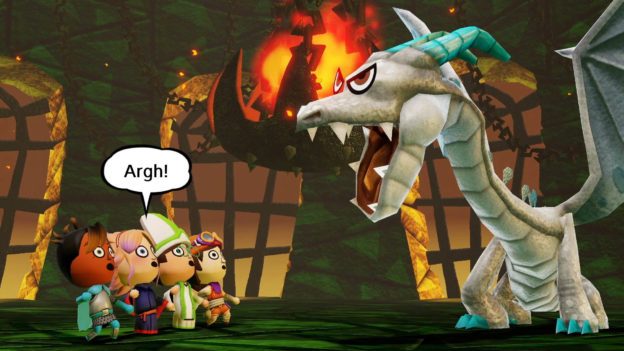 There are a few minor issues I have with the user interface. Firstly, you can only play one file per Switch profile; there are no save slots available. And I couldn’t find a way to restart a game within a profile without literally deleting all relevant save data via the Switch’s settings. So, when I had started my journey but wanted to try different options, I had to use another profile to do so.

Another gripe is that you can’t skip the story intro – or any cutscene for that matter. It’s annoying when you’re replaying and have seen it several times already.

Overall, I’m pleased to say that Miitopia surpassed my expectations. There’s a surprising amount of content here, given the initial appearance and cutesy graphics. If you prefer the light-hearted side of RPGs, there’s a lot of fun to be had. It’s not exactly cheap, though it’s still $10 less than most first-party games, but it’s a lengthy game if you play all the way through. And it is loads of fun creating Miis of your family and friends (or teddies and pets) along the way.

Find out more about Miitopia on the official site.

Miitopia surpassed my expectations! There’s a surprising amount of content here, given the initial appearance and cutesy graphics. If you prefer the light-hearted side of RPGs, there’s a lot of fun to be had, with a lengthy game on offer. And it is loads of fun creating Miis of your family and friends (or teddies and pets) along the way.