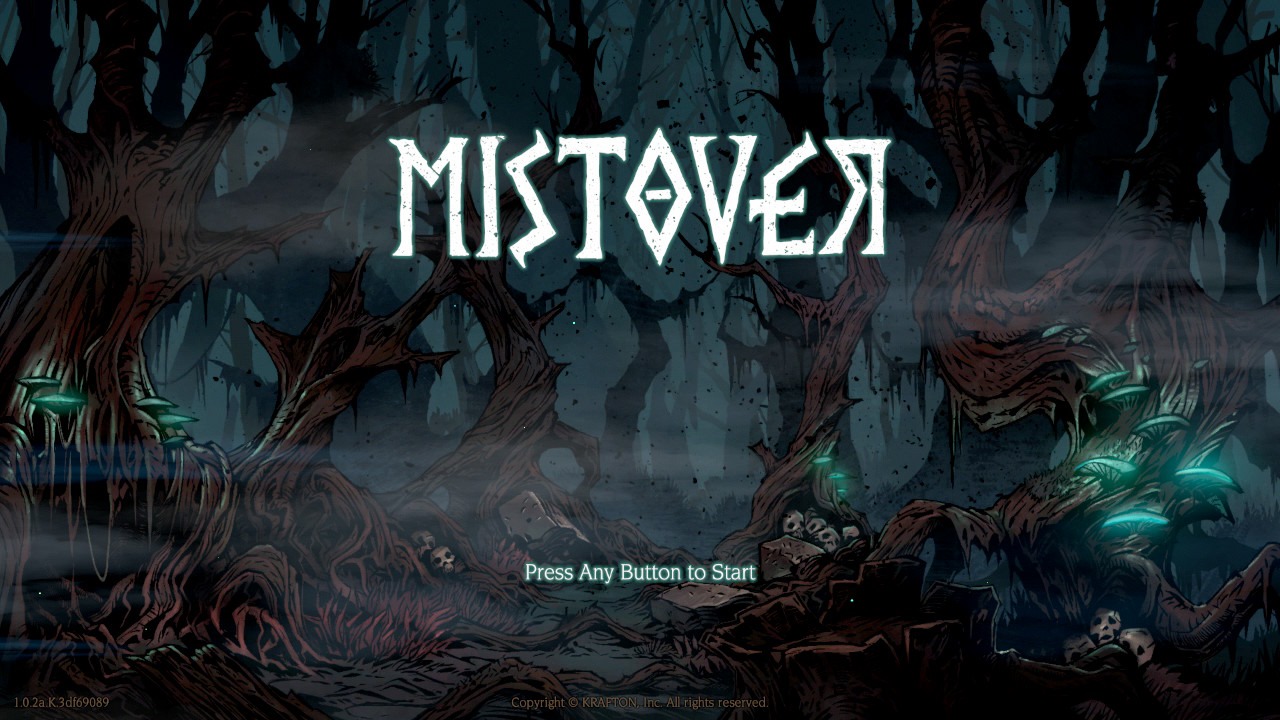 MISTOVER is a strategy RPG in which you form your own Corp and head out on expeditions to find the way to survival. A mist has overcome the area, bringing monsters and enemies with it. Can you survive long enough to defeat it? 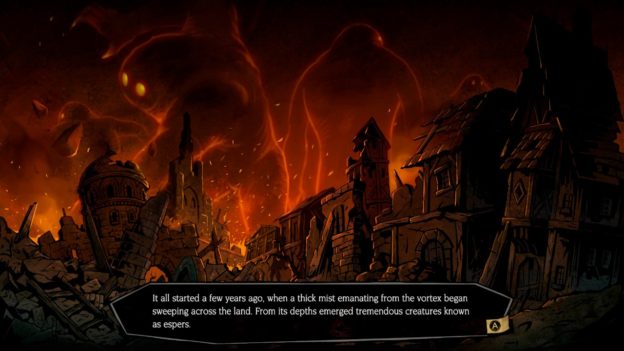 The game opens with a quick synopsis of what happened to the world. Parts of the narrative are told as a visual novel where “you” are the camera and the characters speak directly to you. A mysterious mist took over, killing people and destroying the land. You are found lost in the woods and are known as a “Missing One.” People disappeared in the mist, and once you’re found you’re brought to the town where you are recruited to begin building your own Corp. From there, the expeditions, strategy, and gameplay begin.

You receive your mission and then recruit other members for your team. You can only have five members out on the field at once, though the battle spots are in 3-by-3 grids. This allows your characters to move in different spots as sometimes, depending on where they stand in battle, their attacks won’t reach some enemies. Down the road, you can unlock support attacks. So, if two certain characters stand beside each other they can attack together with a special move. 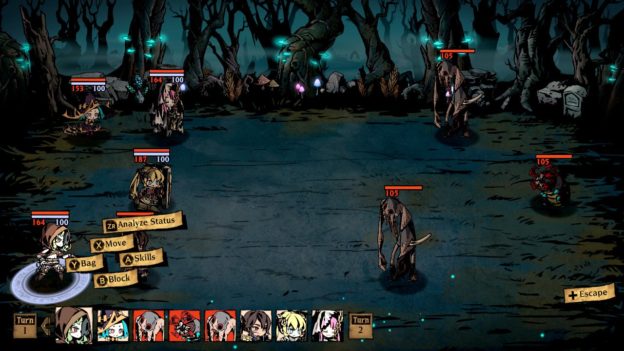 There are various classes such as paladin, witch, and even werewolf. The standard classes for most RPGs are here with a few extras. For example, I enjoyed the sister class which is a nun that has witch and cleric-like powers. Each class has its own special move and can be proficient in certain areas. For example, the paladin tends to have a higher attack stat over the witch who has a higher magic stat.

The battles are turn-based and, similar to Octopath Traveler, the turn order is pre-determined. This made it easier for me to plan as I often attempted to kill the enemy who was next to attack. Like most battle systems, however, there are status ailments. Guard, for example, allows the character to block some of an attack and gives them a chance to retaliate, which then allows them to attack next. 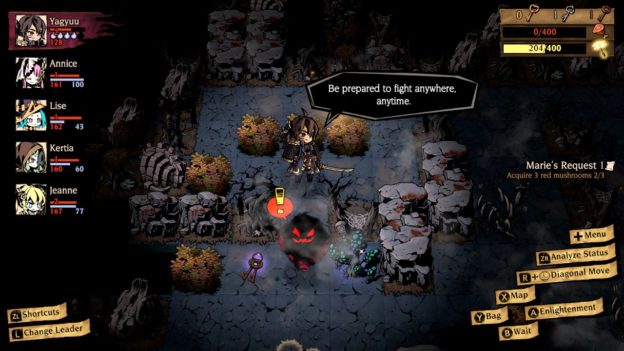 There’s a lot to learn about the battles. The attacks and status ailments from the various classes are hard to keep track of, but everything is on the screen to help you out, which was nice. I had a tough time in the beginning when my characters were level one because the enemies seemed much stronger than me. When my team made it to level two, the game became so much easier, making the difficulty of the levels seem off-balance.

For an RPG, the battles are not the heart of the game; exploring is. Once you accept a mission, you head to that area, which may be different parts of the forest, and you’re in a dungeon-like place. The area is built as a grid where you can walk in the four main directions. Your team has hunger and luminosity, and with each step you take, these numbers go down. If you get to zero hunger you begin to take damage. 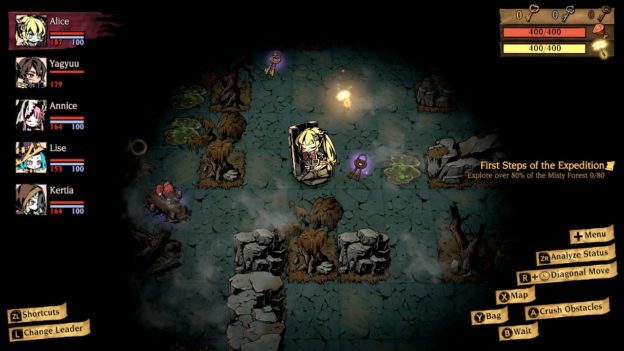 There are items you can bring with you such as food to replenish your hunger. There are also potions to replenish your luminosity so you can see more of the dungeon. However, there are luminosity flowers scattered about the dungeon. One of the goals is to light all the flowers. There are also bronze, silver, and gold chests lying about with their respective keys in various spots as well. This is something else you need to collect (and you’ll want to because some good items such as weapons and armor may be hidden inside).

In addition, there are areas of debris you need to rummage through which will also have good items, but as you break down the debris you’ll lose a little health. There are traps hidden about, and enemies will lurk around as well. The enemies are easy enough to avoid, but you’ll want to battle as many as you can so you can gain experience and level up. And no, you don’t gain experience after each battle, it’s only after you complete a mission. So, if you lose, you lose everything. If characters die, they’re dead for good and you need to recruit more members. 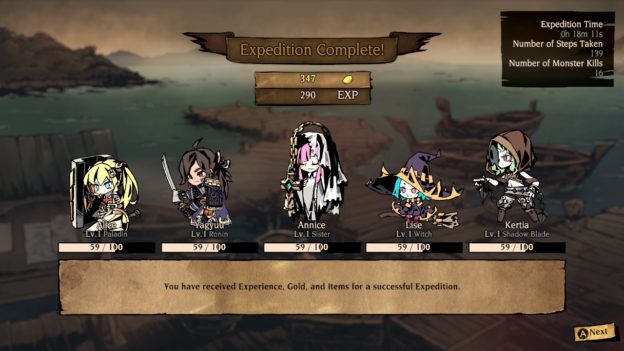 This seems like a lot to do in these dungeons, especially since you don’t know how many flowers or chests there are. You need to explore every nook and cranny. This can be difficult because you lose four hunger with each step you take. You can only buy five food at a time which replenishes 160 food, and your max is 400. Sometimes you’ll find food through the debris, but that seems random as it doesn’t happen too often.

The first dungeon I went in, I didn’t get everything. I started to get hungry, and the enemies were killing my team since I was still level one. I found the exit and left immediately. A clock then appeared on screen and ticked down a lot. Apparently, the less you collect (chests, flowers, and debris) the faster the clock will tick. If you collect everything the clock won’t tick at all. Once time runs out, the mist takes over and you lose. At least, that’s what I assume. I was too afraid to test it out. 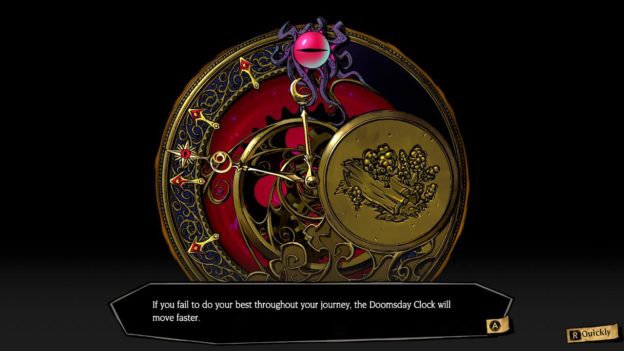 There’s a lot to learn in this game and even more to keep track of when you start playing. The idea of the game is a cool concept, though nothing was really explained so I felt as though I had wasted my first dungeon because I didn’t know I had to get everything. After that, I spent so much time exploring dungeons that I’d run out of items and food or my team would be near death from lack of health potions and I’d be forced to leave early.

The overall feel of the game is good. I enjoyed the graphics and music, and the controls were smooth. The battle system and dungeon system were good as well, but it just wasn’t my cup of tea. I felt as though there was too much going on and it couldn’t hold my attention for long. Plus, every mission was similar, just in a different area. It got quite repetitive after a while. 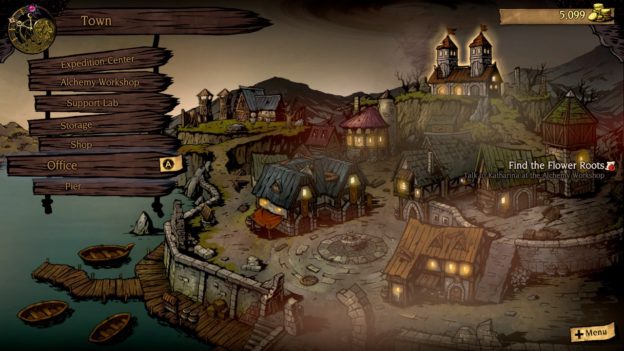 The narrative and characters seemed dull to me as well. I can’t put my finger on it, but I didn’t feel anything for any of the characters. I felt this game would have been better off without an in-depth story. Maybe I’ll go back to the game someday and try to get farther into the story, but for now, I need a break. It was just an okay game for me.

MISTOVER is an RPG that’s fun in the beginning but quickly becomes repetitive. While there’s a lot to do in the game, it’s also a lot to learn.