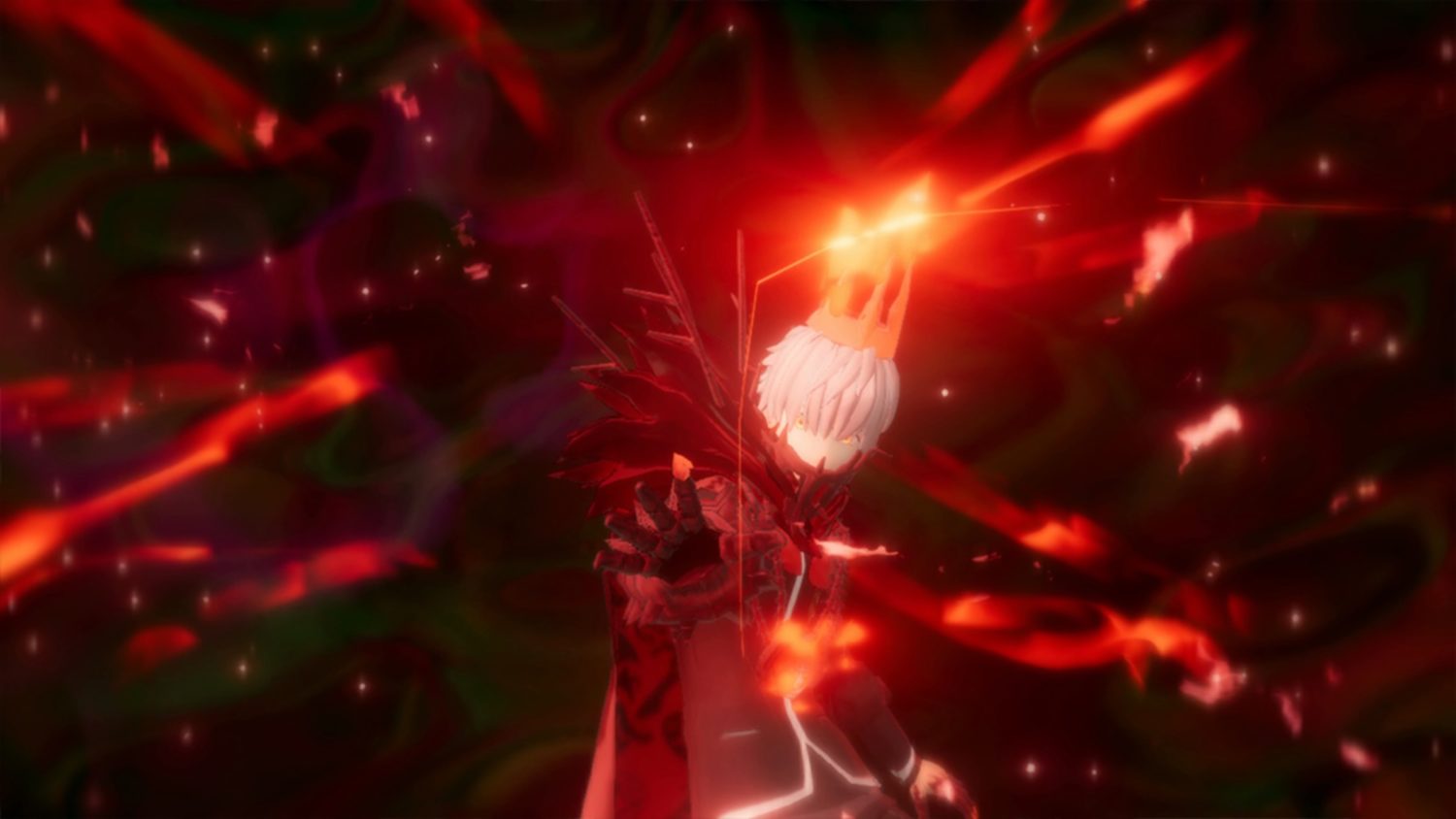 And you thought YOUR high school was rough.

I’m somewhat embarrassed that Monark caught me so off guard. This turn-based SRPG is published by NIS America, after all, and they tend to focus on games that sit outside the fringes of their defined genre.

Perhaps it’s the visuals that initially clouded my expectations. In fact, I’ll start with that so I can get my only major complaint out of the way. The graphics in Monark wouldn’t have looked good on the Wii U—possibly even the Wii. The environments are drab and lack the type of detail we’ve come to expect on the Switch. There’s an appropriate eeriness about them, but this could’ve been much more effective if the characters and environments weren’t so flat and lifeless.

Once you get past the visual presentation you’ll see quite a few cool elements hidden beneath the murk. And as you’d expect from a team composed of developers from the early entries of Atlus’ Shin Megami Tensei and Persona franchises, there’s plenty of style throughout.

The game kicks into gear immediately with a battle you can’t win, and only after you “die” does it bother to explain things. Kind of. There’s already a mist causing your fellow students of Shin Mikado Academy to go mad. This mist somehow prevents everyone from leaving the premises. 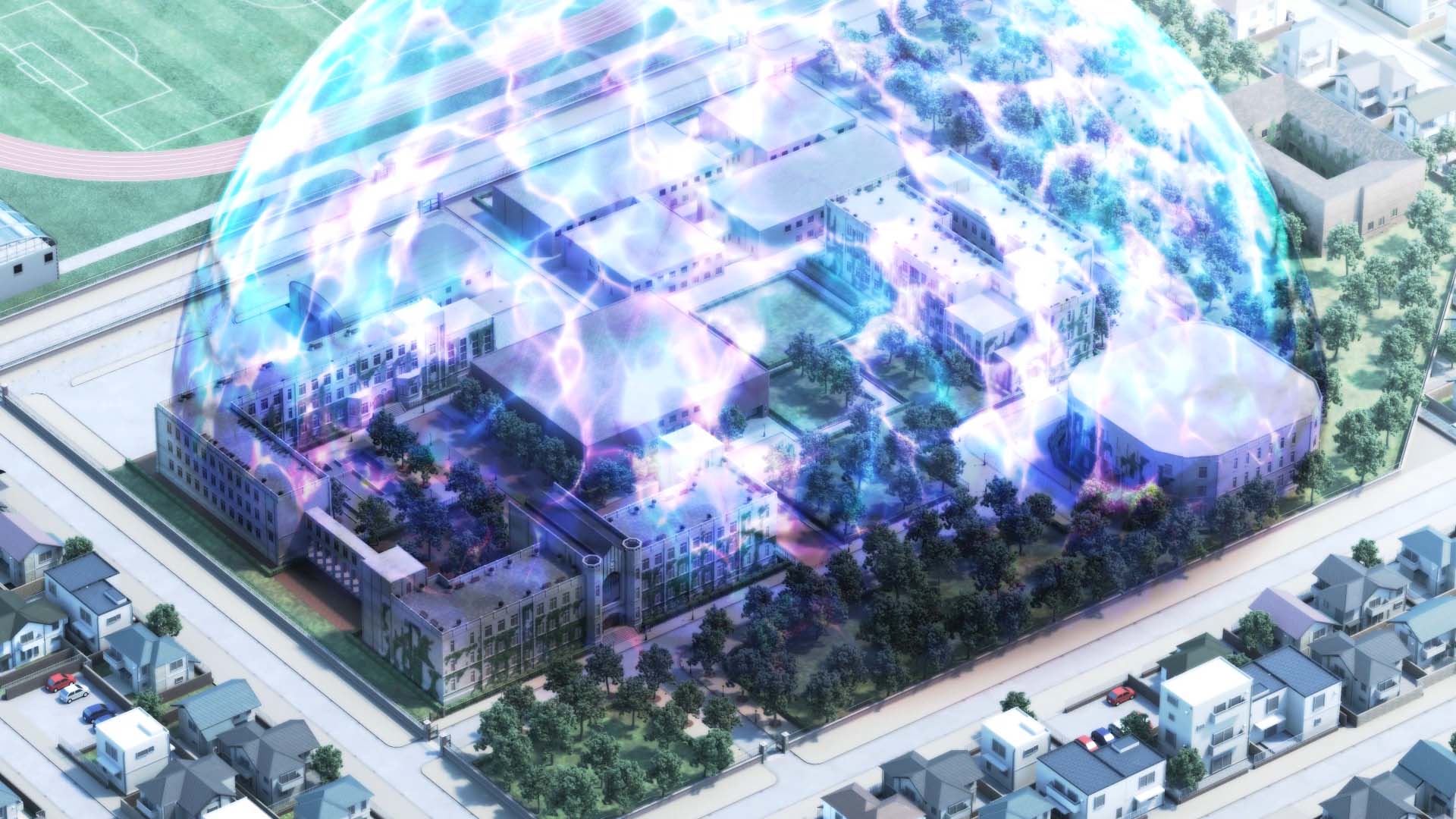 So, you can’t leave, and you’ll lose your mind if you stay. Welcome to high school, I guess.

Some people do have a vague idea of what’s going on, but not everyone wants to help. In fact, there’s a (disputed) student council president who has seemingly been using the mist to create his own little cult of followers. What’s his goal? Well, figure out what’s going on and you’re sure to figure that out, too, right?

As you’d expect from a turn-based SRPG, you’re not alone in your quest. Good thing, too, because whatever it was that “killed” you early on has also robbed you of your memory. You’re quickly paired with another student, Nozomi, who knows who you are and seems to be pretty level-headed about (if not terribly frightened by) the situation. You’ll also meet your sister, some faculty members, and a quirky/cute demon that’s reluctant to be helping you, but only Nozomi goes into combat with you at the start. 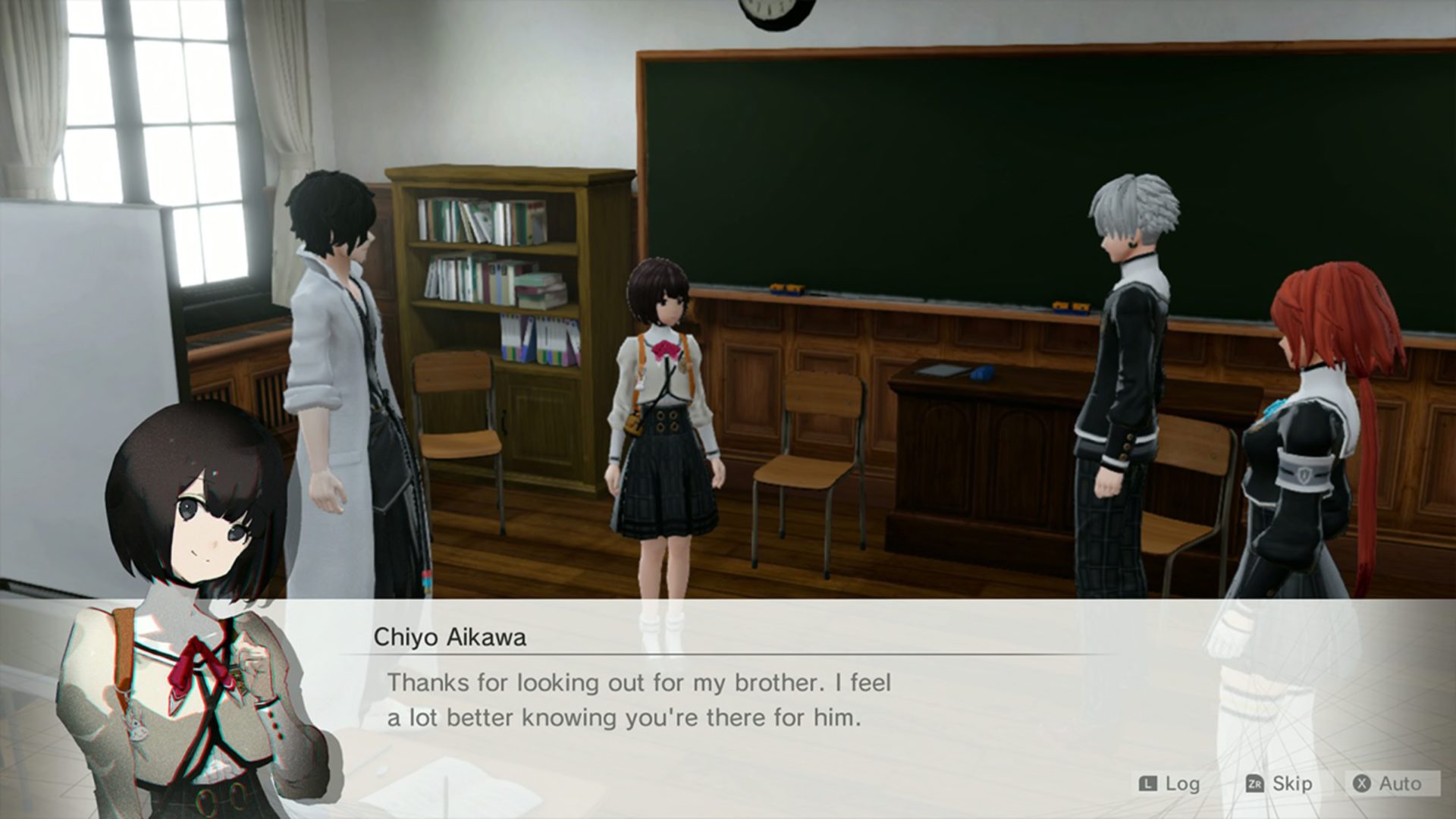 Well, Nozomi and a fiend. Monark quizzes you at the beginning and provides you with a fiend that matches your “ego.” This odd skeleton/cyborg/demon mash-up appears during battles and can be used like your standard party members in JRPGs. Party members and fiends all have skill trees to manage as you progress. You’ll use these trees to level your companions up according to how you prefer to use them. The skill tree does allow you to backtrack if you want to try something else. This comes at a penalty, however, so you’ll want to try to get it right the first time.

Skills, as you’d expect, are important to Monark’s battle system. But before we get there, let’s talk about exploration. New areas of the Shin Mikado Academy are opened by the plot, and you’ll need to wander the mist-filled hallways to clear them out, finding notes to learn more about your fellow students as you progress. The longer you’re in the mist, the higher your madness level becomes. That’s mostly a bad thing; it leads to battles that are difficult to win, but you can avoid them through an odd system of phoning your way into the Otherworld. Whether you take the hard battles or the simpler ones, you’ll eventually work your way to a Pactbearer and its “ideals.” These must be shattered in order to completely clear out the mist and free the students from its induced madness.

Wandering the dark halls and viewing the crazy students can be pretty chilling, especially with a decent amount of haunting audio cues. There are a lot of puzzles, too, and they’ll need to be solved before you succumb to the madness or are able to retreat to a safe zone to rest your way back to health. 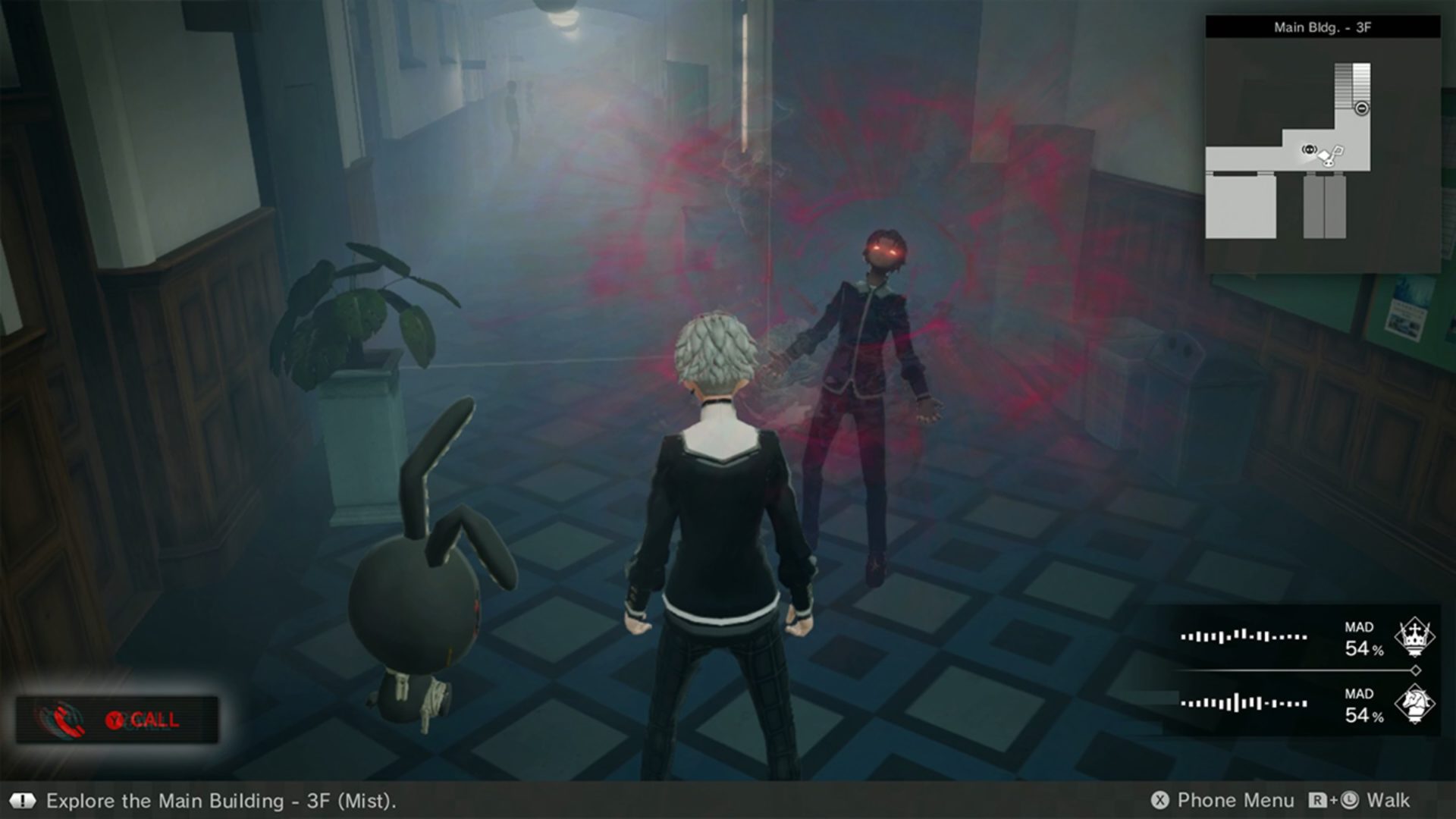 That madness carries over to the battles. Your attacks generally involve either lowering your health meter (Arts) or raising your madness (Authorities). If you completely give in to the madness, you’ll generate very powerful attacks, but you won’t be able to control them. This, obviously, could lead to friendly fire. However, if you’re able to align with a companion, the “mad” character will become “enlightened.” This allows that character to use its skills at no health or madness cost. As such, the game becomes a balancing act of remaining close to going mad without doing so until the timing is absolutely right.

Placement is also important to combat, and you get a certain amount of control over where you move your characters. Attacking from behind produces guaranteed hits and critical damage, while attacking from the front can trigger counter attacks. Having an ally near when you attack will allow that ally to get a blow in as well, but it means the enemy can hit both when it attacks. 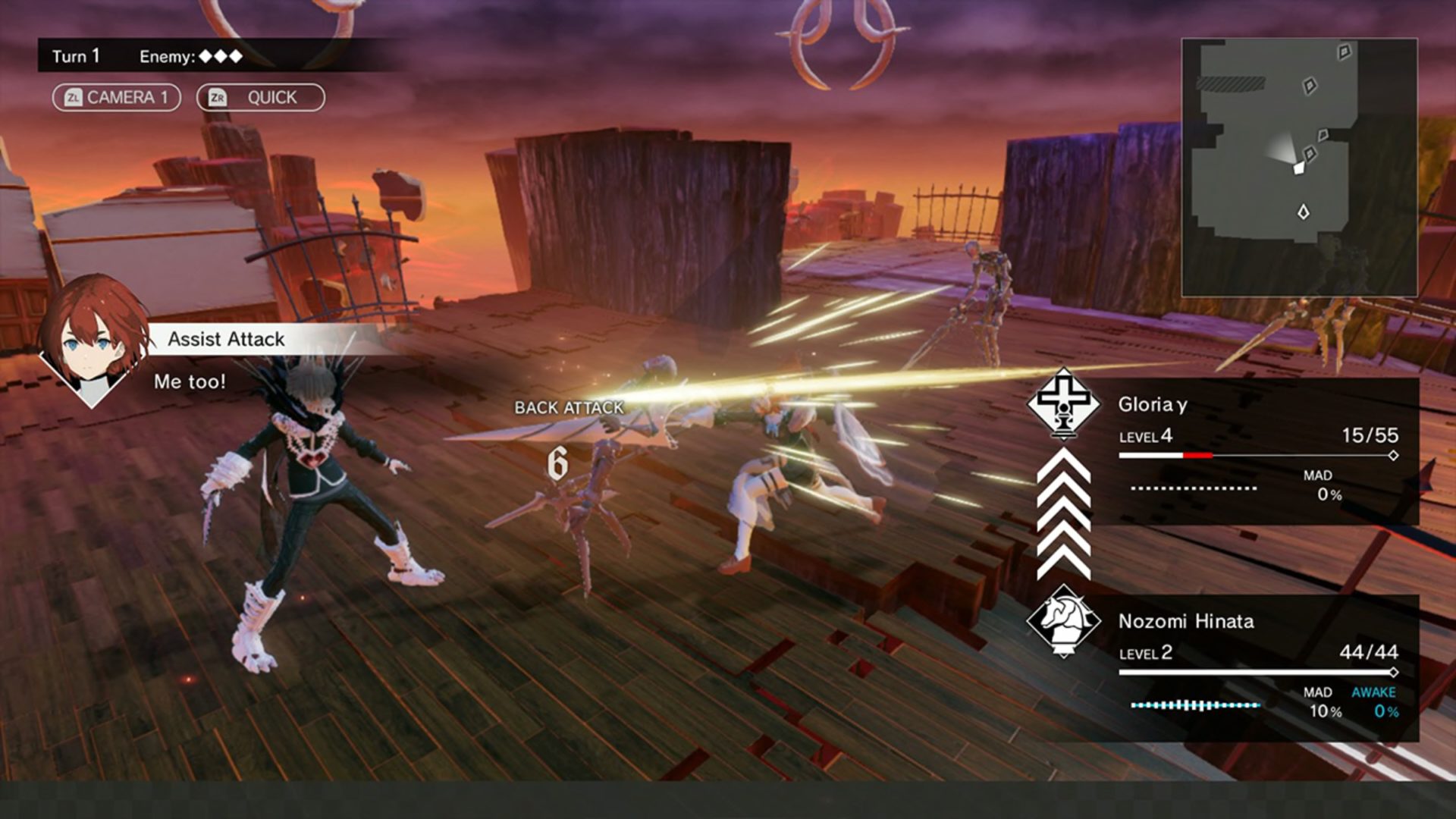 Although there’s plenty to think about in the battles, they mostly move along pretty quickly. This is good, because you’re ranked at their conclusion. The higher your ranking, the more “spirit” you get for leveling up your characters. Oddly, your ranking is based on some elements you may not really need for certain battles. Also, the in-game tutorial doesn’t do a good job of explaining how certain parts of the battle system worked, and your ranking will suffer if you don’t utilize them. I therefore found myself repeating many fights to just master the battle system and improve my ranking.

OK, so that’s “kind of” just level grinding. Fine. Except that moving from building to building at Shin Mikado Academy does little to change the scenery. Combat doesn’t change much either, so repetition does set in. The need to repeat so many battles therefore interferes with the otherwise engaging narrative.

Whether you’re able to push through the sluggish moments will depend upon whether you’ve been hooked by the game’s unique combat system or dark story. It helps that we get a Demon Slayer-like history of the Pactbearers upon defeat, as it makes the boss fights a bit more rewarding. And although moving to a new building doesn’t alter the game much, it still conveys the feeling that you’re making progress.

I think I would’ve liked Monark more had it been released for the 3DS, where its limited scope and dated visuals would’ve been easier to mask. In fact, playing this game in the Switch’s handheld mode may be the way to go for that specific reason. I imagine the game’s style and tone will attract a rabid fanbase, and it deserves that; I enjoyed a good amount of my time with it. But I also imagine many gamers will lose interest before reaching the end. Grab the demo and find out on which side you fall.

Monark has a refreshing battle system that will appeal to turn-based strategy gamers, but the dated graphics and overall redundancy make it a hard game to recommend at its full asking price. As with the game’s dangerous Mist, enter with caution.