Mothmen 1966 is the first of Pixel Pulp’s anthology of indie visual novels that arrived on consoles and PC this year, with Varney Lake continuing later this year. I, for one, cannot wait! Mothmen 1966 is heavily inspired by Pulp Fiction and 1980s home computer games, and tells a short tale of horror and humor through the use of light puzzles, choices that affect your story, and a bunch of interesting graphics and sounds. 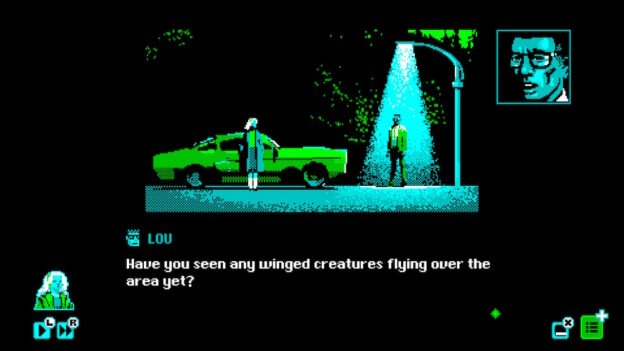 The story follows four characters, Holt, a gas station owner, Lou, an investigative writer, and a young couple, Lee and Victoria. Of the four, you alternate between Lou, Lee and Victoria each chapter, seeing the story unfold from their perspective and making decisions for them. On the night of the annual Leonid Meteor Shower, these four people cross paths on what ends up being a very interesting evening. The narrative differs slightly when faced with choices or minigames – the outcomes of which can alter the following dialogue, or result in your death!

One of the key areas that stood out to me was the pixelated art style. These illustrations are stunning and coupled with the eerie and unsettling tones (more on this later), create a wholly unique, creepy, and sometimes comedic atmosphere. Both of which hit home when needed. The deep black background and borders remain throughout the story, with the remaining pixels sticking with greens and blues, and sometimes blood reds when the scene requires, ensuring a striking visual. I took many screengrabs in anticipation for this review, however couldn’t use many of the stunning visuals, as I didn’t want to spoil parts for those reading. 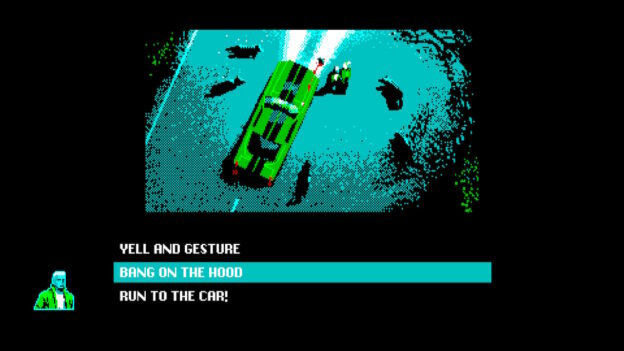 The sound design is great, but also problematic in ways. There is an underlying static/frequency-like noise that plays out through most of your time with Mothmen 1966, which is then accompanied by some very uncomfortable sounds in times of terror and danger. They are uncomfortable in the way that it is a highly irritating noise. So much so that as I played this with my fiancée beside me, she politely requested I ‘turn it down, or turn it off!’ Some sounds however didn’t quite hit their mark and there was a slight inconsistency in the quality. Barks sounded more like the noise you hear in a gameboy game when you hit a wall you can’t pass, whereas a car engine was pretty clear to make out. More often than not though, the use of sound helped set the tone for each scene you were faced with, and really did draw me in further than I imagined I would. 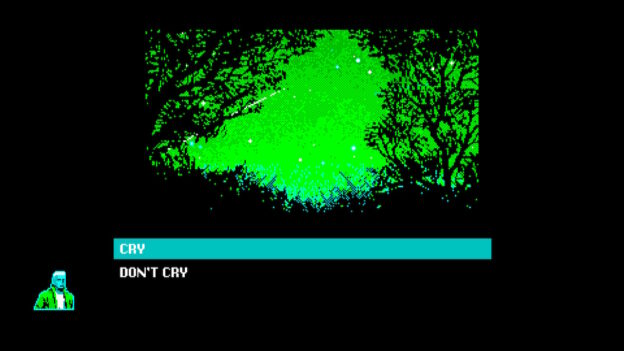 Like many visual novels, Mothmen 1966 offers plenty of reading. Thankfully though this is broken up often with dialogue choices and puzzles/mini-games to help progress the story. Puzzles include everything from trying to figure out a way to escape wild coyotes to literally figuring out a Rubiks-like puzzle. Most were simple enough if you took your time, however the latter mentioned was extremely difficult. Luckily, Lou was on hand to solve it for me (the only time assistance is offered to you). This puzzle may have been easier if the controls were a little more friendly. When navigating any kind of puzzle or mini-game, your controls or navigation do not enter the screen displaying the image. Instead, you’re given a list of options, such as ‘move to the left’, ‘rotate the middle right piece’, ‘shoot!’. Not the most friendly of control options.

Given the unique look, feel, and sound that Mothmen 1966 has, I imagine a number of players may be turned off early with its pacing. I felt that way, too, however, I slowly became more and more invested in these characters as the story progressed. Despite the horror-like narrative, Mothmen 1966 is layered in many tongue-in-cheek moments and some of the visuals attached to certain lines are genius. The overall story is bizarre, irreverent, and just screams B-Movie to me – and if you know me, that is very much a compliment! I am saddened that it only took me just over an hour to complete the entire story… oh quick tip, make sure you watch the credits to the end! 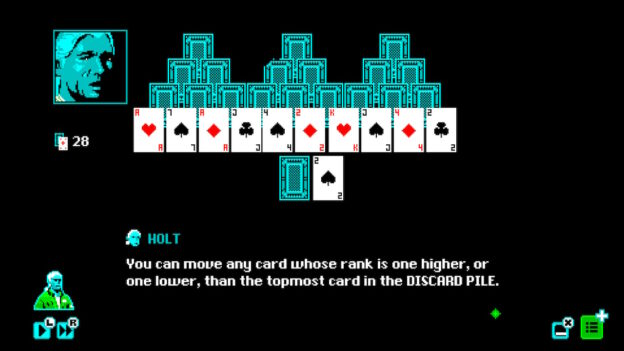 Once you have completed your first run, you will have unlocked two additional areas. These are Gallery and Solitaire. WIthin the Gallery, this will display unique occurrences you encountered during your story and highlight areas you did not. It’s a great way for you to track and go back to see what else you can uncover throughout this wonderful, albeit very short, story. Within Solitaire, you, well, play Solitaire. The story opens with Holt mid-way through a game of Impossible Solitaire (don’t worry, the rules are explained to you within the main game), and once you pass this section of the story, you can dive in and play your own games whenever you want! I personally would recommend just grabbing a real deck of cards, due to the unnatural controls to play a card game.

Mothmen 1966 manages to blend a creepy yet oh-so-fun tale into the visual novel formula, with a sprinkle of choose-your-own-adventure and puzzles to create a retro story that I had a really, really fun time with. Despite the clunky controls in the puzzle sections, Mothman 1966 has more than enough to entertain you in its bitesize narrative – I only wish there was more! Thankfully, LGB Game Studios has announced Varney Lake coming later this year. Sign me up!