Given my fondness for a good point-and-click adventure, I was excited to explore Mr. Pumpkin Adventure. When all is said and done, I’m satisfied with the game. As a Wii U eShop port though, it comes up short in a couple of key areas. 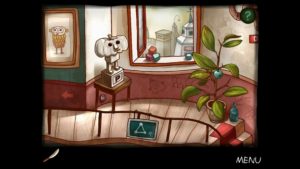 An early scene in the Vegetable Kingdom.

The adventure takes place in the Vegetable Kingdom, with the smartly dressed Mr. Pumpkin trying to piece together incomplete memories. There’s no voice acting, but the story is primarily delivered in between chapters in comic-style fashion. There are also plenty of scattered diary entries to find, which flesh out the tale. 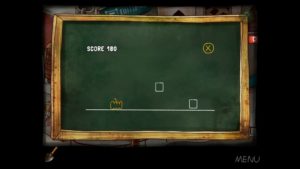 Need a hint? Try your hand at some simple platforming.

The puzzles, while satisfying to beat, are a bit heavy-handed in the math variety. I felt this was important to note, so be informed. There is a hint system, which thankfully is designed in such a way as to not just give you solutions. You’ll first need to beat a platforming mini game. Even then, the clues can be cryptic. 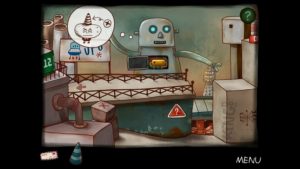 A puzzle (just don’t look for help on Miiverse).

Not being able to attach Miiverse screens however, is quite problematic. This is one of the key areas in which this port of Mr. Pumpkin Adventure falls short. To be clear,  I would dislike this regardless of the title, but games of this genre would especially benefit from the normally standard feature. I was unable to get an answer from the publisher as to why this was disabled, but it absolutely does negatively impact my score some. 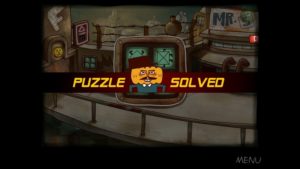 Issues and all, puzzle solving is satisfying.

Another way this port detracts is by how inconsistent the GamePad is with its handling of audio. Sometimes it mirrors the TV, nicely playing both music and sound effects. Other times however it goes silent, save effects only. Why is that?  The music is good by and large, so this further lack of polish is a real shame. It makes Off-TV play a hit or miss option. 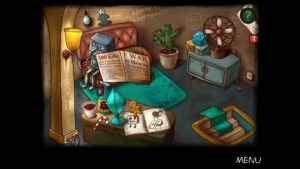 Imagination is on display in each visually arresting scene.

The “50 exquisite game scenes” are spread across 9 chapters. All told it took about 5 hours to beat, for whatever that information might be worth to you. It’s certainly a good amount of content for the inexpensive price of $3.99. Different endings add some replay value that otherwise would be absent. If you’re a genre fan, I wouldn’t worry about the game holding your interest from start to finish, especially with its colorful and imaginative visual style. I wonder how Mr. Pumpkin’s travels through the Vegetable Kingdom might fare as just a straight up visual novel?

Mr. Pumpkin Adventure is a pretty good game, but it’s transition to the Wii U has been subpar. It’s still an easy eShop purchase for genre fans like me, but others might prefer to take more of a wait and see approach. I would enjoy seeing a sequel down the road, one retaining the visual style while bringing more puzzle diversity and polish.

Mr. Pumpkin Adventure is a pretty good game, but it’s transition to the Wii U has been subpar. It’s still an easy eShop purchase for genre fans like me, but others might prefer to take more of a wait and see approach.