Ever since the first screens for Muramasa The Demon Blade were revealed, this game has had a lot of attention. Maybe not as the most popular game in the world, but certainly the best 2D graphical presentation of any game this generation, or ever! The artists at Vanillaware did an amazing job, but does the gameplay/story hold your attention long enough to see all the beautiful areas? 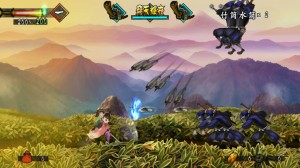 I first played Muramasa at this year’s E3. It was one of my most anticipated Wii games of 2009 and it didn’t disappoint. Even from the short, 10-minute demo, I was able to get a good sense of how beautiful this game is in action. Just simply running through wheat fields was a euphoric sensation. I found myself running back and forth just to see the sun peaking up over the hills in the distance and creating a flare through the wind-tossed blades of wheat. Now that I have the full game, I was able to dig much deeper into the game, which, on the surface, appears to be perfect in many ways. 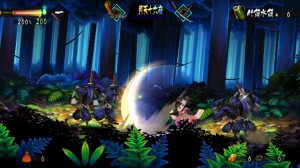 The game’s storyline is split into two paths: one for Momohime (the female character), and one for Kisuke (the male character). Momohime has lost her soul and is now possessed by a demon with ill-intent (naturally ;) ). Kisuke, on the other hand, has lost the memory of his past and is on a quest to figure it out. That may seem very basic, but the story unravels with many different characters and is steeped in Japanese mythology/imagery. It gets pretty hard to follow at points, but it’s a basic concept overall. The game can also be played in two different difficulty modes: one normal, one hard. 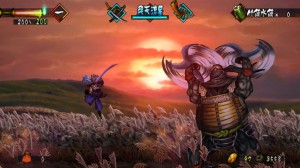 Graphically speaking, Muramasa transcends most games on the Wii–that’s including games with a 3D perspective. All the characters, enemies, and environments are all in a beautiful hand-drawn style. The environments are very realistic and it feels like a book that’s come to life. Depth of field is something that is used very well in the game too. some areas will have 6-7 layers of graphics scrolling in the background as you run. So you may have multiple layers of waves, rocks in the distance, clouds moving, sun setting with solar flare, all with full battle animations with enemies in the foreground! It’s really hard to describe unless you see it in motion. 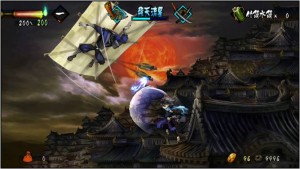 The gameplay is a mix of classic 2D platformers, hack-and-slash, and RPG elements. You move around the levels in a series of ‘areas’ or ‘rooms’, similar to Metroid or Castlevania games. Your character encounters battles at different points throughout the areas and it closes the section of the area as sort of a battle arena. So you encounter a bunch of enemies and get to fight them just on the current screen area until they’re all dispatched. Then you receive experience points (XP) based on the battle and combos. It’s all very fast-paced, but not so much that it’s hard to control accurately in battle. In fact, once you’re used to the speed of the action, you’ll be linking combos that are 100 hits or more!  You’ll also be able to switch between items and 3 swords during battles very easily, which is very handy in some of the more hectic fights.

Muramasa is a diamond in the rough of Wii games today. It’s classic gameplay and polished 2D visuals make Muramasa one of the few games that doesn’t sacrifice quality just to cash in a quick buck. The depth of detail in Muramasa The Demon Blade is staggering, and you’d really be denying your eyes a treat by not checking it out. While the game isn’t for everyone, it’s definitely worth playing and seeing for yourself.