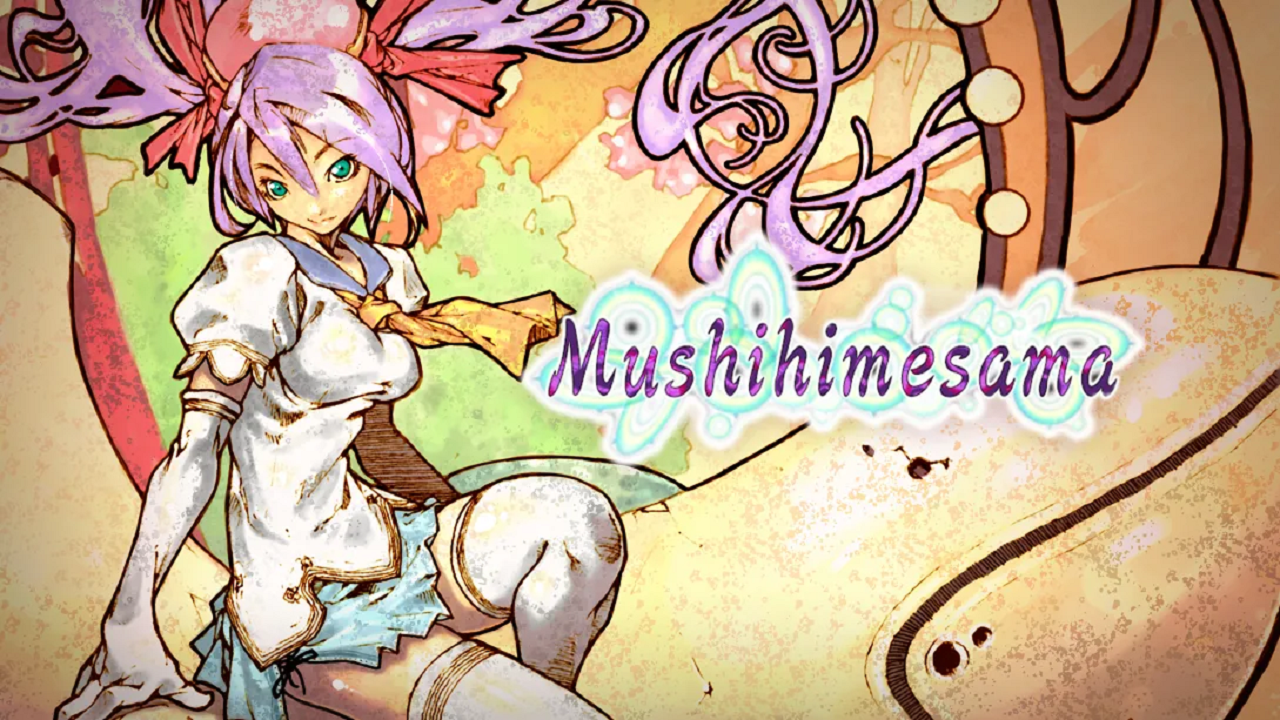 I’ve always been a huge fan of games that involve a lot of dodging. Naturally, this has led me to enjoy shmups, like the Thunder Force series. However, I’ve surprisingly never played a manic shooter (aka: bullet hell) before. MushihimeSama marks my first experience weaving around hundreds of pink bullets with a ridiculously small hitbox. So, how is it? 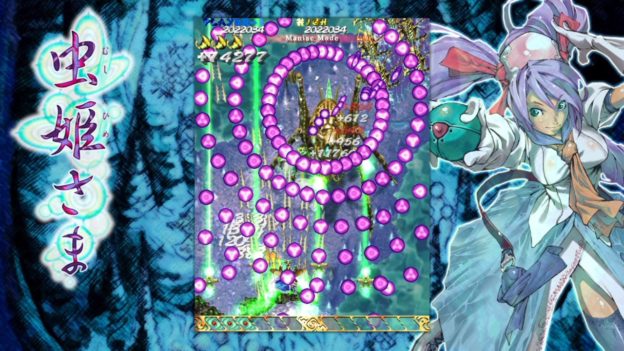 MushihimeSama is a manic shooter from the fan-favorite company Cave. You play as a girl on a bug shooting down a lot of other bugs; the plot really isn’t that important here. There are actually four different versions of the game included: Novice, Normal, Arranged, and Ver 1.5. Each version has quite a few differences, but in short, Novice is easier, Normal is normal, Arranged is crazy hard, and Ver 1.5 is a slight refresh of Normal. I must say that even in Novice mode, this game is really tough. I couldn’t even beat Novice without using continues (please leave the obligatory “I can beat Novice with my eyes closed” comments below). 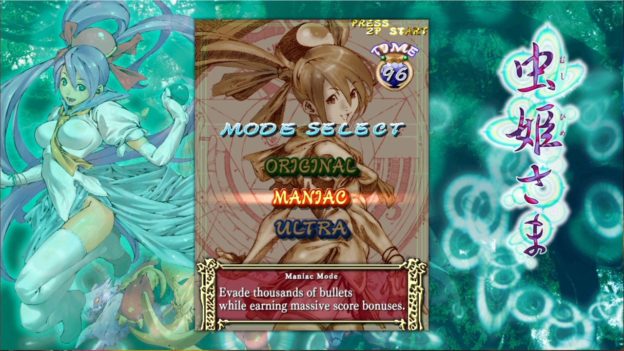 Besides the four versions, there are three difficulties available for each mode, except for Arranged. I like how when you choose the hardest difficulty, Ultra, a menu pops up asking if you’re “prepared to battle sheer despair”, which definitely sets you up for what you’re about to face. The good news though, you have unlimited continues to use if you ever happen to run out of lives, so even I was able to beat the game. With only five stages, the game is actually fairly short, clocking in around 20-30 minutes a playthrough. 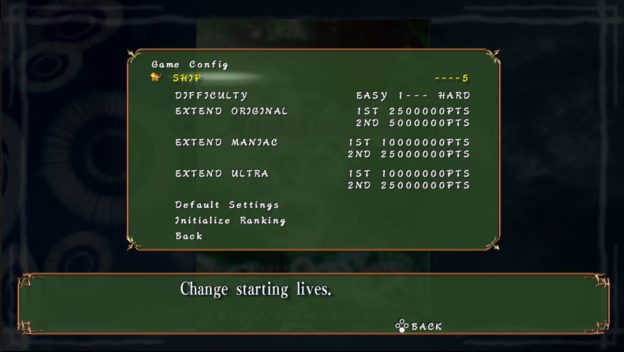 That short playtime should not stop you from playing though. After starting up my first round it became quickly apparent that there’s a reason Cave is so highly regarded for their manic shooters. The experience is top-notch, and I honestly have very little to complain about as regards the base gameplay itself. I loved my time here dodging and firing, and there’s a great soundtrack accompanying the experience. And being that it’s an arcade game, you’re going to want to play it over and over again to try to improve your score and skills. Despite how good the game is though, I do have some complaints about the overall package 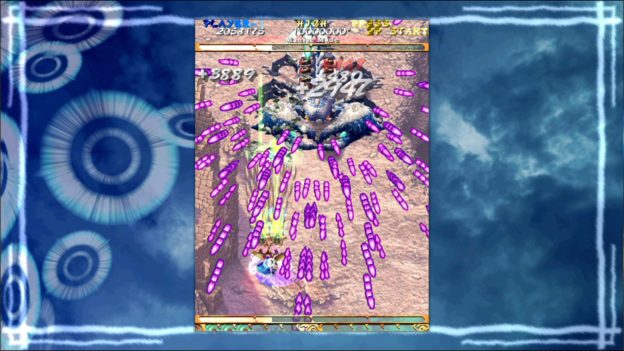 First, this game is just begging for some kind of manual. As I mentioned earlier, the four versions have quite a few differences between them, but there’s no explanation given outside the names themselves. There seem to be slight scoring differences, and powerup differences, but those are up to the player to figure out. There were even some things I never ended up figuring out. Why does a little circle appear over my character when I hold fire? I don’t think it’s your hitbox, as I’ve seen plenty of bullets fly right through it. I also never got to use the Leaderboards option, it has always been greyed out for me. Even on the official eShop page, it’s greyed out in a menu picture! How do you access it? I don’t know, it doesn’t tell me! 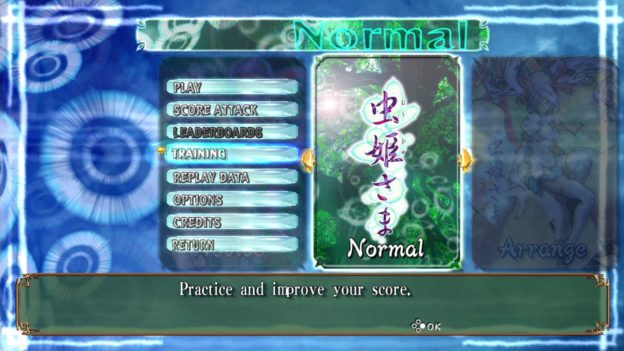 Secondly, the slowdown, something that has always been a gift and a curse to me in shmups. On the one hand, it makes dodging significantly easier. On the other hand, it can make some levels drag on for quite a long time, and if the slowdown suddenly stops while you’re carefully maneuvering a storm of bullets, it can lead to a cheap death. Don’t get me wrong, I 100% understand why this game lags, I mean, there’s got to be thousands of sprites on screen at points, but it was an issue that I found detracted from the experience. 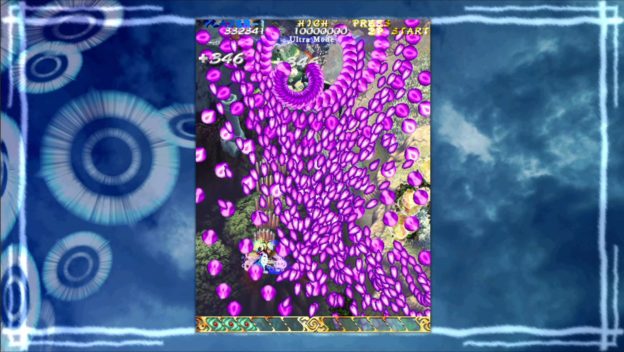 Overall, though, those are only two issues in an otherwise fantastic game. I had an absolute blast playing this, and I’m sure shmup fans will too. It’s even got numerous options for more hardcore players, like screen rotation, a Training mode, and optional additional windows for displaying additional score info, or a zoomed-in view of your ship. MushihimeSama is a first-rate manic shooter that comes highly recommended.

While there are a few nags in the overall package, MushihimeSama is a fantastic shooter, and one I’m glad I won’t have to write the name of any longer.