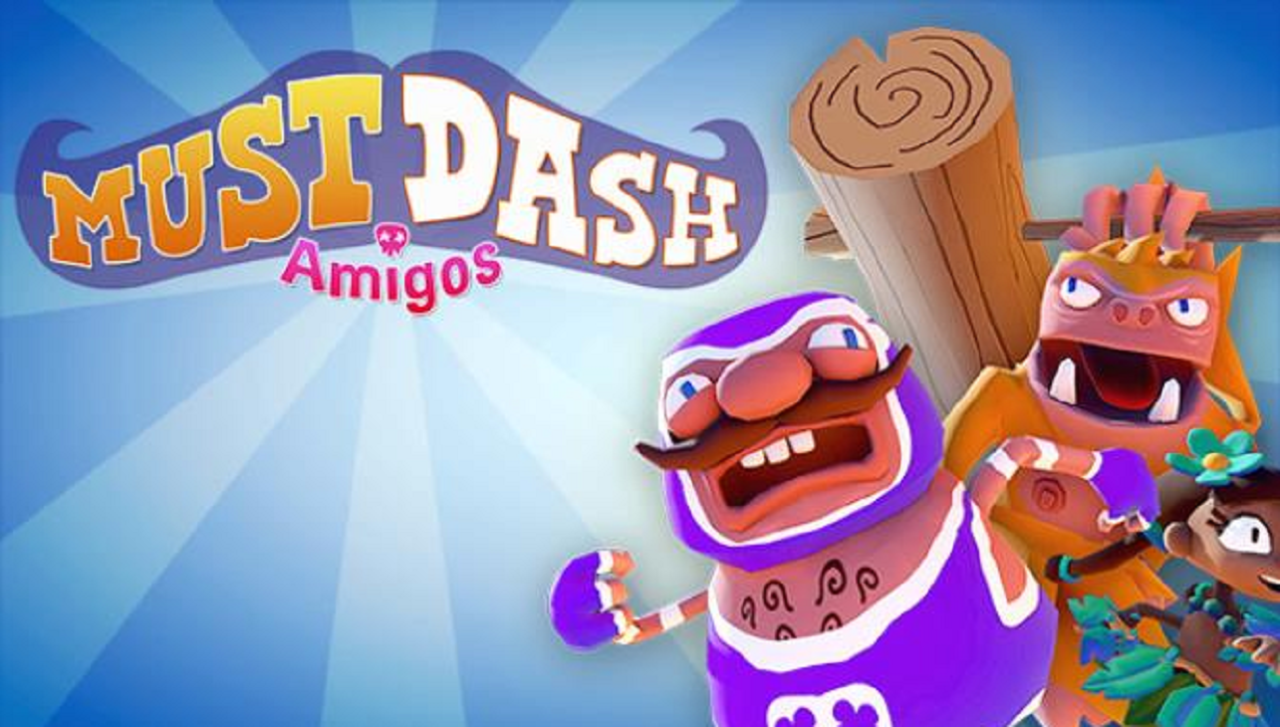 At first glance, Must Dash Amigos seems like it might be a runner where you just control directions and use items. And then while playing on your own you realize it is more like a Mario Kart type of game where you race other players to see who can get through the course first. But upon playing it multiplayer, you find the screen isn’t divided for each player to have their own and is instead one big screen. This is what my experience was, revealing an interesting game after peeling away the initial judgments to compare it to others.

I began playing the options single-player had to offer, which were Time Trials and Challenges. Time Trials are self-explanatory so I won’t go into detail about them, but I will discuss the challenges, which were interesting and, well, challenging! Must Dash Amigos has three different types of challenges – running away from a stampede, running to catch a pinata, and guiding two amigos through a level in the allotted time.

The thing is, it seems to me that it’s entirely up to chance whether or not you can beat these challenges. In the challenge levels, there are golden pinatas that have items to make you boost, turn invisible, and even a bomb that does nothing except blow you up if you fail to discard it, to name a few. These items hold the power to determine if you can win or not. If you don’t get the items that can speed you up, you’re likely to lose. Not to mention there are some obstacles, like cars running you over, or arrows shooting at you, that can slow you down enough that if you mess up you need to start over. Not to mention the controls in this game are slippery, which made it very hard to control one, let alone guide two amigos through a level while keeping them both on screen! I was very confused controlling two players at the same time, using and discarding items, and trying to do all that in the timespan.

On a more positive side, multiplayer is much more fun. The races, whether individual or a tourney, are frantic and enjoyable. You have to stay on screen since you’re sharing the same screen with everyone, so if you lag behind you’re eliminated. I played with one other player at first, and during that time I imagined how crazy it could get with four players, crazy in a good way. And when I finally got three other players to join me, I was right! It was a lot of fun, but it also made me realize how this game isn’t easy for the casual gamer, and that sometimes it can be hard to tell if you’re holding an item. But the battle mode was disappointing and, again, was held back by the slippery controls, which made it hard to aim at another player.

This review seems more negative than not, which is unfortunate because I do think Must Dash Amigos has the potential to be great, and it is fun despite its issues. The humor (I mean come on, there is a pun in the title), character design, and style of this game make it stand out among other racing games. It’s priced at $17.99, which is too much, but if it’s on sale and you’re looking for a fun party game I would say go for it.

Must Dash Amigos is an enjoyable title if you can overlook its flaws. Great for multiplayer, but not so great when played solo.