Boomshakalaka! NBA Jam is back and better than ever on the Wii! The SNES classic that showed us basketball games can be made fun albeit a little unrealistic is back on the Wii with the same personality of the original. You’ll immediately feel at home with the announcer’s comical remarks like “Oh, he just stuffed it like a Thanksgiving turkey” and “He’s on fire!” Check out the full review to see why you must own this instant classic.

NBA Jam features some basic gameplay—it’s 2 on 2 basketball where the only real rule is no Goal Tending. Anything else goes, pushing, shoving, and slamming down huge dunks. The controls are simple and come in two varieties. You can play with the Wii remote and nunchuk or you can opt for a more classic feel with the Classic Controller. So if you’re used to the old-style SNES controls, you’ll feel right at home. I like the inclusion of Classic Controller support, but as I played, I now prefer the Wiimote/nunchuk style the best. You simply use the Wii remote for all shots/dunks by moving it up in the air, and then down when you want to release the shot or slam the dunk. All other moves can be broken down into stealing on defense with the ‘B’ button, passing with the ‘A’ button, and turboing with the ‘Z’ button. 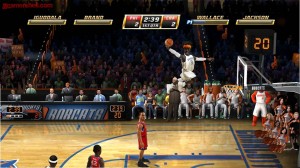 One can play through the game’s Classic career mode where you’ll go through and play all the teams in the NBA. There are also other modes that emphasize more over-the-top gameplay. But by far the most fun that can be had with NBA Jam is in multiplayer. Get 4 friends together and play some 2 on 2 is incredibly addicting and tons of fun. I’ve played more hours in this game than a lot of multiplayer games on the Wii. The fact that there’s no online multiplayer is a downer, but it’s really not that bad since it’s the most fun when you have everyone together in a room playing.

Overall NBA Jam exceeded my expectations more than I thought it would. I don’t know if it was quite worth the $50 price tag, but once the price comes down, it’s definitely worth all the hours you’ll have playing with friends.