Aside from its rogue like elements, this game’s other main gimmick is the permadeath feature. Meaning your goal is to make it as far as possible before your sudden, inevitable demise. Suited to the name, permadeath is a dangerous mechanic to put into games. Handled improperly, and your difficult game simply becomes frustrated and annoying. Thankfully Neurovoider see’s what works in a game where death is the be-all and end-all, and manages to craft a fun and addicting experience.

The game also blends in RPG elements through the random equipment that is dropped throughout the levels. Save for the guns, most of the equipment is specialized for a specific class. Unfortunately, the loot dropped won’t favor equipment for your class, and you can go a few rounds without seeing anything new or useful. Since you lose everything after death, unless you are playing co-op, your only option is to sell them. The money you make scrapping useless equipment can go towards upgrading the equipment you have now; an essential strategy in the late game. Neurovoider also goes down the Borderlands route of having a huge variety of guns, with their own aesthetics and stats from their design to the type of ammo they fire. 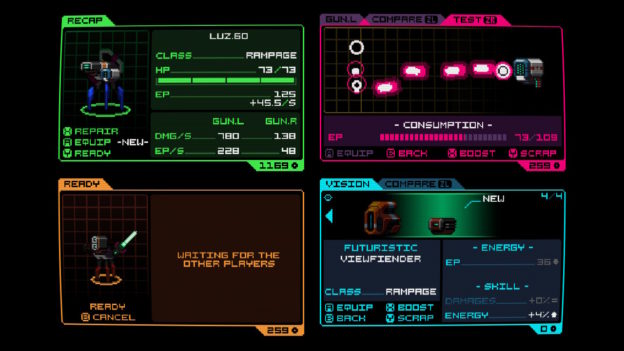 Before you begin your campaign, you choose one of three classes, each with their own unique abilities and stats. Each class feels different enough so players cannot get through the campaign using a single strategy. The tank is great for area of effect damage and defense, while the slasher is good for getting in and out of the action quickly. Along with your class, you can choose one of a wide variety of abilities, running the gambit of offense, defense, and field support. Since campaigns tend to go pretty quickly, you’ll be able to get a good look at all of the abilities and choose the best one to suit your play style. 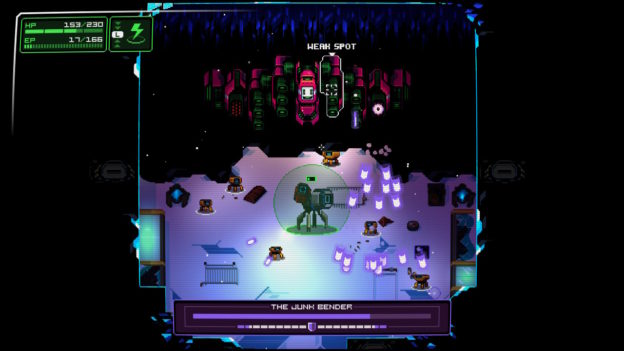 The choices don’t stop there. Save for the boss encounters, players can choose from one of three levels to run through. Stats under each level give players an idea of what kind of loot, how many elites (difficult enemies), and how big the level is, so they can choose to either play it safe or go all out. The choice of levels are random, but the designs are similar enough that you won’t have to spend too much energy trying to learn the layouts, and lessens your chances at getting blindsided. In a game with permadeath, anything that staves off your metal carcass from exploding is a good thing. 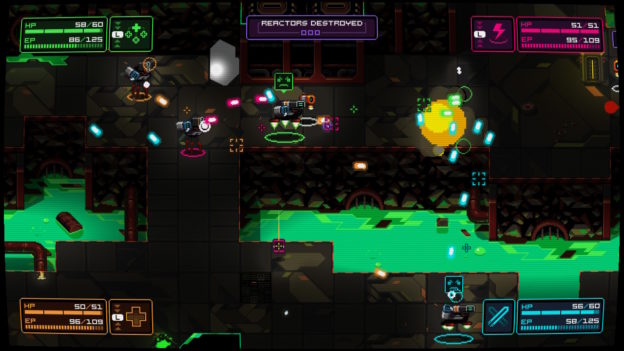 That doesn’t mean you won’t get blindsided, though. Nearly half of my deaths that occurred in Neurovoider resulted from a swarm of robots that flanked me. In the later stages of the game, it doesn’t matter how much HP you have, enemies can still turn you into swiss cheese. Co-op helps turn the tables somewhat, but it is still frustrating to watch all of the work you put into the campaign down the drain in a matter of seconds. 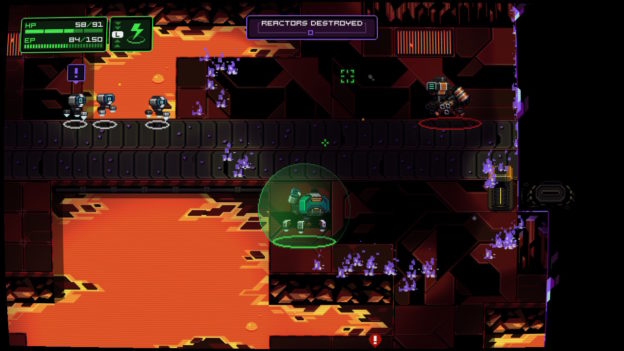 Permadeath is one of those gimmicks I see thrown around every once in awhile as a way to raise the stakes for the player. I was never a fan of it, because I think that difficulty should come in the form of obstacles and challenges, not some harsh punishment for failure. However, Neurovoider’s variety of builds and short campaigns actually work in permadeath’s favor, encouraging player experimentation while keeping the sting of failure to a minimum.  If I had been blindsided in Neurovoider after investing hours into a character, the second half of this review would have been dedicated to giving advice what best to do with the pulverized remains of a Nintendo Switch Joycon. Instead, I simply shrug my shoulders and look forward to checking out the newest guns I have yet to test, hoping my next build will be the doombringer to those swarming little jerks.