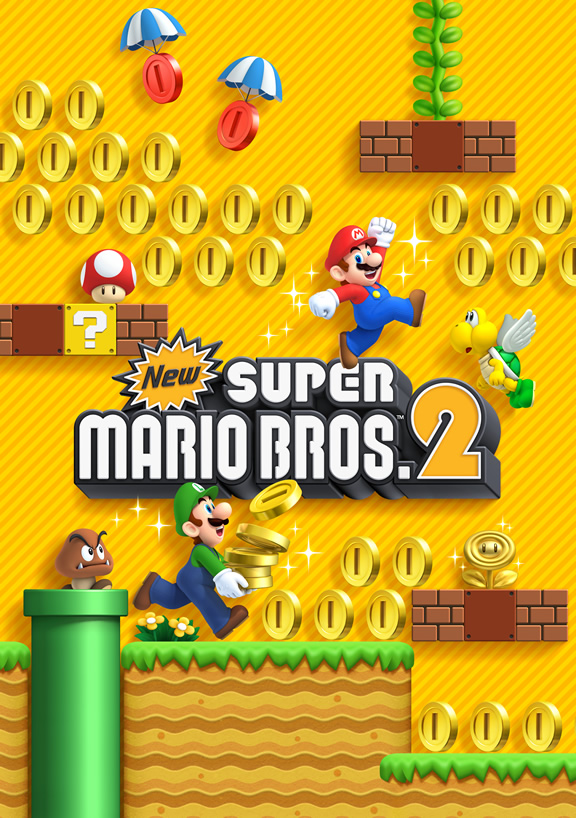 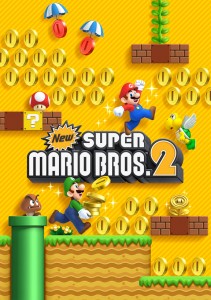 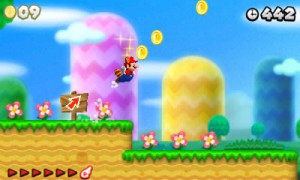 New Super Mario Bros. 2 begins with Mario and Luigi having a nice day in Mushroom Kingdom.  Suddenly, Princess Peach is abducted by the Koopalings (Koopa Kids) in the flying smiling face vehicle that Bowser used in Super Mario World.  Thus begins your journey to save the princess once again.

One of the best things in any 2D Mario game is the over world map and NSMB2 is no different.  The first time I played Super Mario Bros. 3 and found secret paths to new worlds, I was hooked.  Super Mario World then perfected the over world map by introducing even more secret paths, star worlds, and much more.  As soon as you play NSMB2, you’ll fall in love with the over world.  All of my favorites types of levels like ghost houses, mushroom houses, underwater levels, and sky levels are all heavily represented.  There are even cannons, which were introduced in NSMB on the DS, that allow you to jump to different worlds.  These are especially hard to access and add a great deal of replay to levels when trying to find every secret path. 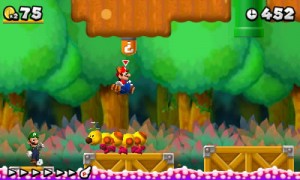 As I played through NSMB2, I kept finding myself grinning uncontrollably in different levels throughout the game.  Without going into too many specifics, there are many areas that are exact replicas of block layouts from previous Mario games.  One in particular caught my eye that many who played Super Mario Bros. 3 would recognize.  It was a series of blocks, that if you through a shell inside, it would hit almost all of the blocks and scoot away to hit more enemies.  That’s not the only example of nostalgia thrown into NSMB2 either.  Each world has a fortress about half-way through the map.  These fortresses, like in the first NSMB, act as hideouts for the Koopa Kids before moving to the main castle in each world.  The bosses in these fortresses are taken directly from Super Mario World and it’s definitely a good thing.  As much as I tell myself I’d really like something extremely new and unique in a Mario game, I still can’t help but love all the throwbacks to the originals.  I think it helps complete the ‘Mario’ platforming experience and helps make the game a more well-rounded one for both Mario pros and newcomers to the series. 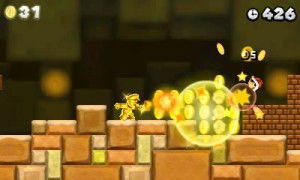 The gameplay in New Super Mario Bros. 2 can’t be beat.  It’s the ultimate example of platforming perfection.  Everything from how Mario moves through the levels, wall jumps, physics of platforms and enemies, and the speed are all in tact in NSMB2.  Even the re-envisioned Raccoon Suit feels like it did in Super Mario Bros. 3.  I can’t tell you how many times I played Super Mario Bros. 3 as a kid and would try and get my speed up on the smallest platforms to try and explore a potential secret above but I can tell you it’s still a lot of fun 20 years later.  One of the newest elements in NSMB2 is the gold flower which turns Mario into gold and allows him to turn any blocks or enemies into coins.  It’s a rare item to find in the game but it’s a lot of fun blazing through a level turning everything to gold with your Midas touch.  Another big difference in this Mario game versus previous ones is the focus on collecting as many coins as possible.  In previous games, coins were simply a way to receive 1-ups and increase your overall score in the game.  Now, every coin you collect will go to a universal tally that’s featured in a global race to a million coins.  When I first heard that NSMB2 was ‘all about the coins’, I was admittedly worried that the gameplay and experience would be dumbed down to a mini-game-like experience but thankfully it’s quite the contrary.  This is a full Mario game that will give you many hours of enjoyment and then some with the addition of the Coin Rush mode.  Add in all the secret worlds and secret paths to find in each world and you have a very deep Mario experience on-the-go. 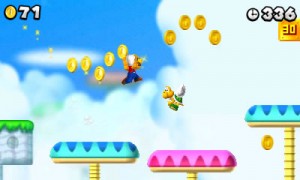 Graphically, New Super Mario Bros. 2 runs at super smooth frame rates and the subtle 3D depth is a nice addition to the series.  One thing I noticed right off with the 3D depth in NSMB2 is that it dynamically adjusts the blur of the background layer when adjusting the 3D slider higher.  If you have the 3D slider all the way up, the background will be more ‘blurry’ to give the effect of it being further back.  This was a lot easier on the eyes than some 3DS games that simply keep the same detail on background layers as the foreground ones.  My eyes would have a hard time focusing on what’s in front since the background was just as ‘in-focus’ as the foreground.  So the depth-of-field effect tied to the 3D slider is a great touch and one that I hope becomes standard for 3DS games in the future.

One of the coolest features in NSMB2 is the ability to play co-op with a friend throughout the entire single-player game.  Most of us remember being able to play 2-player on Super Mario Bros. 3 but that was more a hot-seat multiplayer experience where you were taking turns moving through the game.  Think of NSMB2’s co-op experience like New Super Mario Bros. on the Wii–hectic, fun, and sometimes frustrating.  You’ll find yourself knocking into the other player quite a bit during boss fights but for the most part it’s a fun, new mode especially to have in a handheld Mario game. 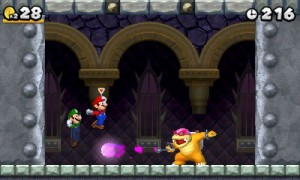 My biggest complaint with New Super Mario Bros. 2 has to be with the difficulty of the bosses.  Every single boss in the game is very easy.  You’ll find yourself beating one of the Koopa Kids and not even realizing it’s over.  There were many times where I asked myself ‘was that it?’  The game is very Jekyll and Hyde in this regard because the levels themselves can be very difficult.  In fact, you’ll be hard-pressed to find every star coin in each level on your first play through, let alone your second or third times through.

On the whole, NSMB2 offers a great challenge to seasoned gamers in the later levels and the secret levels in the game are an absolute joy to play.  With the promise of new, downloadable levels in the future, New Super Mario Bros. 2 is a great value and should be in everyone’s 3DS library.