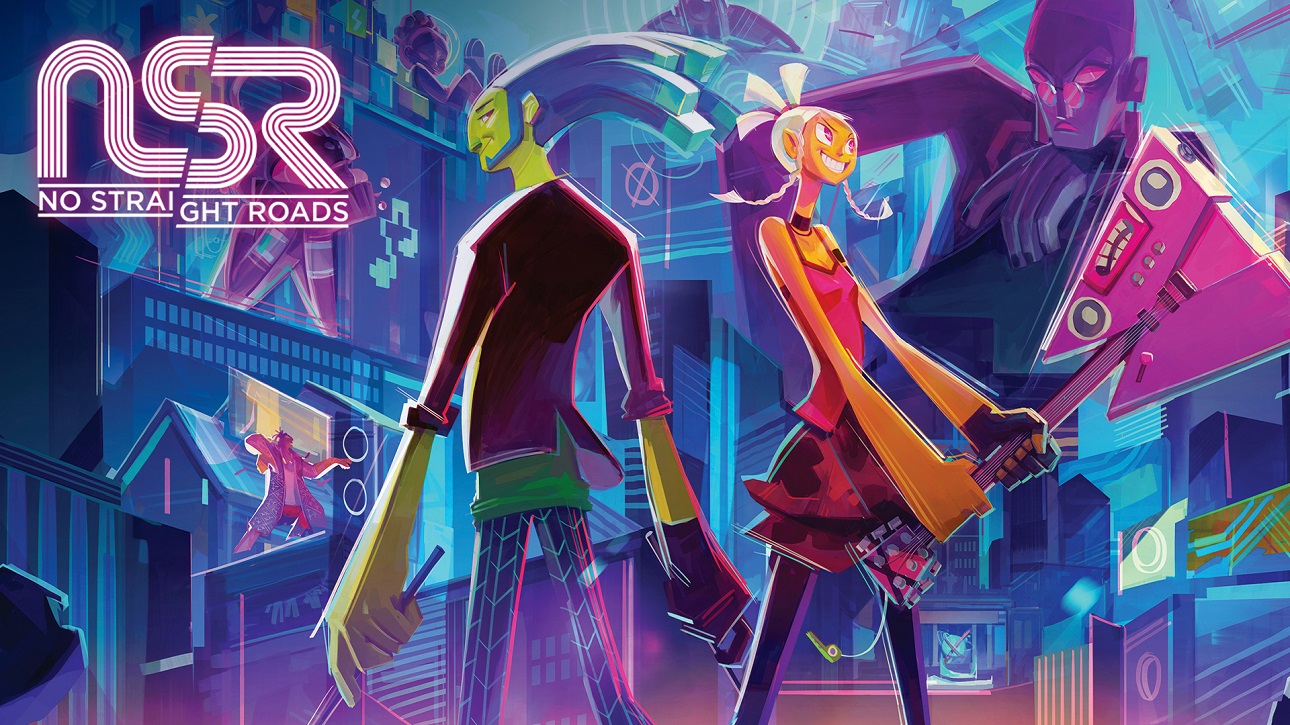 No Straight Roads is a musical action-adventure game that has you going up against an Electronic Dance empire. Can the NSR (that governs vinyl city) have their monopoly taken down? Will EDM and Rock ever co-exist, outside of this game’s high-quality soundtrack that straddles several genre lines? Will you get the fame you desire? The answers to these questions (and more) get answered as you play this rhythm brawler.

You play as Mayday and Zuke, the rockin’ members of indie band Bunk Bed Junction. They’re larger-than-life characters in many ways (Mayday especially), and the same can be said for the empire’s “musical megastars” they face. Before they can do that, they must first hijack EDM concerts. 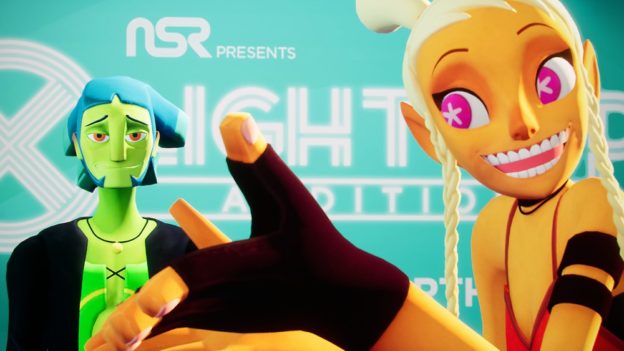 This first half of these boss battles have you breaking through security levels in a series of action-platforming sections against weaker enemies. I’m not sure if it stems from how the characters are animated, but the platforming could be more fluid. When jumping onto or past moving platforms, I’d sometimes find myself tumbling in ways I’m convinced didn’t correlate to my movement. Practice makes perfect…well almost.

The smaller life bars and lack of checkpoints make the above more than a minor issue. Even though you’re a duo, if either fails, you’ll need to restart, at least when playing solo. It wasn’t the right choice, and I have a hard time understanding the thinking behind it. I still like these sections, but they certainly could be better. 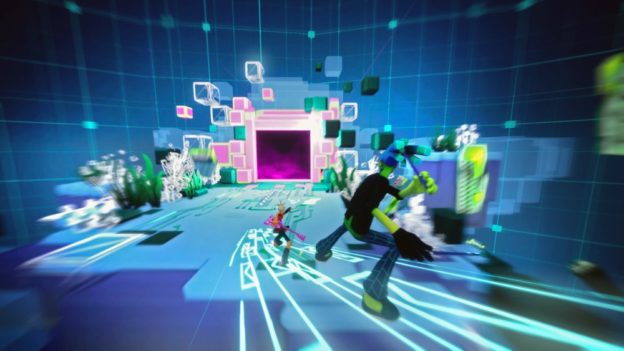 The checkpoint issues extend to the bosses. These are long encounters broken up into phases, and they are entertaining. But if you fail on the last phase, you need to restart from the first. So, what initially impressed soon wears out its welcome. These devs seem afraid of checkpoints (possibly due to length concerns), but it’s unfortunately to their detriment as it makes the gameplay feel dated.

Please don’t get me wrong; I want to reemphasize the entertainment offered here. But the checkpoint shortage is more significant than it should be because of the combat issues. Even a few hours in, I still felt like I was learning the gameplay, for better or worse. The weak camera will need lots of adjusting when you can. The collision detection with some of the threats can be charitably described as subpar, making seemingly straightforward sections turn into spikes. There are needless visual distractions to the combat that sometimes has a broad aim when a narrow one would serve it better. Sometimes less is more.

If you have another playing with you, some of No Straight Roads’ cheapness seems to dissipate. You can even co-op as a trio, with the third playing as the pet alligator (Elliegator), usually confined to the storage room. It’s a shame that, with stay-at-home restrictions, there’s no option for AI-controlled partners to lift the dullness. Perhaps in an update? 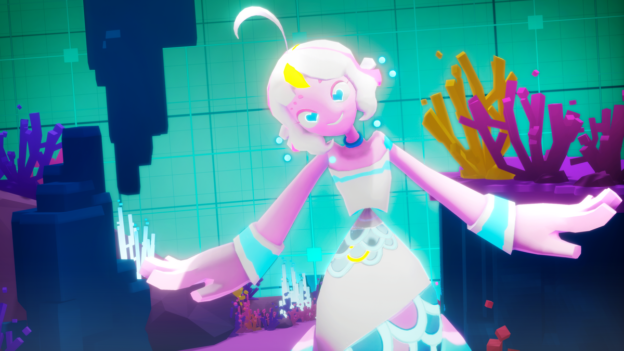 What do I do when frustration and tedium set in? While you can improve your rank against already defeated bosses across several parameters, I’ve been returning to the sewers. The resolution might be a bit fuzzy, but there’s plenty of areas to check out in the literal underground music scene. Your living quarters – complete with a rhythm-shooting arcade game that saves high scores – can be decorated. The strategy room gives you briefings (via your number-one fan, Kliff) for upcoming boss battles and lets you check out your collectibles. Zuke’s workshop enables you to upgrade – I wish some were longer lasting. Underground gig allows you to expand your skill tree and see your growing number of fans. These and more are enjoyable diversions.

Exploring Vinyl City is more fun than I expected. The camera is much less of a concern here. The collectathon gameplay serves to liven up the city as you power up machines with converted energy strewn from one end to the other. I’ve had quite a bit of fun just running around, taking in Vinyl City’s artistic points of interest, and listening to the music. 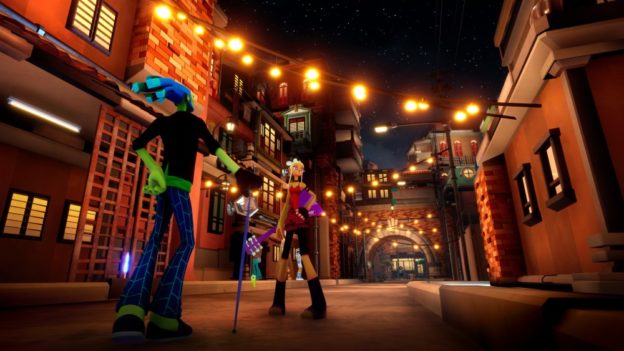 Speaking of, while the music-based combat may be a bit meh, the tunes themselves are certainly not. I’ve said it repeatedly, but any game where I listen to the soundtrack on its own needs commendation. It has names you might recognize from other titles. The music is alluring and effective in keeping me playing through some drab gameplay.

The music isn’t the only audio asset, as the amount of voice acting is cause for commendation. Yes, Mayday’s voice actor may occasionally distract with certain words having more a pronounced dialect, but overall, the vocals succeed. They bring so much personality to the characters and are important contributors to their depth and larger-than-life auras. I especially enjoy the gravitas of DJ Subatomic Supernova. 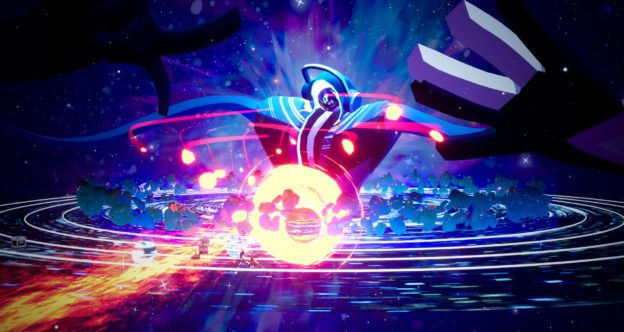 Considering this is the first game from a comparatively small indie development studio Metronomik, No Straight Roads is a stunning debut in many ways. Yes, some gameplay decisions seem a bit careless, leading to an experience that’s less user-friendly, but you’ll still want to plug away at it. Sure, the story has some predictable cliches, but it’s also amusing and full of fun surprises that I won’t spoil. The musical revolution left an impression for sure.

No Straight Roads often has a frustrating difficulty that stems more from developer choices and less from player skill, making for flawed fun. This rhythm brawler is best played as an in-sync duo or trio. But a slicker, more stylish toe-tapping passion product, you’re not likely to find. I hope to see more of Bunk Bed Junction. 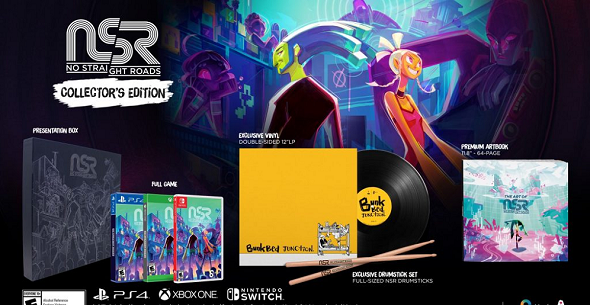 If you missed the late summer digital release, check out the physical collector’s edition that followed. Besides the game in a fancy box, it also comes with a 64-page art book, an LP record, a digital mini-soundtrack, and a set of NSR drumsticks.

No Straight Roads often has a frustrating difficulty that stems more from developer choices and less from player skill, making for flawed fun. This rhythm brawler is best played as an in-sync duo or trio. But a slicker, more stylish toe-tapping passion product, you’re not likely to find. I hope to see more of Bunk Bed Junction.