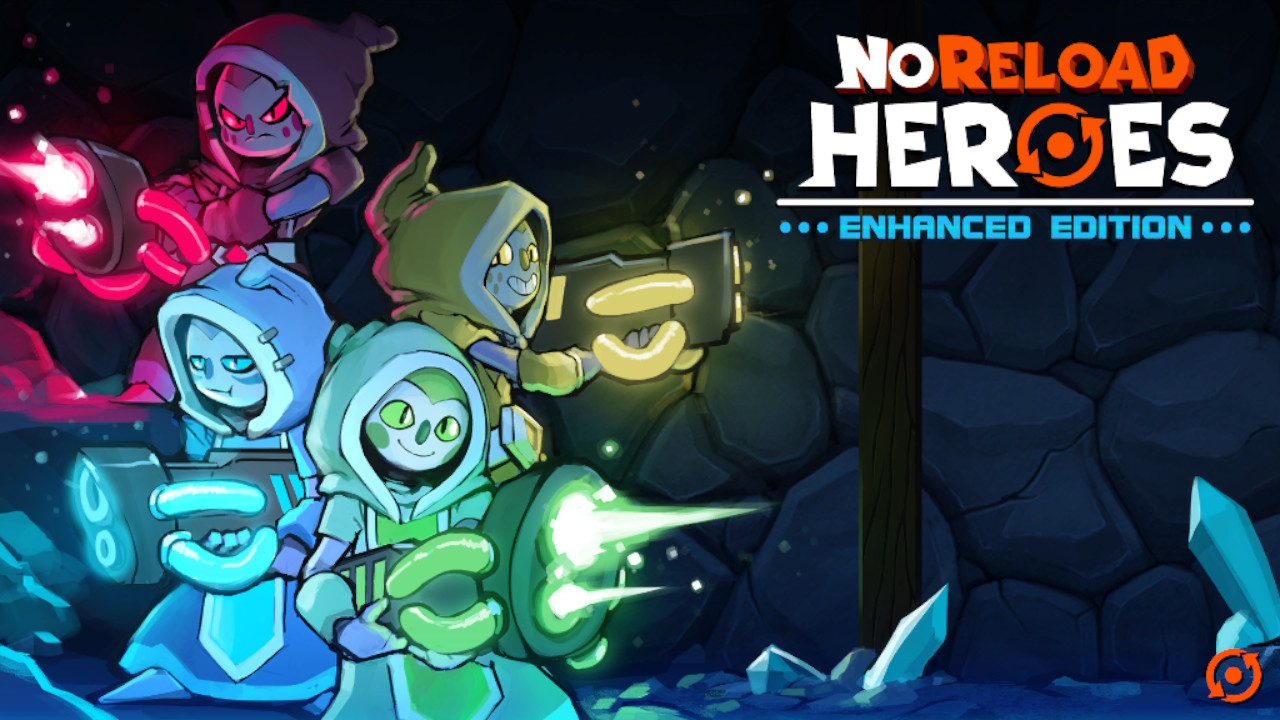 NoReload Heroes Enhanced Edition is a party, twin-stick shooter developed and published by Teatime Holdings. Described as “frantic” and “chaotic” gameplay, let’s see how true that is. 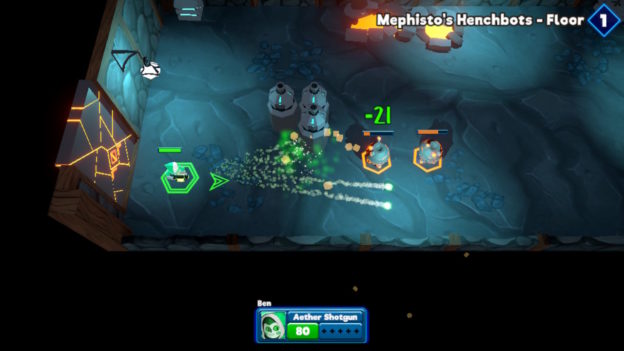 The game opens with a brief cutscene with four mages putting together a robot, Mephisto, the game’s main antagonist. He loses a screw, and it changes his code on the computer. When the mages activate him, he turns on them and is an evil robot. Now the mage tower is taken over by his henchbots, and you need to climb the tower, defeating robots, trying to make your way to Mephisto.

Then you’re thrown into the gameplay. You and up to three friends locally can climb the tower together. No two playthroughs are the same as each floor is randomly generated, and the weapons that get dropped are random as well. That’s about the only variety you’ll get from NoReload Heroes Enhanced Edition, though. 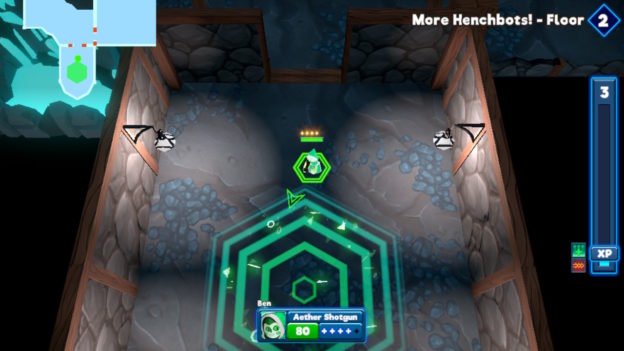 The first floor acts as a thin tutorial. It tells you to move with the left analog stick, aim with the right analog stick, and shoot your gun with R or ZR. You can use L or ZL to dash, thus becoming invincible for a moment. Then you go through a room, defeat a couple of bots, and head to the next room where there’s a portal to the next floor. Rinse and repeat.

When destroying the robots, they’ll drop loot. You may get a health potion, a power-up, or a new weapon. You can only hold one weapon at a time, and you can swap it out when a new gun appears. If you don’t like it, swap back to your previous one and move on. There are a decent variety of guns that are magic, such as bombs, lightning, snowballs, and more. I had a favorite my first playthrough. When I died and tried again, I couldn’t find that weapon again. You need to play with what you’re given. 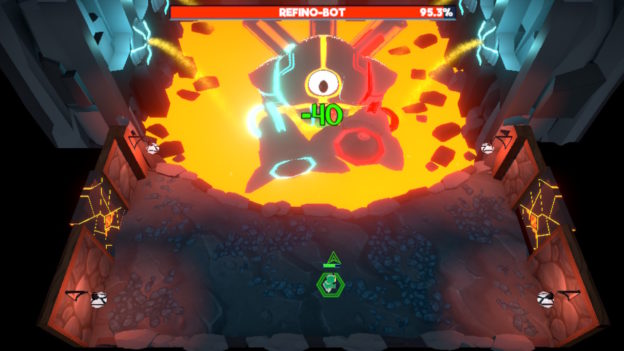 The power-ups stack, and you can have five at a time. This increases your damage by 5% and, if you get hit, you’ll lose a power-up. It’s not a big deal because you can always get more. Honestly, I didn’t notice much of a difference with or without the power-ups.

Defeating robots also gives you experience points. Once you level up, you can choose a stat boost. This may be increased speed, increased attack, longer weapon range, and more. Two will randomly be presented, and you can only have one per level up. If you’re playing with friends, you each choose one and vote. You can either agree on what you want or choose something different, and the game will randomize the winner. 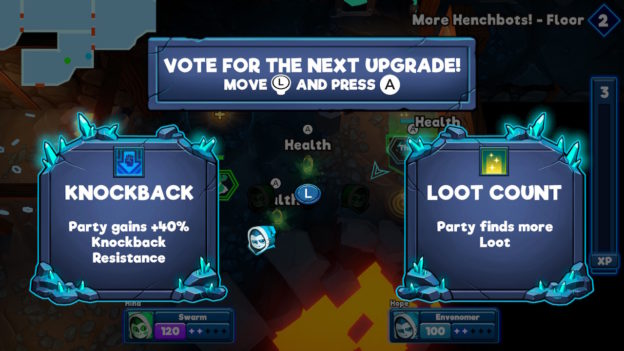 Each floor is a tad bigger and longer than the previous one. You go through multiple rooms until you find the portal. I liked to explore each room before moving on so I could get experience points. Some rooms had a purple door which was a mini-boss. Upon defeating them, you gain more weapon options, but you can still only choose one.

NoReload Heroes Enhanced Edition wasn’t too bad in terms of mechanics and actual gameplay. I’ve seen tower climb games before, and it’s hard to make one unique. Unfortunately, this game doesn’t have enough meat to it. While the floors are randomly generated, it’s more or the less the same. Explore the floor, fight robots, get a new weapon, move on. Each room doesn’t have too many robots in it either, even on the later floors, so it’s not as chaotic as you would think. If you’re playing with friends, the game is pretty easy. And no, there are no difficulty settings you can change. 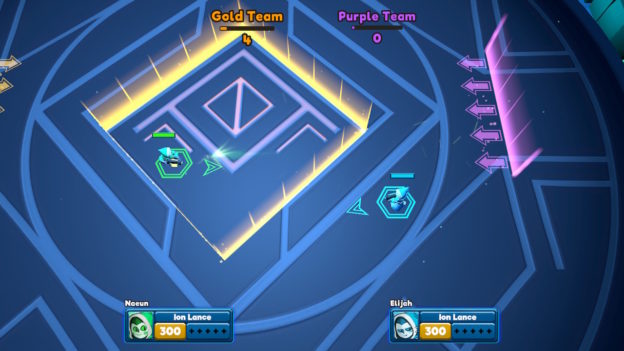 There is a versus mode, though. Two to four local friends can go against each other where the middle of the stage is neutral, and you need to claim it by remaining in the center for a total of 50 seconds. You shoot at one another to protect the center. However, the stage was so small, and there are no options to choose a different stage or get a weapon you want. It was utterly bland. I tried it once, and that was enough for me.

If you’ve never played a twin-stick shooter before, then NoReload Heroes Enhanced Edition wouldn’t be a bad introduction. It’s not too difficult, and you can easily get used to the controls without swarms of enemies constantly in your face. I had fun with the game, especially playing with my sister. I may go back to it at some point, but there are better twin-stick shooters out there to try.

NoReload Heroes Enhanced Edition is a fairly bland twin-stick shooter with smooth controls and fun gameplay for the first hour before it gets too repetitive.