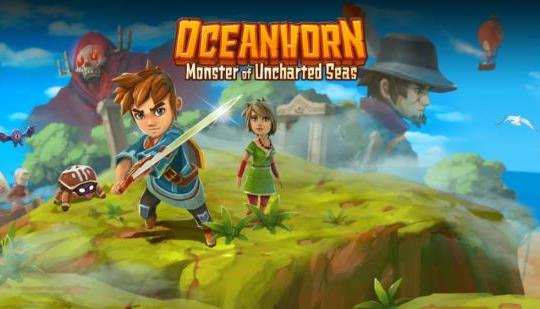 Oceanhorn: Monster of Uncharted Seas is an action-puzzle game that’s main story is spread across numerous islands. There’s a lot to like about the game, which has an inescapable resemblance to Zelda titles, making it easy to love – at first. I was initially quite hooked, however a few elements stop it from reaching greatness.

The game starts out promisingly, with a young, nameless boy reading a letter from his father, who has abandoned him to seek and destroy the legendary sea monster, Oceanhorn. Thus begins your journey, taking control of the kid. The quest before you is to find the sacred emblems and essentially save the world.

This sense of adventure begins right on your home island, and your first three tasks are simple, self-paced tutorials, like collect 25 coins and read 10 signs. Each island follows this pattern of three distinct goals, creating a sense of achievement. You’ll also be rewarded with experience points for your trouble. One thing I’d have liked included is a way to track your goals, like how many of the 25 coins I’ve already collected. This becomes more annoying later when you have to do 100 things, for example.

The island itself is very well designed and looks great. In fact, the overall look of Oceanhorn is polished, with the graphics and presentation being its strong suit. It’s bright and colorful and plays very well on the Switch, running smoothly in handheld and docked mode. You play from an isometric perspective on a series of islands that are lush, tropical and green. Unfortunately, there’s not much variety in their design, since most of the islands adopt this same look. 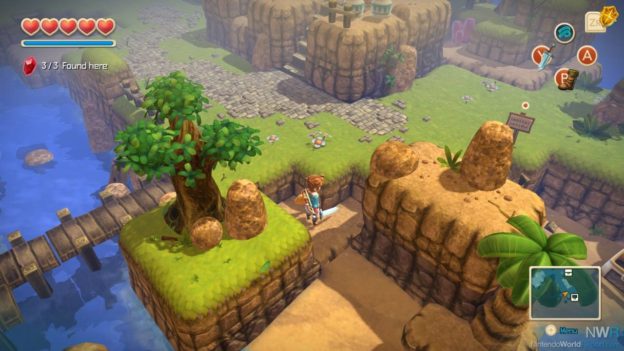 Just one of the nice-looking island you’ll be visiting in Oceanhorn.

Even the enemies vary little, with the same ones popping up on each island. There are some great boss moments though, with big creatures that require a little creativity in defeating. This keeps things a little more interesting since, generally, none of the enemies are particularly difficult. Unfortunately, the same can be said for the game overall – it’s not hugely difficult, though there is plenty to do. 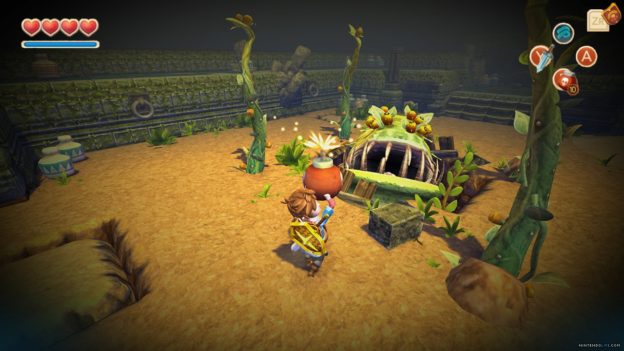 Bosses like this critter add new elements, though they’re still easy to defeat.

There are many puzzles littered throughout the islands, but there’s not a lot of creativity to them. Most puzzles involve you moving boxes into clearly marked spots. The other main type is finding a trigger to open a gate. It’s enough to keep you entertained at first but it’s not overly challenging, and it does border on being repetitive. The islands themselves are also quite linear in their progression, revealed one or two at a time as they pertain to the story.

The story unfolds island by island, and at some point about four hours in, I realized that I wasn’t particularly invested in what was going on. The relationships aren’t particularly convincing or moving. Some feel rushed and unfulfilled, and I didn’t really feel or believe the connection between certain characters. Even the kid’s uncle – in fact, even his father, who I’m supposed to be seeking – meant little to me. It’s tough to live up to the emotional connections of The Legend of Zelda games, but when Oceanhorn resembles that series in so many ways, it’s also harder to ignore.

On a more positive note, the controls are very good. It’s easy to swipe your sword or use your shield. And there are more weapons introduced along the way, like bombs and arrows. There’s even magic. And then there’s the seafaring, which is basic but enjoyable. There’s an obvious Wind Waker influence here, but traversing between islands is easy – select your destination on the map and away you go. There’s no steering required, meaning you’re free to shoot at whatever stands between you and your destination. 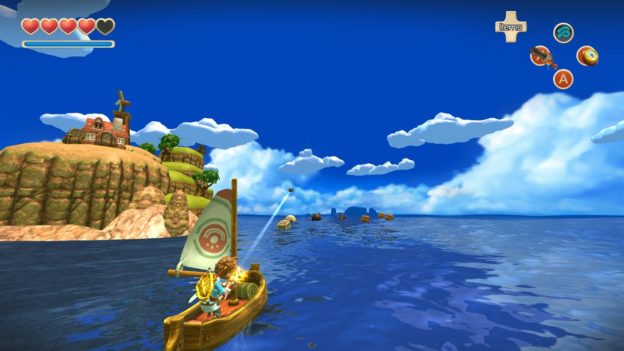 Oceanhorn borrows very heavily from the style of Zelda games, particularly at sea.

In some ways, this game feels like the developers were on the verge of creating something bigger. Given its smartphone origins, the simplicity is not overly surprising, but I feel it had the potential to become more. Overall, Oceanhorn: Monster of Uncharted Seas looks great and is very playable, especially for the first few hours. It’s a little on the easy and repetitive side, but there’s still a fun journey to be had for anyone looking for a light and breezy escape. There’s plenty of treasure to find along the way, and a handy percentage indicator to tease you into coming back to find what else is hidden on each island.

A fun adventure game that’s inspired by the Legend of Zelda series. It’s not as deep, and suffers from some repetition, but could be worth checking out if you’re looking for a light and breezy game to keep you busy.