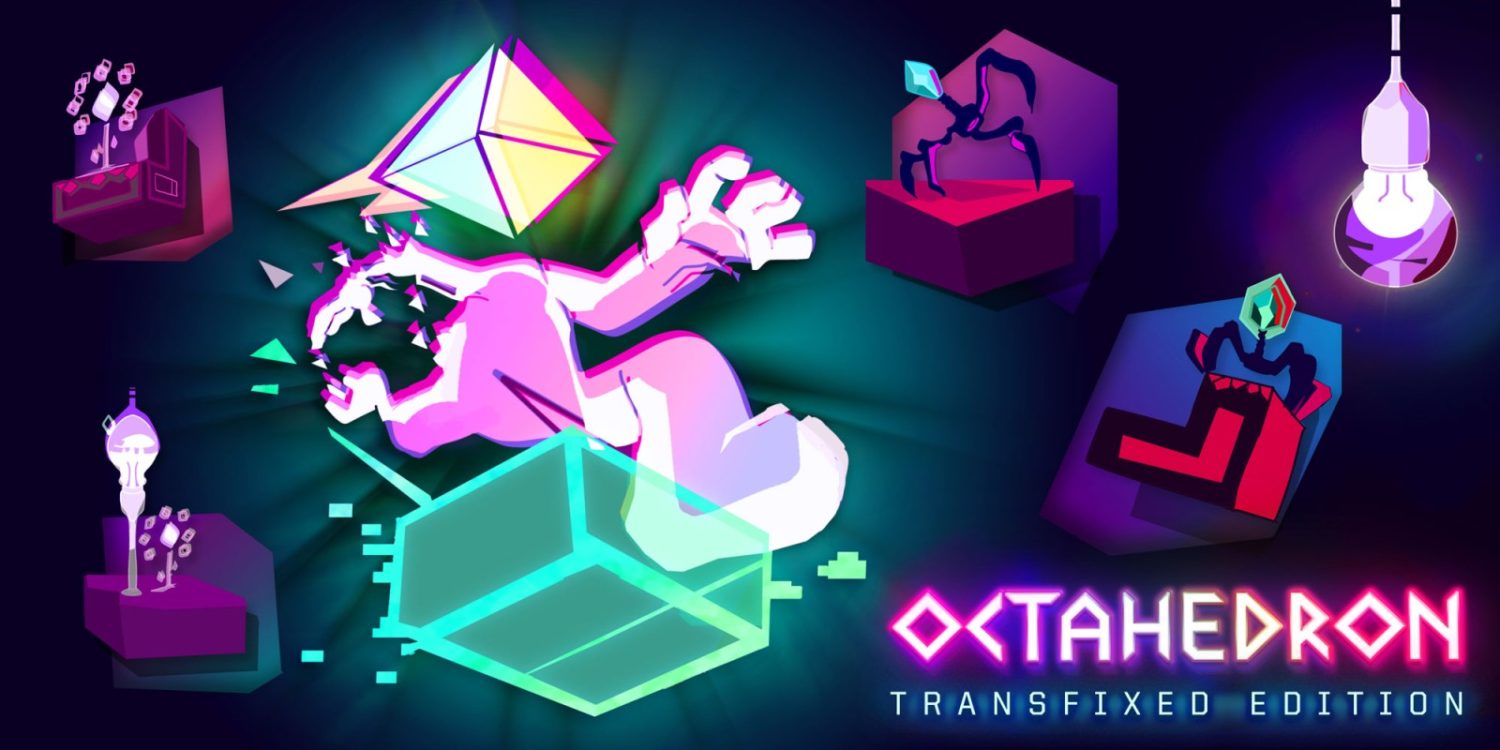 Octahedron: Transfixed Edition is a platforming game. It’s also a musical game. More specifically, it’s a quirky, psychedelic romp through a platforming underworld where enemies move to the beat. Confused? Perfect! Read on. 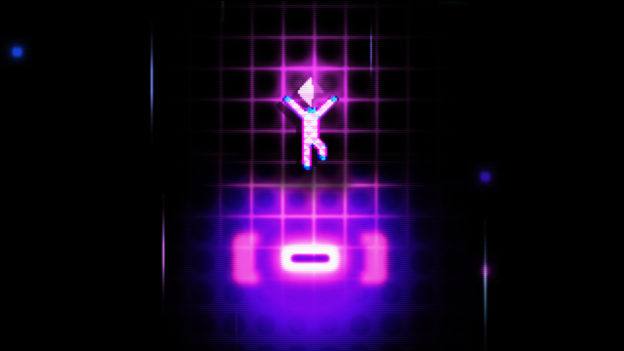 The good news is that, despite my clumsy introduction, Octahedron manages to excel in both genres. Your main goal is to navigate through levels using music as your guide. The dark introduction shows a lonely man wandering through the woods one night. He encounters an eerie, glowing shape – with eight sides, naturally – that transforms him and transports him to an underground world. Trapped, he must use his new powers to escape.

Your character has the unique ability to conjure platforms from thin air – a handy move in this genre. Once you jump on your newly created platform, you can whiz left or right until it disappears a few seconds later. They can also be used to activate elements, block enemies, or enter tunnels to access other areas. At first, you’ll only be able to create one at a time, with this number varying level to level. This brings a tactical element to the game as you use your limited supply to navigate tricky pathways, avoid enemies, and collect the many objects scattered everywhere. 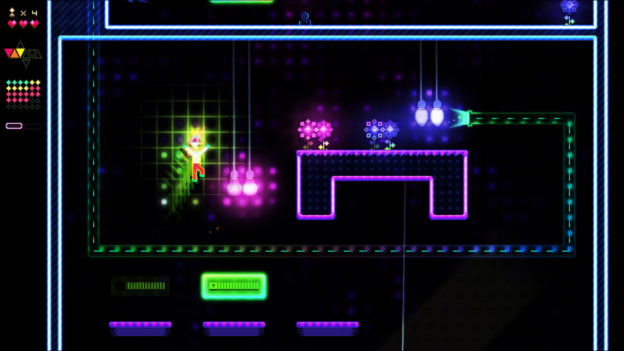 There’s a lot to do in Octahedron; completionists will either have a field day or a heart attack. Firstly, there are light bulbs floating randomly. You can pop these with your trusty platforms, converting them into flowers (don’t ask me why). You must collect these flowers – about 25 per level. These also serve as a means to unlocking further levels. There are gems to collect along the way, too, which are rarer, and harder to find than the flowers. They’re often hiding out of the way – death is inevitable.

Which brings me to my next point – this game is hard! Tricky enemies spring at you or pace back and forth waiting for you to land on them. Some pulse with the music as they’re shot from a gyrating gun. You’re given three hearts and basically endless lives, but it does feel a little on the difficult side. There’s a slight learning curve, though it introduces the core concepts and moves quite well via a straightforward tutorial. 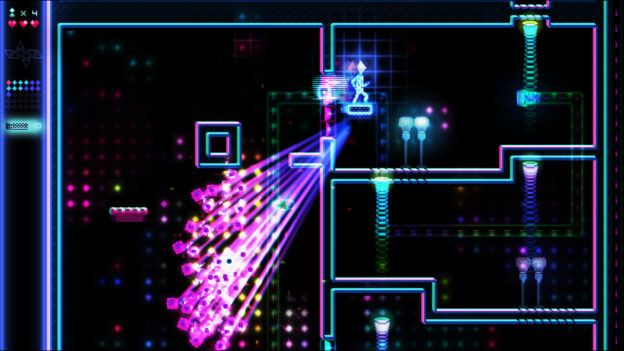 Levels are longish, even from the get-go. Apart from the collectibles, there’s also a time trial which is new to this Transfixed Edition of the game. On top of that, if you’re really a glutton for punishment, there’s a par for using a set number of platfiorms on your way through. I was nowhere near this number.

Octahedron has a unique visual style, from the polygonal shapes to eerie, glowing colors. It’s a pretty and dangerous world set upon a black background with neon platforms that pulsate to the beat. It’s like Mario’s 2D levels collided with the set of Tron. And then there’s that beat; the music is undoubtedly one of the game’s main drawcards, with an uptempo soundtrack that feels like an underground club. It completely matches the neon aesthetics. This isn’t exactly a rhythm-based game, since you can jump and move about as you please. It’s more about your own rhythm, your own beat. Other elements move in time to the music – like enemies or platforms – so your jumps will have to be timed too. But given the odd character and bizarre world in which he’s trapped, dancing to your own beat sounds pretty poetic to me. 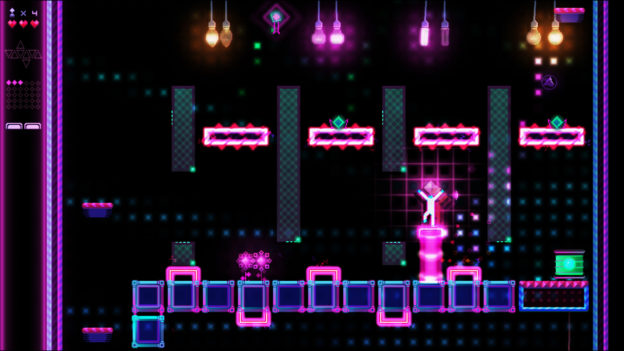 Overall, Octahedron is unique, fun and challenging. The neon visuals and pulsating soundtrack make it worth trying. The high difficulty might put some players off, but platforming fans with a lot of patience will get a real kick out of the design and the number of collectibles. This one is worth checking out. 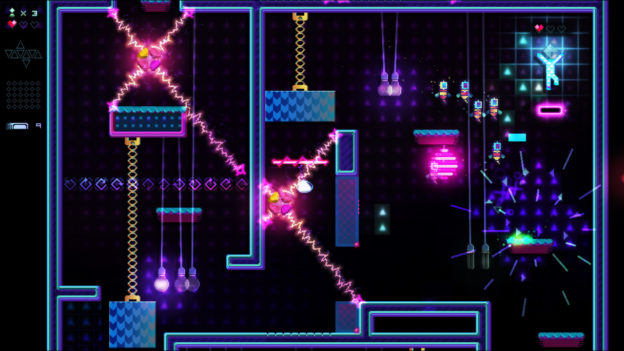 Octahedron: Transfixed Edition is a fun and challenging platformer with a strong reliance on psychedelic visual and musical elements to get you through – think Mario crossed with Tron. It’s challenging, with loads to do, and could be the game to scratch that completionist itch.

I love all things Nintendo! It's my Dad's fault really, since he bought my sister and I the NES many Christmases ago. It was the beginning of a love affair, but who could blame me? There was no better introduction to video games than Mario and Zelda! I'm a proud owner of a 3DS (Fire Emblem-branded, thank you), a Wii U (which, incidentally, also doubles as my TV remote), and the Switch (day one, naturally). I'm a writer and a web developer, so I love writing reviews and take design elements very seriously. My all-time favorite game is Super Mario World for the SNES, though I'm also partial to any of the Mario Kart entries.
Top