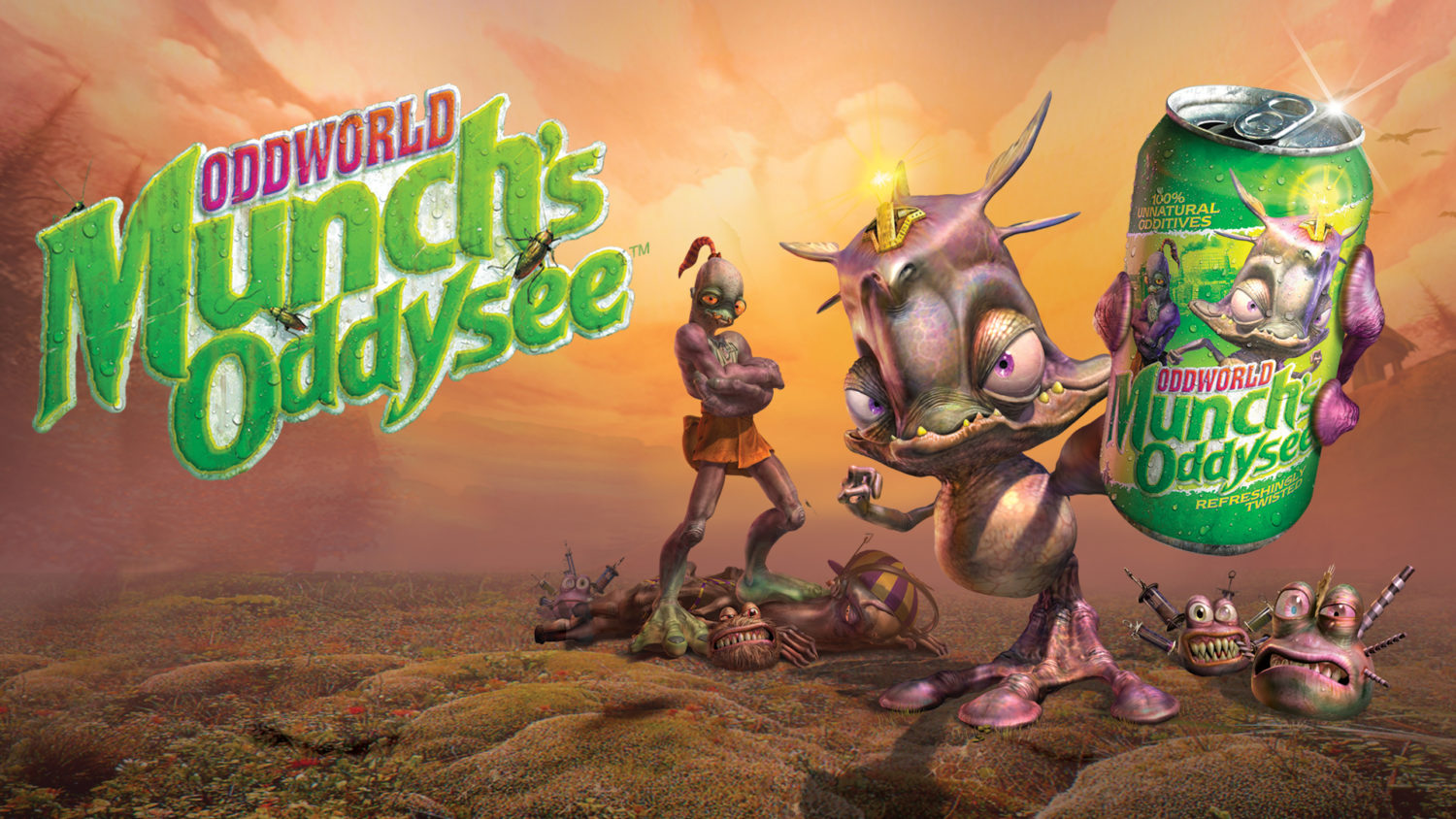 If there is a way to describe Oddworld accurately, it’s most certainly both strange (in a good way, natch) and never afraid to show its dark humor chops. Those elements alone are what stuck with me with Oddworld: Munch’s Oddysee, even if the overall product hasn’t aged as well as I thought. Originally released as a launch title for the Xbox in 2001, the third entry in the Oddworld series was at the time one of the few games for the new console that caught me for its brash weirdness. Unlike the first two Oddworld entries (Abe’s Oddysee and Abe’s Exoddus) which are 2D platformers, Munch’s Oddysee is the first Oddworld chapter to be fully 3D, carrying over many of its platforming aesthetics and hooks. Visually, Munch’s Oddysee in 2001 looked to take advantage of the OG Xbox’s processing power, and it showed back then. But, time can surely take its toll on this remastered port for the Switch, even if the overall atmosphere is admirably absurd while the gameplay is just a mixed bag. 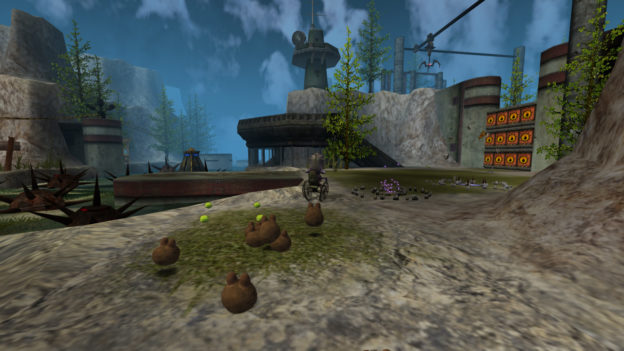 Taking place following the events of Abe’s Exoddus, Munch’s Oddysee begins with the industrial race of Glukkons hunting a frog-like species called Gabbits nearly to extinction. One such Gabbit who is named Munch soon realizes that he is likely the last of his kind. After being captured and brought to a floating fortress named Vykkers Lab to be experimented on and have his lungs harvested, Munch soon escapes. All while this is going on, Abe, the Mudokon protagonist of the first two Oddworld games, is tasked with rescuing Munch. Eventually, Munch (who now has an electronic device attached to his head) escapes the research facility while then crossing paths with Abe.

Together Abe and Munch must then trek across the planet of Oddworld and return to the lab to save batches of Mudoken eggs and the last can of Gabbiar (Gabbit eggs) before it is sold off at an auction. At its core, though, the story of Oddworld: Munch’s Oddysee is incredibly strange (the same can be said of the game’s character designs) and charmingly intriguing enough that I wound up caring way more for both Abe and Munch’s journey and stated goals. Even I couldn’t help but feel slightly sentimental at the beginning cutscene where Munch discovers he is all alone and probably the last of his species. Now, if most of this may seem confusing for a first-timer, the main menu thankfully includes a collection of cutscenes from the previous Oddworld games that do a good job of recapping the story so far. 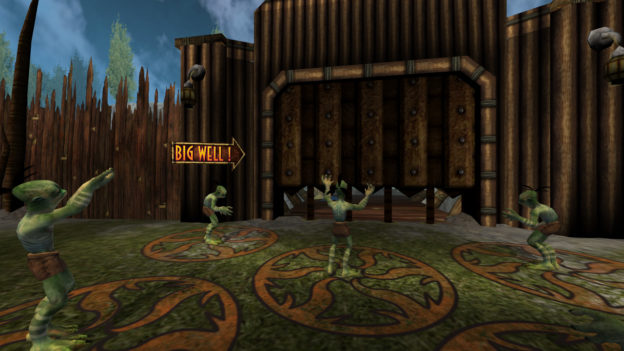 Throughout your journey, you will see yourself switching back and forth between Abe and Munch to solve various platform puzzles while fending off foes. Controlling Abe gives you the ability to pick up varying objects and things (including Munch), recruit captured or stray Mudokons, and utter a possession chant. The possession chant requires the use of Abe collecting green spherical spooceshrubs littered all over the map. Also, collecting spooceshrubs will allow you to unlock doors or revive fallen Mudokons. On the other end, controlling Munch enables you to swim, zap enemies with his electronic device implant, and recruit and command small puffball creatures called Fuzzles. They may look and sound cute at first, but Fuzzles can quickly turn deadly when you sic them on groups of enemies. There is a certain joy in seeing it all unfold in a dark, comedic sort of way. 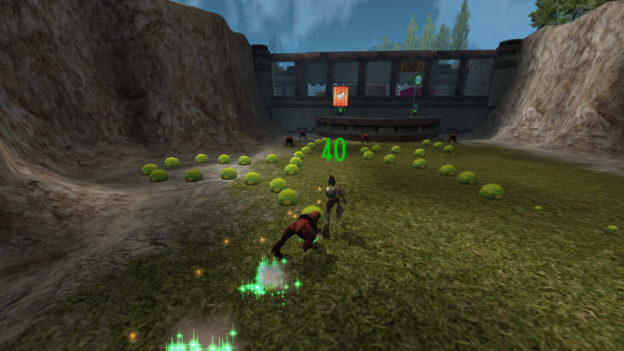 It should also be noted when recruiting both Mudokon scrubs and Fuzzles that not only are they integral for your defense and solving puzzles but also raising your Quarma rating.  The Quarma (Mudokon for karma) rating is based on how many scrubs and Fuzzles you can rescue throughout the game’s levels. The amount of Quarma you have is dependent on whether or not you will receive a good or bad ending for Abe and Munch.

The obvious goal for each level relies heavily on working together with Abe and Munch, but the overall progression does come with quite a bit of frustration. While several levels are straightforward with what you need to do in order to get both Abe, Munch, and others to safety, others quickly show their platforming woes. This is exemplified when using Abe to make tight jumps across ledges and such that can become incredibly tiresome. There were far too many times when I was forced to restart a level due to a costly mistake such as a stray hit from an enemy or Abe drowning because of a missed platform jump. The game’s quick save feature certainly got a workout from time to time when I anticipated moments like that. The frustrations only intensify more when the camera starts to work against you. Coupled with that it can be hard to see where you are trying to jump when indoors due to poor lighting. While I am aware that this is an HD remaster of a game from 2001 that’s bound to show its age, the design shortcomings from that era can still be aggravating. 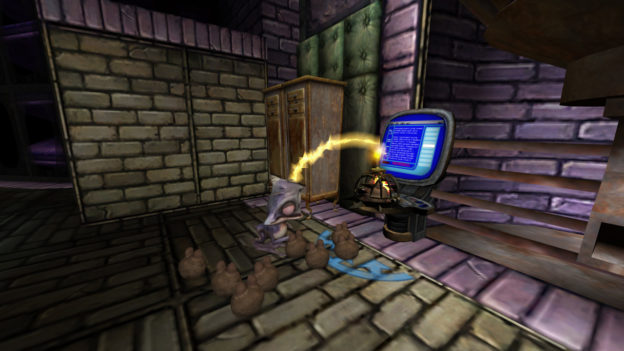 However, even when these aggravations subside briefly, Munch’s Oddysee can sometimes be quite a weird, enjoyable romp. For example, Abe’s possession ability is fun to use if you find yourself wanting to clear out enemies to avoid losing any Fuzzles and Mudokons. But there were times when trying to eliminate a few baddies that I found this process can get repetitive and tiresome. Still, being able to possess a big machine gun-toting Slig or have Munch control a giant four-legged robot called a Snoozer does have its moments. While Munch can be at some points frustrating to maneuver on the ground and susceptible to enemy attacks without his zapping ability, his water-based objectives add a change of pace. In addition to their own set of abilities, there are vending machines (or vendos as they called here) in some levels that will help increase how high you jump, your running speed, or turn you invisible for a brief period of time. Many of these abilities are helpful when you are in a pinch, but the time-constraints will find yourself going to these machines at inopportune times. On the subject of the game’s puzzles,  switching between Abe and Munch is quick and easy when solving them. But, the puzzles themselves begin to lose some variety as the game progresses. While there is some challenge to each platforming or crane puzzle, repetition soon starts to rear its head and quickly bogs down some of the later levels. This repetitive cycle, coupled with some annoying enemy encounters, makes things feel less desirable. 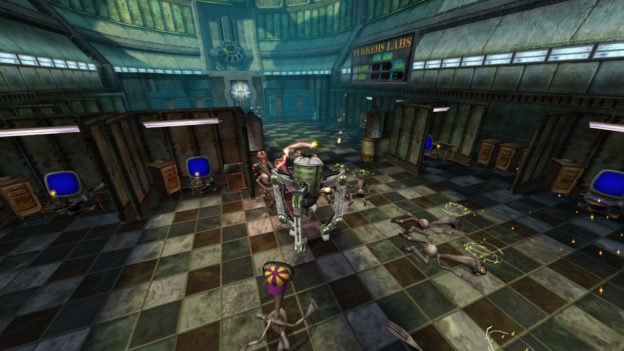 While one can appreciate the atmosphere, characters, dark humor, and certain gameplay aspects of Oddworld: Munch’s Oddysee, it teeters between the line of frustrating and charming. For a game originally released in 2001, there are surprisingly a few positive flashes here and there, but it can feel less than polished as its age shows throughout.

While it does exhibit a lot of absurd charm, this HD remaster of Munch’s Oddysee simultaneously holds up both with its unique characters and world while also showing its age in varying degrees in its gameplay.