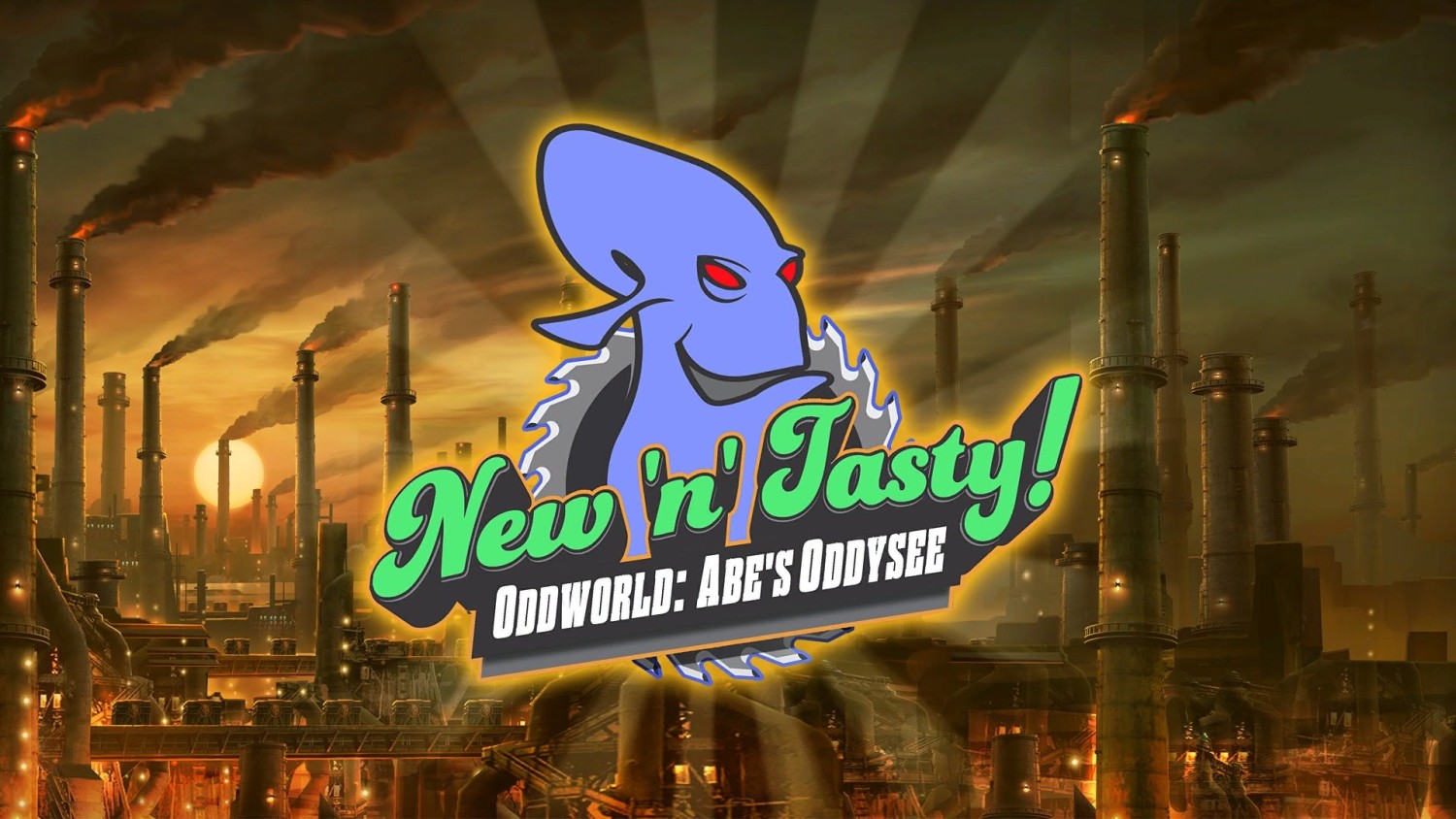 Confession time: I’ve never played an Oddworld game before. This puts me in a unique position to try the recently released revamp of the original Oddworld game, which was released on the Wii U in February.

For the uninitiated (like me), the Oddworld series began in 1997, and takes place on a planet of the same name. The odd-looking inhabitants are called Mudokons, and you play the role of Abe, one of the many slaves working at the RuptureFarms meat-packing plant. It’s upon Abe’s discovery that Mudokon slaves actually ARE the meat that he decides to escape, taking as many other Mudokons with him as he can.

And this is where you step in. As Abe, it’s your job to sneak through the factory and outlying areas, avoiding danger and helping other slaves escape in the process. There’s a counter that helpfully tallies your escapees as you proceed, starting at the high number of 299, giving you plenty to do. This is a good replayability feature, as you’ll want rescue as many as possible to truly complete the game.

The game itself is not a sequel, instead it serves as a reboot of sorts, a ground-up remake according to developers Just Add Water. Essentially New ‘n’ Tasty is a recreation of the original Abe’s Odyssey title with enhanced graphics, tweaked puzzles, and more prisoners to rescue. It’s also the first time an Oddworld game has graced a Nintendo home console and, despite this version releasing on other systems as early as July 2014, it’s certainly a case of better late than never.

Oddworld: New ‘n’ Tasty is a platformer at heart, but with many traps, hidden areas and puzzles, it’s much more than a simple run and jump exercise. You’re also weaponless for the most part (there are grenades at some points), so most of the time you’ll need to use your wit to get by. Whether it’s to sneak past guards, jump over mines, avoid meat grinders, run from dog-like creatures, evade motion detectors, or simply remain completely still while you’re obscured by a smokescreen, it’s fun and exciting, and certainly puts you in the mindset of an escapee on the run. 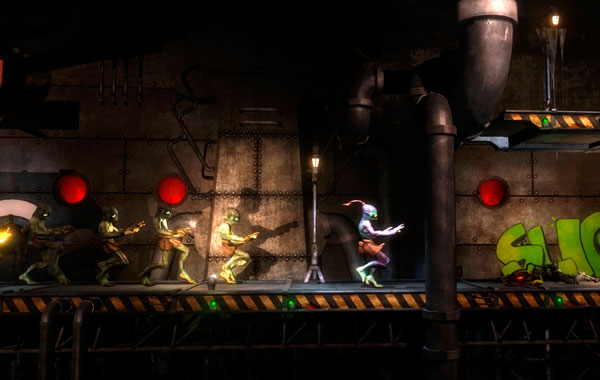 Sneak with your fellow captives past sleeping guards

These puzzles are often tricky, but thankfully you’re granted three difficulty levels, save points, plus unlimited lives and unlimited time. This provides you with the freedom to explore every nook and cranny at your leisure. It also means that Abe repeatedly dies in horrible, graphic ways. It’s disturbing at first to witness Abe’s insides being thrown onto the screen, but it happens so often you become desensitized. It makes the game less frustrating or stressful than it could have been, but also takes a little something away from the urgency of Abe’s escape. In essence it puts the emphasis on the puzzles, and some of those tricky spots will have you pulling your hair out, so you feel quite accomplished when you conquer it the twentieth time. 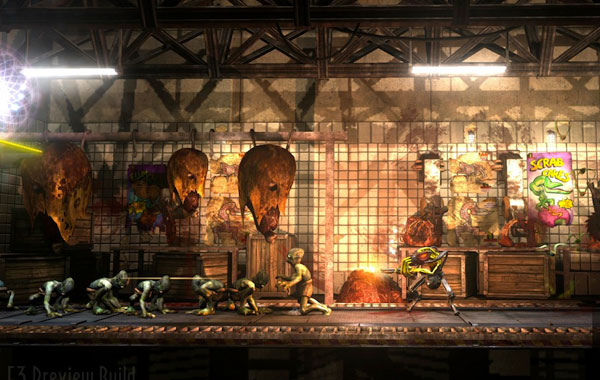 One of the many deaths of Abe

The game is constantly teaching you how to play via signs, maps, stone tablets and fireflies. I found this style a little distracting and inconsistent. If signs are going to be the way to teach me, fine – stick with that and don’t switch to a mix of signs and stone tablets later. It also doles out the lessons fairly slowly, so by the third or fourth stage you’re still being taught how to use Abe. This seems a little late in the game but effectively does add variety. It is easy for instructions to be a distraction though, or to be missed entirely when you’re concentrating on Abe’s movements through a tricky area, particularly if you’re new to the series – for example, I completely missed a sign on Abe’s chanting abilities early on, and was leading my friends to a portal without opening it, and hence not completing their escape. 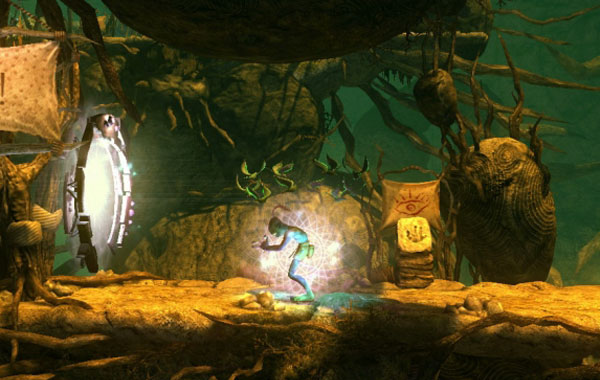 How a portal should look once opened

Once you know it’s there, chanting is one of the most fun parts of the game though. Apart from opening portals to save your fellow Mudokons, you can also use chants to heal yourself, or to open portals to secret areas. Even better, chanting can allow you to possess the evil guards known as Sligs (the robot roach creatures). There is nothing more satisfying than taking over a Slig and spraying his own allies with bullets, bwahahaha! Ahem. 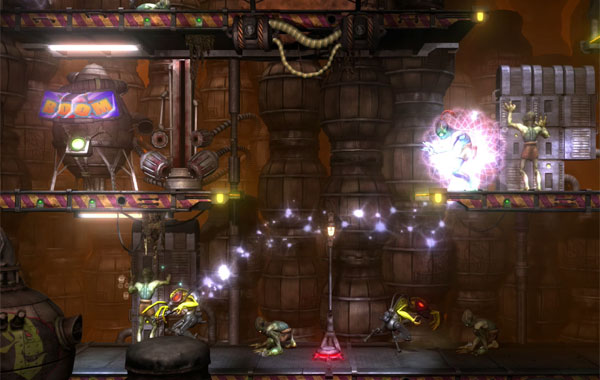 For a game about slaves and meat-grinders, there’s a fair amount of humor, from Abe’s farting abilities to the prisoners who mutter to themselves about working on the job, like good-natured creatures despite the slavery. I particularly love the way they rush in to clean up the mess when Abe is blown up, shot, electrocuted, eaten, or splattered – they seem very well-trained.

The game looks great on the big screen, or on the GamePad, and the 2.5D style makes good use of the camera’s zoom and rolling techniques. Compared to the original game, this version looks sharper and cleaner, with the original’s more realistic art style looking much grittier and bleaker. Fans of the original may not necessarily appreciate this change, but the developers have added a setting allowing you to adjust the graphics to a certain extent, and I found myself preferring the cleaner lines of the new style. 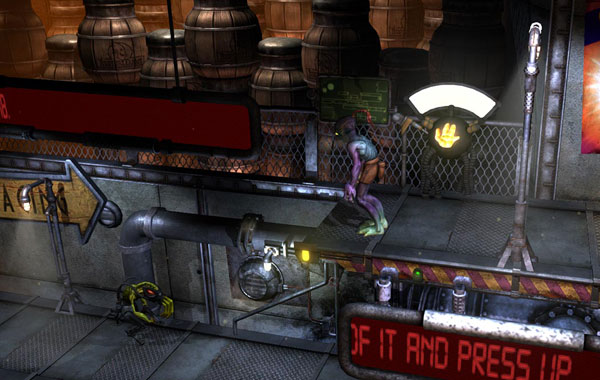 My only disappointment is the lack of GamePad support, since the GamePad acts solely as a copy of what’s on the TV. Actually, less than a copy since many of the cut scenes lack sound on the GamePad for some reason. There are simply no touch controls at all, not even on the menu screen. This seems like a missed opportunity, especially considering the length of time to port to the Wii U – some bonus Wii U puzzles using the GamePad would not have gone astray.

Overall, I had a lot of fun with this game and can easily recommend it to new and old fans alike. Apart from the lack of GamePad innovation, and a few oddities with the tutorial style, this game is definitely worth checking out.

A great new version of a classic game, with improvements to encourage new players, and extra content making it worth playing again.