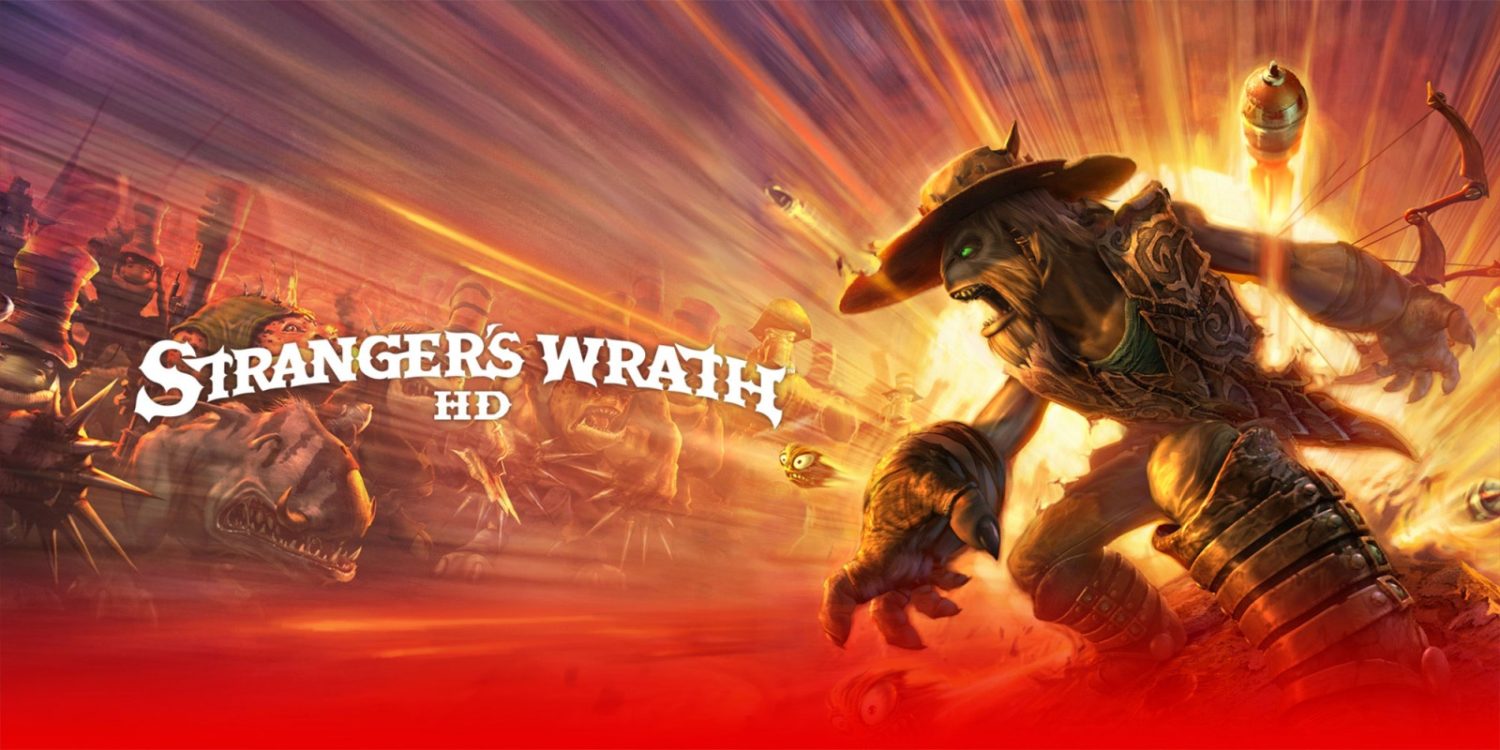 From Mudokon and Glukkons to Clakkerz and Grubbs, this is the odd world of Oddworld. As a long-time fan of this series, it was a pleasure to revisit this reality’s version of the wild west, in Oddworld: Stranger’s Wrath. You are the Stranger, a mysterious bounty hunter who is fighting for, not only the betterment of the people, but for his own well-being, as you discover he needs all sorts of moolah for a life-saving procedure. As you capture desperadoes and miscreants, you will meet all sorts of colorful characters along the way. The Oddworld series is well-known for its M-rated, dark humor, following a similar tone to Conker’s Bad Fur Day with grizzled creatures of all sorts. Oddworld: Stranger’s Wrath continues that tradition.

This tale of trials and tribulations begins as simply as it could for a bounty hunter: a man with a price on his head. After making your first few captures of lowly ne’er-do-wells, you discover the mountainous pile of moolah (the game’s currency) the Stranger must gather to procure treatment to save his own life. It is a mystery what that surgery consists of specifically, but know that you must kick it into high gear in order to gather enough funds. From here, you continue the grind of moving from area to area, taking down baddies and delivering their head honcho to the local barred establishment. The story is slow for a good portion of the opening hours, but quickly develops into a fight to save several entire races from destruction, which just so happens to be the plot of most Oddworld games. Oddworld: Stranger’s Wrath doesn’t change the playbook with its style and vision, relying on similar tropes and comedy so that a lot of what you see feels familiar if you’ve played any of the other titles. However, this is the first time Oddworld has taken more of an action-oriented approach versus the puzzle-platforming-dominated gameplay of previous entries.

Oddworld has taken on several shapes and forms in its history. From the original’s 2D visuals, to Munch’s Oddysee being moved to a 3D landscape, to Stranger’s Wrath which continues that format. What sets Stranger’s Wrath apart from its predecessors is the fact that you can now bounce between first and third-person perspective. This is done to allow for more precision and flexibility when it comes to firing your infamous crossbow versus when trying to maneuver properly. From the third person you are given more of your mobile abilities, so switching back and forth is paramount.

The crossbow in question, which is this title’s claim to fame, allows for one of the more unique mechanics that I am shocked hasn’t been copied more closely. You are tasked with gathering up your ammunition from the local wildlife. Through the use of your infinite, lightning-bug ammo supplied to you, you have to shock yourself up some critters to throw onto that there bow-string. Utilizing two types of ammo at a time, each attached to the triggers on the controller, you can create some combinations that are both interesting and useful. From tie-’em-up spiders to rocket bats and flesh-eating, fuzzy boys, you have a lot to work with. Just find the creatures walking about the environment and go to town. Regularly maintaining your ammo is crucial to being able to take on groups of enemies in the various locales in more creative ways. Also, since this is your only form of attack outside of a straight-up punch, you will need to keep on top of your ammunition purely for survival’s sake. This way of playing is wholly unique, and something that sets this title apart from most other games in the genre, even if the gathering of creatures can be tedious at times.

When entering each area, your task is to, first and foremost, wrangle up each enemy you face, alive or dead. Catching these foes alive offers more moolah, so trying the no-kill approach is more efficient. This becomes a critical mechanic when deciding the ammo to use in each situation. Sure, you could launch a ton of Fuzzles at the bad guys and quickly make mincemeat out of them, but when money is on the line and it is way more interesting to take your time and find a more creative vision behind your plan of attack, why wouldn’t you give that a shot? On the flip side, the fact you can rather quickly and easily plow through enemies through more damaging means also correlates directly to the overall difficulty and fun factor Stranger’s Wrath offers. Since there is nothing else holding you back from taking the kill-everything approach, players could find themselves at the end of the game before they know it, with little in terms of satisfaction. Playing outside of what is intended means you won’t have as good of a time in Oddworld.

Unfortunately, this is compounded by the fact that the gameplay loop is somewhat monotonous. The story and characters should keep your playthrough afloat, but going from area to area simply shooting the bad guys, catching them, and taking them back to the jail is a rinse-and-repeat cycle that can be dull at times. I made up for this by giving myself different loadouts with each group in order to try out all the different combinations of weapons, but in 2020, a kickass crossbow won’t be enough to maintain this loop.

Puzzles are a gameplay mechanic that Oddworld uses regularly. However, if you’re used to gathering up Mudokon in order to open a gate, or utilizing various weight-and-physics mechanics to complete tests, then you will be sad to find out that Stranger’s Wrath is much closer to a straight-forward FPS than its previous entries. Beyond the basic environmental puzzles, you won’t have much in the way of long-form, step-by-step puzzle solving. And even then, the puzzles in Stranger’s Wrath are, to be blunt, unfair at times. For example, in one of the earlier quests you are tasked with taking on a fortified base filled with enemies. They are stationed across the wall and have barricaded themselves in. How do you enter this domicile in order to fetch that bounty? Well, you better have a keen eye or some glasses on, because your only point of entry is to walk all the way around to the far side of the area, look at the back-side of a random pillar, notice the boards holding it together, and decide that that looks like something you could shoot at.

These hyper-minuscule clues to puzzle solving continue throughout the game at various junctures where, without any sort of previous teaching, you have to recognize something a bit off in the environment and try some things out with it. In Super Mario Bros., for example, you are taught in the first ten seconds that Goombas are bad, blocks can be broken, and ?-blocks can sometimes contain power-ups. I just felt like the puzzles in Stranger’s Wrath try to be too clever or hidden at times, causing a wall to be built in front of the player’s progression.

Being launched on the Xbox originally means that Stranger’s Wrath looks overly dated and rough around the edges. Now, let me be clear: if you are nostalgic for more old-school graphics and don’t mind the blurriness and lack of detail, then this won’t be an issue. I personally didn’t mind it at all, as I love this series and have for many years and knew what I was coming back to, but I can’t help but notice the age is dripping out of every pore. Even with the updates and HD-upgrade, you will most definitely be able to tell this game was made fifteen years ago, a new coat of paint or not. So for those graphically minded individuals looking for top-notch, power-boosted titles running at ultra settings, Stranger’s Wrath will probably give you the shakes. With that being said, this is all mostly true of the environments and buildings, whereas the creatures and characters hold up surprisingly well.

All in all, Oddworld: Stranger’s Wrath won’t be for everyone. If you like dark humor and interesting world-building, then this title should get you excited. Also, the crossbow mechanic is by far one of the most intuitive and ahead-of-its-time design features you can find in gaming, so just taking this as an FPS with a good story means you should find yourself having a great time in the end. However, lacking puzzle mechanics, dated graphics, and a monotonous gameplay grind will keep some from being mystified by this weird world.

Oddworld: Stranger’s Wrath offers one of the coolest reload mechanics in gaming history when it has you rustle up your own ammo. Lack of interesting puzzles make this feel more like an FPS with a good story when compared to previous entries in the series.