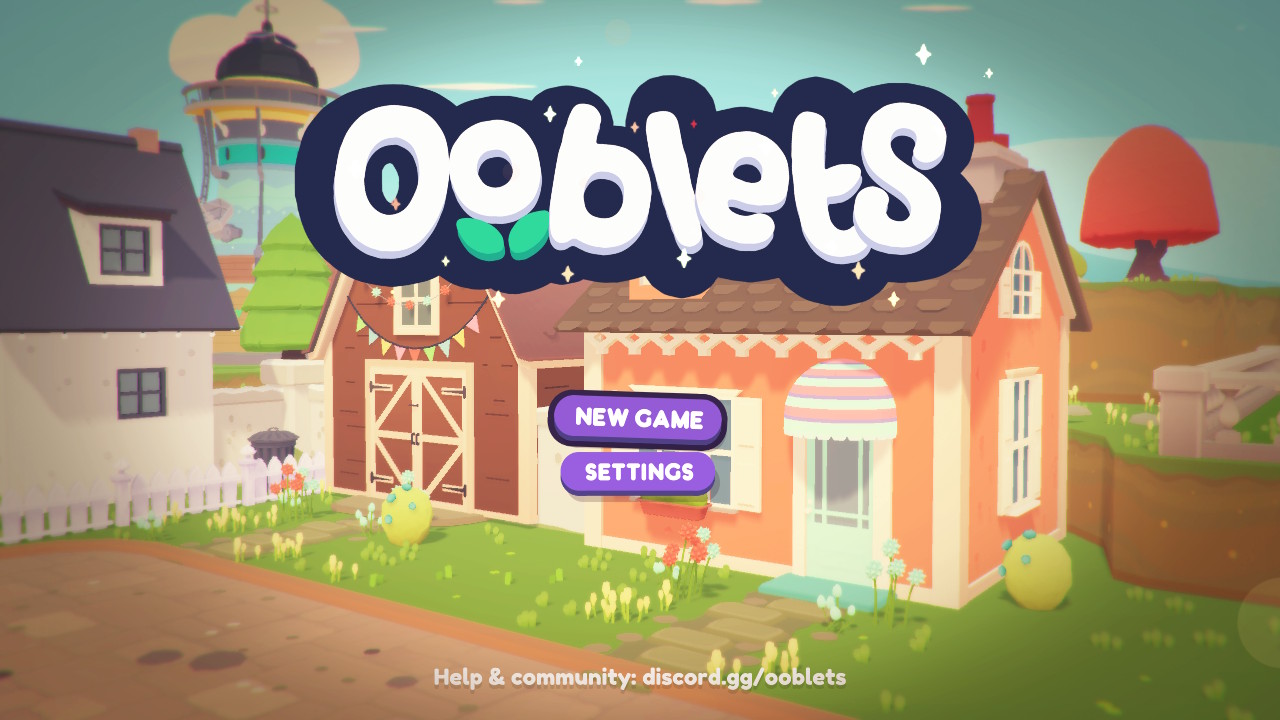 Ooblets is a role-playing simulation game developed and published by Glumberland. This game provides friendship building, farming, and adorable dancing creatures. What more could you want? Well, more is given because there’s a lot to do in Ooblets. But is it too much? Let’s discuss this game’s many features and how they hold up. 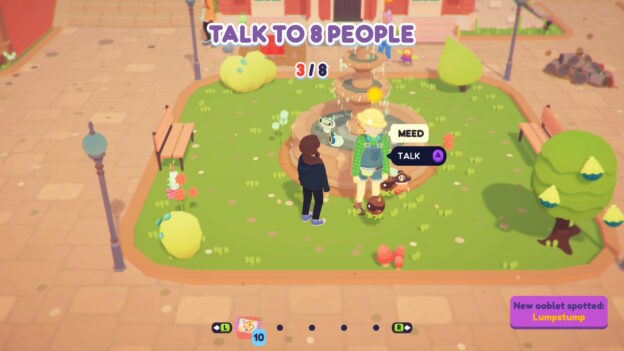 There are many moving pieces to this game; honestly, I think it’s too many. There’s farming, various side quests, town progression, Ooblet dance battles, and more. Each feature is done well, but it gets overwhelming quickly, especially when you first begin. The game focuses less on a solid story and is more of a collectathon.

You collect Ooblets, badges, friendship stickers, recipes, crops, clothing, furniture for your house, and much more. Usually, I don’t mind collectathons. However, the items you collect have no purpose or multiple uses. It gets to the point that you’re unsure how to utilize them first. 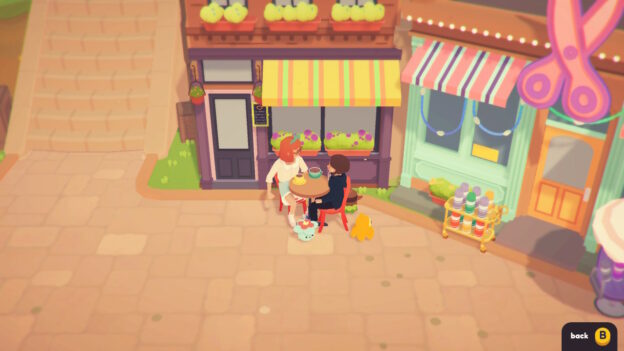 Let’s take the friendship stickers, for example. There are many people in Badgetown, but only some of them have a white dot above their head. This means you can earn friendship points with them (in other words, I don’t bother speaking to anyone else in town). To earn these points, you need to talk to them daily. After a few days, the meter will fill and they’ll give you a sticker. But the dialogue is often useless, so I only spoke to these people to earn the sticker, which I couldn’t do anything with. It felt pointless.

In some cases, they’ll ask you to help them with something. If you agree, you’ll earn extra friendship points, and they’ll give you a gift. The problem is that you can’t make any points with them until you complete their request. Even if it takes you a few in-game days, they’ll only ask about their request whenever you try to talk to them. When you finally give them what they want, they’ll reward you, but sometimes these rewards cancel out the request. For example, there were multiple times I’d need to give them X amount of planklets (sticks), and what would my reward be? Ten plankets. 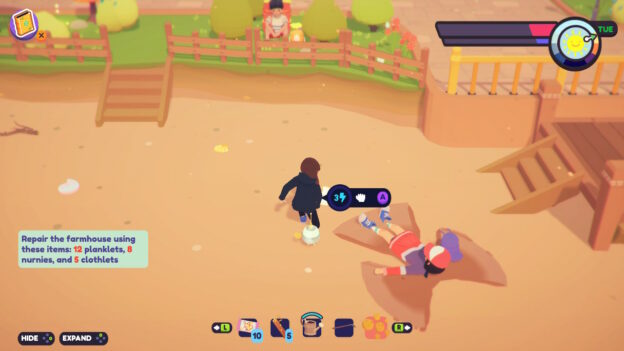 Speaking of plankets, these are one of four significant resources used in the game. You can find these resources by clearing your farm’s weeds, rocks, and sticks. Sometimes there are rewards for completing a particular side quest from a townsperson or by completing an upgraded building. They’re few and far between, though. Plankets are the most common, nurnies are common, clothlets can be hard to come by (you can grow them in your garden, but the seeds are expensive), and oobsidian is rare.

The game recognizes this and allows you to get clothlets and oobsidian from the fountain in exchange for wishes. Yes, wishes are something else you earn by winning dances at the dance barn or completing tasks. Each day, a new set of three tasks is available for you to optionally complete. Some of these tasks are as simple as talking to a specific person, some are more complicated. For example, one of my tasks within my character’s first week in Badgetown was to upgrade my house. The first house upgrade costs 2,000 gummies (the currency in the game). But making gummies is extremely difficult, especially in the beginning. 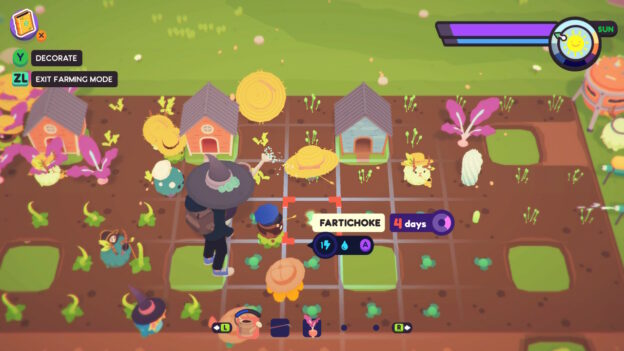 Growing crops on your farm is great to earn gummies, but it’s not as simple as selling the harvest and then growing more. This is because everything in this game has multiple purposes. So, I often hoarded all my items in case I needed them. Or, I never had enough of something because it was used so often.

For example, caroots (carrots) can be grown and sold for gummies in the garden shop. Or, you can make various recipes with it, such as caroot cake. Sometimes the cake is needed to fill a request from someone in town, or you’ll need to add it to the deposit box to upgrade a building. You can eat the cake to gain extra energy. Or, you may need that cake to get into a wild dance battle with Ooblets.

Ooblets and their dance battles are a huge part of this game, but I haven’t talked about them much. The reason is that I didn’t often utilize the dancing mechanic.

Ooblets are various dance-loving creatures you can grow in your garden. They have many uses, such as remaining on your farm, being placed in Oobcoops, or up to eight of them can follow you around. These ones will be part of your team when you enter dance battles. 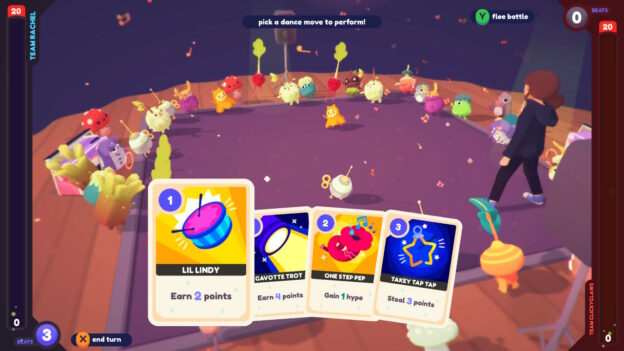 You can have dance battles with wild Ooblets around town. However, each Ooblet wants a specific item to dance. This may be a resource such as plankets, a type of crop, or particular food you’d make from a recipe. This made it difficult to dance with certain types, especially at the beginning of the game. Also, some of these items are hard to come by or take time to create if you don’t already have them. And the Ooblets that appear change every day.

When you do a dance battle with a wild one, the team leader will give you their seed to grow if you win. Then, you’ll have that type of Ooblet. You can also enter dance tournaments once a day at the dance barn in town. If you win three battles, you get a prize, which changes daily. Finally, you can battle against other people outside Badgetown to progress the story, helping the people around town and upgrading the buildings. 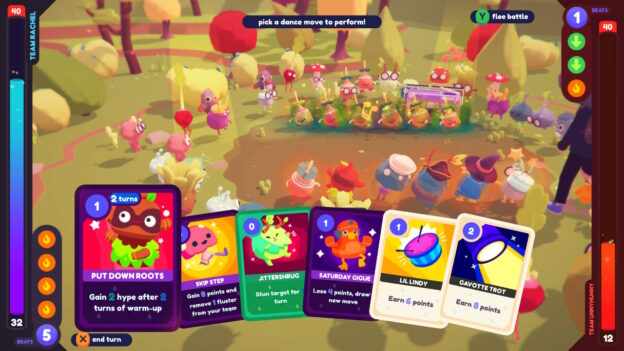 The dance battles, which acted as a strategy card game, were fun but became too easy after a while. The goal is to earn a certain amount of points before your opponent does. Each card is its move that can make you points or be used to help your team or hinder the opponent. For example, you can earn hype which allows you to earn one extra point on point cards. On the other hand, you can also get fluster from your opponent team, which is the opposite of hype. 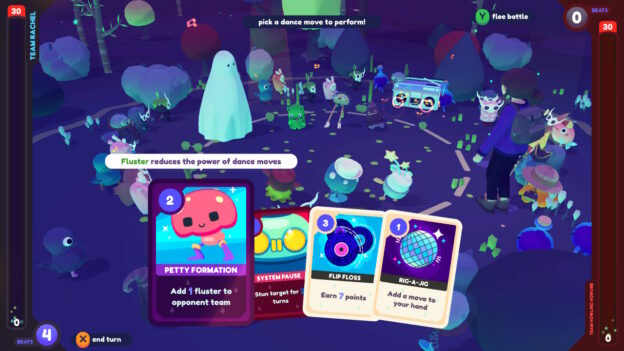 In addition, the Ooblets will earn experience points (whether you win or lose the battle) and gain new cards during certain level-ups. Every Ooblet has unique cards they can use, so putting together your team is part of the strategy.

However, oobcoops allow you to add more of these creatures to your farm. Each oobcoop can hold one creature unless you level it up. They can be leveled up five times, eventually holding five Ooblets each. When these creatures are in their coops, they’ll help your farm. For example, they’ll pluck weeds, water the plants, give the crops a growing boost, and more.

The problem is that oobcoops take planklets, clothlets, nurnies, and oobsidian to create (and for every upgrade). Not all of these resources are found easily, so gaining oobcoops is difficult. Without enough oobcoops, there was no point in getting more Ooblet seeds to plant because I couldn’t harvest them. 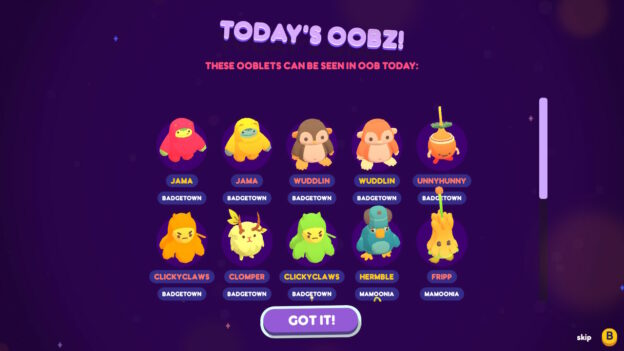 Also, the creatures inside oobcoops will only help the crops within one square surrounding the oobcoop. I thought upgrading the oobcoop would increase the range, but it doesn’t. So, if you want Ooblets to help cover the entire farm, you’ll need countless oobcoops. Before you know it, you’re playing the game solely to grow and earn resources for oobcoops for Ooblets to help you grow these resources. It’s a vicious cycle, and you can easily get sucked into it without bothering to do anything else in the game.

I did enjoy my time with Ooblets. I liked the gardening part, and the dance battles were fun for a while. But the longer I played, the shorter my play sessions were because it became stressful. I either had an abundance of resources that I didn’t need or not enough of one resource that was needed for five different things. 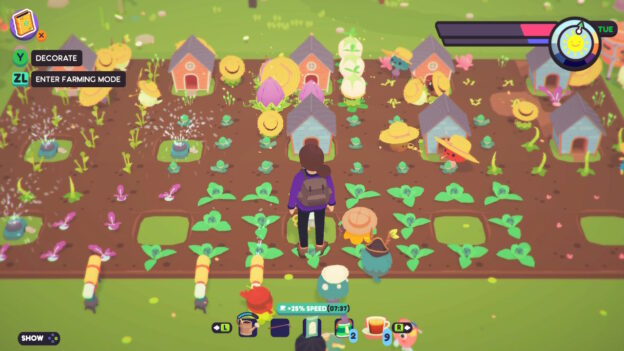 The game itself is upbeat and colorful. The characters glitched here and there, but it ran smoothly for the most part. The town was fun to explore, and the character designs were cute, but I don’t have a favorite character because the dialogue seemed more like filler than anything else. The music is probably my favorite part of the game. While exploring the town, there’s a serene song playing that reminds me so much of Animal Crossing music. Also, the songs for the dance battles were undoubtedly fun, upbeat music. I will get the soundtrack to the game if it’s available.

Overall, Ooblets is a fun game. You’re meant to take your time with it, but it can sometimes be frustrating. I think they overcompensated in their effort to stand out from other farming sim games and provided too many things to do.

Ooblets is a fun game that will keep you busy for days. But some parts can be overwhelming and feel unbalanced at times.