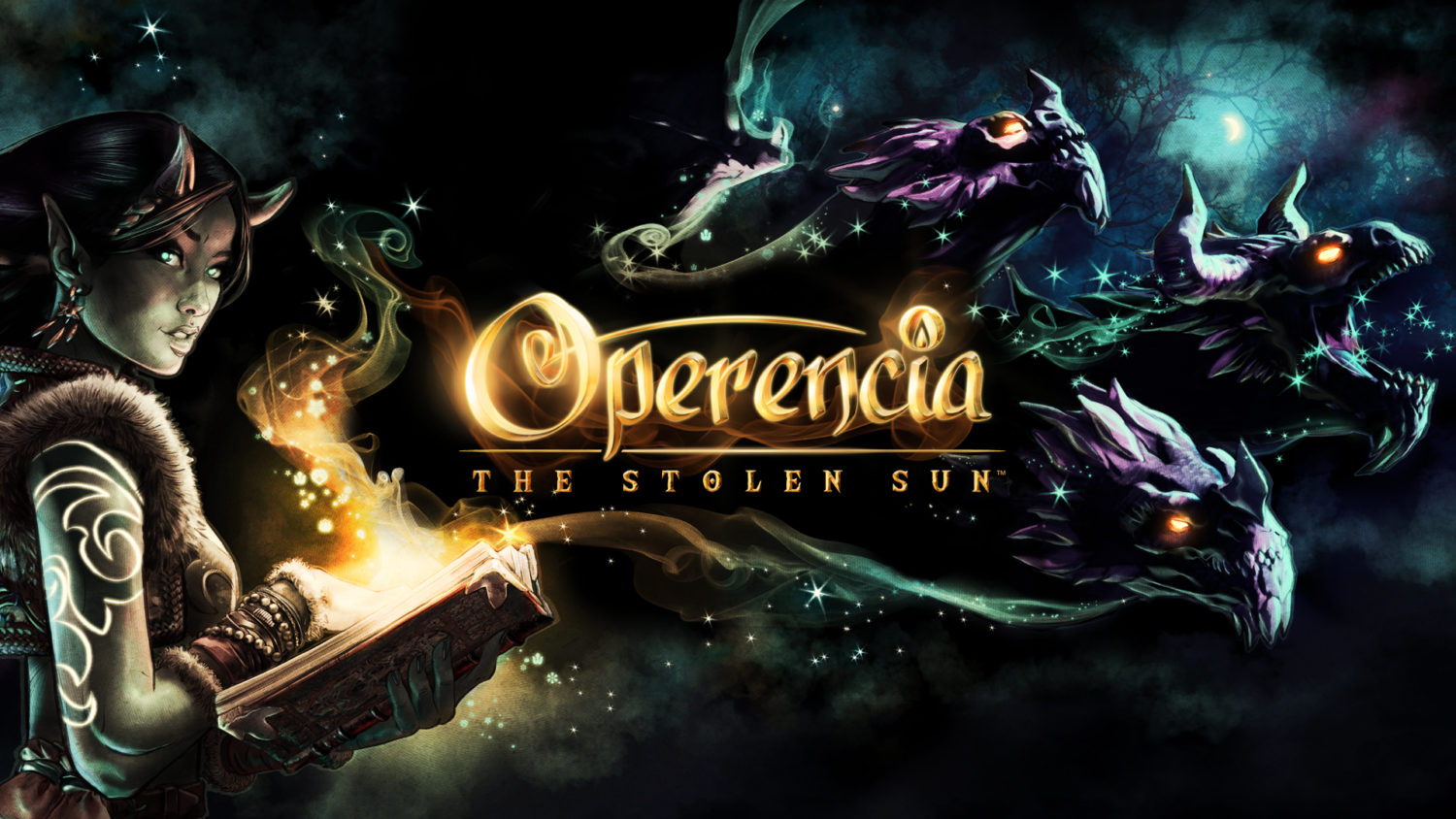 The best way to crawl a dungeon is still one square at a time.

In the land of Operencia, you get to enjoy some fresh air out of doors and hanging out with some friends (enjoy it where you can these days). On the down side, there is a cursed castle which needs to be explored. Oh, and don’t forget the dragon.

If you are not familiar with any of the other platform releases of Operencia, this is a straight-up turn-based RPG; you even get to do some actual (well, in-game actual) dungeon crawling.

As with a lot of the games for the Switch, this looks better and is easier to play on your TV than in the Switch’s handheld mode. Indeed, the game looks very good with interesting scenery, detailed dungeons, and lots of lovely monsters. The art ranges from novel forest scenes to dungeons with water on the ceiling, and the water effects are well done. Even the torches include details like embers floating away and the heat shimmer in the air above them. 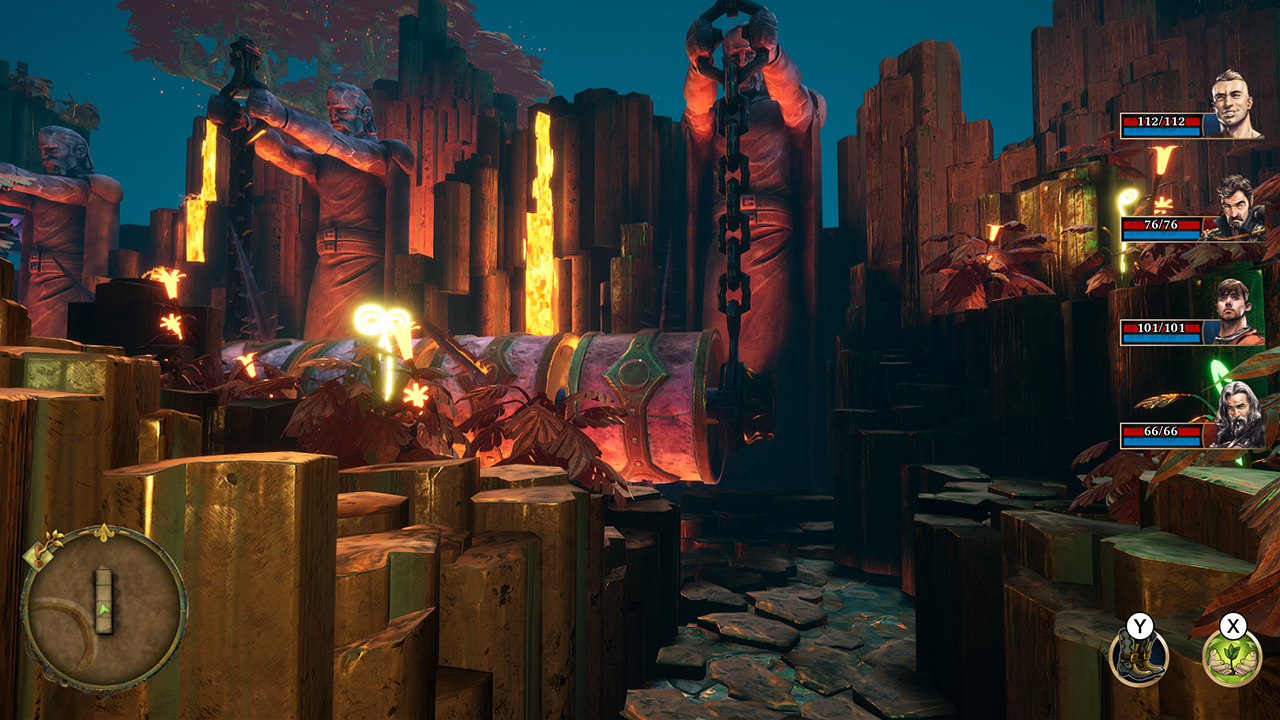 Getting started is a bit odd; when you first launch the game you will play through a prologue before you get to the start with your real avatar. It was a bit disorienting to play for a few minutes with one set of characters only to have to start over with a new character, but if you know it’s coming (and now you do) it’s just a warm up for the main event.

Operencia has a fairly standard back story; you are the intrepid young nobody who received a vision in a dream. Now you are following your dream into a great adventure. Along the way, you meet some interesting characters and make alliances to battle monsters and defeat the big bad guy at the end of it all. While this path is fairly well worn and the dialogue is fairly predictable, the game does a good job of engaging the player so getting there is worth the time spent playing. 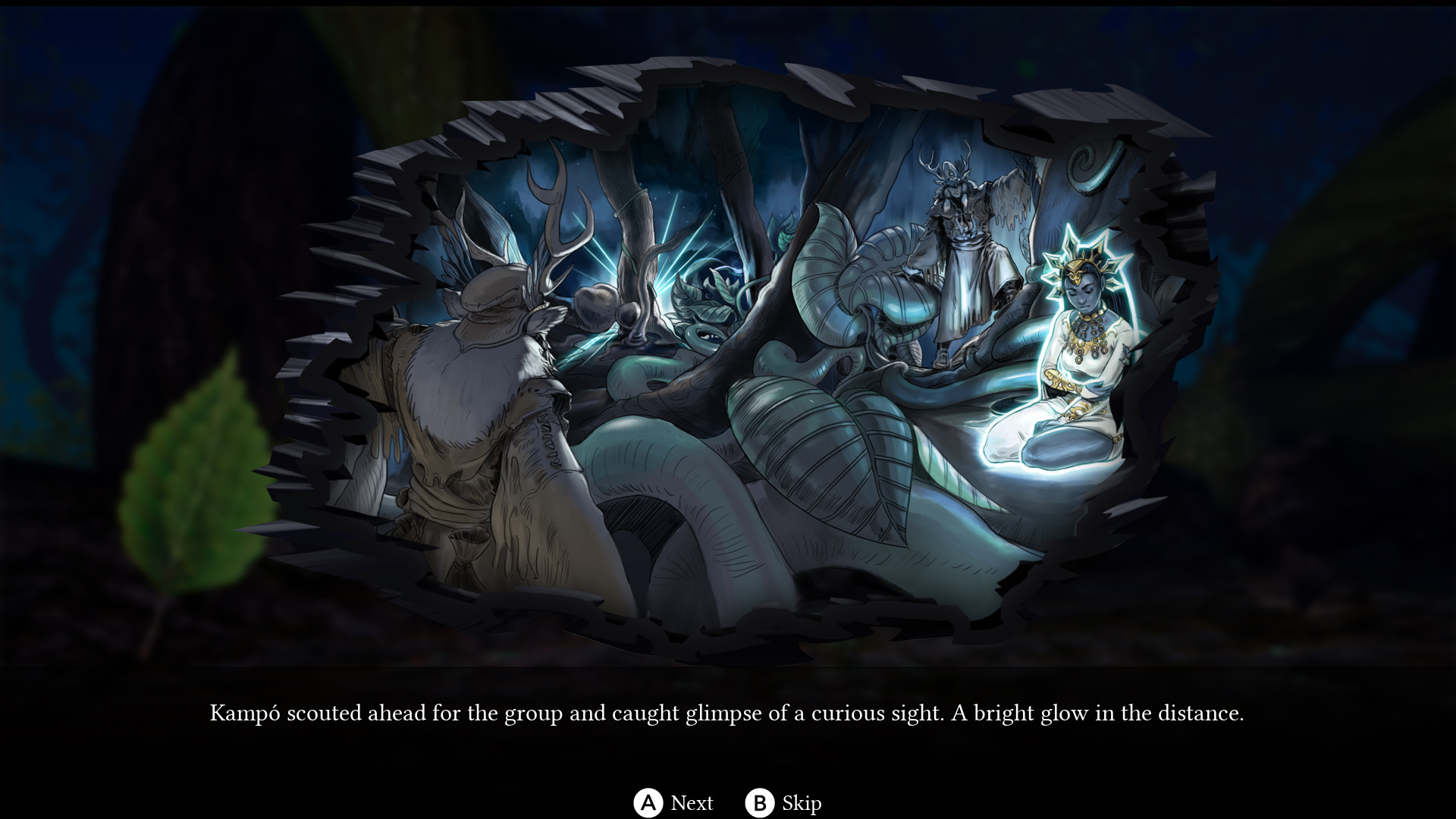 Once you are engaged in the story proper, the game does a decent job of introducing new elements and combat difficulty in a gradual way so you can get used to playing without dying frequently. The first “level” is the cursed castle where you get to battle some skeletons (very important at PN, those sword wielding skeletons), frog-man creatures, and the obligatory boss at the end. There are also some puzzles to solve along the way—which combination of levers do you need to pull to open the door sort of thing. The puzzles may not always be real brain teasers, but it does involve a little more than “kill everything that moves” gameplay. 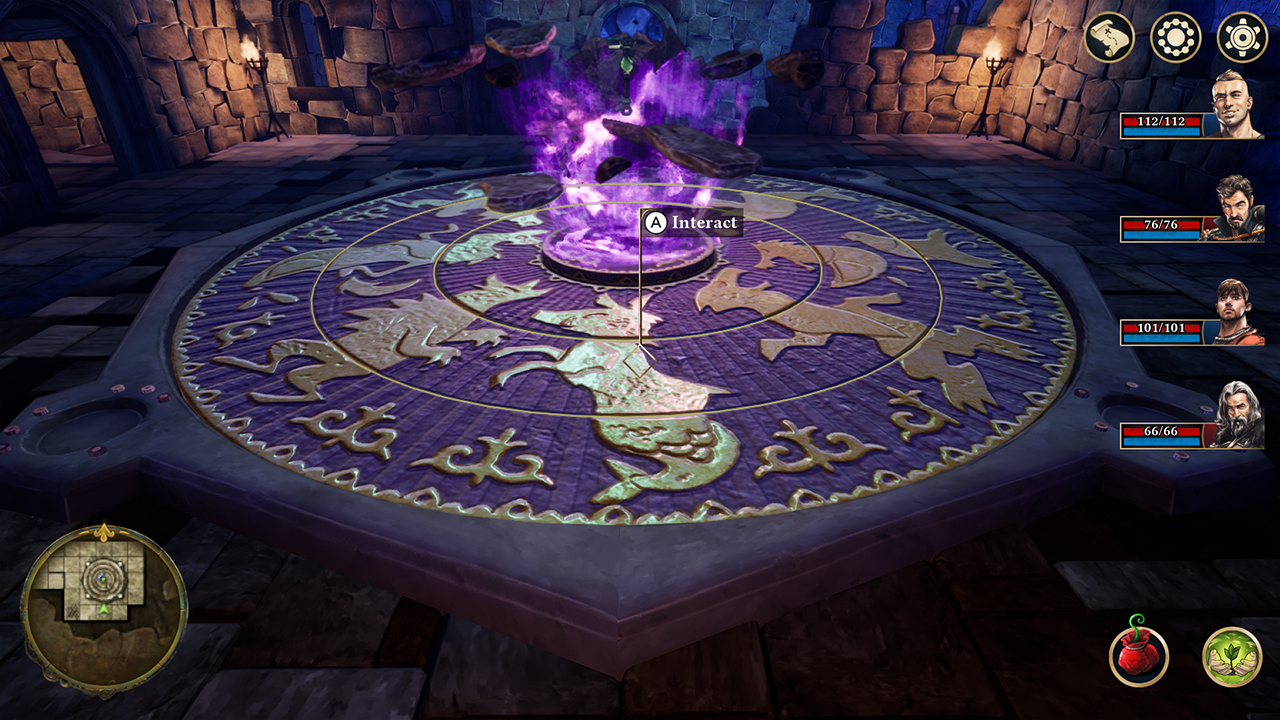 By the way, when you do kill monsters, there will be loot to pick up. The game is not very good at explaining how to equip and use items you pick up, but it is not too hard to figure out. If you press the up arrow button on the left JoyCon, you get the character menu. From here, you can assign new ability and skill points, equip weapons and armor, and so on.

One thing the game does explain well enough is how range works in combat. There are three distances of which you need to be aware: close (melee range), middle range, and distant range. The further away an enemy is, the less effective your melee weapon will be. Inversely, the more distant the enemy, the better your range weapon will work for you. As always with magic attacks, spells don’t care about range. 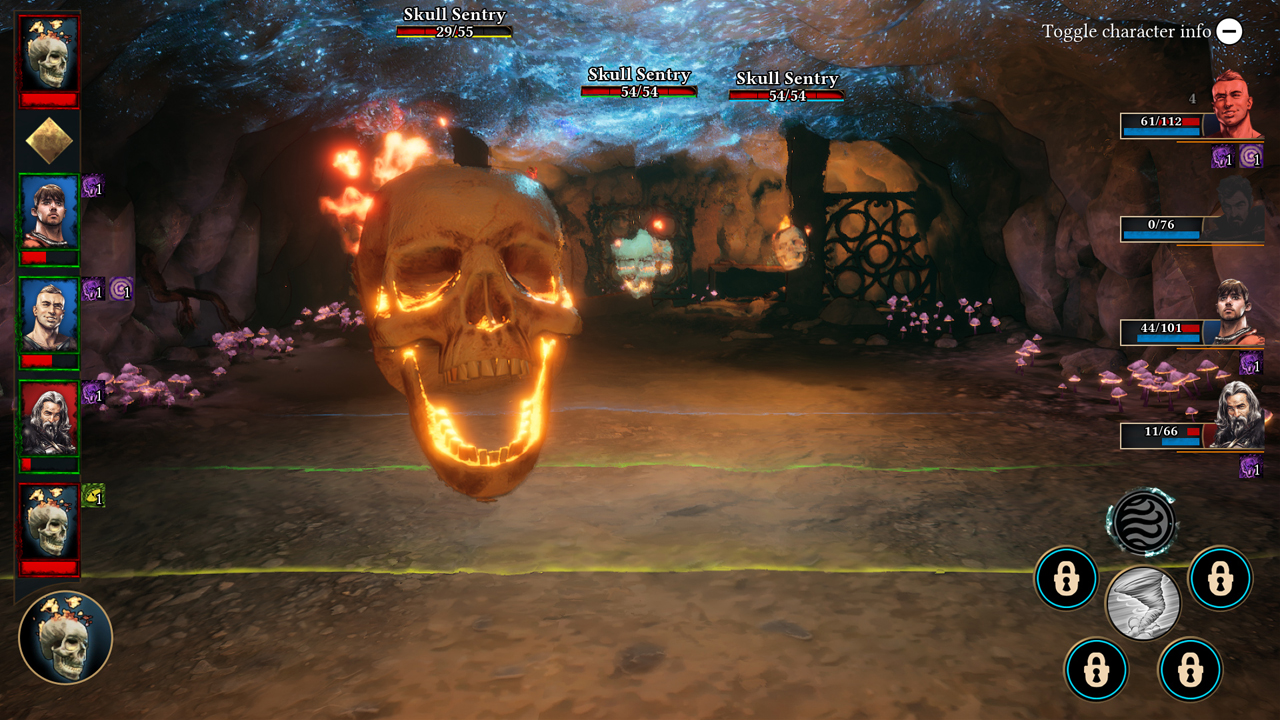 Don’t forget—if you have someone in your party with magic ability, keep a heal spell handy (also known as herbalism). Feel free to use it in the middle of a combat session. No, really—use whatever skills your characters have as soon as you perceive a need. You have herbalism/heal, attack spells, special attacks, etc. Use them quickly and let them recharge during combat. 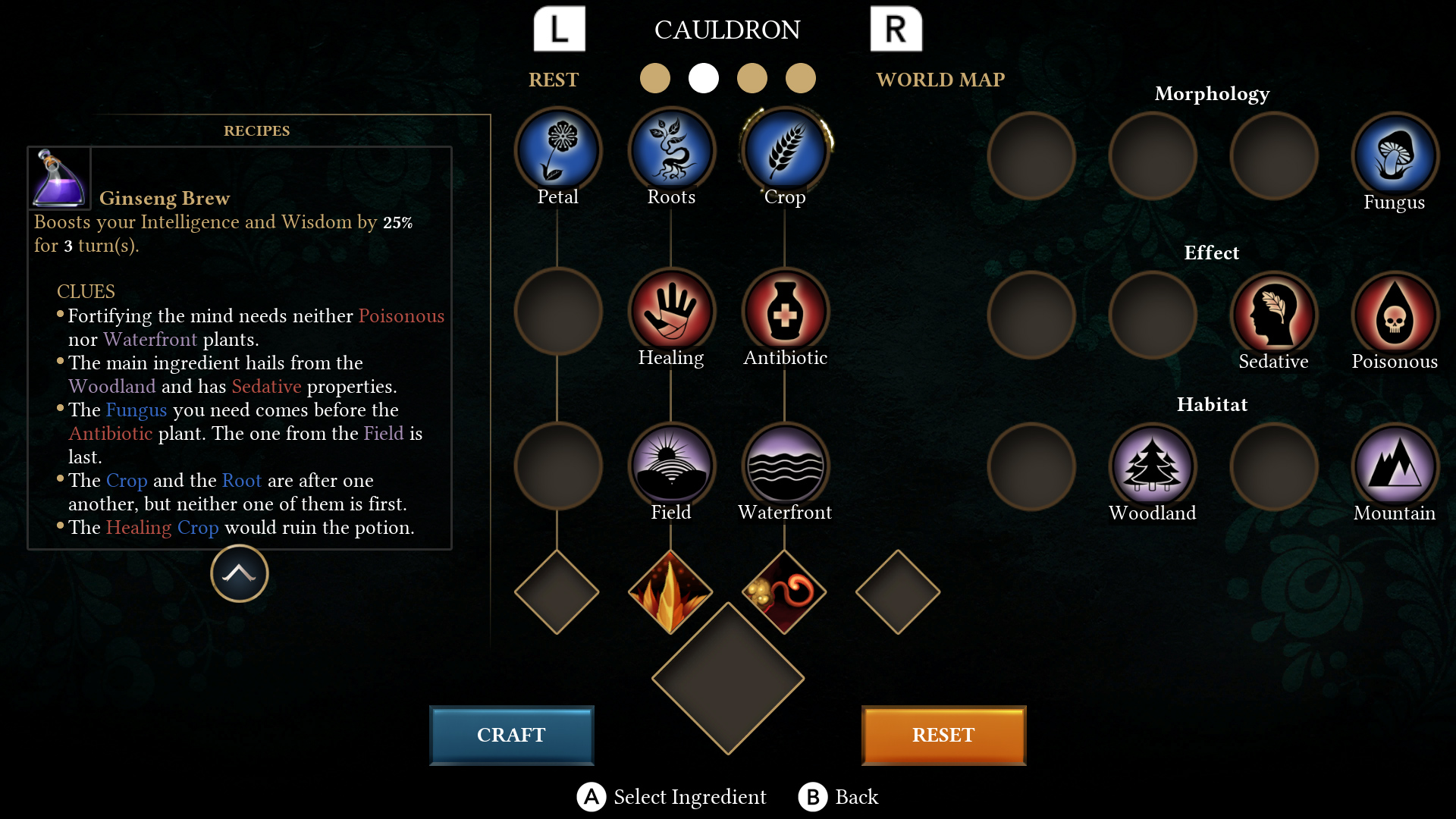 By the way, there is one combat skill which looks mostly useless but can be very handy, and it is called Taunt. This skill can be used (by you and by your enemies) to force a character to attack only the one who used the Taunt skill. If a skeleton uses Taunt then you can only attack that skeleton. This effectively protects the others until you kill the taunter, or the taunt wears off. On your side, you can use this to protect the weaker members of your party and let the tank take the hits.

As noted earlier, the storyline is what may be called “an oldie but a goodie” but after decades of dungeon crawler RPGs, it is getting difficult to come up with anything truly unique. In this regard, I don’t hold anything against the game.

Where the game could be better is the dialogue and voice acting area. The dialogue is a bit too predictable and the voice work is blasé; not horrible, just a little flat. Character interaction with the environment is also a bit less than stellar. While the world looks great, there are very limited elements with which the player can interact. If you scroll your targeting dot over something you can pick up the object acquires a luminous outline. This isn’t tragic, but with many games like this, you can investigate or smash or use almost everything in sight.

This does bring up one gripe. In the first level, you can see weapons racks in some of the rooms in the castle. They look like perfectly serviceable weapons, but you can’t use them. I personally think it would be better to show broken weapons on the floor or to just not show them at all, but that’s just me.

Moving around in the game is based on squares. While you can use the right JoyCon to look around in all directions, including up and down, walking happens with the left JoyCon. You can only walk in one of the four cardinal directions, no cutting diagonally across a room. To help with the square approach, you can use the left and right buttons to turn 90 degrees at a time. For a game which put so much into the visuals, this seems to be an odd limitation; however, once you get used to it the motion mechanics are not too bad. 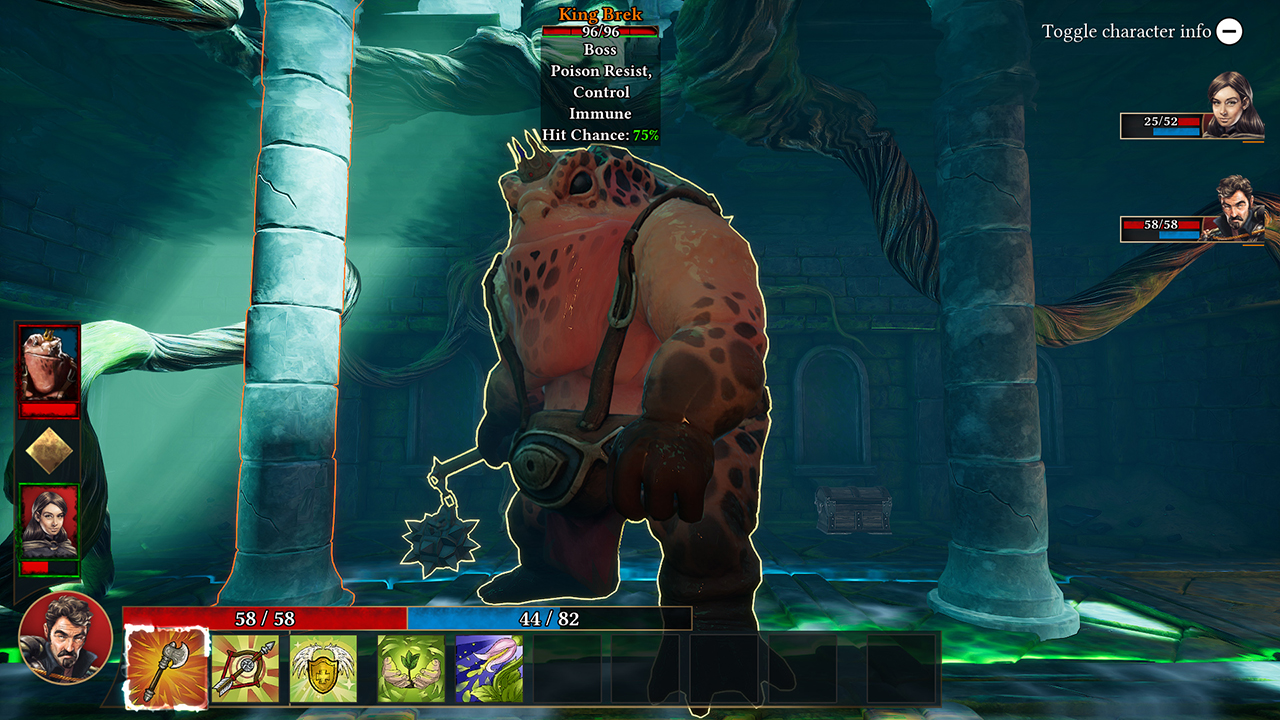 Even with some oddities and limitations, Operencia is a fun game. It isn’t a fast reaction, finger twitching adrenaline fest, but it does engage and hold the player’s interest with good graphics, nice audio, moderately interesting characters, and a story with a few hooks and twists.

To do today: get up, brush teeth, follow strange dream about a deer and head off to the cursed castle to see what happens. Sounds like a plan, so what could possibly go wrong?  Well, we all know the answer to that question, don’t we? In Operencia, you take off on a journey of exploration, adventure, and heroic deeds—not to mention monsters and mayhem. If you enjoy turn based RPGs, this one is worth checking out.