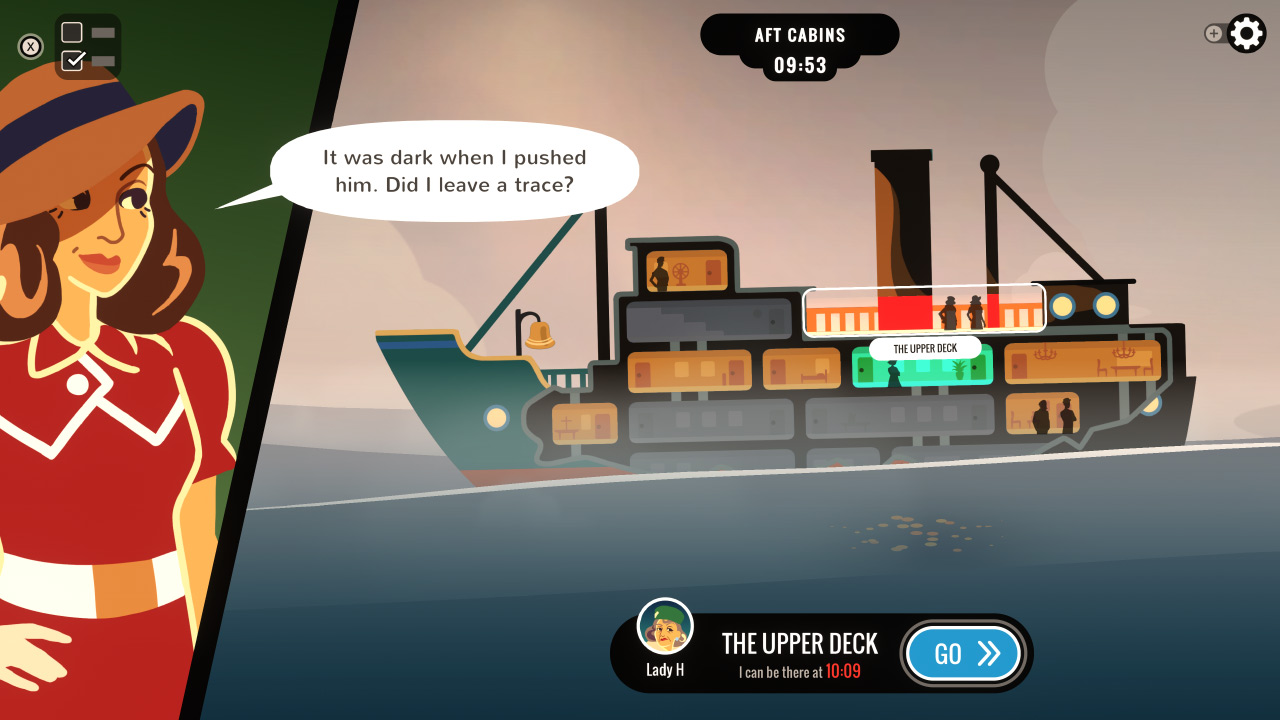 A murder mystery visual novel, Overboard casts you as Veronica Villensey – actress, newlywed and killer. The game opens with you tossing your husband Malcolm off the deck of a ship bound for America in the dead of night.

The next morning, you are woken by a steward at 8 am and have until the ship docks at 4 pm to cover your tracks, establish your alibi and get ready to start your new life in America. Over those eight hours, you can raid the ship for evidence against you and, if you choose, plant it on someone else.

You can chat with the other passengers to gauge what they might have seen or heard overnight. You can manipulate the conversation to your advantage, not only to establish your own innocence but to point suspicion towards someone else. You can even go to the Chapel and talk directly to God. Sometimes the apparently holy voice gives you hints and advice, and sometimes encourages you to see how many people you can murder before the boat docks. 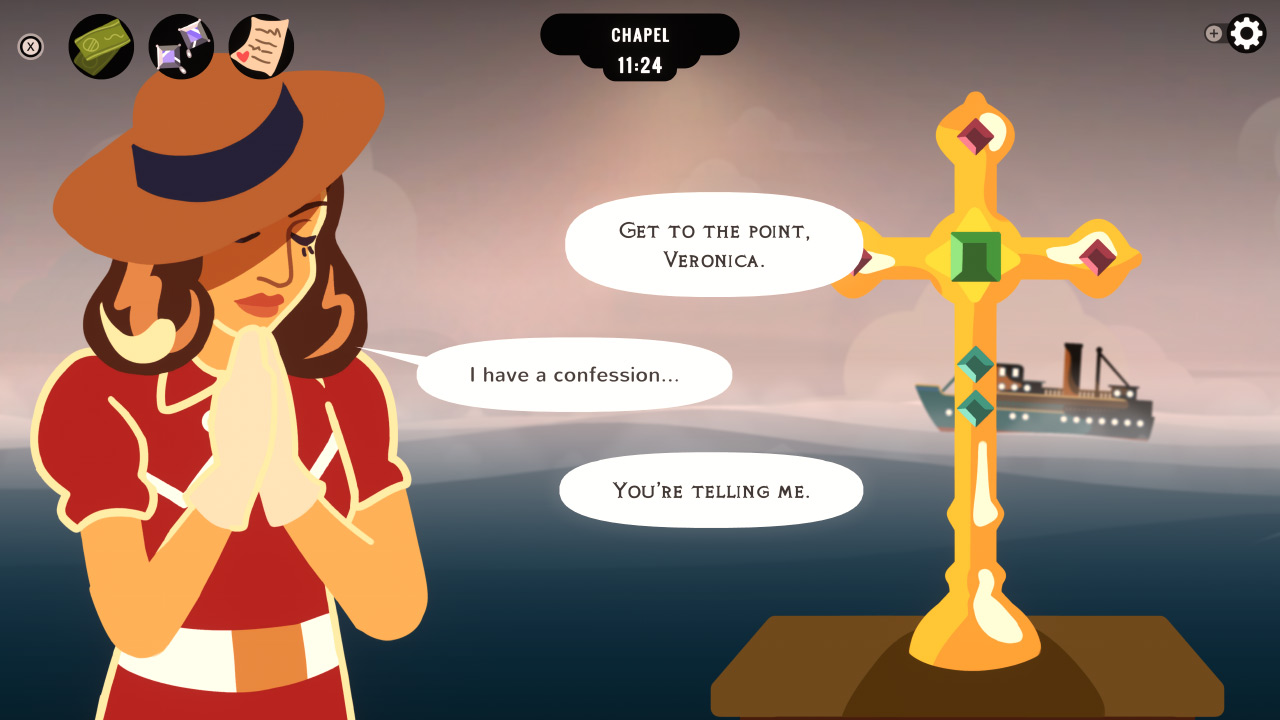 Throughout this process, you uncover other people’s secrets. Some you can use against them. Others might distract from your end goal of getting away with murder, but can make for an interesting and different run through the game.

The backstory of every character is incredibly well fleshed. They’re fairly recognisable archetypes from 1930s-influenced mysteries. You’ll meet elderly ladies with a fondness for strong cocktails, femme fatales in love with a married man and wealthy men who spend their time betting on cards and complaining about their wives. But they’re all given enough of their own unique personalities that it is great fun to dig into their lives and secrets.

You won’t get all of them just by asking. You’ll need to rummage around in their bags and their rooms and find out what other people might have overheard about them in order to get the full picture. You won’t get to bottom of everyone’s mysteries in one run, either. 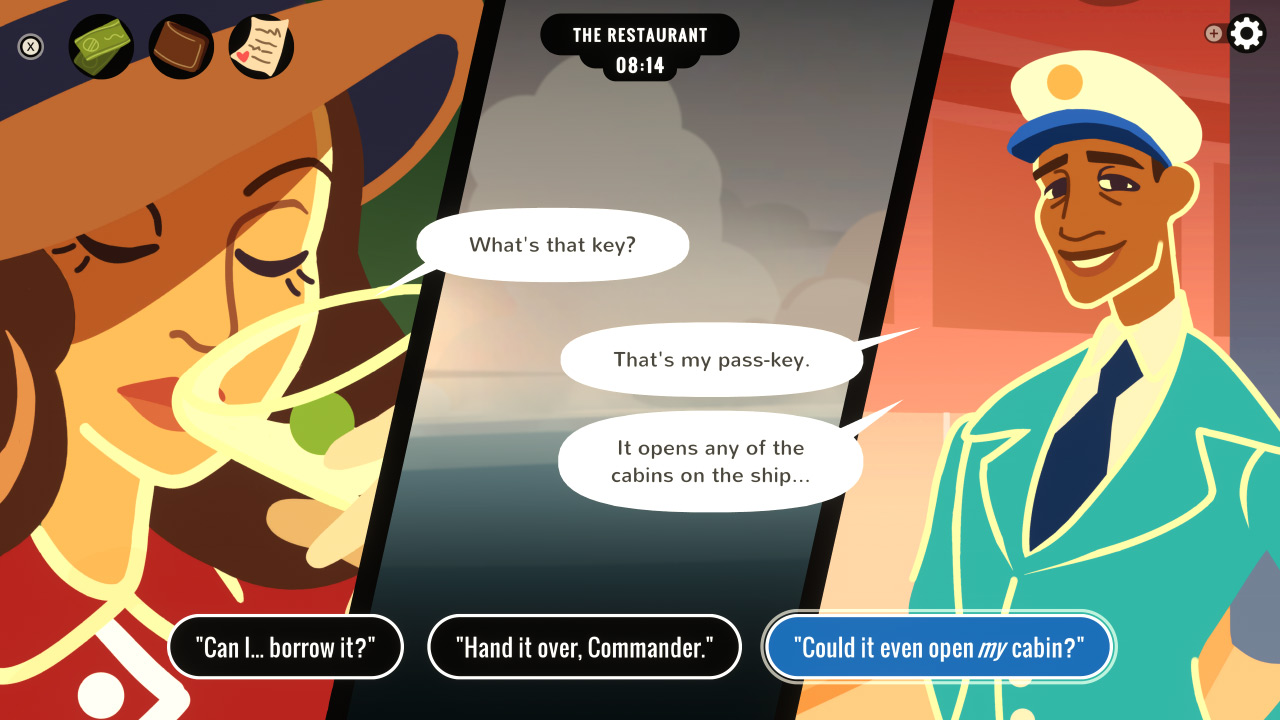 Each play through takes less than an hour. But you’ll need to give it a few goes before you get away with killing your husband. Even then, maybe someone saw you throw him overboard and might blackmail you for some of his life insurance money. You’ve won, but you could go again and attempt to commit the perfect crime.

It’s also worth playing through focussing on each character one at a time, to uncover all the captivating details built into the Overboard backstory. A lot of effort has gone into crafting these layered, intriguing relationships and it’s fascinating finding all the ways you can dig into them. It’s easy to replay and fast-forward through the bits you’ve already tried. The game even helpfully highlights the options you chose on your last run.

Your choices influence the story in a way that makes it really fun to replay. Even when the charges are small, you can reveal interesting new details that weren’t evident before and feel like discovering buried treasure. 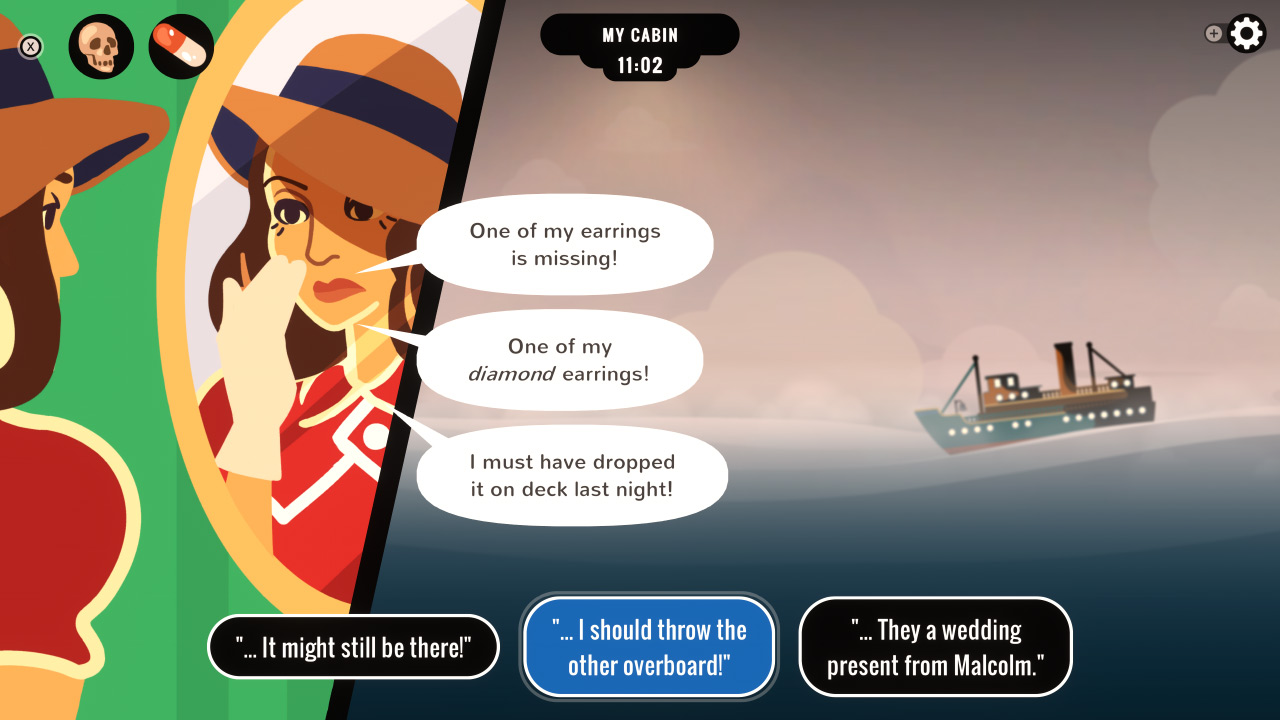 A clock counts down how much longer you have before the ship docks. Unless you’re incapacitated or have thrown yourself overboard to join your husband in a watery grave, each run ends with everyone being dramatically summoned to the deck. There, the murderer (or whoever you’ve successfully pinned the murder on) is revealed and police are called to meet you upon your arrival in America.

Overboard is brilliantly written, with believable dialogue and bewitching characters. The art style is gorgeous and matched perfectly with a swing-influenced soundtrack that grounds the game in the 1930s setting. The way the story twists around your decisions is spectacular and a perfect example of how a visual novel can capture you over and over again.

Overboard is a charming and darkly funny game, with incredibly well-written characters and a great atmosphere of intrigue, secrecy and 1930s style.