Pac-Man is back in an all-new adventure in Pac-Man Championship Edition 2 Plus. First appearing in 1980, and appearing in a plethora of other solo games, remakes, sequels, and spin-offs, Pac-Man is a fan favorite. This game was originally released in 2016, Pac-Man Championship Edition 2 Plus being re-released for the Nintendo Switch, to make use of both Joy-Con controllers for some 2-player fun. 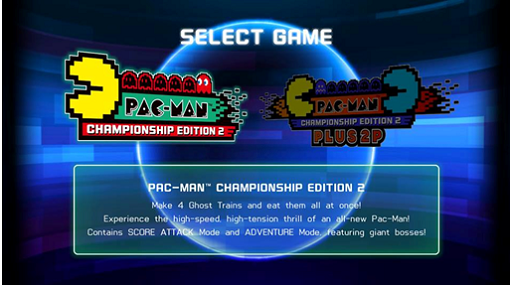 The game is smooth and easy to play, using the left control stick to move Pac-Man around in the levels. That’s about all you have to do, but Pac-Man has a much bigger job. In the Score Attack mode, there are 40 levels to play through – 10 different areas with unique features and four levels for each area.

The different features included a maze-like board with tight, narrow corners, a jumping feature where Pac-Man had to step on a jump button to get from one side of the board to the next, a single train using only one ghost or multiple trains for all the ghosts, and much more. 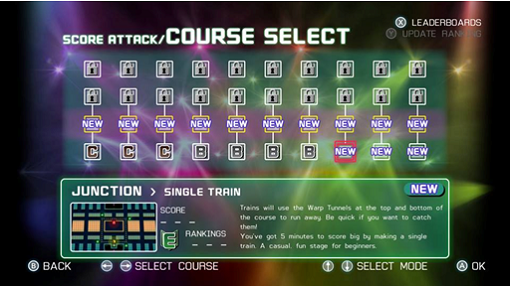 You’re given five minutes to complete a series of boards in each level. Pac-Man must gobble all the dots, gaining points while avoiding the ghosts. There are smaller ghosts sleeping and if you go past them they’ll wake up and create a train with Inky, Blinky, Clyde, and Pinky. After reaching a certain amount of points, you can gain a power-up pill that will allow Pac-Man to chase after the ghost trains and eat them for extra points. Then Pac-Man will grab the fruit and it’s onto the next board, which is bigger and harder than the previous one. 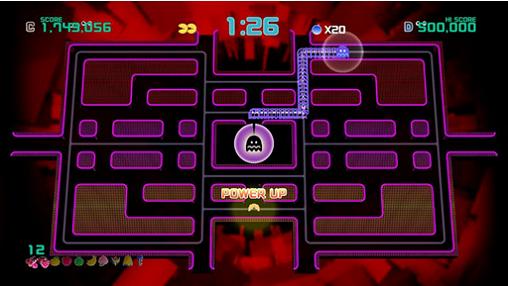 There is an Adventure mode that I didn’t care too much for. It’s similar to Score Attack except you have about 30 seconds to nab the fruit. The timer resets after you get the fruit, but it’s very fast-paced and sometimes, when trying to eat the ghost train, you can’t catch up or get turned around. If the timer runs out once, the game ends and you have to start all over.

Each level can be set on easy, medium, or hard. You can earn up to 3-stars when you beat the level in each difficulty setting. The first round needed 10 stars to move one and I couldn’t do it. I prefer the Score Attack mode where I can focus on beating my previous high score. 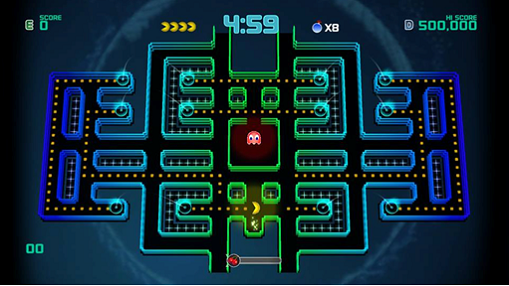 The music and sound effects are catchy to me. I enjoy every moment of each level listening to the music. It really got me into the game and makes each moment tense. The sound effects are nostalgic to me, even though I don’t have much experience playing Pac-Man. Still, who doesn’t recognize Pac-Man himself or the sounds from the game?

The graphics are charming, changing depending on the mode you are playing. Sometimes the graphics look more pixilated, more 2D, or more 3D. I liked it no matter what the graphics look like. The coloring for each level is pleasing to me with the bright, neon colors. I feel as though I was playing an old-school arcade game. 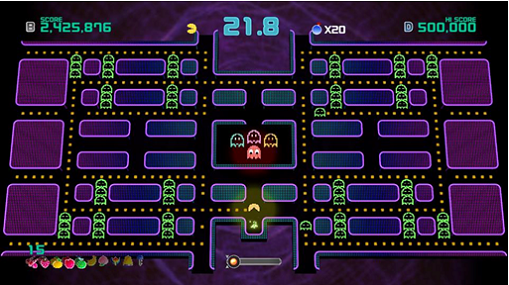 While I have never really played much Pac-Man before now, this game made me wonder why I haven’t tried it before. I found myself saying, “Just one more level…” after telling that to myself for about five or six levels.

Pac-Man Championship Edition 2 Plus is a great arcade-like game that’s satisfyingly fast-paced, yet casual enough to pick up and play whenever and where ever.