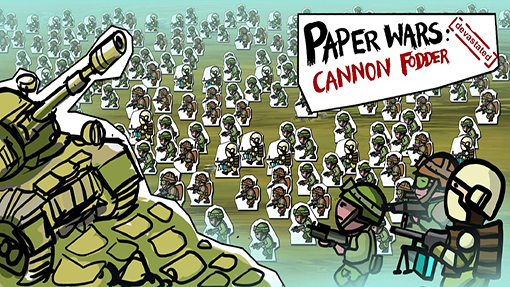 Paper Wars: Cannon Fodder is an action-arcade game from iFun4all. It’s actually a remastered version of the 2011 WiiWare title that involves blowing up paper soldiers. So how does the Nintendo Switch version fare?

Paper Wars plays a lot like a simplistic tower defense game. Various enemies make their way across the screen from right to left, and it’s your job to stop them from reaching the other side. This is achieved by blasting from the sidelines with your tank. 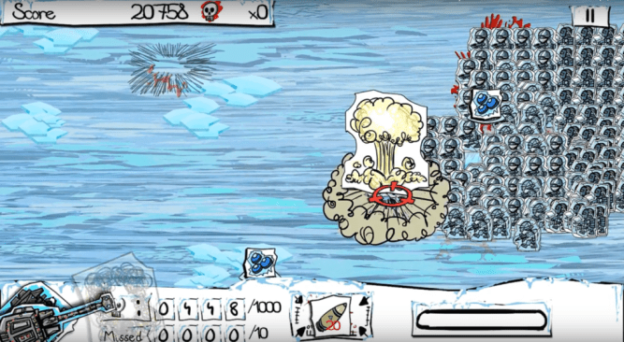 The game starts out with a nicely designed title screen, complete with a paper theme featuring hand-written buttons to select from two modes: Campaign and Survival. You can choose between three difficulty levels for either mode. The easiest, Rookie, is a breeze, so try Soldier or Badass for something more satisfying.

The campaign features 28 Acts, like missions, with a little story of sorts as you progress. There are quite a few typos in some of the stories, which is a little disappointing as it makes the game seem slightly less polished. Each mission involves either killing a certain number of foes or surviving for a specified amount of time. You’re also allowed to let a small amount of enemies pass through before it’s game over. For example, you might have to kill 500 soldiers to complete the mission, with only 50 allowed to pass through. Other missions are a little more specific, since you must target a particular type of soldier and disregard all others. These add some much-needed variety to a fairly simple premise. 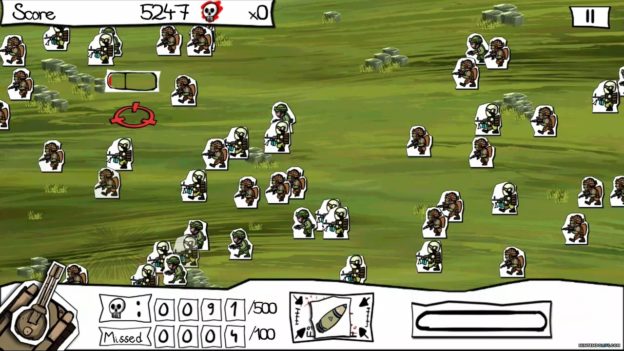 Unlike the WiiWare version, two more modes are available once the first campaign is finished: Frozen and Zombie, each with a survival and campaign component to it. These work in a very similar way to the main game, with 28 more missions to conquer. They’re themed differently and feature new enemies and power-ups.

The beauty of Paper Wars is in its simplicity. It’s extremely easy to pick up and play for short or long stretches. Aim your target with the L stick and shoot with the A button by holding it down and releasing when ready. Though the buttons work quite well, you can also use the touch screen, which feels more natural and intuitive. This was my preferred style of play, though I’d love a stylus – Paper Wars would suit the 3DS really well. 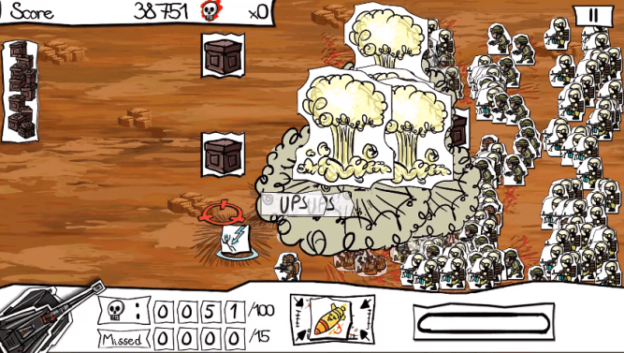 Power-ups occasionally litter the field in place of fallen foes. These bring the game to life with extra weapons such as mines, missiles, or even air support. Other power-ups provide timed effects such as rapid fire for your tank or slow motion for your enemies.

There are a few options for you to tinker with, including sound effects and blood. You’ll want to turn the vibrations off, since they quickly become annoying with their frequency. The sounds themselves are also on the irritating side, particularly the death cries of fallen enemies. There’s a decent collection of statistics to show just about every aspect of your sessions, from the number of each enemy you’ve felled to which power-up you’ve gathered most of and how long you’ve been playing. Even the number of taps and pauses is recorded. Unfortunately there’s no online leaderboard, which would make a nice addition.

Overall, Paper Wars: Cannon Fodder is a strangely addictive experience. It’s a simple game with a few minor issues, but it’s generally fun to play. There’s not much depth to the game, but if you’re after something simple involving shooting things, this might be one to consider.

Paper Wars: Cannon Fodder is a strangely addictive experience. It’s a simple game with a few minor issues, but is also a guilty pleasure that’s fun to play.