A captivating display of action and art.

Have you ever found yourself sitting around wondering what it would be like if someone mashed up Galaga with the Aztec empire? Me neither. But the nice folks at Manufacture 43 have done it and they call the results Pawarumi. 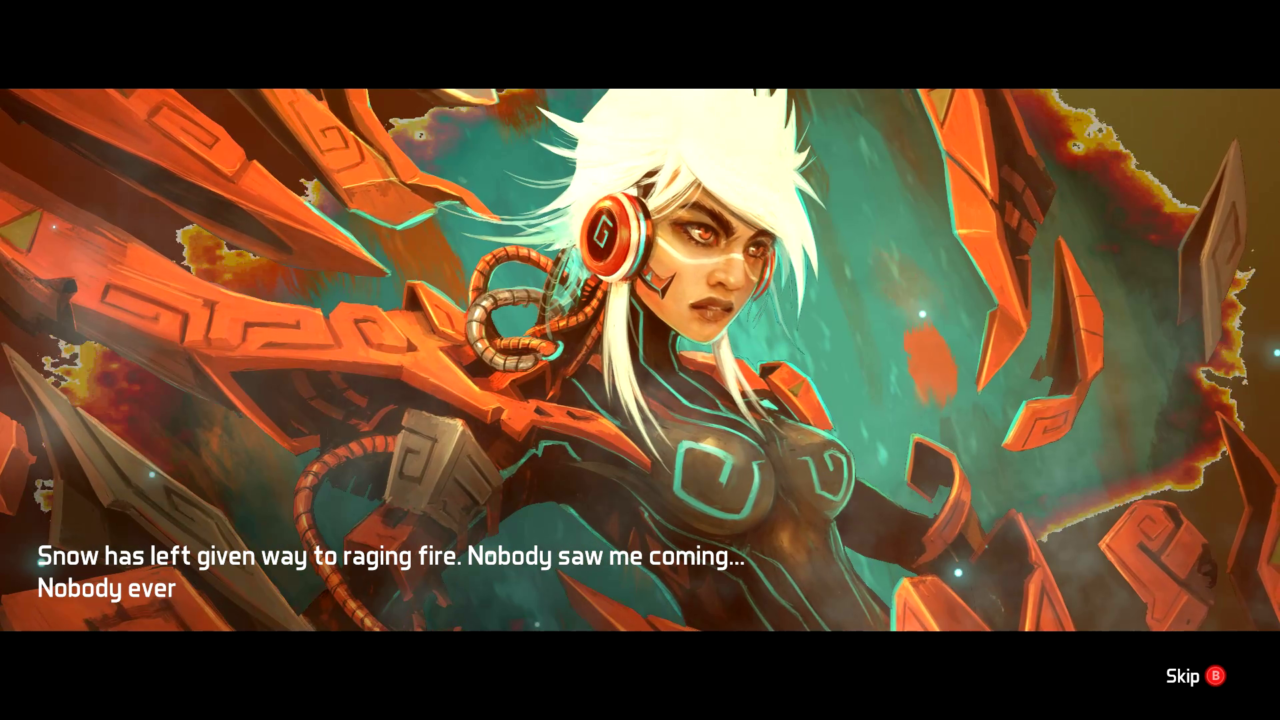 Pawarumi is a shoot-‘em-up with a visual esthetic taken from pre-Columbian, Meso-American art, and the effect is captivating. The gameplay is standard dodge-and-fire, and the theme is you against everybody else. Your ship, named Chukaru, is the most powerful ship in the game world and is armed with three weapons provided by three gods: Serpent, Condor, and Jaguar. The game uses the usual controls—left joystick to move the ship around and ABXY for weapons.

You have shields to complement your killer weapons, but you can only sustain a few hits before you see “GAME OVER” (get used to seeing that, by the way). The aforementioned color-coded weapons are Serpent (green Gatling gun), Condor (blue continuous ray weapon), and Jaguar (red guided missiles). You’re probably thinking “This is going to be one of those triangle weapon things,” and you would be right…mostly. Yes, there is the standard red beats green / green beats blue / blue beats red action, but this game comes with a pair of twists. 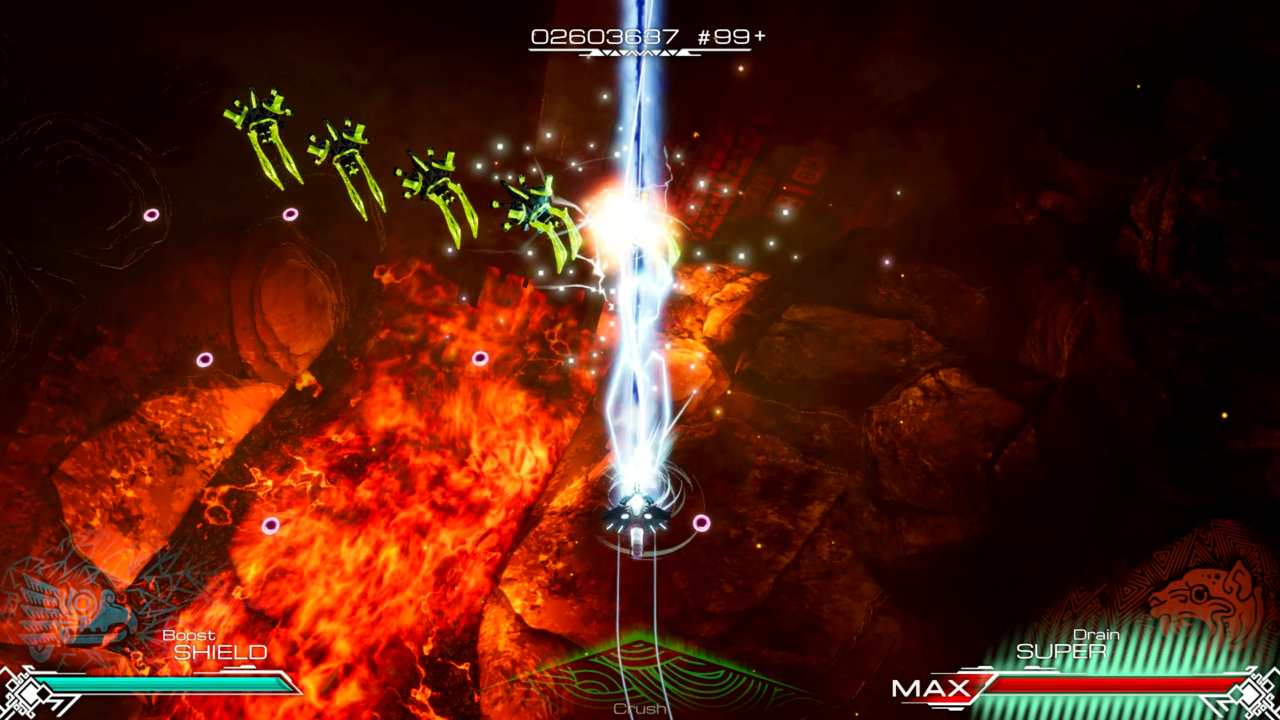 Do you remember the shields? Well, if you have taken hit, you can switch up your weapons to recharge your shields. If you destroy green enemies with the green weapon, you regain shield strength.  Now here’s the other twist; if you shoot enemies with the weapon color weakest against that enemy, like blue weapon against red enemy, you can recharge your special attack. The game calls the three triangle variations Boost (use the same color weapon as the enemy to build your shields), Drain (blue beats red beats green beats blue, which deals less damage but charges the special attack), and Crush (red beats blue beats green beats red, to deal double damage). The special attack is very handy because it unleashes a whole screen full of white projectiles. These represent a combination of all three of your weapons, and they will go after every enemy you can see. 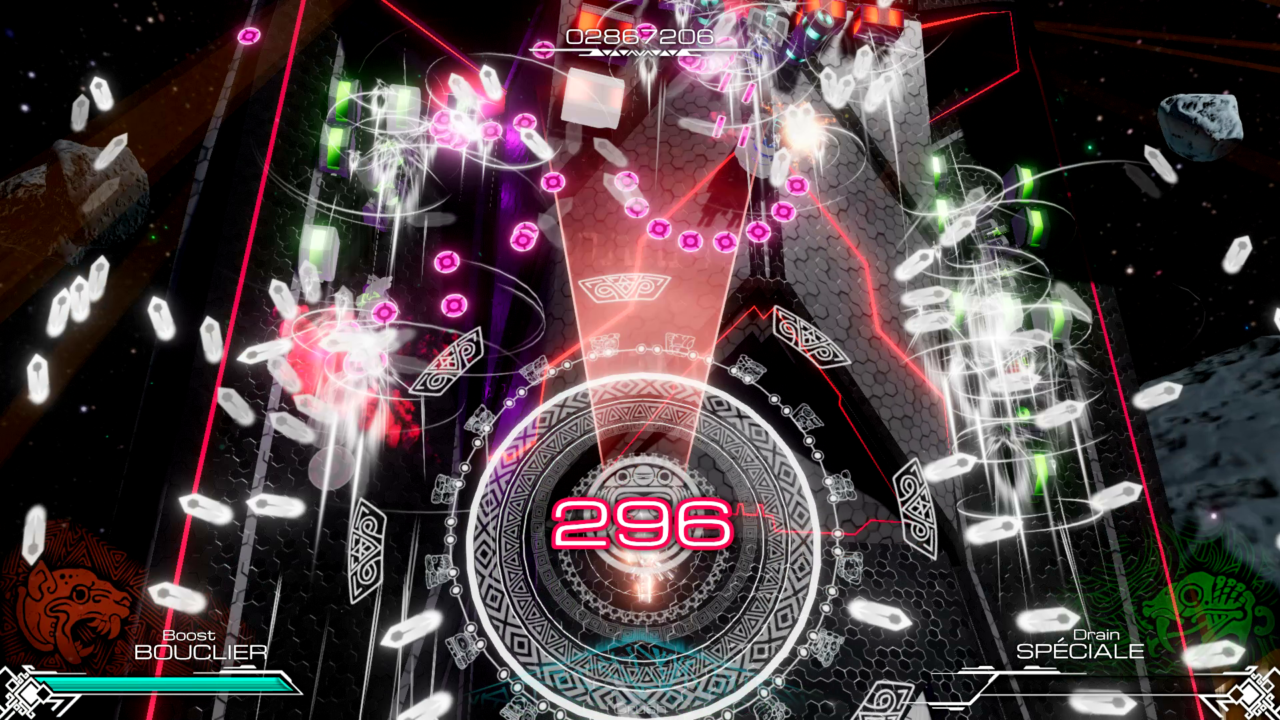 Speaking of seeing things, this game is good on the Switch console screen but it is much better on your TV.  With the larger format, it is easier to track and evade all that pesky enemy fire.

The whole triad of color triangles is a bit weird to wrap your head around at the start, but you get used to it fairly quickly. Just be careful to keep your thumb off the special attack unless you really mean it as it takes a while to recharge. I bumped the X button accidentally a couple of times and didn’t have my big gun ready for the boss at the end of the level (hello again, GAME OVER screen). If you have a similar concern with your playing style you can change the buttons layout in the game settings. Once you get the feel for the three color triangles you can start to familiarize yourself with the attack patterns and dodging enemy fire. 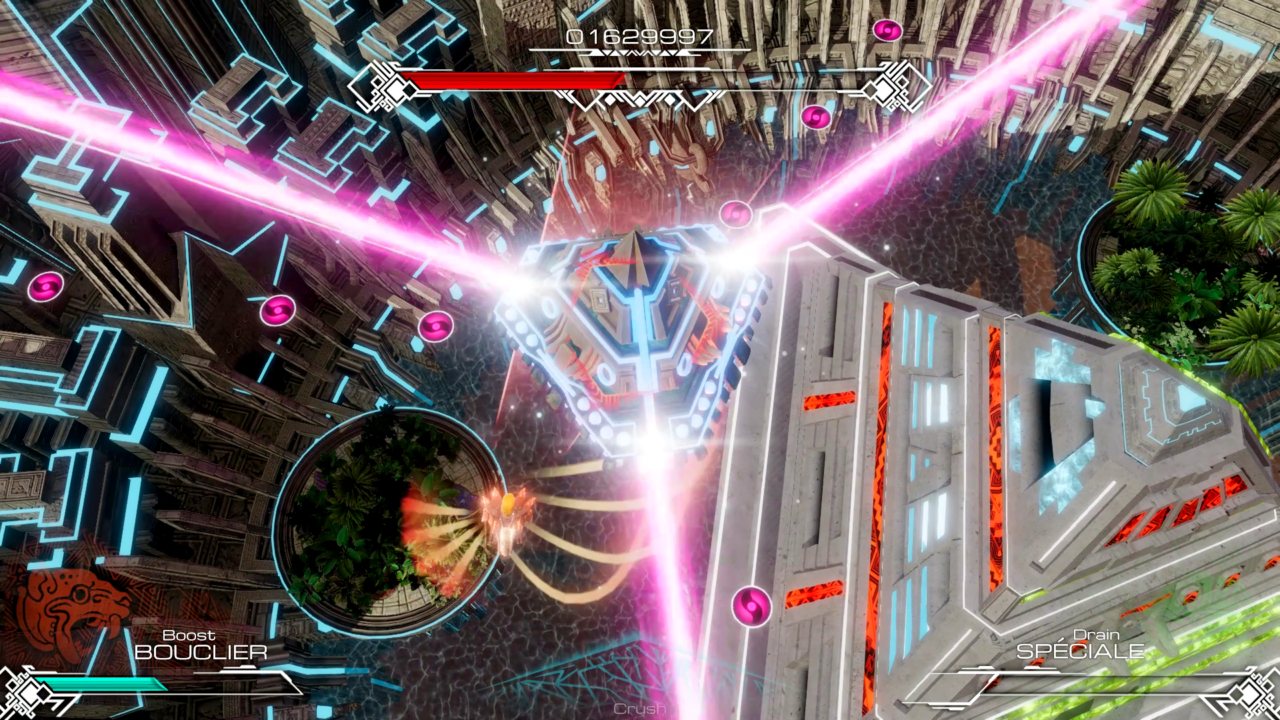 Pawarumi comes with a handy tutorial to help you get used to the color scheme before going at it for points. Speaking of points, the game provides an old school arcade leader board so you can see your name in lights along with a friendly message from the developers (you’ll see what I mean). If you are connected to the net and reeeeealy good at getting points, you can see your player name listed online at the Pawarumi site.

There is a plot to help draw the player into “the cause,” and while it isn’t strictly necessary, it is a positive addition to the experience. While flying the ship is a 2D experience, the overall visuals are 3D, and look great. The game comes with three difficulty levels: easy, normal, and hard. The easy level is challenge enough for beginners so mastering each difficulty level means plenty of play time. Gameplay is intuitive, and the missions are challenging enough that between the bosses and three difficulty levels it provides plenty of entertainment value for the money.

Pawarumi is a good old-fashioned “shoot everything that moves” game which engages the player right from the start; I had an adrenaline rush going the whole time I was playing. At $14.99, it’s a great addition to your Nintendo Switch catalog of games.