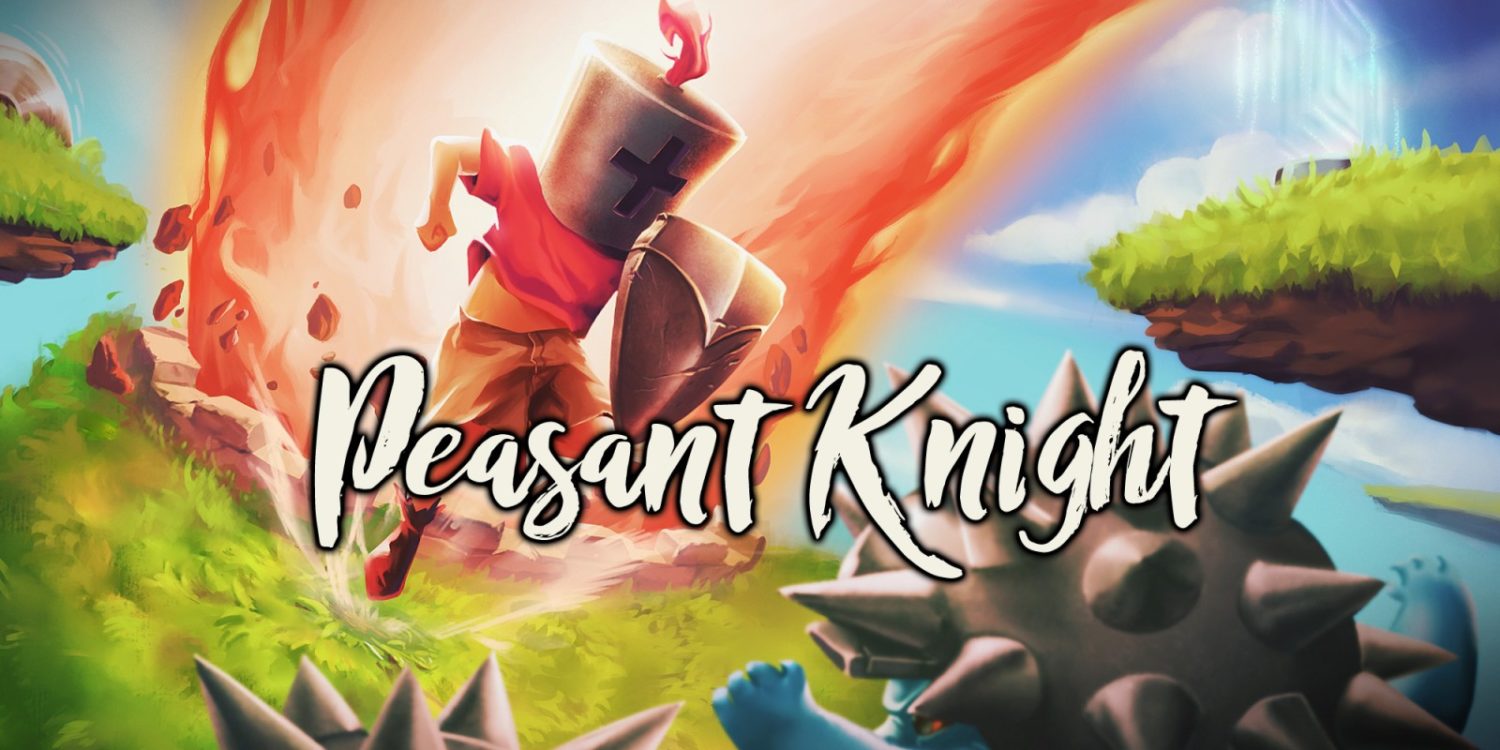 Peasant Knight from 4AM Games is pegged as a puzzle platformer. It’s actually more of a runner at heart, involving running, jumping, and avoiding obstacles. Your character runs by default, however you’re also given the ability to stop. This simple premise adds a lot to the gameplay, quickly turning it into quite an addictive affair. There’s no denying that Peasant Knight is a budget title at only $2.99, but don’t let its price fool you – there are 80 levels on offer here and they quickly ramp up from super easy to very challenging.

There are obstacles aplenty, with the likes of flames, meat grinders, and even people (or maybe they’re trolls?) wearing spiked helmets. In fact, there are 18 types of obstacles and traps, including boss fights. These are particularly creative, using portals to warp you back to the start so you run past the boss again. Your biggest threat, though, is time. 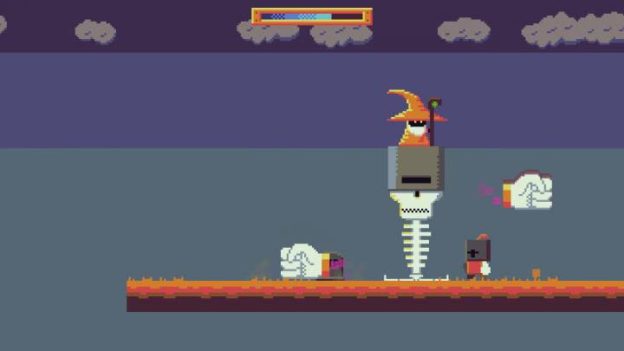 To make things more complicated, you have to complete stages quickly. There’s a time bar in the top of the screen that quickly fills up – we’re talking levels that can be as short as 10 seconds long. When the bar is full, your time is up, and you’re struck by lightning and forced to restart.

The game starts off ridiculously easy – but think of these as tutorials or warm-up stages. I managed to work my way through the first 27 levels in about 15 minutes since they’re so short and sweet. Soon after that, I began pulling my hair out. Yes, Peasant Knight can border on frustrating at times, particularly since you can’t skip any levels. Persistence is key and, thankfully, respawning is so quick that it feels like you’re continually playing, making it very, very hard to quit before finishing “just one more”. To further put it in context, the next 10 levels took me more than half an hour. And I wasn’t even halfway through the game yet. 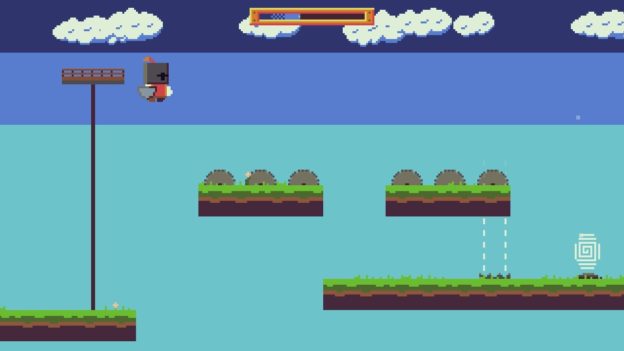 The developers use some very creative platforming designs. This is all the more commendable because of the short, succinct levels. For example, you might need to activate a lift before teleporting to another ledge just in time to catch that same lift as it meets you there. You’ll most likely miss it on your first playthrough. Sometimes you’ll need countless respawns to get the timing right. Practise – and precision – make perfect.

Like it’s premise and gameplay, Peasant Knight keeps things simple in the visual department. The game sports a somewhat retro style, with blocky 8-bit graphics. It works in its favour and adds to its straightforward premise of delivering a lighter gaming experience. There are other nice touches that add variety, such as rainfall or snow in a few levels. 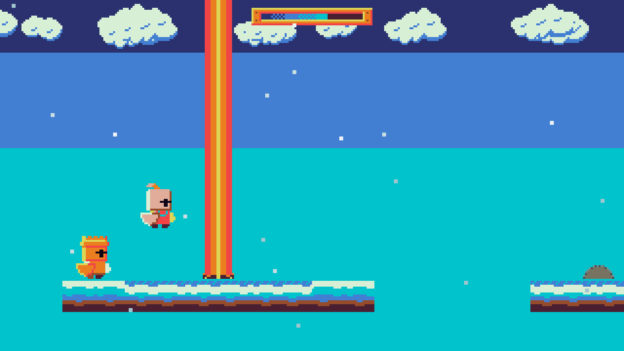 This visual style is complimented by a nice, bouncy soundtrack. The tunes change occasionally to combat repetition and it seamlessly blends into the background. The music adds to the experience, enhancing the overall speedy nature of the game.

Other pleasing features of the game include a user-friendly menu, which is concise and easy to navigate. It even uses the touch screen in handheld mode. I can’t stress how much I love it when developers take this minor detail into account – we’re all used to touching screens by now. 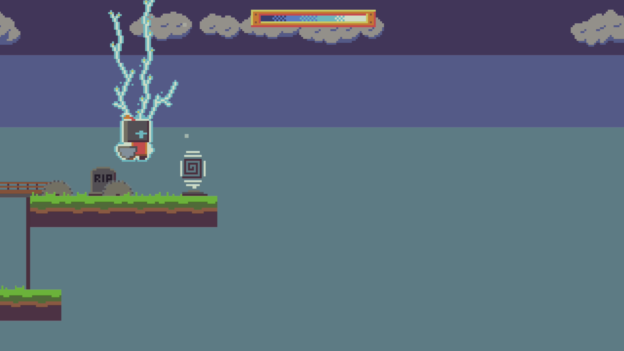 I also enjoyed the brief comic book-style intro that tells the tale of an evil wizard. You can flip forward and backward through the five or six panes to read the story at your leisure. It’s the little things that help this game stand out from the crowd.

It all sounds very promising, and it really is. There’s even a simple co-op mode so you can tackle levels together, or compete with each other to finish first. Perhaps my main gripe is a lack of functionality around the basic concept of the game, such as leaderboards or statistics. I’d like to know just how many times I died, for example – it would have to be in high 100s. The inability to skip levels, and the frustration of some of the more challenging ones, may put some players off too.

Overall, Peasant Knight is a fun platformer runner with a tough edge. It sports a simple design that compliments its shorter levels, but don’t be fooled – this is a challenging title that requires quick reflexes. It’s also a bargain at $2.99. So, if running, jumping, and dying repeatedly is your thing, definitely give this one a go.

Peasant Knight is a fun platformer runner with a tough edge. The simple design compliments its shorter levels, but don’t be fooled – this challenging title requires quick reflexes. If running, jumping, and dying repeatedly is your thing, definitely give this one a go.