Pecaminosa is an action-RPG, sporting a pixelated art style and a mid-20th-century noir setting. With a classic setting for a crime game, Pecaminosa follows a detective who’s been kicked off the force for taking it too far. You play as John Souza, the aforementioned detective, who has been enlisted by the very crime boss he got kicked off the force for killing, in order to help him make his way to the promised land. Admittedly, there is a lot going on here, but it isn’t confusing. The paranormal thriller coupled with a noir setting actually goes together quite well, especially when it’s in the titular town: Pecaminosa. 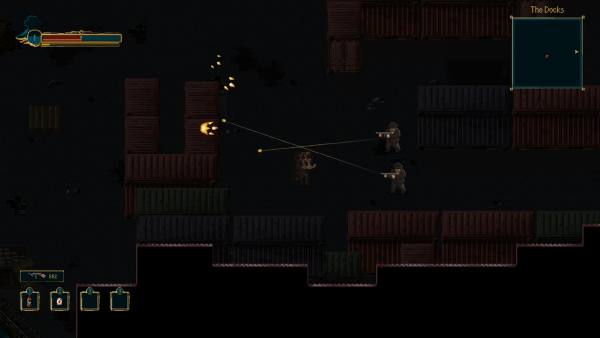 The story itself is interesting enough but nothing to write home about. It’s never boring, and the eclectic cast of characters helps keep things interesting as you progress. It maintains your investment the whole time, despite some of the stranger turns it may take. It’s executed well and the story is supported by the environments as well as some strong writing.

The best part of Pecaminosa is certainly the art style; it compliments the game and only enhances the atmosphere that it’s trying to paint. Combining this with the accompanying music, Pecaminosa is a very aesthetically pleasing experience. Unfortunately the gameplay is not as strong as the environments. The twin-stick shooter style grows repetitive the more you play. As fun as it is to explore the environments, the shooting is tiresome, there is little variation from moment to moment, and despite being able to upgrade your stats through gear, Pecaminosa constantly feels clumsy and clunky when moving around. The way it feels also inhibits the exploration. All too often, it felt like a chore when I had to go somewhere far away, or if I had to retrace some of my steps. 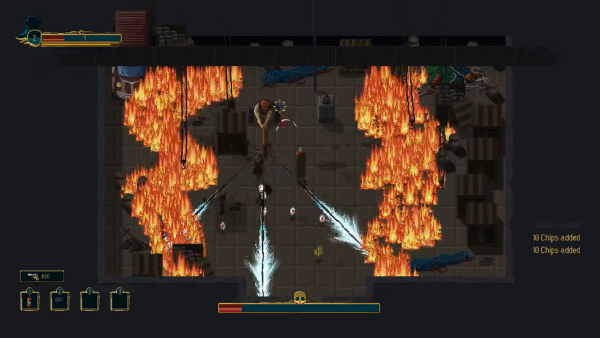 The RPG elements of the game are implemented well, feeling very organic and natural. The city is open, there are NPCs to chat with who offer the usual tasks and quests we’ve come to expect from these kinds of games. Like your traditional RPGs, you can also upgrade your character and equip new gear that will change your stats. It has all the things you can expect from an RPG, however with this art style and setting it feels fresh and unique. Pecaminosa is also not too long, making it easily consumable. Most importantly, choice plays a part. It isn’t quite as extensive as can be seen in other RPGs, partly due to the length, but sometimes a shorter experience can be just as fulfilling.

Pecaminosa is an intriguing tale that follows our detective on an engaging journey. The RPG mechanics work well alongside the story and the world. Sadly, the mundane gameplay does let down the rest of the package. There is nothing groundbreaking going on elsewhere in the game to really justify the admission. Most importantly, a game should be enjoyable. Pecaminosa is stunning to look at with a charming soundtrack, but sadly it just isn’t very fun.

Pecaminosa does have a lot to offer; a rich world and an interesting cast of characters. Sadly the stale gameplay can hold it back at times.