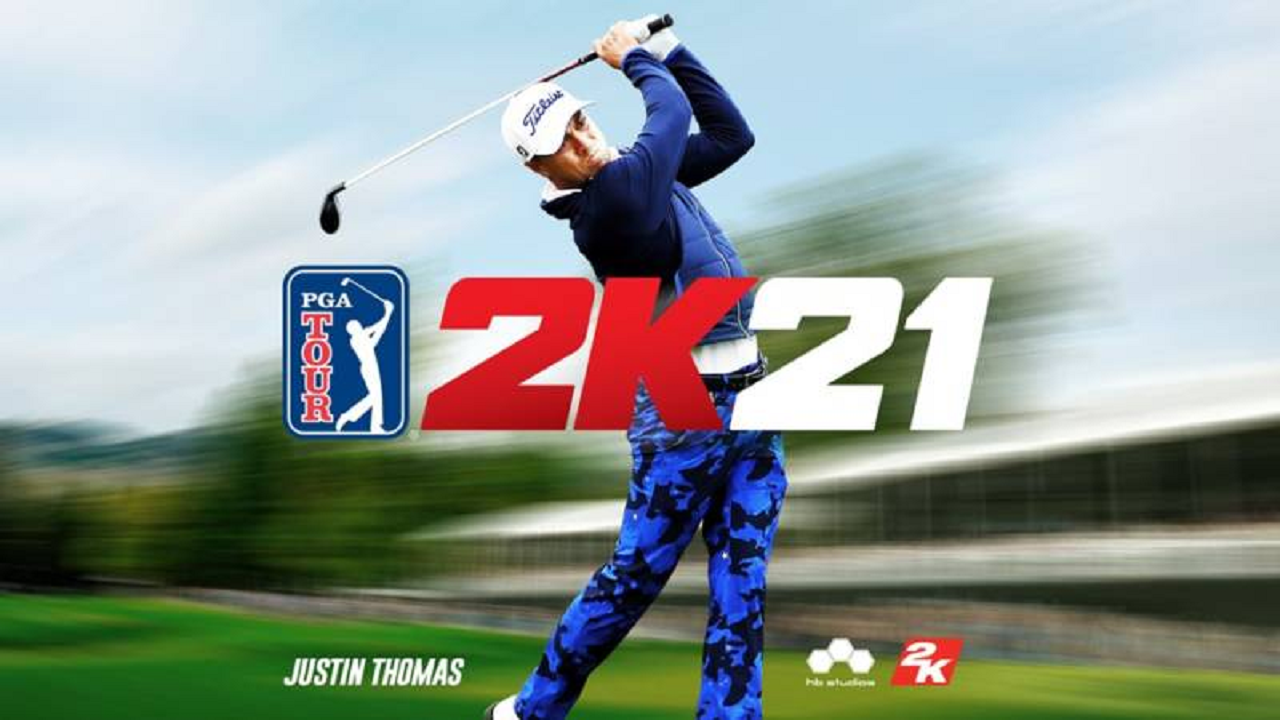 While the Nintendo Switch is home to some great arcade and non-traditional golf games, PGA Tour 2K21 is the rare simulation on the hybrid console. I’ve been a series fan since PGA Tour 96 (on 3DO), even if my golf experiences on the last few Nintendo systems have been via Wii Sports or with Mario teeing off. Thankfully, this latest PGA entry takes me back while still moving forward.

True, it’s missing some of the features I remember, like practicing any hole and gimmes. The course fly-bys too, although those may be a relic of mid-’90s TV-style presentations. But it also has some of my favorite courses like TPC River Highlands in Connecticut, and TPC Summerlin in Las Vegas. The former has beautiful views overlooking the CT River and a famously tough final hole with a narrow fairway flanked by bunkers. The latter, a stadium course with great mountain views, has the desert looking better than ever.

All told, you can choose from 15 available (and quite diverse) courses. The 11 Pros are slightly lower than I would have expected, but it’s the course count that will keep you busy. You can even tweak settings for the time of day and weather in local matches, though competing against pros is TOUR play only. 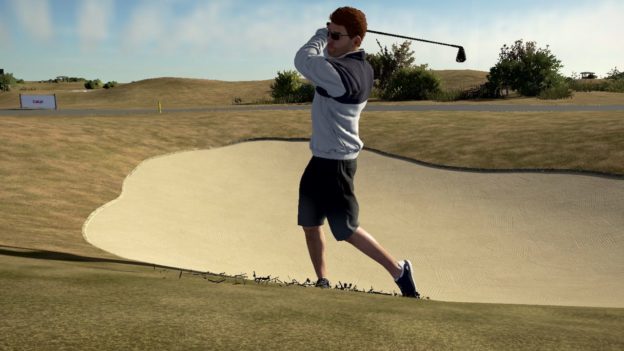 Want an even higher course count? You can design your own, which is both an overwhelming and exciting thought. I’ve only dabbled in this, so I can’t comment much beyond my intrigue. But I appreciate how the options are separated by layout, terrain, and theme to start. I may never fully dive into land sculpting, but it’s there should I ever choose to give the game extra legs. PGA 2K21 is for those who’ve always wanted to consult on course transformations.

I’m getting ahead of myself anyway because there are features that will attract your attention early. MYPLAYER might be a grammatically challenged mode, but its customization options are deep. Some may be for naught though, as a pair of shades hide my crow’s feet. Nonetheless, I appreciate the feature as I’ve taken digital Trev into the Career Mode.

Advancing past pros may seem intimidating to less seasoned players, but helpful tutorials teach how to start and improve play. I admit the user interface could be faster and friendlier – it’s a bit overly complicated trying to fine-tune with precision – but practice makes perfect. The opening tutorial will get you ready to start your career, as you aim to become the FedExCup Champion. As you grow as a golfer throughout the season, you’ll attract rivals and contract sponsors.

In between, why not check out the online community? None of my friends own this game, so I was unable to set up a private match. Which is a shame, as playing with strangers essentially means going against existing leaderboard scores as I couldn’t find anyone online for head to head. It’s not a quick process, and I haven’t been able to find a way of learning the difficulty setting before joining. So I doubt I’ll be going online much. All the same, I’m creating a casual online society, Purely Trev’s Club, with no membership fee, so Pure Nintendo amateur golfers, look me up. 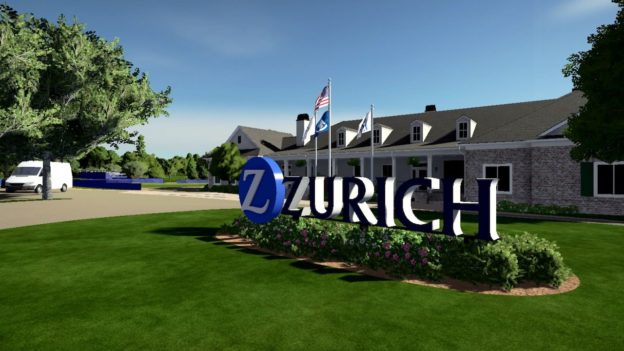 As you gain experience, you’ll appreciate how you can adjust the skill level. There’s a fair amount of choice in how you can do this. For instance, as someone used to the classic 3-click swing meter, some of these modern alterations – flicking the Joy-Con sticks – aren’t superior. But, even tweaking them to more forgiving settings, I’ve still ensured a good challenge by upping CPU difficulty, boosting wind, disabling Pro Vision settings, etc. These nuances help make learning each course oh so satisfying, while also raising XP for bragging rights. They also keep the continual temptation of the risk-reward element (trying to reach a Par 5 green in two, for instance) tempered by the desire for pinpoint accuracy.

Now it’s time to talk about the presentation, which is a mixed bag. The audio side is mostly well done, with ambient effects, occasional music, and commentary that grows on you. Only the voice of John McCarthy suffers, often being too soft to hear against the play-by-play and analyst commentators. He does fare better during local matches.

Visually, PGA Tour 2K21 can look quite lovely at times. But there are inconsistencies with lighting, and shadows move like time-lapse photography. Cutscenes have some stutter. Sometimes golfers will appear completely black like Shadow Link. Such variances remind me I’m playing on Switch, usually in handheld mode.

The biggest audio-visual blunder in my mind is the lack of crowds. You’ll see the clubhouse, gallery seats, cars, etc. But it’s all empty; there isn’t even any crowd audio to add insult to injury. I can grant a pass to the lack of visual crowds as a Switch sacrifice, but the lack of audio too? Unacceptable when I was spoiled by it 25 years ago. I must rightly call out such a choice as a triple bogey move. 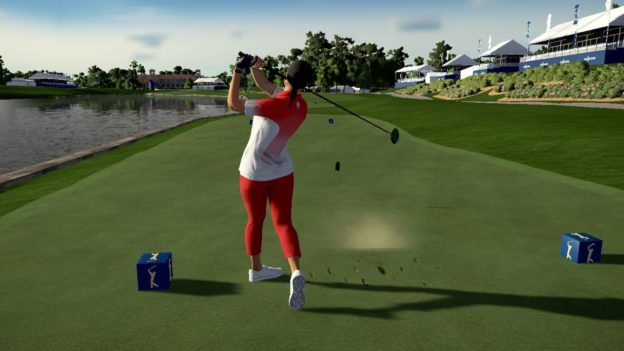 Most other complaints are less significant. The number of legalese pages gives a poor first impression, but you won’t see them after the first day. While an actual game can be slow to start, once you’re ready to tee off, the game moves at a good pace. Seeing Ian Poulter more than Justin Thomas (the cover star) is odd, but more of a comical curiosity than anything. Not being able to record footage is a bummer, but you can save replays. Occasionally, replays freeze on a character’s face, so the shot isn’t viewable, but repeat viewings let you decide the angles. Spending up to $49.99 to buy in-game currency is eye-rolling, but easily ignored. Not having a physical version on day one is a mistake, but it’s arriving (better late than never) in September.

One complaint that’s not the least bit minor is the game closing “because an error occurred.” If it only happened once, I could chalk it up to the odd instance, but it’s not a solo situation by any means. So be warned, the bugs in PGA Tour 2K21 aren’t limited to aesthetics alone.

All the same, PGA Tour 2K21 presents many rewarding moments: having a rough start, only to rally on the backside for victory; learning I won a count-back to break my first-place tie; changing from Stoke to Match play so that a crummy couple holes that (under other conditions) would end my game let me remain competitive. And many more that space won’t allow me to mention.

As someone unlikely to play most of these courses in real-life, I relish the chance to visit them in video-game form. From driving off the tee, reading the green, and everything in between, this title offers a lot in spite of itself. If you’re someone who enjoys golf sims, please don’t let some careless glitches prevent you from checking out PGA Tour 2K21 on the Nintendo Switch. With practice, even a real-life duffer like myself can rack up his share of eagles

As someone unlikely to play most of these courses in real-life, I relish the chance to visit them in video-game form. From driving off the tee, reading the green, and everything in between, this title offers a lot in spite of itself. If you’re someone who enjoys golf sims, please don’t let some careless glitches prevent you from checking out PGA Tour 2K21 on the Nintendo Switch. With practice, even a real-life duffer like myself can rack up his share of eagles.