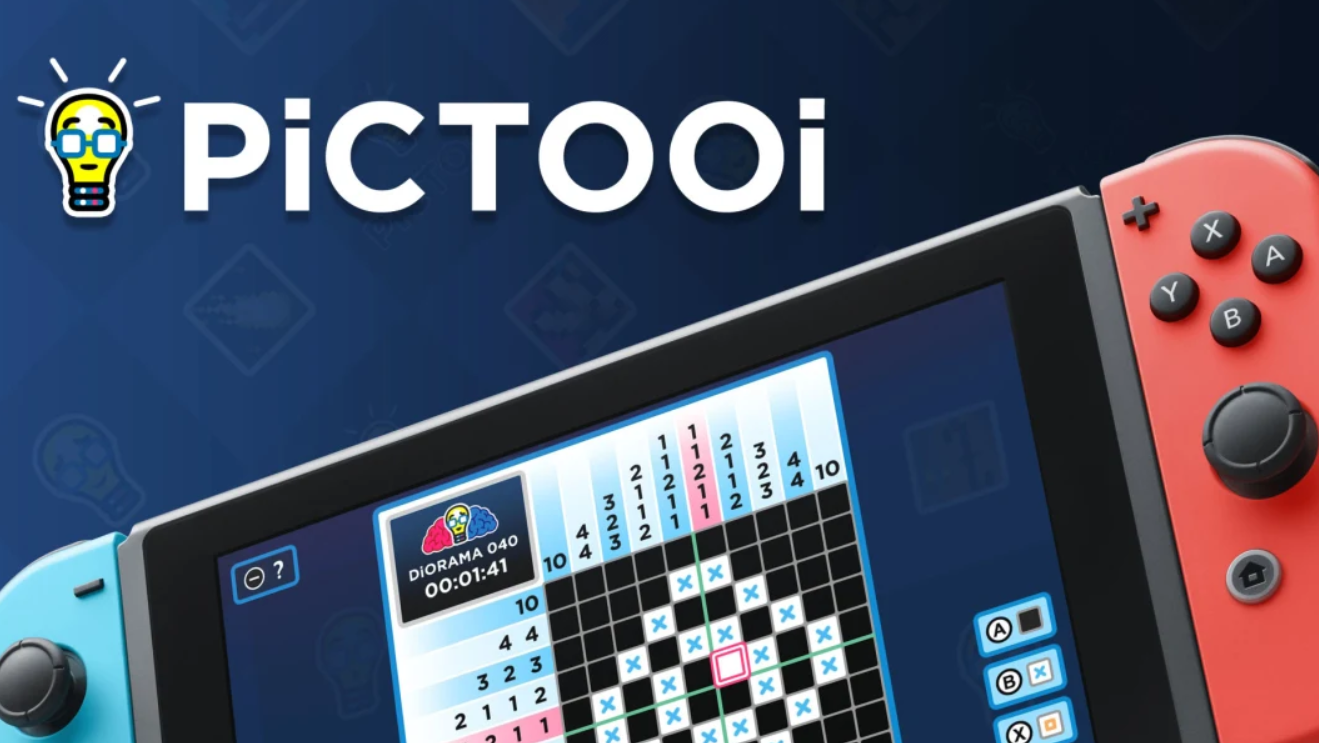 Pictooi is a puzzle game for the Nintendo Switch that meshes the classic picross style with elements of Brain Training. It’s developed by indie developer Atooi, whose goal is to use retro roots to bring a modern mojo to gaming. It doesn’t get much more retro than picross, and the team has done a great job creating a fresh version for players to enjoy.

For those uninitiated, picross puzzles present a blank square divided into a grid. Numbers align the top and left sides, indicating which squares in the grid should be colored and which should be left blank. It’s your job to decipher the pattern using these number clues and logic.

If you’re a picross fan you’ll be happy to find a whopping 300 puzzles on offer here. The game consists of two modes, both featuring picross puzzles. The Classic mode boasts 180 puzzles divided into 10 categories, like nature, animals, food, and shopping. These are further categorised into three sizes – or difficulties – with grids of 5×5, 10×10 and 15×15 squares. 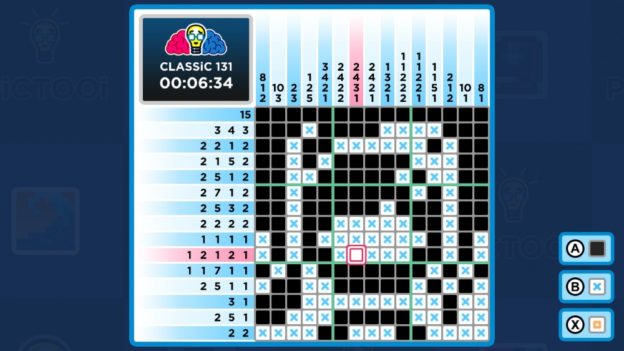 The second mode is Diorama, with another 120 puzzles spread over 8 categories. These are essentially more picross puzzles, however, each unlocks an image that forms part of a bigger picture. Completing a category reveals a neat background related to Atooi’s gaming past. These diorama puzzles are also more challenging, going all the way up to 20×20 squares.

There are a few elements that help this title stand out. I love that a tidbit of information is revealed about each object upon completing a puzzle. For example, it’s revealed that the sun is one million times bigger than the Earth, and the piano was invented in 1709 – who knew? These facts are presented as an easy-to-digest paragraph that pops up as a dialogue box after puzzle completion. It adds to the fun as well as the educational side of the game.

Which brings me to the other element of Pictooi that I enjoyed, which is the connection with training your brain. A simple calendar interface on the title screen monitors your daily progress, including time spent playing and number of puzzles completed each day. The game encourages you to play daily, exercising your brain like a muscle. 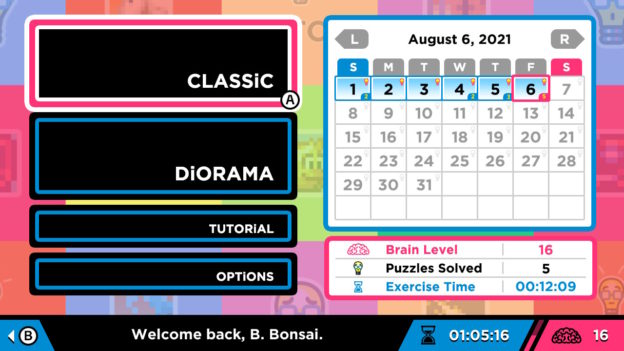 As part of this experience, your “brain” also levels up, another neat touch. It’s a simple number reflective of how much time you’ve spent playing; there’s no progress bar to indicate how close you are to the next level, an addition that might help to further incentivise players. I’m also unsure what the max level is. It’s still a great way to encourage players to practise more often.

The most important aspect is obviously the puzzles themselves, and these are well-executed with easy controls: the A button colors in a square and the B button marks it with a cross. You can also use the X button to place an orange marker on the grid, although the tutorial doesn’t explain what this means; maybe it’s when you’re not sure of an answer? I didn’t use this feature since it didn’t add any value for me.

There are a few missing extra gameplay features that I do think would add to the experience. For instance, I was surprised by the lack of touchscreen controls for handheld mode. Having played a lot of picross on my 3DS in the past, the touch screen feels natural to me. Another missing feature is an undo button. This would be useful if you accidentally activate a square in haste and you’re not sure which one it was in, especially in the bigger puzzles. There’s also no save feature to enable players to come back and finish a specific puzzle later, again especially useful for the bigger puzzles, which take longer to complete. 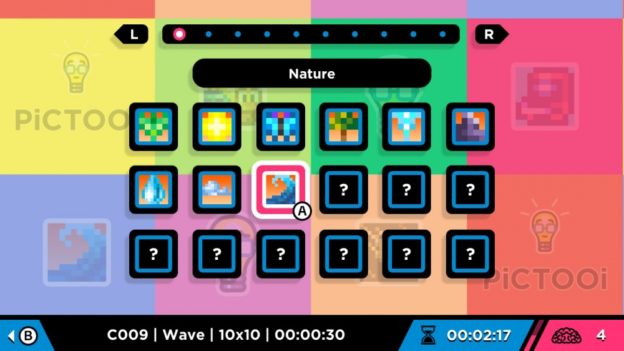 My only other niggle is a slightly longer load time than I’d like to experience. There are 15 seconds of white screen upon completing a puzzle before being returned to the list (and the pop-up fact). It’s not exactly a showstopper, but it feels a tad too long.

Aesthetically, Pictooi is nicely presented with a simple style that looks polished. It’s colorful in a pastel sort of way, with visuals that are very soothing, coupled with equally chilled music in the background. The title screen is bold without being distracting and the puzzles are well designed and clearly presented in handheld mode, even when the puzzles are quite large.

Overall, Pictooi is a fun picross game with a simple and well-presented style. I’d prefer a few more features, but the puzzles themselves are enjoyable and the daily brain training element is a nice feature for anyone who likes to flex that particular muscle. It’s recommended to picross and logic-puzzle fans.

Pictooi is a fun picross game with a simple and well-presented style. It’s lacking a few features, but the puzzles are enjoyable and the daily brain training element is a nice feature for anyone who likes to flex that particular muscle.