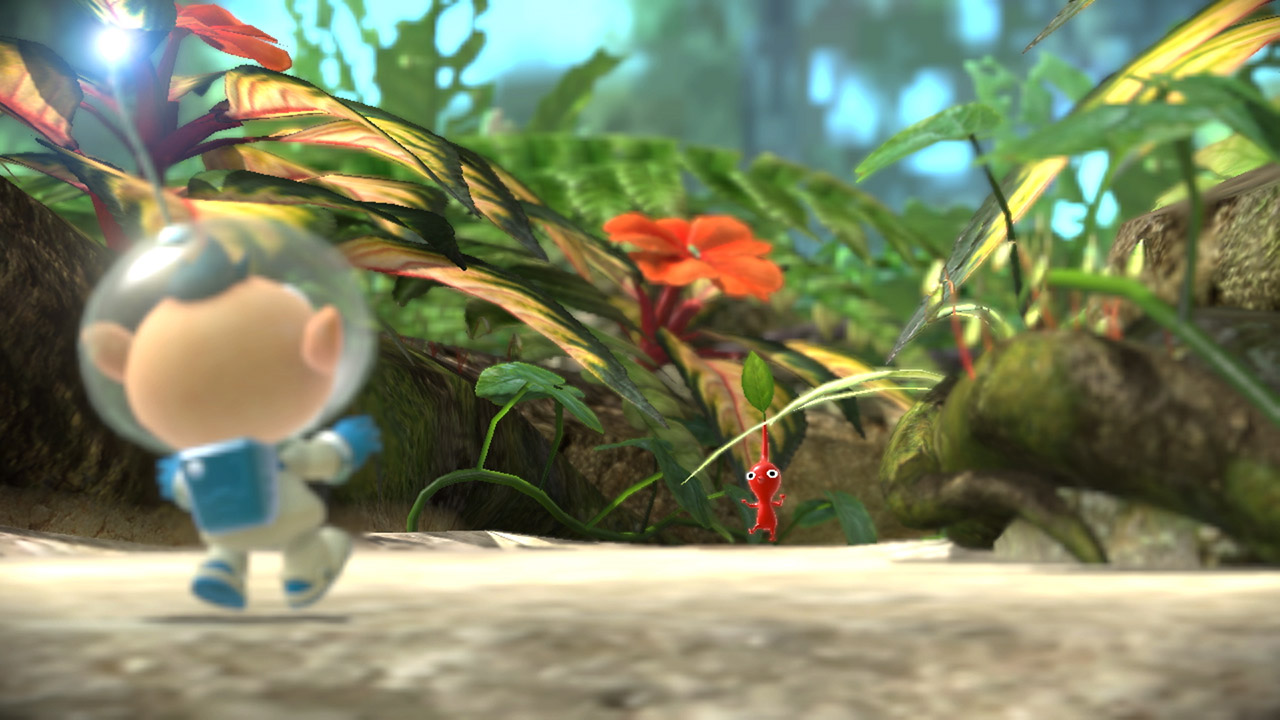 Pikmin 3 Deluxe is a gorgeous, unique, and nearly flawless game that all Nintendo fans should play. The problem is, of course, that many already played it when it was first released in 2013. Like so many Wii U games before it, Nintendo has decided to give gamers another chance to try this one out, releasing it for the much more popular Switch.

I’m fine with this. Although the Wii U was (and still is, really) a wonderful system, not everyone was willing to give it a shot. I consider it a good thing that Nintendo has been making these old games available on this gen’s system. It’s great for those who missed them, and those of us who didn’t have the option to double dip.

I chose to do so. Although I have the Wii U version ready to go right here in my office, the chance to play it with the few additions Nintendo has provided in the Switch version was just too appealing. Of course, it helps that the source material was a nearly flawless game to begin with. 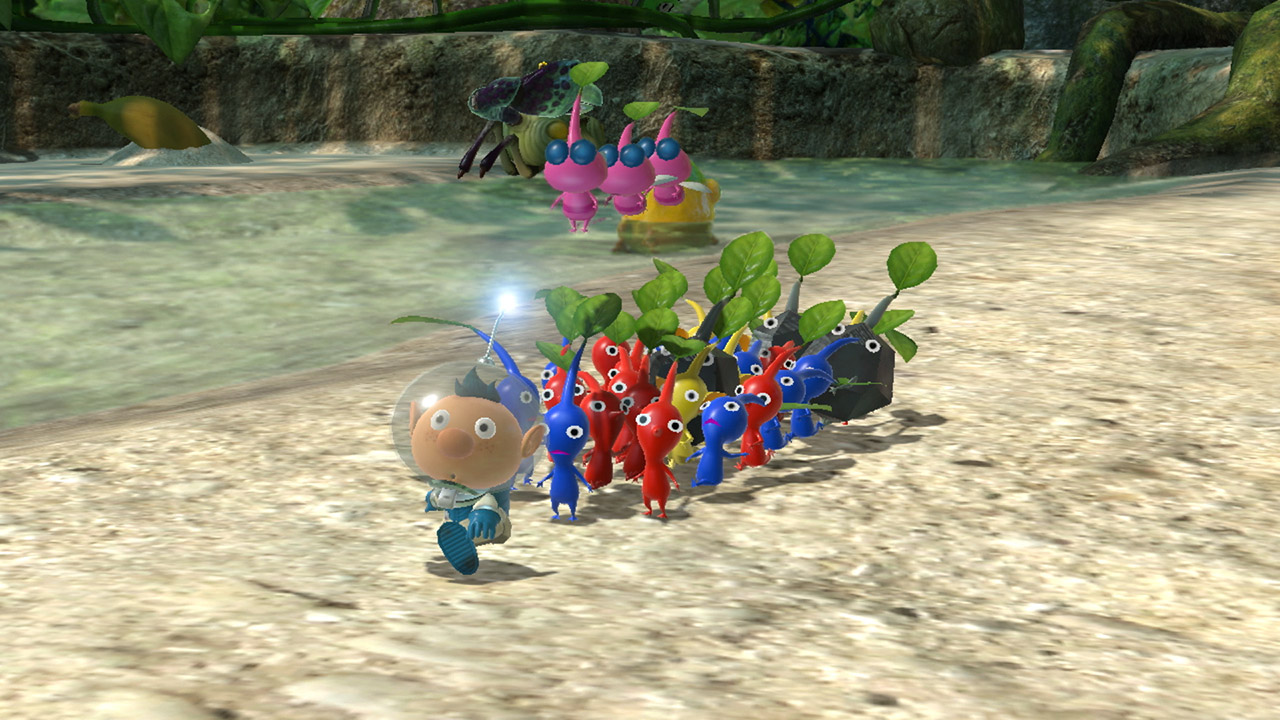 As you surely know by now, Pikmin 3 Deluxe centers around three interstellar travelers—Alph, Brittany, and Captain Charlie—who find themselves crashed on an alien planet. They’re tiny in this world; smaller than most of the foliage. And although the world is beautiful, it’s also very dangerous. There are numerous (and wonderfully named) beasts that seek to do them in as they attempt to gather bits of technology to repair their ship.

Thankfully, not all of the wildlife is malicious. Even smaller beings called pikmin take to them, and our heroes are able to use these creatures to assist in their adventure. 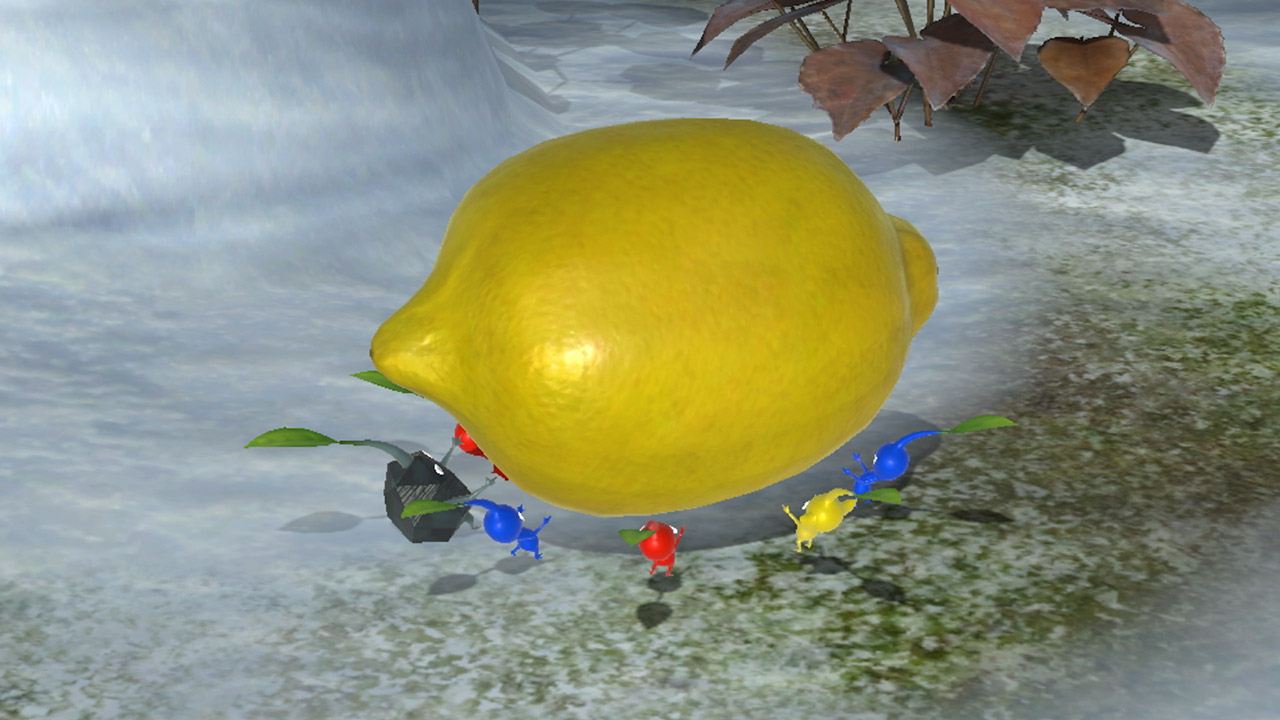 The various pikmin have different skills (red is impervious to fire, blue can swim, rock can break through crystal and have massive attacks, etc.), and they’re generally used by tossing them at objects. Doing so causes them to complete tasks such as carrying objects back to the ship, building bridges, and fighting enemies.

Gameplay, then, centers around using the pikmin to clear out enemies, access new areas, and gather the materials you need to repair your ship and stock up on food (in this case, specifically juice). You can only use pikmin during the day, however, giving you a set window in which to make progress. At the end of the day, any pikmin that haven’t been returned to their “onion” (a small spaceship that houses them) or are under your control will be devoured.

And actually, a lot of pikmin will be devoured during the game, lost to the many enemies (especially the bosses) and environmental hazards. However, there are many ways to grow more pikmin to keep your stock high. You can only have 100 in the field at a time, including those planted in the ground (the longer you keep them planted, the quicker and more powerful they become). Deciding how to use them and where to take them provides the bulk of the strategy, as you need to make sure you’re equipped to solve the puzzles, reach the new areas, and battle the enemies in order to complete your tasks before you run out of juice. 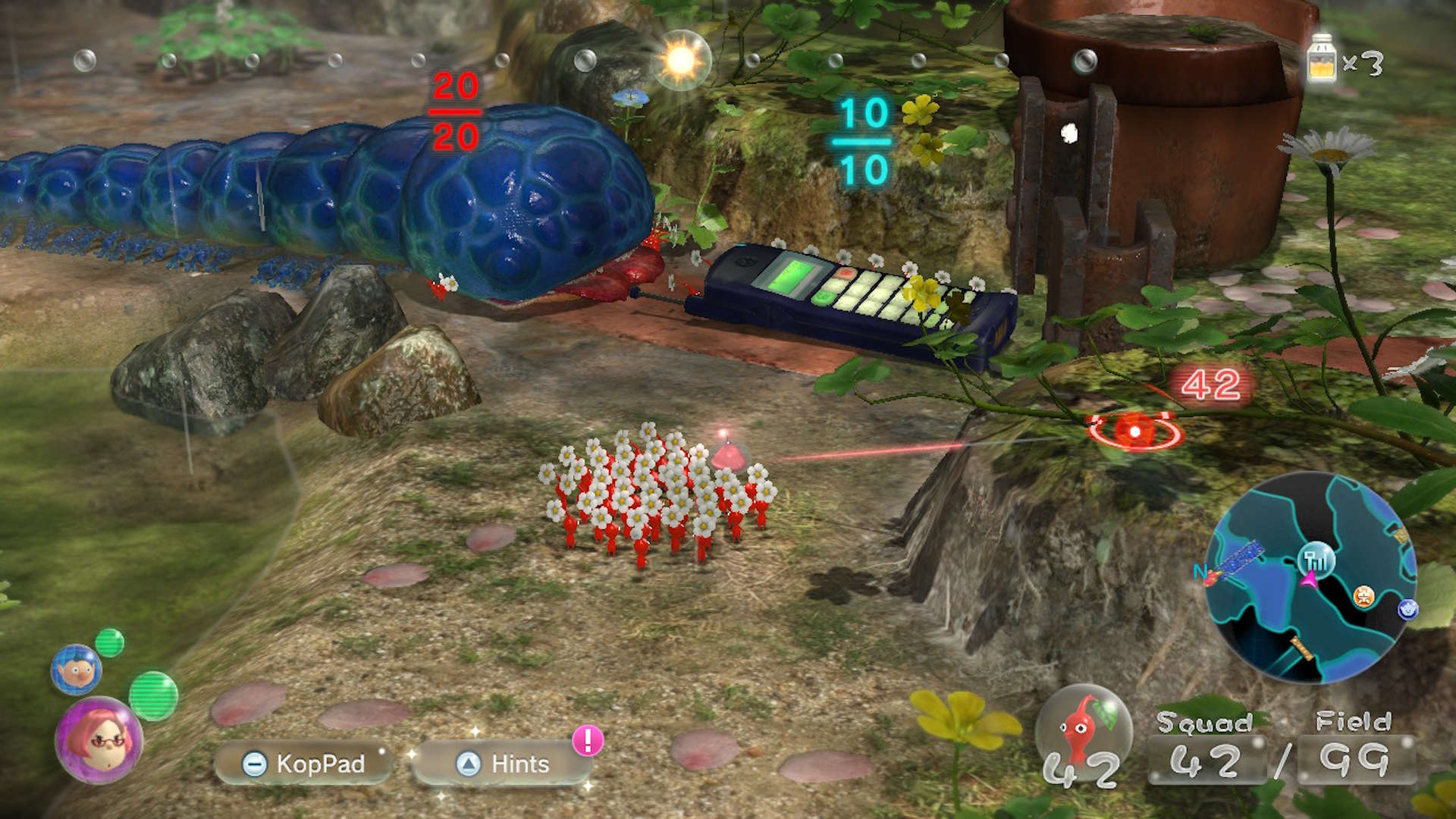 But you knew all of this, right? This is the third Pikmin game in the series, and the gameplay has never changed that much. Did Nintendo do enough with the “Deluxe” version to curb the disappointment of not giving us Pikmin 4? That depends upon what you’re looking for.

Visually, the game doesn’t look that much better than it did on the Wii U. This isn’t a problem, per say, as it’s still a gorgeously colorful and detailed world to explore. The DLC from the Wii U version is all included here, but this focuses mostly on bonus missions and battle packs. They extend the life of the game, but are easily ignored. Also, I miss having the dual screen map we had on the Wii U GamePad, but I miss that in every Switch game that utilizes a map.

The two main incentives, then, are the new missions featuring Olimar and Louie from the previous Pikmin games, along with the ability to play the story campaign in co-op mode. The Olimar/Louie prologue and epilogue missions were a bit disappointing, I think, in that they played more like DLC than a thoughtful addition to the story. These bonus missions are time-based. You’ve got a limited window to collect fruit, and if you don’t get enough you can’t advance. Reaching bronze level allows you to open the next mission, and having to replay them makes these story elements feel disjointed.

It helps that they’re not too hard to accomplish if you play in co-op mode. That ability, ultimately, is the biggest incentive for double-dipping. Yes, I could’ve just played this on the Wii U at any time. But as we pointed out in our original Pikmin 3 review, the only real fault of that version was the lack of co-op in story mode. It’s included here, and the ability to work together with a friend is wonderful. 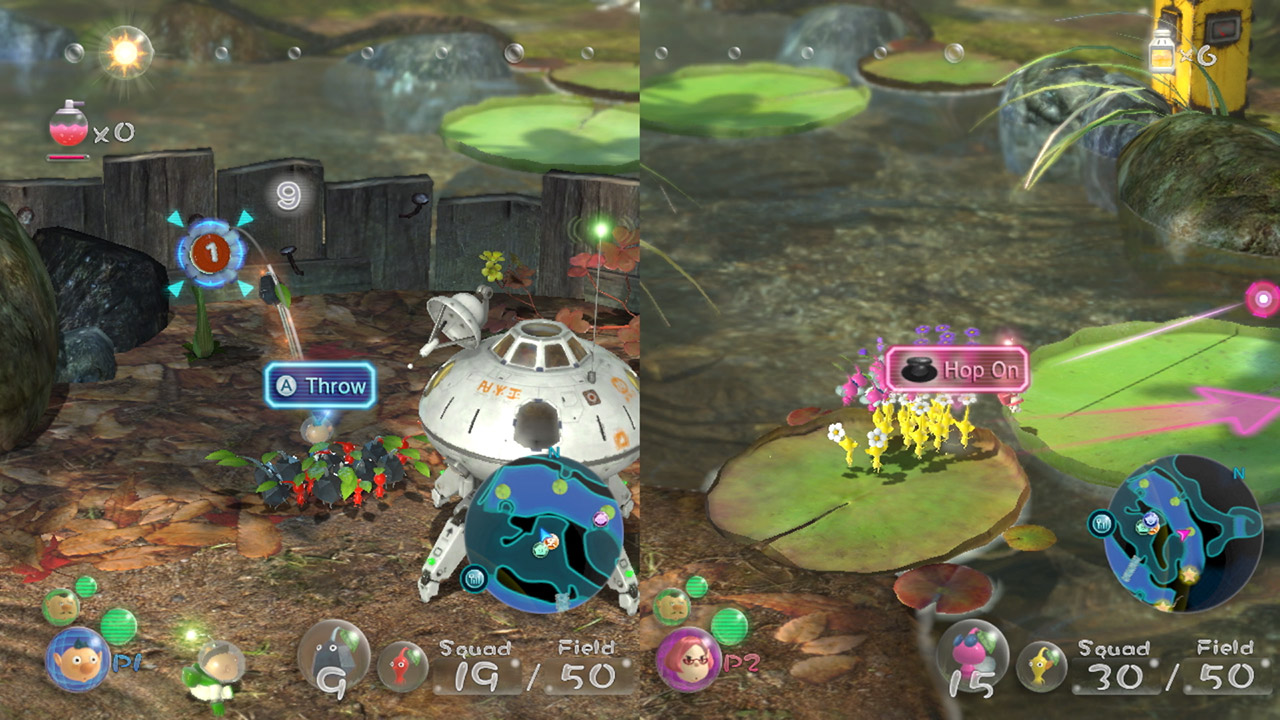 Many of the puzzles center around utilizing two or three of the game’s main characters in tandem, and this is easier to manage with two people. Plus, the boss battles offer frantic fun this way. It’s a bit easier when one player can distract the beast while another exploits its weakness, but it gets pretty chaotic when you’re calling your pikmin and end up grabbing the other player’s, too.

This makes my recommendation somewhat predictable. If you didn’t play Pikmin 3 on the Wii U, it’s a must-play here. It’s as cute, clever and challenging as any game available for the Switch. If you have already played it, a second (or third) run-through is likely not worth the $60.00 price tag unless you want to play it with a partner. That’s what I’m doing. As a result, I’m having more fun with Pikmin 3 Deluxe than I did the first time.

Talk of double-dipping aside, Pikmin 3: Deluxe is one of the best games available for the Nintendo Switch. Local co-op play in story mode, however, is the only addition that helps it stand out from the original Wii U version. If you’re not playing with a partner, view this only as an expensive stopgap as we await the ever-elusive Pikmin 4.