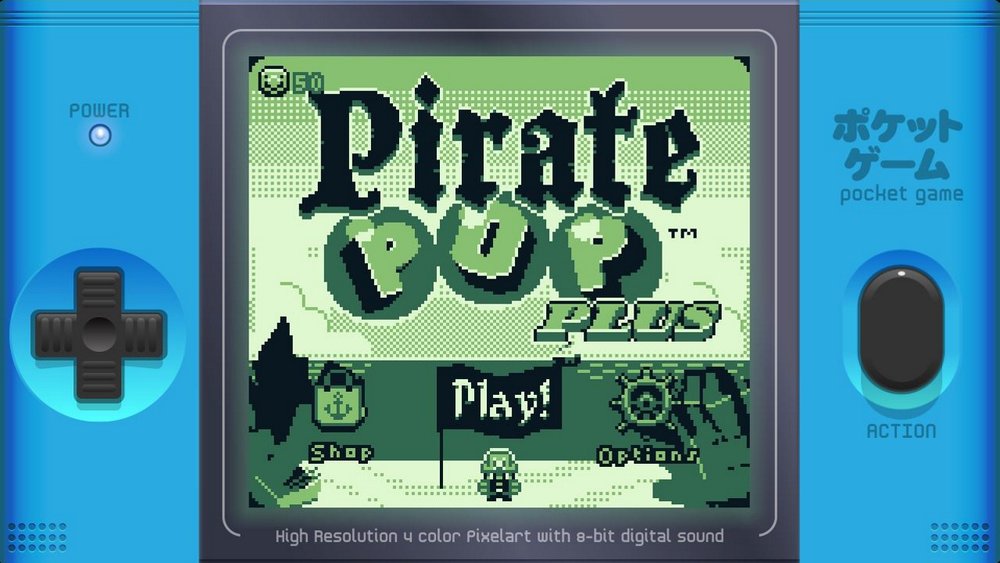 I’ll admit up front that this game really took me by surprise. I am a fan of bubble-popping games (for some reason) but I haven’t played one in probably 10 years and really hadn’t thought much of them. Then along came Pirate Pop Plus.

The premise is simple – you play the role of Pete Jr., who discovers that the dastardly Bubble Pirate has trapped townsfolk in bubbles. So off you go to burst his bubbles and rescue everyone! You’re essentially trapped within a square playing area, with Bubble Pirate dropping giant bubbles on you. The bubbles bounce endlessly around the screen, but touching them takes away one of your hearts, so you’ll have to pop them with your anchor. Popping a giant bubble creates two or three smaller bubbles; popping one of those makes several even smaller ones; popping those makes them finally disappear. Three pops, and they’re out!

The real goal is to survive long enough in your square arena to earn the highest points and collect enough coins to unlock various prizes – and this is where the game becomes addictive. You’ll want to keep playing in order to beat your high score and to unlock everything. There are also achievements to beat, which make replayability a sure thing. Playing a round only takes a few minutes, so it’s fast paced and gets frantic the longer you survive – particularly with the gravity element thrown in.

Pirate Pop Plus adds its own unique twist to the genre by randomly rotating the playing area. Sometimes it’s Bubble Pirate’s doing, but other times you can control it via an arrow power-up that appears, which allows you to change direction by collecting it at the right time. The brilliant part of the rotation aspect is that, as you fall to your new ground, you can bounce on bubbles to pop them, helping to clear the screen and generate a lot of valuable points if done consecutively. 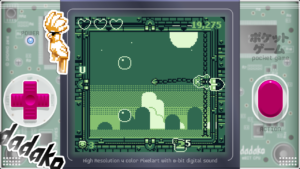 The whole dynamic is made even more interesting by other power-ups that occasionally comes your way, from solid anchor lines to some sort of rapid-fire laser machine gun, which is by far the coolest weapon. You’re also encouraged to pop multiple bubbles in a row to rack up a combo and earn a higher score, making the game much more strategic than at first glance. 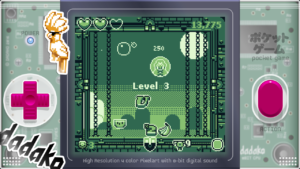 The simple graphics are on purpose, of course, and match the retro-inspired gameplay perfectly. The style is meant to give the aesthetic of an original Game Boy game – and it totally does. It looks really good too, and I love that you can change the color of almost everything after unlocking with coins. The music is in step with the same retro style – classic chiptune music that feels right at home with the visuals, without being annoying or distracting. 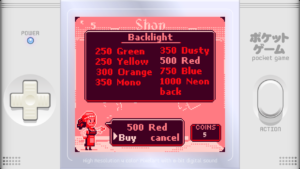 Use can also use coins to change the backlight color

I only have a couple of concerns with the game. Firstly, it’s only available on the New Nintendo 3DS. I’m not sure why this is the case, since it isn’t an intense graphical experience. There is no 3D, and the bottom touch screen is not used at all. Also, there is no online leaderboard! What a missed opportunity – I’d love to see how my scores compare with others.

These are minor complaints though, and overall, I really enjoyed this game and will continue to play after this review. It’s fun, it’s easy to pick up but hard to put down. It’s good value, and there’s a cross-buy promotion with the Wii U version that’s particularly nice. It looks good, sounds great and plays very well. I highly recommend this game!

This is a fun and addictive arcade game with cute Game Boy-esque graphics and a soundtrack to match. The simple game has some tricks up its sleeve to keep you chasing your high score.