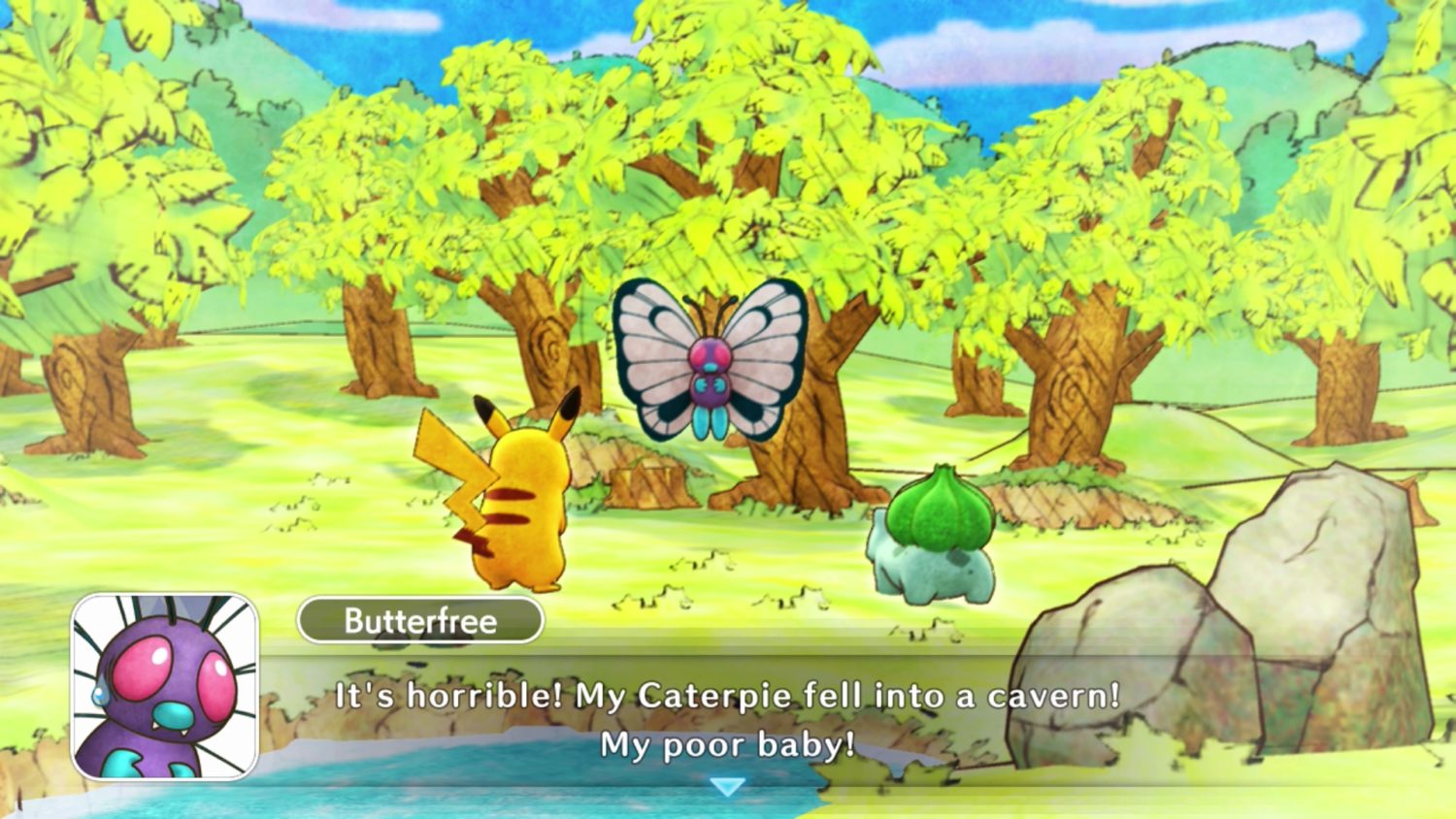 You play as a human in the body of a Pokémon who wakes up washed up on a beach. You have no memory of how you become a Pokémon or your life before your transformation. You immediately befriend a Pokémon and before you can make sense of your surroundings are encouraged to rescue a lost Caterpie.

You form a rescue team with your new friend and complete jobs for the local Pokémon community while you figure out who you are, how you become a Pokémon and what’s causing all the unusual earthquakes plaguing your new home. You explore various dungeons, battling and befriending all kinds of Pokémon, to complete tasks and level up your rescue team. Your investigation into both your own history and the local phenomena brings you into the presence of legendary Pokémon from throughout the generations. 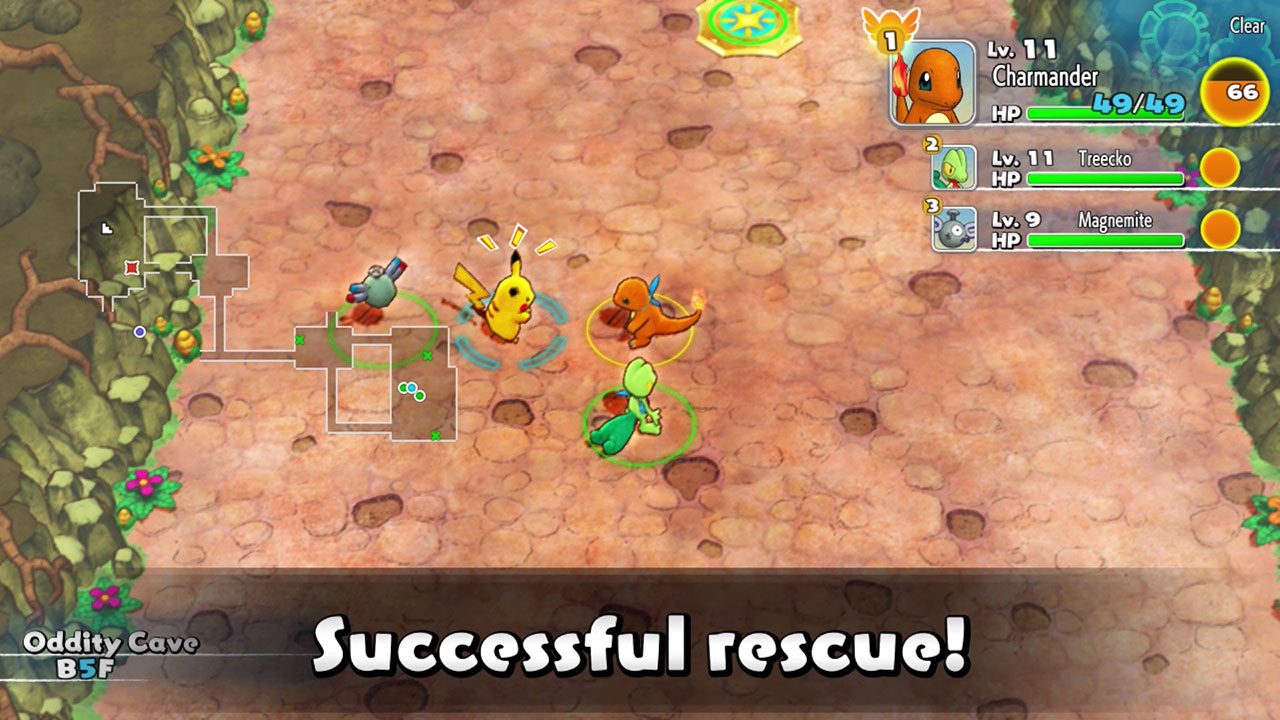 Despite the nostalgia value of it as a remake, Pokémon Mystery Dungeon: Rescue Team DX is clearly more targeted at children rather than adults who have been following the franchise over the past couple of decades. While you can put a lot of effort into developing a strategy for your team if you enjoy that, it’s possible to get through the game without putting much thought into it.

There are elements of it that as an adult I find cute, but that I might have found childish playing as a teenager wondering if it was time I grew out of Pokémon. For instance, there is a rival rescue team called Team Meanies who take obvious pleasure in the failures of others.

Pokémon Mystery Dungeon: Rescue Team DX is all about kindness, friendship and compassion, with an environmental lesson woven into the plot. Even the Pokémon you have to fight usually understand reason outside of the action sequences. I liked that in the first boss battle, it’s clear that Zapdos is lashing out because it doesn’t understand why its life is being disrupted. When you talk to it, though, you become allies. That’s a positive lesson for children and, let’s face it, far too many adults. 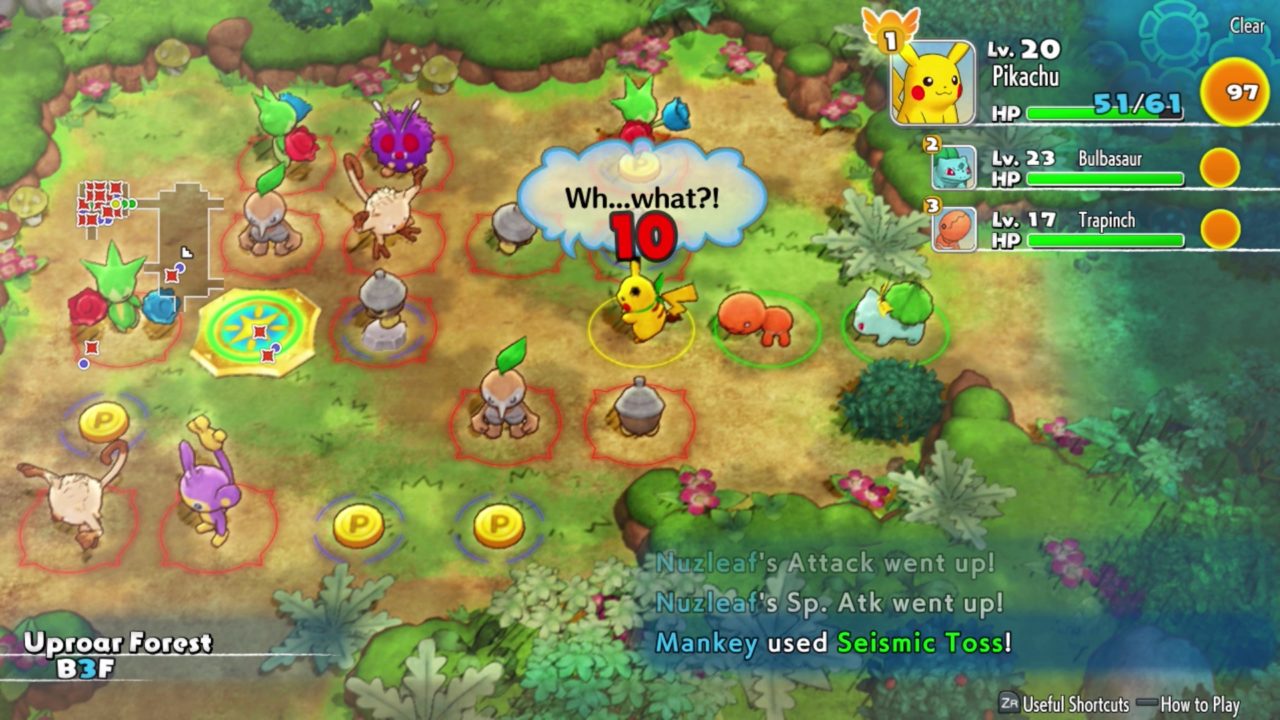 It’s nice that, although you are the main characters, you’re not the only heroes. Other rescue teams contribute to resolving the mystery and sometimes it’s your job just to make sure the community is coping during difficult times. I like that taking care of people is seen as being as important as the adventures in this game.

The art style is lovely, all soft colours and cute sprites. Along with the gentle music, this complements the game’s generally wholesome vibe.

The dungeon crawling, turn-based battling gameplay is fairly consistent. It’s a trope of both the genre and Pokémon games in general that this can get repetitive. The story does a fair job of breaking up the game so it isn’t too monotonous. It could lose the identical animation of Pelipper delivering you letters after every dungeon, though.

Pokémon Mystery Dungeon: Rescue Team DX doesn’t introduce anything new to the franchise, but it’s not a bad game.

Pokémon Mystery Dungeon: Rescue Team DX is exactly what you expect it to be: it’s a fun dungeon crawler with a cute art style, all your favourite Pokémon and an overarching message of love and friendship that is generally best suited to younger players.