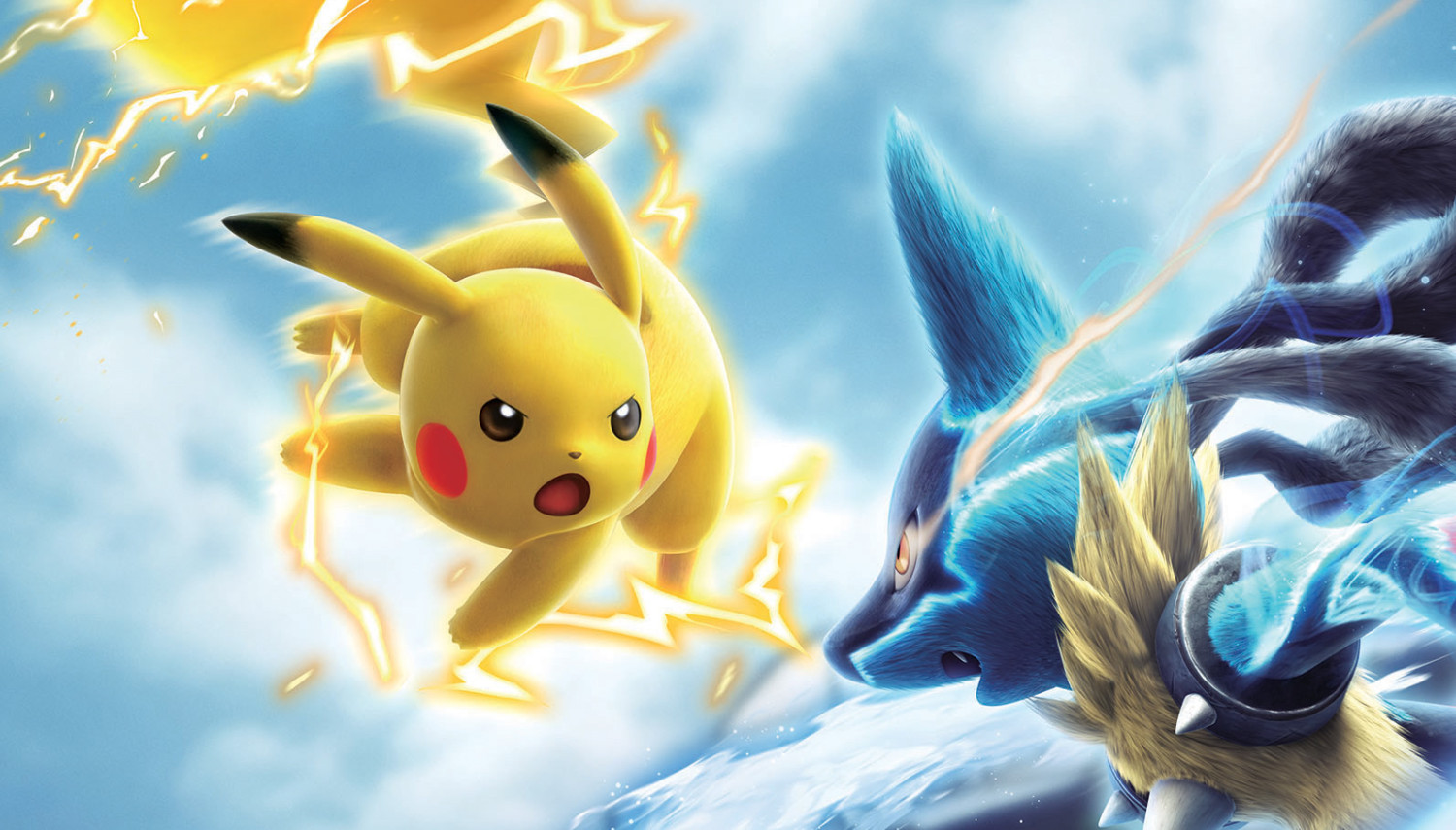 Pokken Tournament is a brand new Pokemon spin-off title from the makers of the Tekken series, hence the name Pokken (Pokemon x Tekken).  The game has elements of both 2D and 3D fighting games as players can switch perspectives by executing “phase shifts”.  I’ve played a lot of Pokken over the last couple weeks so let’s see how the game fared overall.

Pokken’s gameplay is very much a hybrid of a lot of different types of fighting games.  There are obvious elements from the Tekken series such as the signature combo system and 3D battlefields but then there are also moments of the battle that shift to a 2D perspective.  These phase shifts are an important part of the gameplay and can be executed using various combos and strong attacks.  Coming into Pokken, I had some experience with the fighting game genre going back to the original Mortal Kombat and Street Fighter II Turbo.  I’ve always been more of a button-masher with fighting games and Pokken has been no different.  Being a button-masher definitely has its disadvantages but none of those downfalls really stood out in my time with Pokken.  In fact, out of all of the matches I played, I only lost battles with Shadow Mewtwo at the end of each league master battle in the Ferrum League single-player mode.  You’d think battles would get more technical as I went along, and to a certain extent they did, but I could always win with a little timely blocking and some consecutive combos.  The game’s difficulty does ramp up nicely but it did feel a little one-sided at times.  The entire first league for example felt a little too easy as I was able to finish more than half of the matches with a “Perfect” at the end.  I wasn’t complaining too much because I was still having fun, but I do wonder how competitive the gameplay will be long-term, especially with the sparse selection of playable Pokemon to choose from (16).  Well, enough about the difficulty concerns, let’s get back to some of the battle mechanics. 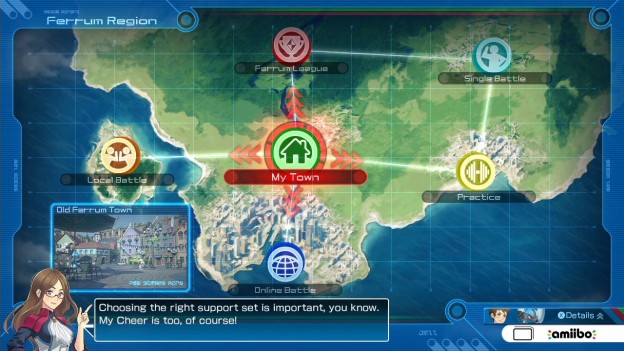 Each battle consists of up to 3 encounters.  If players win the first two bouts, they’ll win the battle.  If a player loses the first round, they’ll still have the opportunity to win the second and third showdowns to win the match.  Throughout the battle, players will accumulate energy.  This comes from successful combos, landing hits, etc.  Once the energy gauge is full, players can activate the energy boost and execute a powerful attack.  This attack can be blocked or dodged by the opposing character so it’s important to time the attack correctly.  Players also have a support gauge that will fill up and allow for a support Pokemon to join the fight.  Some support Pokemon will increase your Attack, boost your Defense, or simply attack your opponent with their signature move.  Players can even switch between the set of 2 support Pokemon in between the stages of battles.  If, for instance, you lost the first bout using one support Pokemon, you could try your luck with the other in the next round.  The system works really well and I had fun mixing and matching the available support Pokemon sets with my main Pokemon.  There are quite a few support Pokemon sets to unlock as well so be sure to play through the Ferrum League to unlock them all.  One thing I should also mention are the classes of each main Pokemon you can select.  There are Standard, Speed, Technical, and Power types.  I played around with each type and I really found myself liking the Standard and Speed types.  Suicune and Pikachu Libre were my favorites that I tried.  Also, players can customize button mappings for every move in the game.  The supported controllers are: Wii U GamePad, Wii U Pro Controller, Wii Classic Controller Pro, Wii Remote + Nunchuk, and the Pokken Arcade Pad. 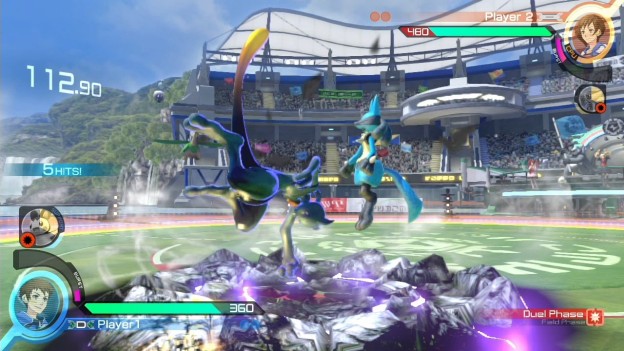 Visually, Pokken Tournament looks fantastic!  Pictures don’t do this game justice.  You need to play it and see it in motion.  Everything from the battle animations to the environments are incredibly detailed.  In fact, you’re going to be wanting that full-3D Pokemon MMO even more after playing Pokken.  There is one level in particular that’s set on a farm and it looks like it’s taken directly from a Pokemon RPG game.  You’ll see Tauros in the background and Ursaring and tons of other Pokemon that you, sadly, can’t play as in the game.  The times where the game really shines is when the Pokemon execute their energy boost moves.  Each move is unique to the Pokemon and there are some really cool animations.  Sceptile had a really cool grass-type attack and Shadow Mewtwo’s was a sight to behold even if I was on the receiving end of it!  All in all, the visuals and framerate in this game are amazing.  You’ll consistently be thrilled with the sheer speed of this fighting game.

Multiplayer is a big aspect of any fighting game and Pokken Tournament is no different.  The game features local multiplayer where one person plays using the Wii U GamePad and another plays using a controller like the Pro Controller.  There is also an online mode that allows for ranked matches (sort of like the “For Glory” matches in Smash Bros.) and friendly matches that are more for fun or practice.  Friends can also meet up and play online.  I didn’t use this feature for the review but it looks like it uses a passcode that you would need to send to a friend to join/host a match online. 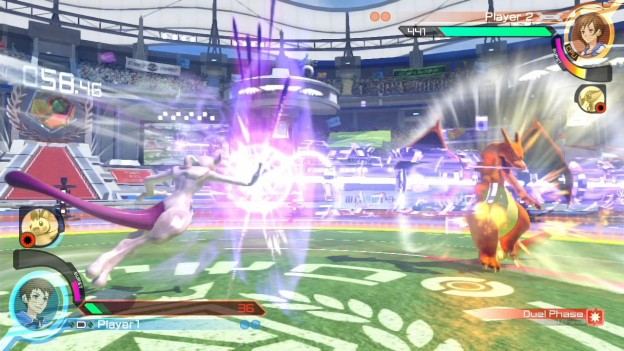 Overall, Pokken is a great new addition to the series of Pokemon spin-off games we’ve received over the years.  The gameplay is fast and fun, but it is light on content.  With over 700 Pokemon and only 16 that are playable in the game, it really feels like a big tease.  Hopefully, later DLC will be added to the game to extend the roster.  Even still, there’s a lot to keep you occupied for awhile in the Ferrum League and multiplayer even with the roster as it is.  If you’re even a casual fighting game fan and like Pokemon, you’ll definitely get a kick out of Pokken Tournament!

Overall, Pokken is a great new addition to the series of Pokemon spin-off games we’ve received over the years.  The gameplay is fast and fun, but it is light on content.