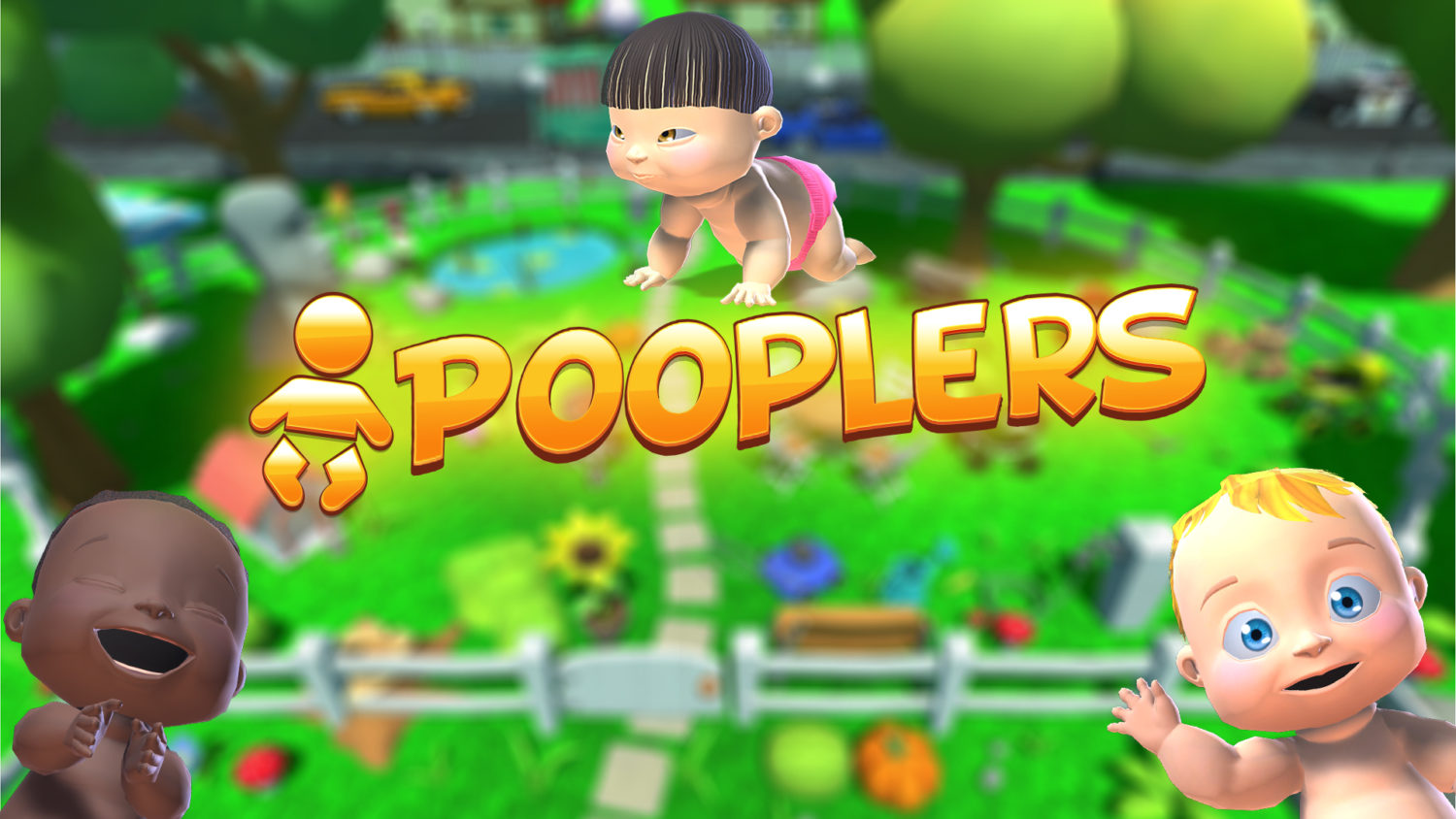 Move over Splatoon, Pooplers is here. Pooplers is an action party game for up to four players locally with a variety of game modes: Free for All, Team Match, Parents VS Kids, Defend the Horde and Football. Let’s see if this game should be invited to your next gaming party.

In Free for All, each player controls a baby and the goal is to smear as much of your poo on the floor as possible. While doing so, the babies are trying to avoid the mom or dad. If a parent is looking at your character while smearing your poop on the ground, they will pick you up and attempt to carry you to a crib. Players can try to wiggle out or their hands by pressing a button. Once in the crib, a few seconds go by before you can start to crawl again. There are also safe zones, which are potty-training toilets; if the baby is sitting on the toilet, they will not be picked up by the parent. At the end of the set time, the baby with the most of their shade of poo on the ground wins. Team match has pretty much the same set of rules as free for all except players are on a team. 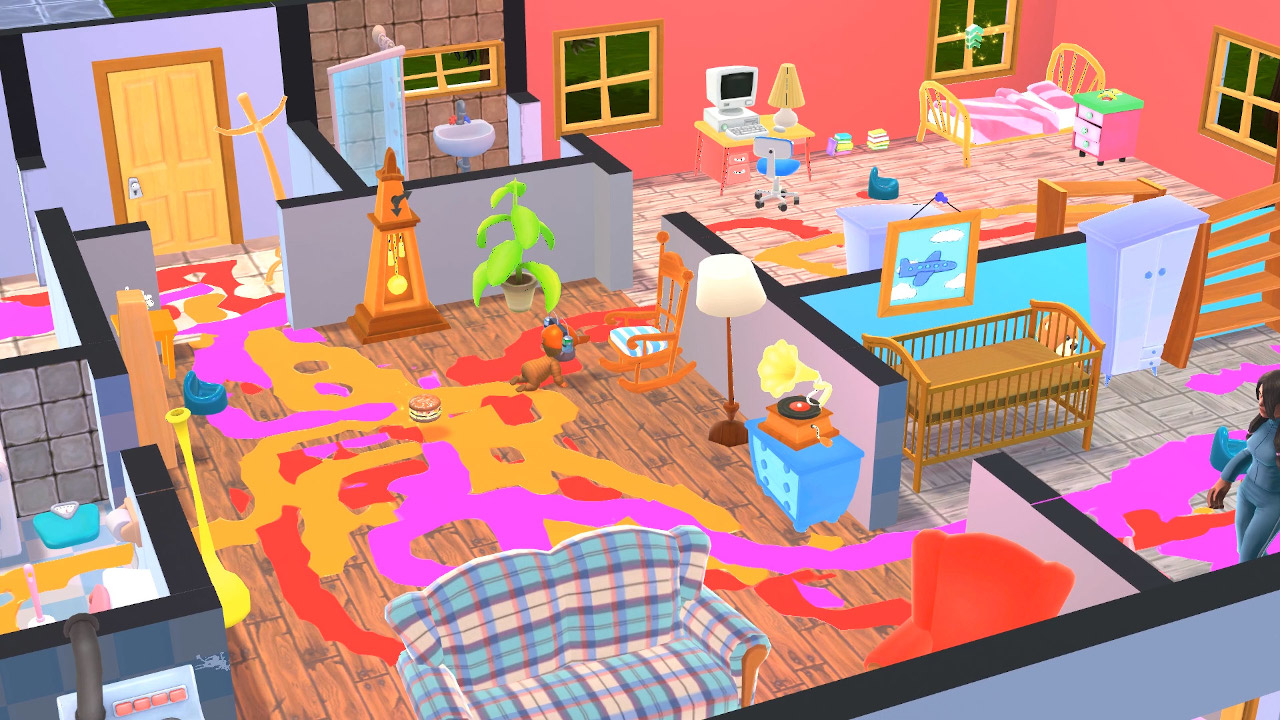 Most of the game modes offer power-ups that allow for things like running, broader streaks, changing other babies to your team temporarily, and traps. There are also ten different stages to choose from. They offer your typical areas like home and outside, but also more bizarre ones like space and under the sea. 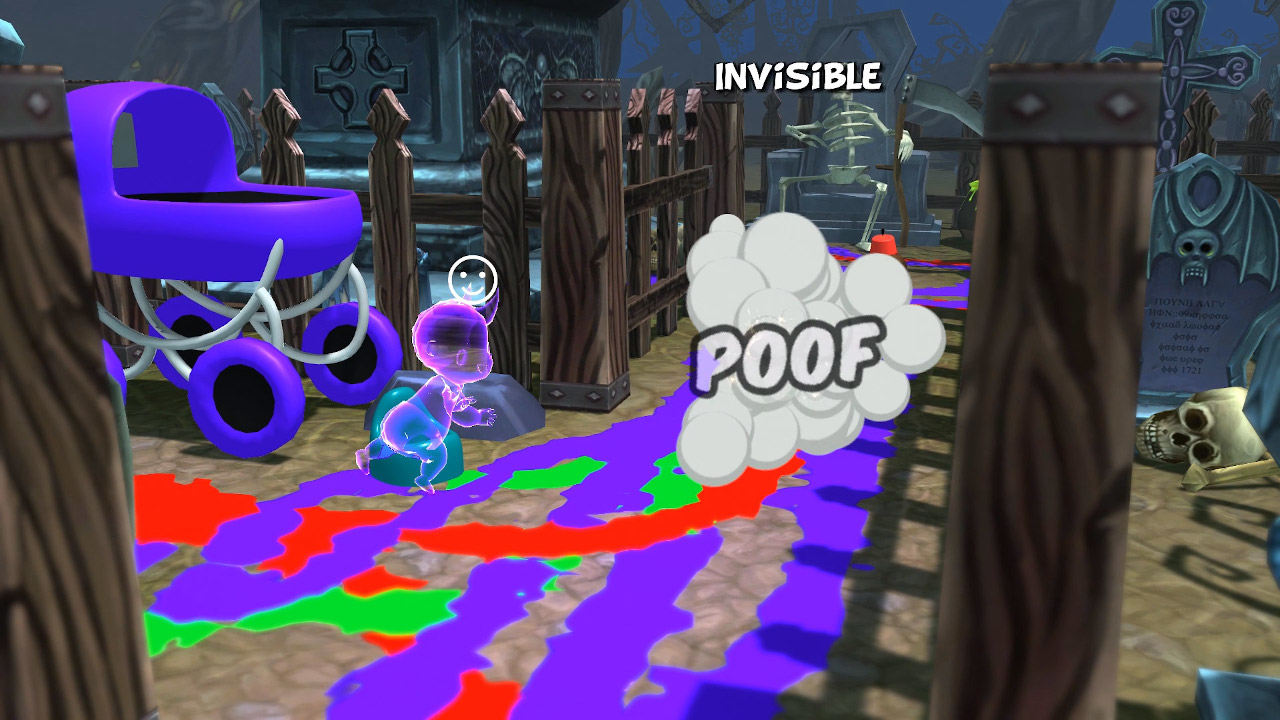 In Parents vs. Kids, players are divided between either being a parent or kid (shouldn’t this be baby?). It plays like Free for All except the kid’s goal is to reach a certain percentage of coverage. In contrast, the parents try to either capture the babies or clean up their mess.  When the time limit expires, if the percentage needed to be covered is not reached, the parents win.

Defend the Horde is much like tower defense. Babies use their rattles to defend a pile of candy from zombies. The goal is to survive as many waves as possible before the candy is all eaten.

In Football (soccer), the objective is merely to push the ball into the opposing teams net. Players can press a button, causing the baby to fart, giving a little extra push to the ball. At the end of the set time, the team with the most points wins. 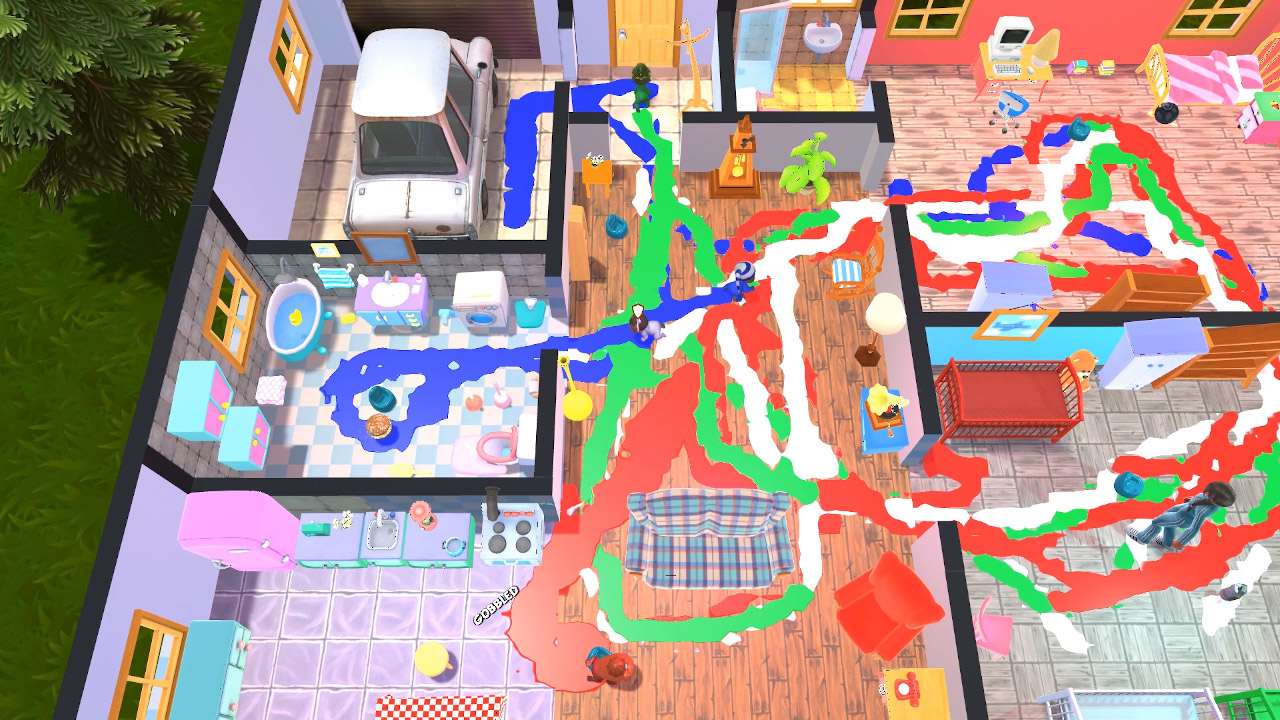 Before each match, players can customize their baby to be wearing a wacky outfit and or hat. If you are playing as a parent, you can also customize them if you so desire. Some of the costumes were funny but nothing too exciting.

The game is local multiplayer only; it does not offer online play. During gameplay, I found it possible to crawl through the wall of the stage and be left floating in space. There were also times where I was able to crawl into or behind an object allowing me not to be able to be picked up by the parent. It became more fun trying to find where I could crawl through a wall or an object to hide behind.

What I thought was going to be a more crude version of Spatoon turned out to be just crude. Unfortunately, although several ways to play are available, I didn’t find any to be entertaining. Most just felt like the same thing over and over and were quickly dull and repetitive.

My time spent with Pooplers was disappointing as it wasn’t fun. I thought to myself several times when playing, “Who thought this was a good idea?” and “People are expected to play this and enjoy it?” I would not suggest this game to be played at your next gaming party or at all.

My time spent with Pooplers was disappointing as it wasn’t fun. I thought to myself several times when playing, “Who thought this was a good idea?” and “People are expected to play this and enjoy it?” I would not suggest this game to be played at your next gaming party or at all.