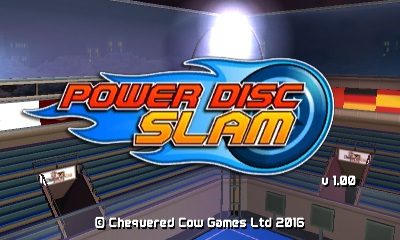 I wanted to like this game, I really did. Although I’m not much of a sports enthusiast, I was excited about trying a sporting title, a genre that’s admittedly lacking on the 3DS. So I went into this one with an open mind. And whilst it’s not terrible, it’s unfortunately far from good.

The game shows promise at first, with a professional-looking intro screen and decent 3D graphics – a rarity I’m finding in a lot of the smaller eShop titles lately. The graphics are a little on the dull side overall, with some odd-looking character movements, but generally they paint an above-average picture for a budget title like this. And the 3D is nicely done. The whole game is played from a top-down perspective, so the depth adds to the feel of the sport.

The sport itself is a little like a game of frisbee on a tennis court. Two players face off against each other, flinging a disc back and forth until it either hits the ground or the back wall, both resulting in points for the thrower. It’s fairly simple gameplay, and is fun and fast paced, even slightly addictive – to a degree. The main problem with this title is the controls. 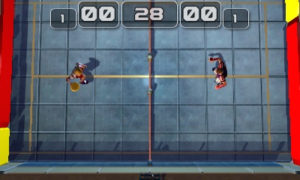 Moving around on the court feels really imprecise, like your player is skating instead of running. It’s extremely hard to run and stop at the right place in order to catch the disc, and I often missed because of this. It’s frustrating, and unfortunately throwing is no easier. Simple throwing is fine but anything more complicated than an angled shot – like a curve shot – is almost impossible to pull off. I found it very difficult to score points, even on the easiest setting. This kind of steep learning curve does not bode well for replayability. I had to play more than ten matches on the easiest setting before I won a game. It takes a lot of patience to get used to the dodgy controls.

The sound is decent, with lively, slightly futuristic-sounding themes. It’s nothing special but it fits the mood of the game well.

Something else for the plus column: this game does offer plenty of options. The menu presents five modes right away, with arcade, free play, cup, survival and mini-games available. If that weren’t enough, you can play solo or against another person, either locally or online. You want more? You can also do training or run through a tutorial, and there are plenty of difficulty levels too.

Sadly I wasn’t able to actually try the online mode, since (I presume) the game wasn’t popular enough to have anyone else online for me to play with.

There are eight characters to choose from, each with varying abilities of power, speed, skill and control. I’m not sure whether they make a huge difference, but I found some characters slightly better than others after experimenting. You can also customize the characters a little, with two clothing color choices and the option to wear or not to wear goggles.

Finally, there are records to peruse, like personal highscores and online ranking. There are even game stats that show the most popular and least popular character, stage, mode and mini game.

Speaking of mini games, I think this is the mode that saves the game for me. It’s the same court-based disc-throwing sport, but instead of another player, you have to score points within a time frame while avoiding obstacles. Since less running and catching was required, I found this mode the most accessible and spent some time here. 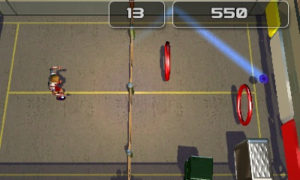 Even with multiple modes, the simple premise is essentially the same throughout: throw a disc and score points. Despite 3D graphics, decent sound and plenty of options, the experience is marred by control issues. Further to this, the game crashed several times during play, even forcing a complete shutdown of my 3DS. These are frustrating issues that should not be present in a final version of a game. After several crashes, I only went back into the game because I had to for this review – I doubt a paying gamer would be as forgiving.

An addictive premise marred by jarring controls. As much as I appreciate the amount of content and the half-decent graphics, I really can’t recommend this game based on the control issues.