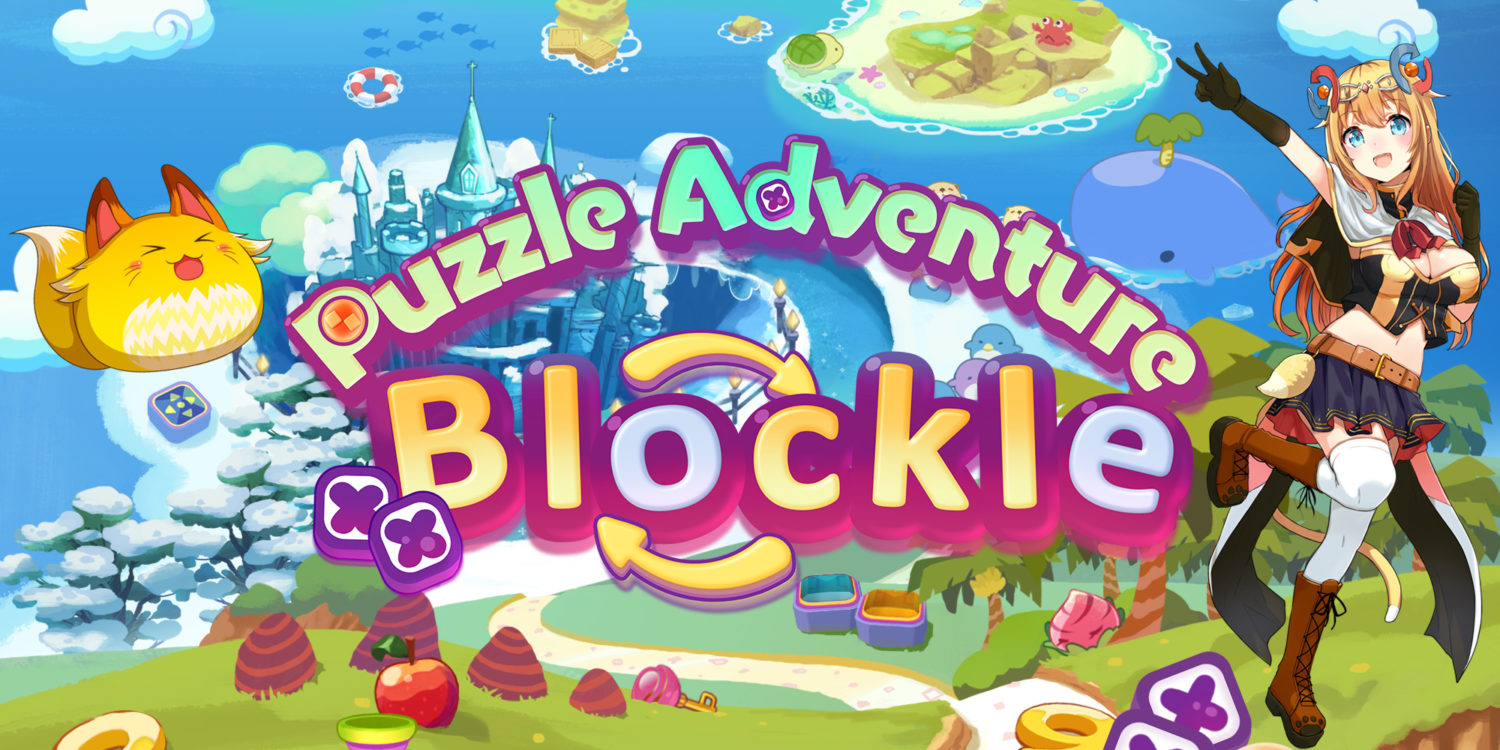 So far there have been quite a few puzzle titles released for the Nintendo Switch. Puzzle Adventure Blockle is another one you can add to the list, but this one isn’t your typical puzzle game. Meet Kulu, a cute little cat creature, and his busty (and I mean, really unnecessarily BUSTY!) goddess friend, Arika. They have been tasked with collecting 7 powerful stones for the Mayor of Kulus village… apparently so he can achieve world domination. Weird huh? Anyways, odd storyline aside, the gameplay is what makes Puzzle Adventure Blockle so fun! 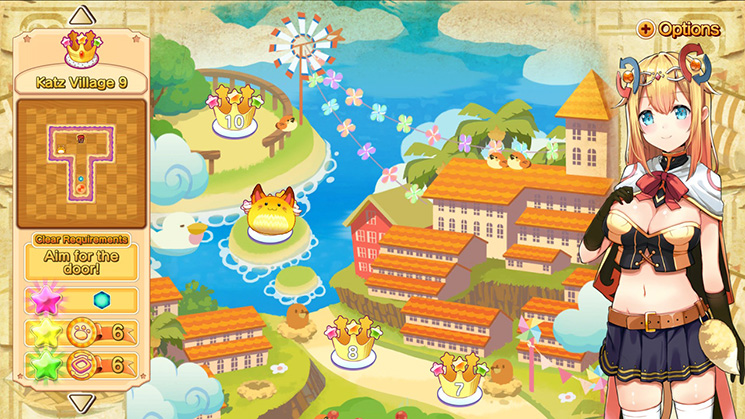 I suppose when all you’re doing is completing puzzles, the need for a strong storyline just isn’t there. However I did enjoy the dialogue between characters most of the time. There were some clever lines that actually made me chuckle a bit. I probably would have chuckled a bit more if they didn’t ramble on for so long, but you can easily skip through the cut scenes if you’re not interested in whatever randomness is being said. The beginning of the game is very simple in order to get you used to the mechanics and controls. It reminds me a lot of the game Pushmo for the 3DS. To complete a level, you have to use the environment and create a path to the exit. Luckily for Kulu, his (busty) friend Arika has a special ability that allows her to rotate the different lands and help him reach his goal. 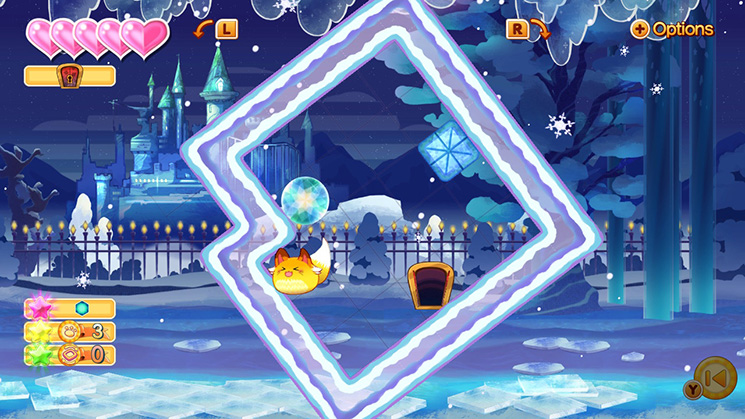 You can move Kulu from right to left with the joystick (I played using the Pro Controller) and he can also climb a very short distance onto a higher platform. Using Arika’s ability you can rotate the level 90 degrees at a time by pressing the L and R buttons. This will give Kulu an opportunity to reach new areas or open up a secret area. The levels start out pretty basic but the difficulty rises as you progress. New elements and obstacles are added, like moving platforms, portals and much more. There is also a handy dandy undo button, so messing up a little bit won’t hurt you and you can plan out your next move more strategically. Each level also has three challenges that you can complete to reach a perfect score. For example, completing the stage in a certain number of moves, or a certain amount of time. These are not required to finish but they add a nice, fun little task that makes the game last a bit longer. Not to mention some of the challenges are really hard so it also gives you some well-deserved satisfaction if you can complete all of them. 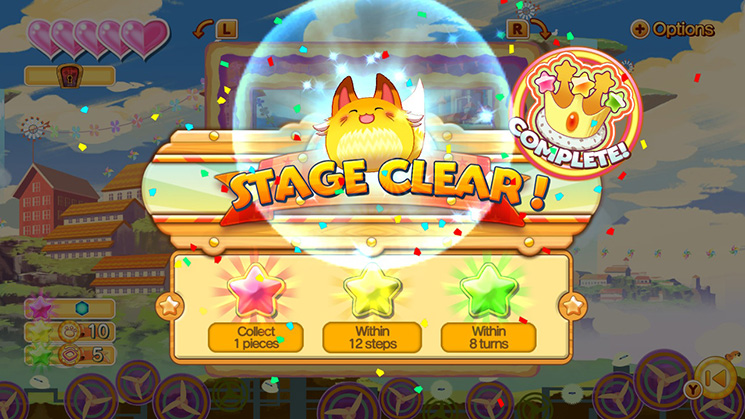 Visually, I enjoyed the cartoony style of Puzzle Adventure Blockle. While the game does have it’s odd pervy moments, most of it can be quite charming. Aside from the ridiculous proportions of Arika, everything else has a cute, colorful look to it. There is also a nice variety of level backgrounds and environments for Kulu to explore and the cut scene illustrations look great. The music doesn’t change much throughout the game but since you don’t spend much time on one level it doesn’t get too annoying. Overall the game looks great aesthetically, on both the TV and in portable mode. 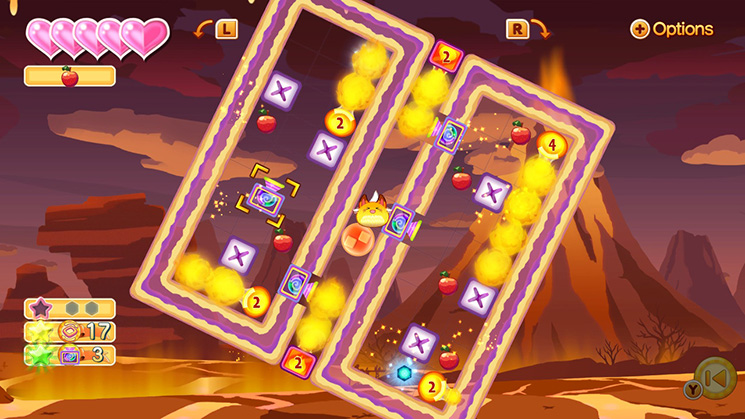 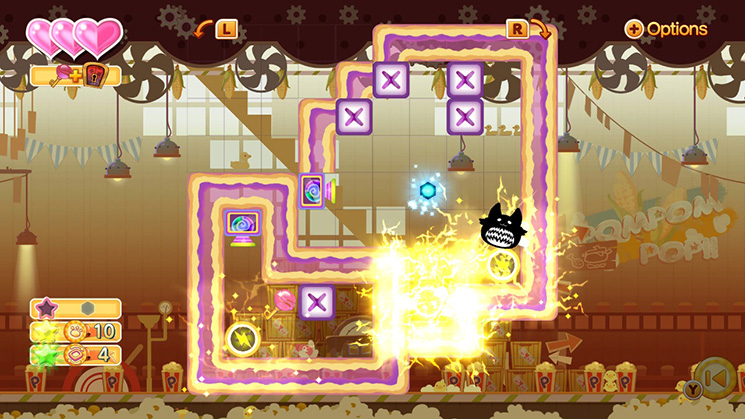 The only problems I had with Puzzle Blockle adventure were very minor and didn’t really affect the gameplay too much. It would have been nice to have a two-player option for those of us that game with another. It would have been even better to go up against other players online and compete for high scores. My other problem, and this is my main problem, is Arika. I know I’m being a bit persistent about her appearance but I find it annoying and I really just don’t understand why she’s even a necessary character. I mean, girl power and all, but put a shirt on, woman! 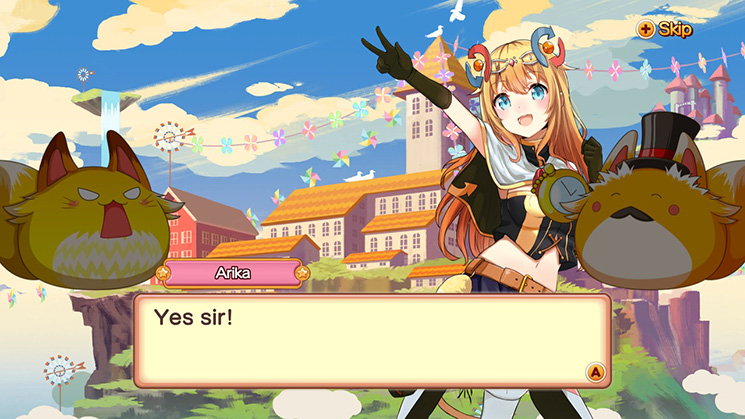 Overall Puzzle Blockle Adventure is a fun game that will give you lots of challenging entertainment, especially if you plan on going for 100%. Even though I couldn’t stand one of the character designs this is definitely a game I want to fully complete and will continue to play. If you’re a fan of puzzle games I highly recommend checking it out. Whether you’re a beginner or a veteran, Puzzle Adventure Blockle is sure to satisfy, in maybe more ways then one (haha). If you’re interested in learning more head over to the Nintendo Switch eShop where you can download Puzzle Adventure Blockle for the very fair price of $7.99.

Guide Kulu through 8 magical worlds and tons of crazy puzzles. While the game will keep you busy for a while, with different objectives and new challenges it would have been nice to see some more side content or unlockable features. But overall I had a pretty good time while playing. Puzzle Adventure Blockle is a nice addition to the Switch eShop and worth checking out.