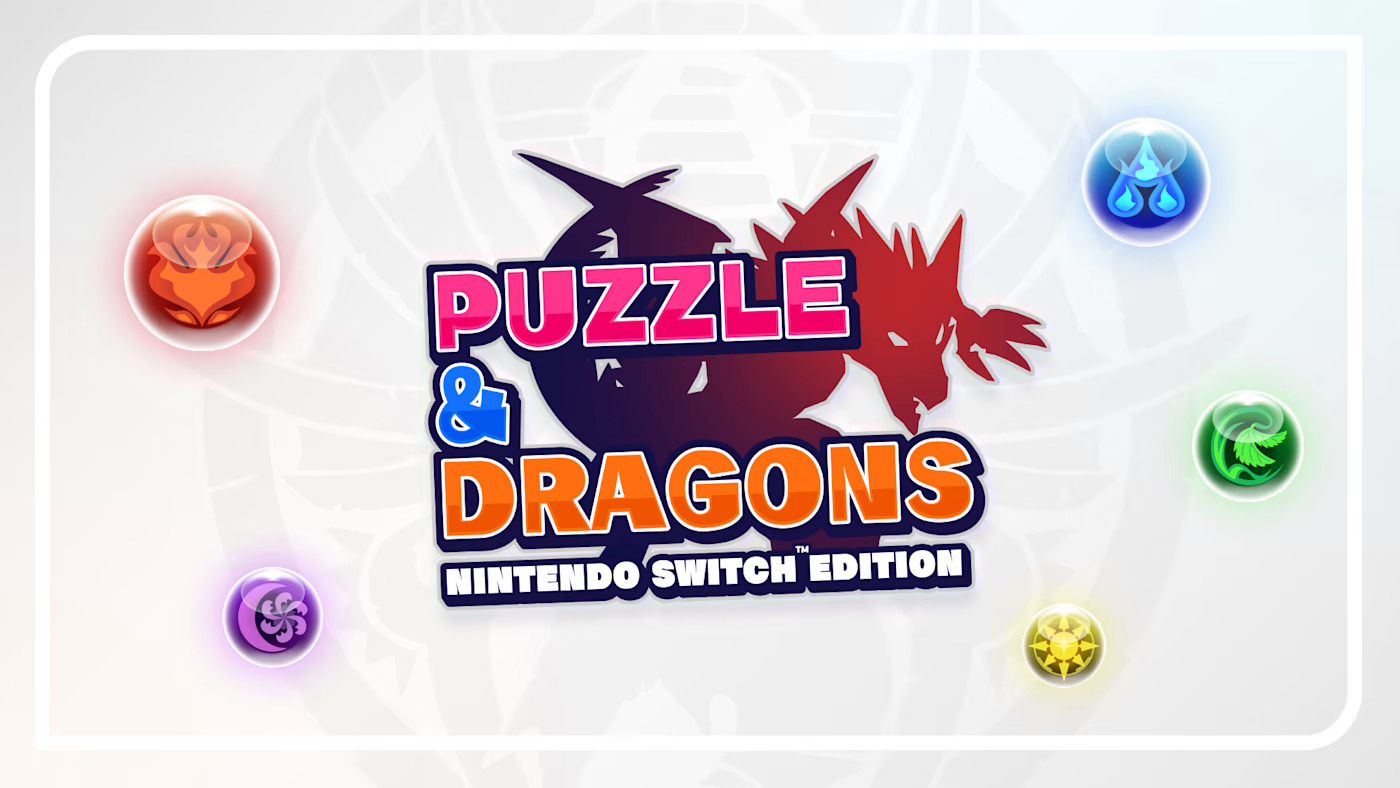 Puzzle & Dragons has been around for about a decade, debuting on mobile devices way back in 2012. Since then, the game’s combination of match-three puzzles and RPG elements has graced many devices, including a special Mario edition for the 3DS and a Gold edition for the Switch itself. So let’s take a look at this latest version to grace our screens, aptly titled the Switch Edition.

The core match-three gameplay hasn’t changed. In Puzzle & Dragons, your goal is to match three orbs of the same color to eliminate them while more orbs fall into place afterwards. Unlike other similar games where you simply swap adjacent tiles, you can take any one orb and move it around the board, knocking others out of the way until you finally release it. One of the most engaging elements is using that single orb to create as many combos as possible.

So that’s the puzzle part of the title. The dragon side of things comes from your team of fire breathers who attack on your behalf depending on the orb color you’ve eliminated. Your enemies vary, with standard RPG foes like blobs and knights whose health is depleted with each successful combo. Multiple waves per level keep you on your toes as the strength of foes increases, culminating in a boss battle for the final wave. 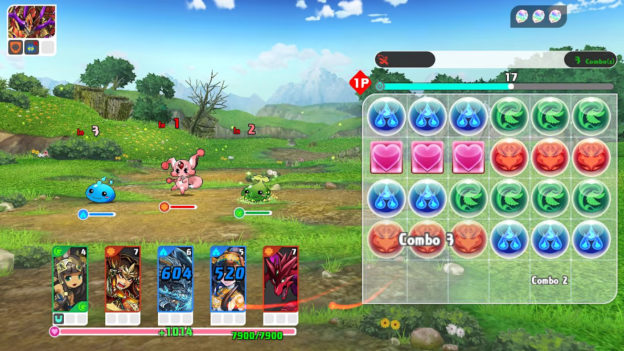 This element is a fun and addictive schtick that makes it easy to see why Puzzle & Dragons works so well on mobile devices. You’re not just matching three items of the same color, but using the power of those combined orbs to attack hideous creatures. It’s a twist on the formula that’s still fun, even after ten years.

Each level is set within a stage that harbors themed enemies. For example, if you’re in a volcanic pit, you’ll be fighting more fire-type enemies. A little strategic thinking comes into play, since each orb and respective dragon also represent an element. Simply put, your attacks are more effective if you use the right elements against each other.

The game starts super seriously, with terms, conditions, and other policies to accept before proceeding. You also need to identify which country you’re in. I’m not sure why it’s necessary – probably some sort of licensing issue – but it’s not something I tend to come across in Switch games often, and it threw me off at first, like I’d agreed to something meaningful. It reminded me that this game has strong mobile origins, since we’re used to agreeing to all sorts of app disclaimers. Once you agree with the conditions that come with this version, I didn’t notice any further legal mumbo jumbo. 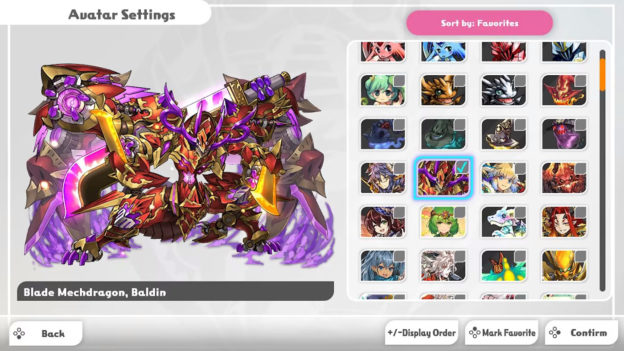 Puzzle & Dragons has a few modes to keep you entertained. The Quest Mode is for local play with up to four players. Here you’ll work your way through 70+ levels, upgrading your team as you progress. In PvP Mode, you can join players worldwide in an online competition to see who can earn the most points in a battle. Finally, Custom Mode lets you create, share, and download levels from other players. After finishing the quest, this mode will keep you coming back for more, with some much harder levels on offer from masters around the globe.

There are achievements and rewards to unlock along the way, which are easy to come by when you begin playing. I seemed to unlock a bunch after every level. They’re fun to collect and add an extra incentive to keep playing, earning you new avatars and backgrounds to use on your profile. I particularly enjoyed how some bonuses are unlocked, coming in the form of an egg machine. You have to “pull” a dragon’s arm, which sends it soaring into the sky. When it opens its wings, an egg drops down and your prize is revealed. It’s a silly yet cute way to discover my winnings.

There is a limit to these rewards, though. Puzzle & Dragons comes at a low price point of under $5, which is great for casual gamers who fancy something to fill their spare time. However, it comes to us so cheaply because of microtransactions. While some rewards are unlocked simply by playing, most are only available via a paid pull of the egg machine. These aren’t cheap either, setting you back a couple of dollars each time. Thankfully, these microtransactions aren’t thrown in your face like other iterations of this series have been known to do. 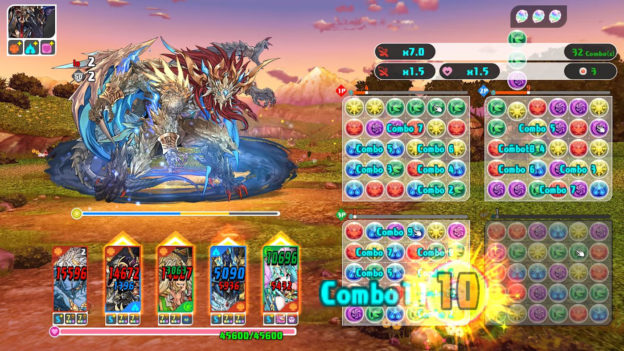 Aesthetically, Puzzle & Dragons has a colorful, fun vibe going for it. It feels like it’s inspired by cute anime, then mashed together with a cross between Final Fantasy and Candy Crush. The music is suitably toned, with upbeat tunes that would fit into any given anime-flavored RPG you can think of.

The only real criticism of the game is that it’s a bit same-y after a while. After 20 levels of undefeated orb-matching in Quest Mode, I found myself growing bored. The online modes seemingly add variety, but you’re doing the same thing, just with invisible players from another country. The difficulty balance seems a little off, too. In Quest Mode, I had no trouble defeating enemies and leveling up my team. Then I downloaded someone’s custom stage and didn’t stand a chance. There’s no indication of difficulty level, something I think is missing. There’s also no reason to replay levels, since there’s no rating system, another odd omission that could create a stronger drive to keep playing.

Overall, Puzzle & Dragons Nintendo Switch Edition is another version of the popular mobile game that comes at a low enough price to give puzzle fans something to play for a few hours. Making your own levels and downloading others is a fun distraction, but overall there’s nothing new on offer here.

Puzzle & Dragons Nintendo Switch Edition brings the popular mobile game to the Nintendo Switch. It comes at a low enough price to give puzzle fans something to play for a few hours. Making your own levels and downloading others is a fun distraction, but overall there’s nothing new on offer here.