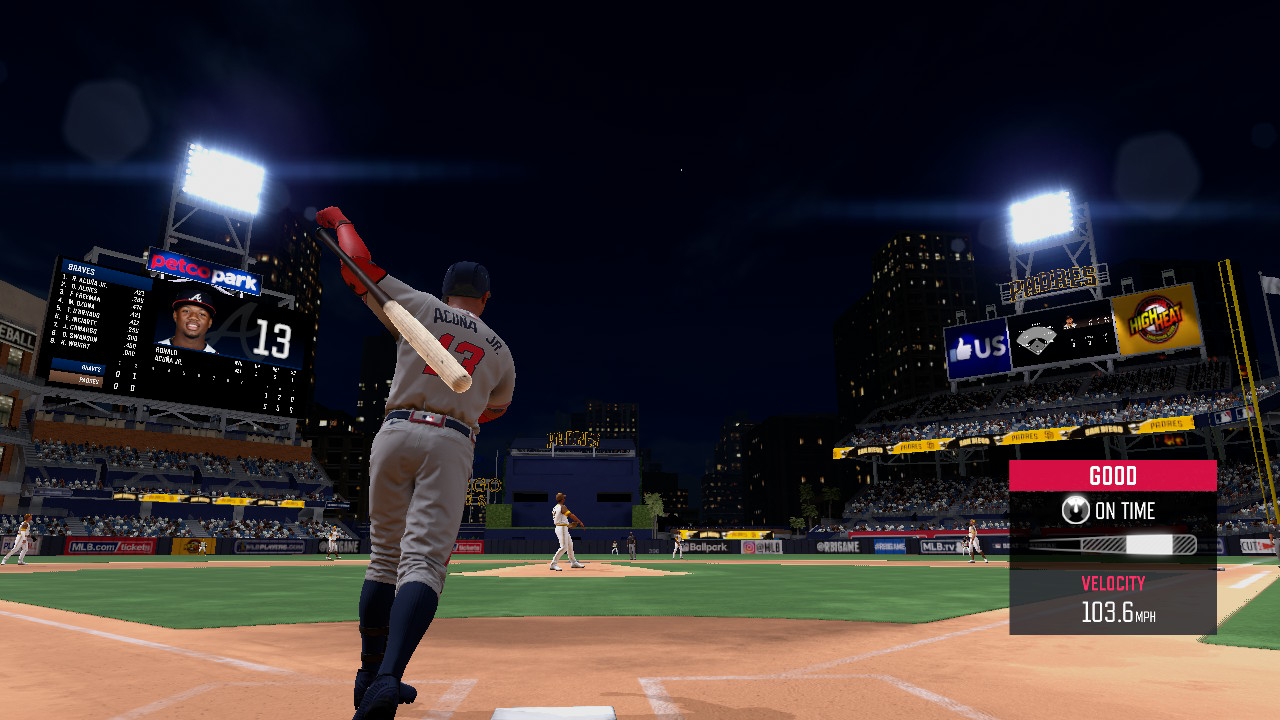 MLBAM is getting into a groove with the R.B.I. Baseball series, but it still has some work to do. This time last year, R.B.I. Baseball 19 was one of the only arcade baseball games available for the Switch. Since then, Super Mega Baseball 2 has come on the scene and provided an incredible all-around baseball experience on-the-go. Let’s see how R.B.I. Baseball 20 has improved over last year’s edition and if it can compete in this growing genre.

First and foremost, R.B.I. Baseball 20 has some nice improvements. Let’s start with the biggest improvement: the pitching. The game had really basic pitching options last year. Players could control the movement of the pitch on its way to home plate, but it was limited to curving a ball inside or outside. Players could also do a pitch that looked like it was wobbling in mid-air and would land short of home plate as a sort of change-up/eephus pitch. Now, every pitcher’s arsenal is represented in the game. If there was a pitcher that had a 2-seam fastball, 4-seam fastball, and a cutter, those are now selectable when pitching. Players can select the pitch type from a radial selector and then choose in two dimensions where they want to place the pitch. As the pitcher gets tired, the aiming system adjusts to simulate that fatigue. It’s well done and definitely a step up from last year’s pitching. An added bonus is the game’s use of the Switch’s HD Rumble feature. If you’re aiming for the outside of the strike zone, the HD Rumble vibrates more heavily to let you know the pitch will not be called a strike. It’s a subtle thing, but extremely helpful!

The game also features improved visual details both in the player models and also with the stains that the players get throughout the game. Have a player that slides into 2nd base? They’ll have dirt on their pants when they come up to bat next. Grass stains are also there if a player dives in the outfield for a catch. Speaking of dives, that’s another new feature this year. Players can now dive on command, which adds some much-needed nuance to the fielding. The visuals seem sharper, and the performance has also improved. I reported last year that the home run derby and even the core game featured some weird stuttering. That no longer seems to be the case, even in handheld play. The game also seems to have more reliable out/safe calls, especially at first base.

You might be saying, “Justin, all of this sounds great!” Yep, but that’s not the whole story. There are some great improvements, but there are some missteps. The biggest problem I found with this 2020 edition is the new ‘Modern’ hitting controls. It’s absolutely the most frustrating control mode ever. Now, to the game’s credit, it does not force this mode on the player. Players can, at any time, choose their hitting style–and there are a variety of styles. What’s really sad is, even after attempting this supposed “new and improved, modern” hitting style, it just wasn’t working well enough to continue using. It forces players to hold the swing button down and then release when they want to swing. It seems simple enough, but oh so difficult and unreliable in practice. This new hitting mode has a more catcher-based view on the pitches coming in, much like Super Mega Baseball 2. However, even though there’s another dimension to work with in the ‘Modern’ hitting mode, you can’t actually control where your bat is going–it’s strictly timing. The ‘Classic’ hitting mode is pretty one-dimensional, but it at least allows you to move your player fully around the batter’s box in addition to timing your swing easily with a press of the swing button. You can more easily hit the ball the opposite way and really get a better sense of where you’re hitting the ball on the bat. The ‘Modern’ hitting mode needs major improvements even if they made it so you didn’t have to hold the swing button and release. Also, let us control where the bat is swinging! Just like I can move my player around the batter’s box in ‘Classic’ hitting mode, I should be able to move where my bat is going to swing in the ‘Modern’ hitting mode.

The new base-running controls are improved, but guess what? You have to use them in conjunction with the ‘Modern’ hitting controls. This is very frustrating–as the new baserunning controls make a lot more sense, but the ‘Modern’ hitting, as I’ve mentioned, most certainly does not. Hopefully, this could be resolved with a patch. Another strike against the game, specifically with the Switch version, is no online multiplayer. Now, last year’s version didn’t have online multiplayer but guess what? R.B.I. Baseball 20 for Xbox One and PS4 both have online modes. This seems like a huge oversight to not have online for the Switch audience, especially when Super Mega Baseball 2 has it, and it works well. I didn’t have too many ‘bugs’ but there are definitely some baserunning issues. Sometimes the lead runner wouldn’t advance, and if a player made it to the next base (2nd for example) without tagging up (for a long fly ball), you couldn’t get them to retreat back to 1st base and so the defense would get an easy double-play.

For the most part, R.B.I. Baseball 20 is the best the series has been in a lot of areas–even the soundtrack is better this year! That being said, they are no longer the only game in town. With other baseball games offering more solid gameplay, the R.B.I. Baseball series really needs to up their game. I prefer playing with real MLB teams, but if the gameplay isn’t as fun and engaging, more and more people will go to another arcade baseball title. R.B.I. Baseball 20 is a very solid experience, but not all of the new features hit a home run. And, no online multiplayer for the Switch audience makes the Switch version really hard to recommend over its console counterparts.

For the most part, R.B.I. Baseball 20 is the best the series has been in a lot of areas–even the soundtrack is better this year! That being said, they are no longer the only game in town. With other baseball games offering more solid gameplay, the R.B.I. Baseball series really needs to up their game. I prefer playing with real MLB teams, but if the gameplay isn’t as fun and engaging, more and more people will go to another arcade baseball title. R.B.I. Baseball 20 is a very solid experience, but not all of the new features hit a home run. And, no online multiplayer for the Switch audience makes the Switch version really hard to recommend over its console counterparts.