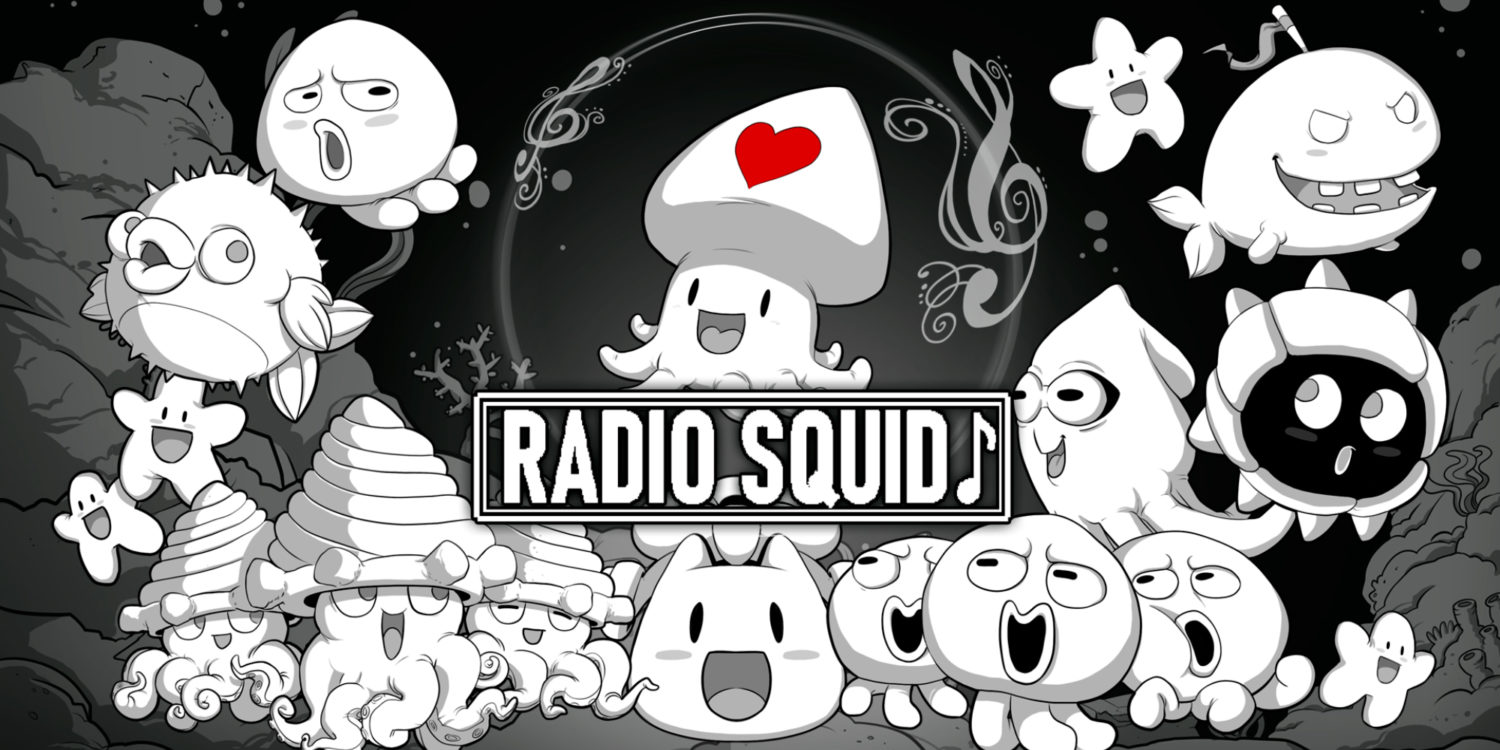 On paper, Radio Squid sounds like a neat concept that could easily charm you straight to your heart. Straight out of the box, you have a retro 2D monochrome aesthetic combined with a beat-based shooting mechanic alongside an adorable little cephalopod to control. Sounds simple and easy enough to get behind, right? Sadly, while Radio Squid may be easy to understand (and at times a tad annoyingly frustrating) with its main hook, it just so happens to fall short with both its premise and execution. 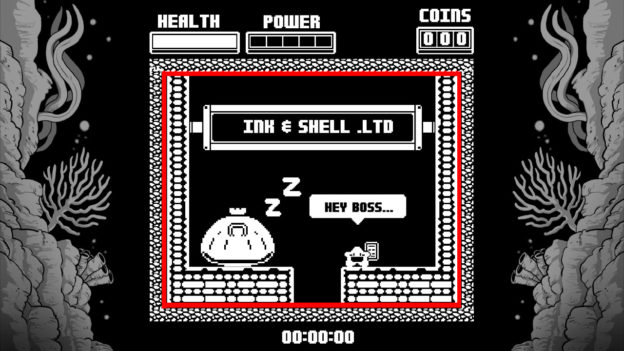 Developed by Pixelteriyaki, Radio Squid has you in control of a young cursed squid who must traverse the depths of the ocean. On your journey, the titular squid must then use the Siren Song to help shoot down various deadly sea creatures you encounter to the beat of the background music. As you enter each squared space with varying deep-sea enemies throughout the game’s 24 levels, you are presented with the Siren Song, which grants you the power to shoot projectiles. Unlike other twin-stick arcade shooters, your projectiles are shot (along with the amount of rounds used) to the tune of the soundtrack. Now while you obviously do have control of which direction to aim, your rate of fire does range on the beat, whether it’s slow or fast. Most of the time, you will find yourself having to maneuver past the enemy fire, adjusting your aim accordingly to the ever-changing background music. In a way, it’s an odd balancing act between aiming and your shooting since the fantastic and snappy chiptune beats don’t feel like they match up correctly with the fire rate. The hook altogether feels half-baked and inconsistent at times. 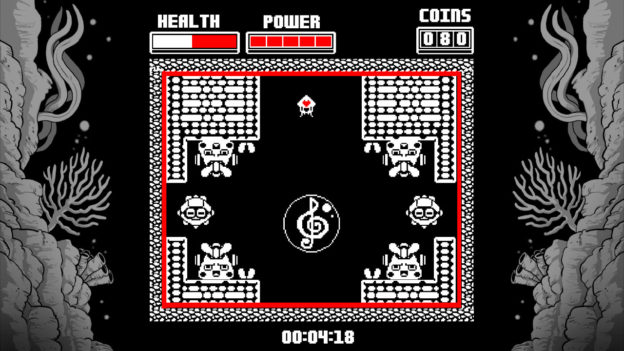 In addition to carefully bobbing and weaving enemy fire, you are also susceptible to your own projectiles, which also can bounce off the walls. This fact alone is kind of helpful since taking advantage of the environment allows you to strategically find ways to bounce shots at enemies. But, this is also a detriment that can lead to many instances of friendly fire. Since you are confined to such a cramped square sized space, it becomes a punishing affair when multiple dots are bouncing left, right, up, down. Sure, for a bullet hell type of arcade shooter, this is somewhat the norm, but when your shooting mechanic is based on inconsistent music, then it quickly tests one’s patience. There were far too many times where I unfairly died or lost a crucial amount of health because of the small area space and ricocheting blasts. 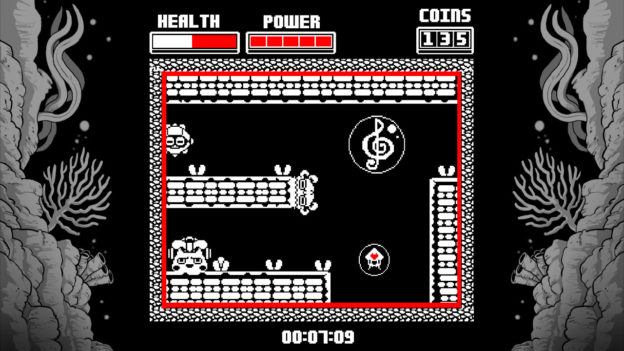 With the small size of each square room and your own shooting being determined by the game’s music, there are fleeting moments where you need to decide which enemies to prioritize. It’s almost like a simple puzzle in which you are choosing which enemy order is the best to minimize damage to your squid friend’s health. When a room is cleared of enemies, the shooting immediately stops until you acquire the Siren Song again. This brief break allows you the opportunity to collect coins from defeated enemies. The coins you collect can be used to purchase items for better health, shields, and other helpful items. But, every time you die, a certain amount of coins are subtracted, so collecting them is key to avoid being booted to the beginning stage of a set of levels. If you feel that enemies aren’t dropping enough loot, then you can use bombs that automatically turn every projectile into coins for easy pickings. This option alone made dealing with the few, but fun boss battles less of a struggle when I was ever down to my last bit of health. While the many pixelated sea creatures come in different shapes, sizes, and difficulties, I found the boss battles were far better suited to the game’s beat shooting mechanic. 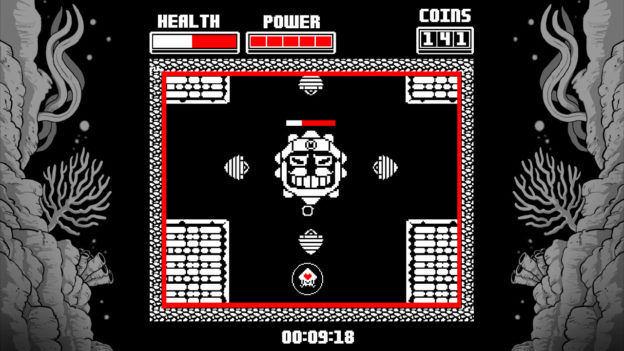 In terms of music and visuals, Radio Squid is rather catchy and surprisingly easy on the eyes, respectively. The monochrome look fits well with the cutesy pixelated deep sea world, and the chiptune beats (while still not feeling in sync with the shooting aspects occasionally) does have some tracks that are worth a listen or two. Although, even with a decent retro look, fun music, and periodic moments of challenges with various boss fights, Radio Squid is incredibly underwhelming. Clocking at under two hours to finish, it’s a quick breeze, but there’s not much reason to go back on a second playthrough unless you want a better completion record. While Radio Squid’s main beat-based shooting hook is interesting lined up among other arcade-y titles, it just overall lacks both polish and refinement.

Radio Squid has varying moments of charm with its monochrome look and fun chiptune soundtrack. But, sadly, it falls short due to a beat-based shooting mechanic that continually works against you and feels half-baked.