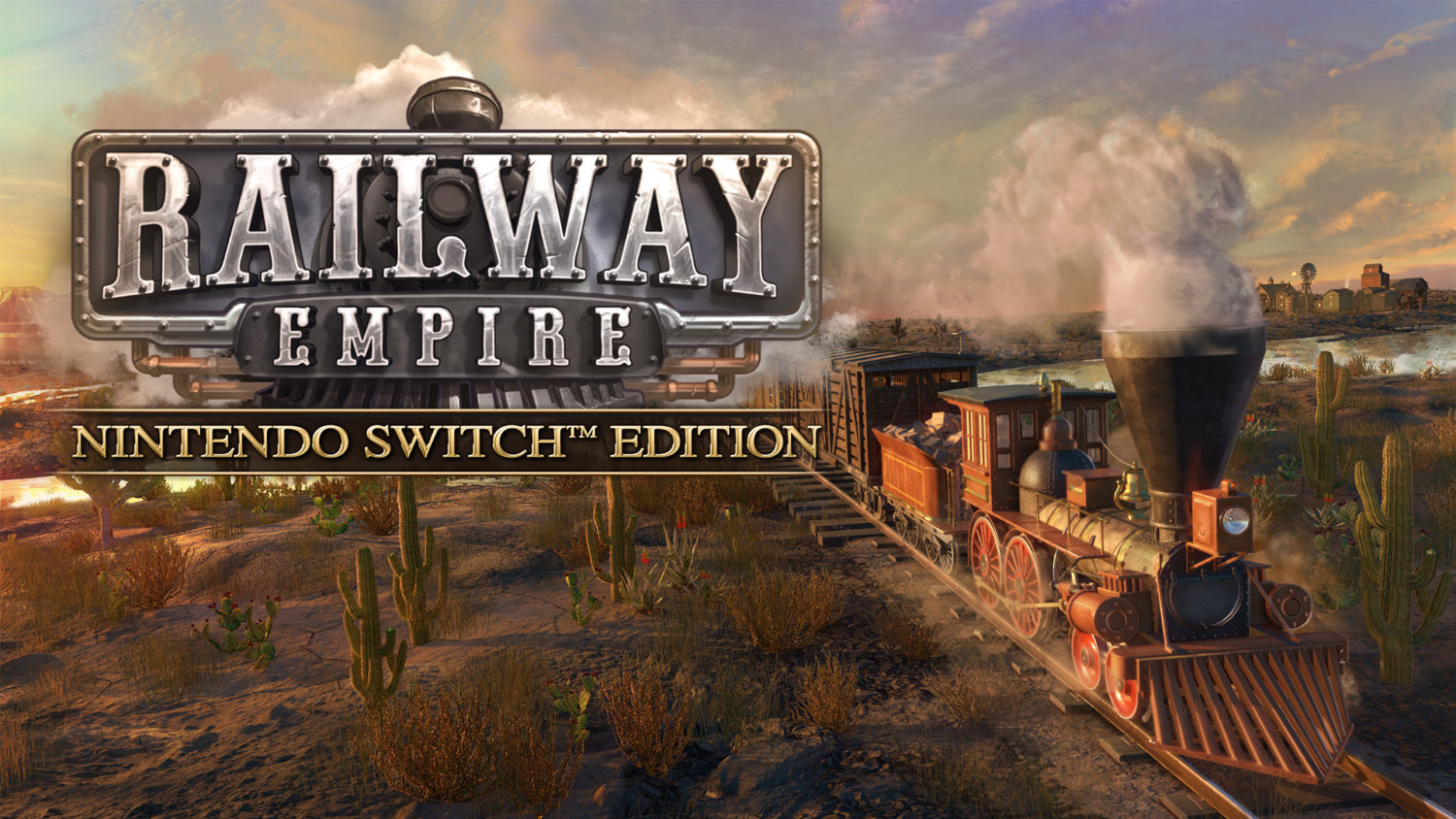 "Everybody loves the sound of a train in the distance."

Railway Empire for Nintendo Switch has little interest in whether you want to play it. That’s kind of a shame, because the basis for a good sim/management game is here. I just get the feeling it was developed by train aficionados who don’t want you in their club unless you’re perfectly in sync with their rules.

As you’d expect from the title, Railway Empire is centered around the creation and expansion of the rail industry in the 1900s. 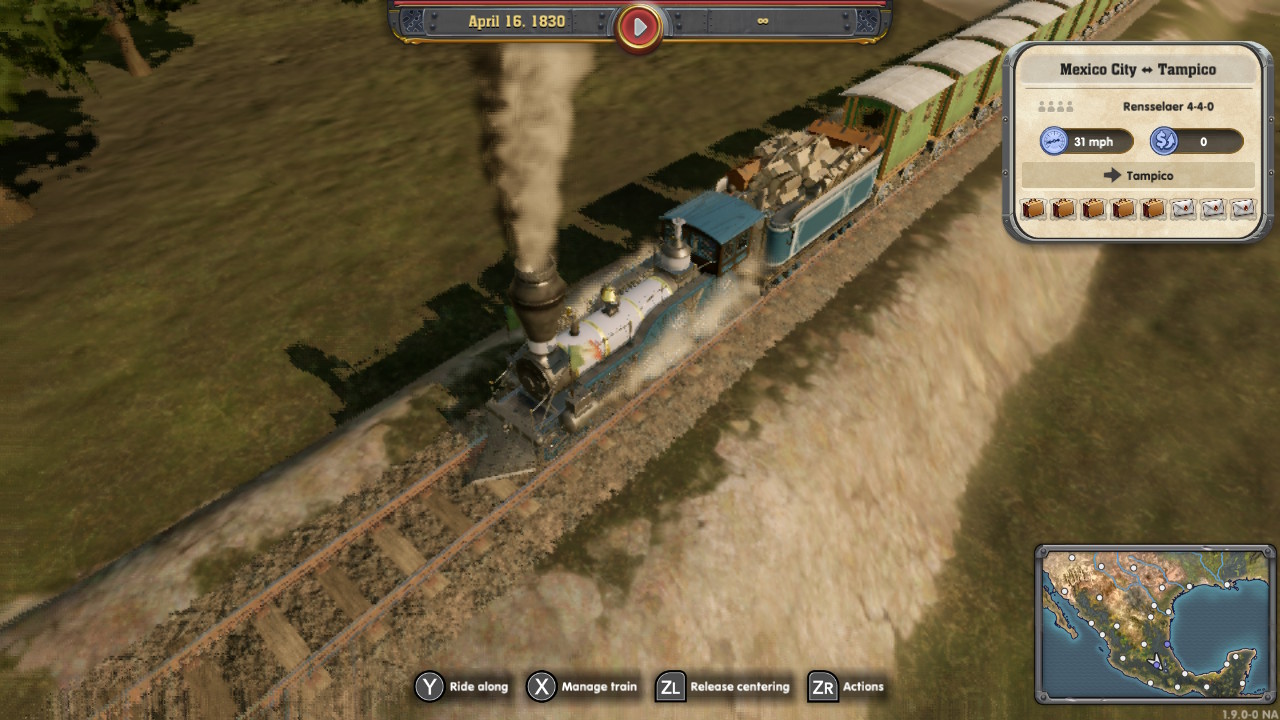 It’s a big game, made bigger for Switch by the inclusion of the Mexico, Great Lakes, and Crossing the Andes map and scenario DLC. As such, you’re required to not only learn a lot about the technology of trains and the strategies needed to get railways running efficiently, but also about big business. It’s a lot to handle, and the degree of difficulty is made worse by the details—the details you’re expected to manage and the details that are missed by the tutorials.

Of course, fans of Railway Empire on the PC (or of Railroad Tycoon from back in the day) expect this. They want it, as mastering the technology and the business elements—and conquering the competition with locomotion—are the game’s attraction. It’s therefore not entirely fair to punish Railway Empire for being exactly what it wants to be, even if it will alienate a good number of players.

Railway Empire does offer multiple ways to play it, but before I dug into any of those, I had to first wrestle with the tutorial. And I do mean wrestle. The player is provided with video instruction on how to lay track to connect cities and industries, set up signals, build/upgrade structures, and such, but little of it is explained well from a UI standpoint. Kalypso has done well to move the point-and-click interface from the PC version to a radial menu for your Joy-Con, but the button selection is clumsy. Even backing out of a technology tree is confusing. Navigating through menus to select a building, move the building to where you want it, spin the building to the preferred direction, then actually setting it down is immediately frustrating; not a good way to start a game.

And although laying down track is handled well, it’s more difficult to customize. As you drag a line of track between two points, the game does a decent job of helping you navigate terrain elements. It’s not always the most cost-effective method of getting trains from point A to point B, however, and it’s not easy to go back in and edit your line. 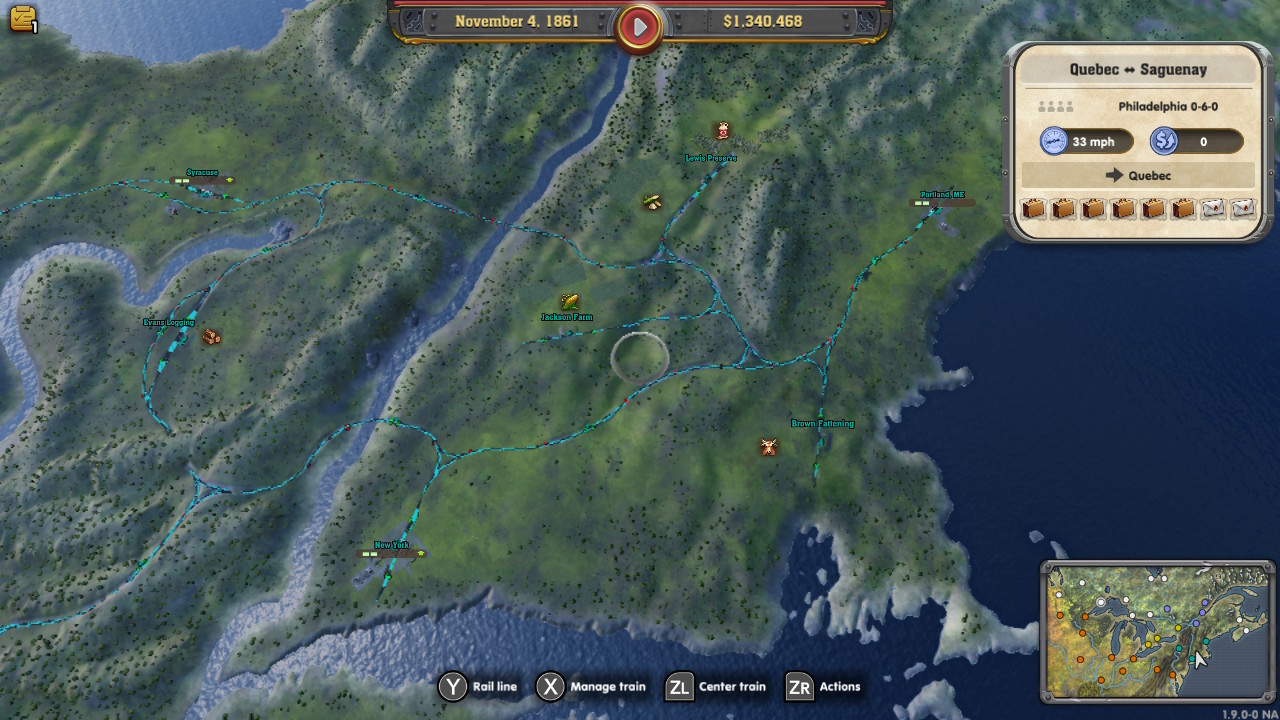 Even elements such as setting up signals that prevent congestion are unwieldy. A task as basic and important as this should be automated, at least to the point where if I place a signal at a certain location the game can figure out how to best optimize that route. Curiously, Kalypso does offer a mode where you can bypass the need for items such as signals by allowing the trains to pass right through each other on a single track. A middle ground being annoying and impossible would’ve sufficed.

When it comes to selecting goods and constructing buildings, the interface doesn’t get much friendlier. Goods are represented by tiny icons that aren’t always clear and are difficult to discern when playing in handheld mode. 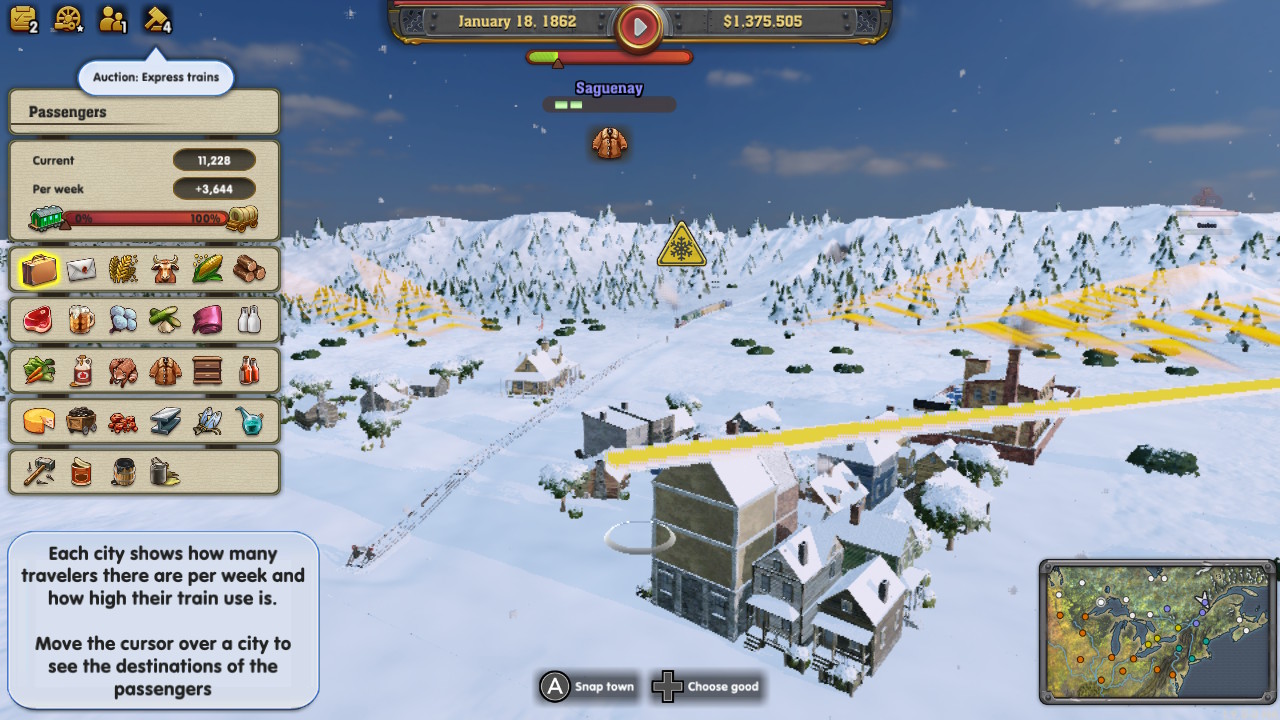 It’s important to have the right train for the right cargo, however (you have access to over 40 throughout the years), as moving people quickly from one place to another has a different set of requirements than hauling a lot of heavy goods that don’t need to be transported so quickly. The terrain comes into effect, too, as hilly and mountainous regions are obviously going to need powerful trains that can handle the inclines. You can upgrade your trains accordingly, either by researching technology or by purchasing new ones, and you’re also going to need to hire and manage staff to keep the whole operation running. You may not always have the funds to get the best setup at the start, so compromising early can be a sound business strategy. 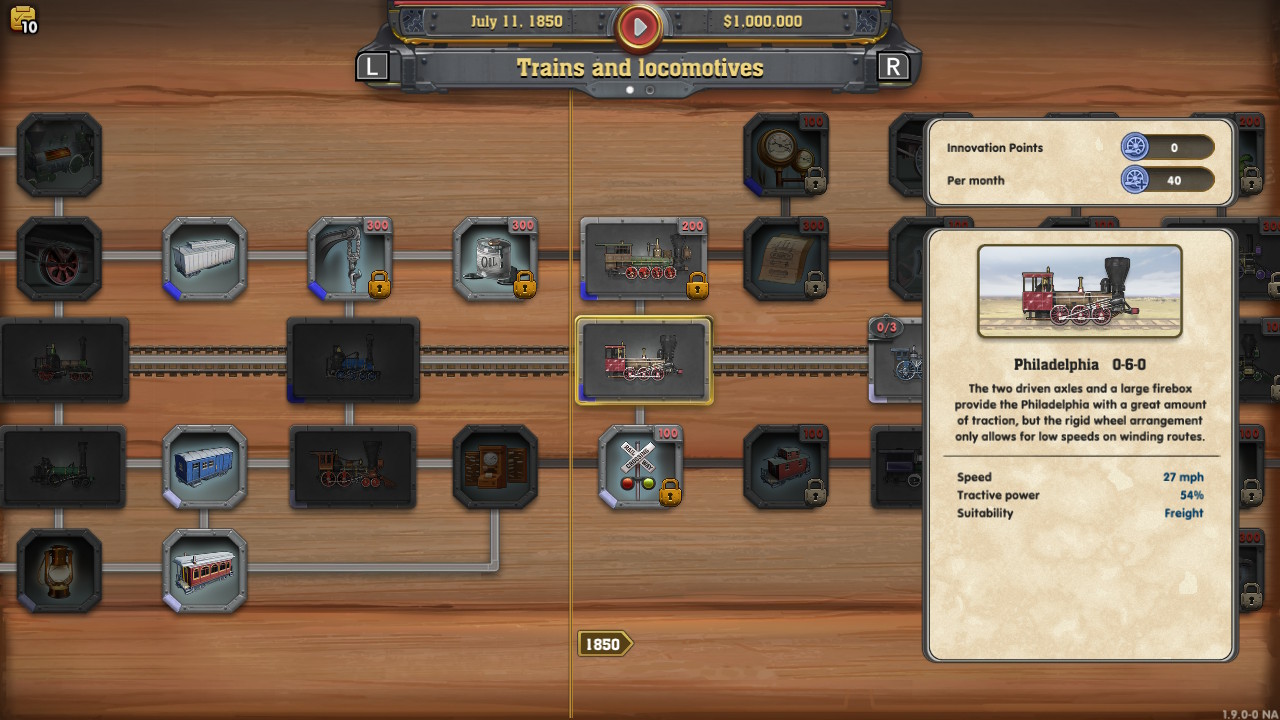 Of course, there is competition. You’ll be competing against other railroad barons looking to connect towns and provide services faster than you. I like the history of this, as the game uses real-life scenarios, but the competition is fierce. You’re going to find yourself behind early if you don’t have a grasp of the game’s UI and strategy requirements, and catching up is often an exercise in frustration as you keep going to back to optimize lines that should’ve been easier to configure from the start.

Railway Empire does have a sandbox that allows you to toy around with routes and connections without the pressure of competition. I often played in this mode early in the review process, as it helped me to get used to the Ui and non-intuitive controls, and to help me get tight with the basics.

The thing about Railway Empire, however, is that once you do get up to speed and lock into the game’s flow, it connects. The sandbox mode becomes kind of boring because you want the defined goals and competition. You want to create massive stations and switching depots to handle your ever-chugging system. You want to deal with saboteurs because they add some much-needed spice to the proceedings. You also realize that sabotaging the competition is somewhat fun. There was never a point during the review process when I felt I was fully in command of what I was doing, but with the help of online guides and walkthroughs, I was able to keep my railway moving with only the occasional embarrassing gaffe.

So, this has been a somewhat negative review of a game that can be rewarding if you’re willing to (sorry) steam your way through it. This was done purposely, as I want to hammer home that you really need to invest a lot of time to get to the point where it’s fun. I don’t mind that some of this comes from the complexities of managing a massive network of trains and cities. That’s what the game is. I do mind that too much of it comes from poor UI, lack of integrated instruction, and gameplay elements that are more difficult than they need to be.

The game could also look better. Although it’s fun to zoom in or ride along with your trains from time to time, the scenery does not inspire. 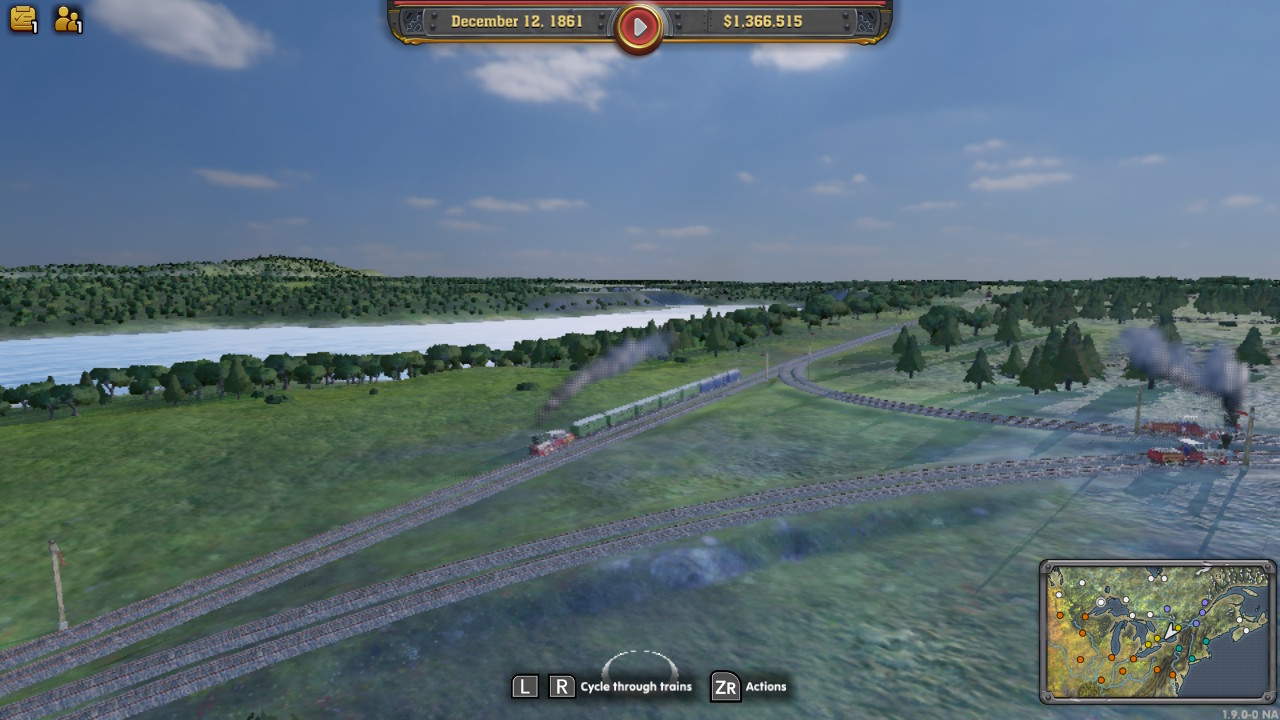 In other words, if you’re considering Railway Empire because you love the sound of a train in the distance, you’re not likely to enjoy the game. This is a management seem that digs deeply into the technology, the business strategy, and the economic acumen required to tame America’s landscape and reach the pinnacle of what this nation’s all about: corporate power.