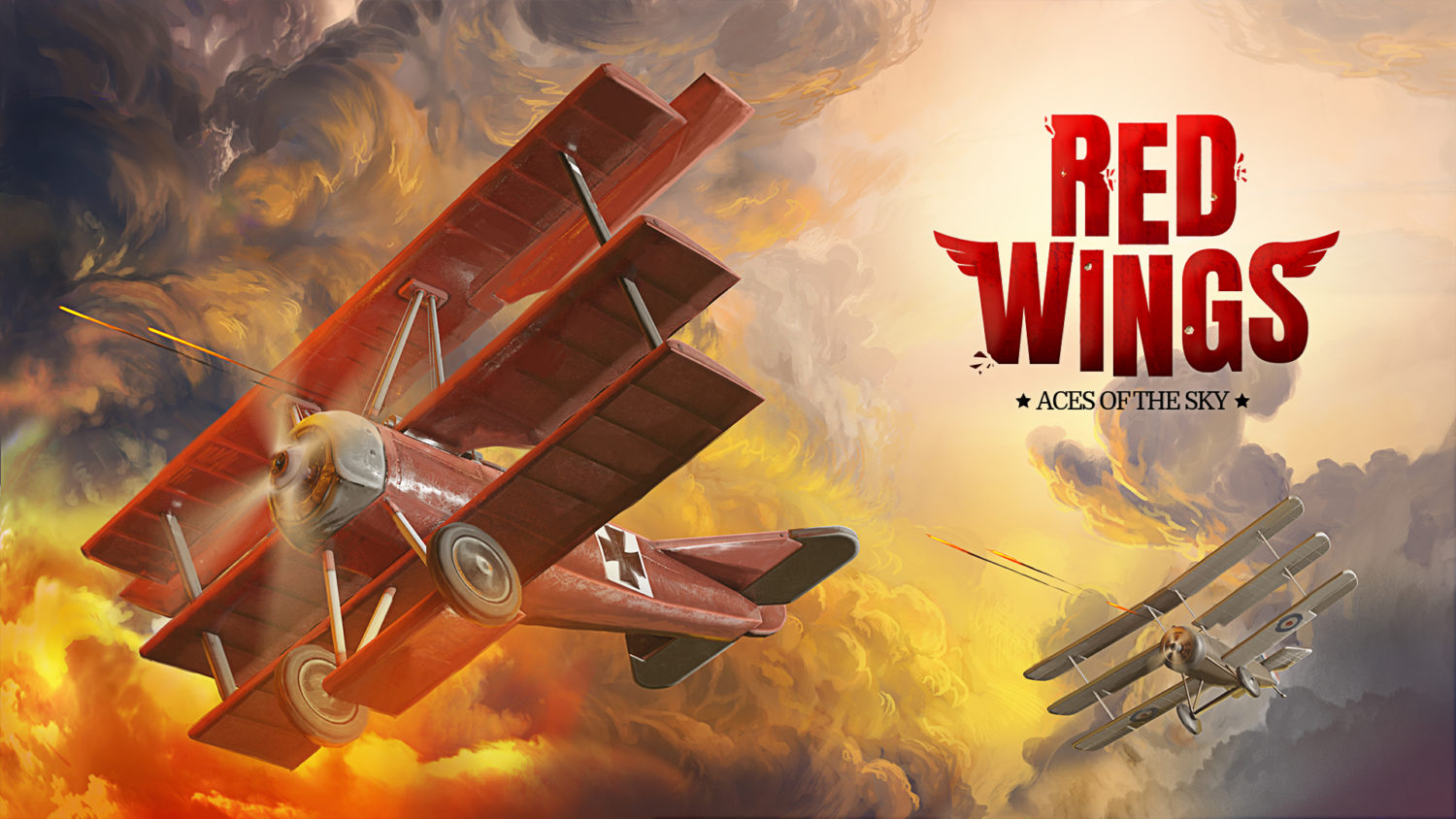 I once read that when WWI fighter pilots got shot down in enemy territory, they were treated like celebrities. It had something to do with the camaraderie that even the opposing side shared with those willing to place themselves thousands of feet in the air just to get shot at. It’s the kind of thing that makes you realize just how moronic war is.

Red Wings takes us back to WWI in which you either play alongside the Red Baron or as a guy looking to finally end his spree. No matter which side you choose, you’re neither the good guy nor the bad guy; you’re just a pilot in a squadron fulfilling your duties. 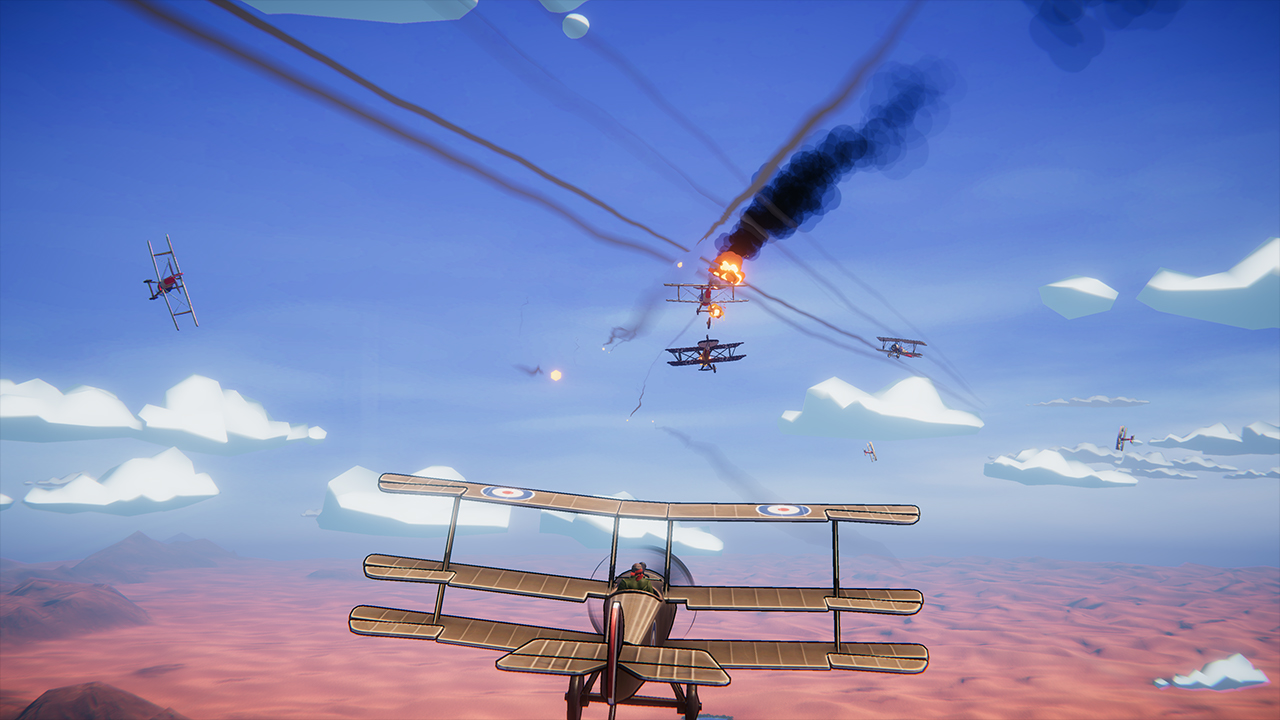 Although there are stories to drive both sides along, the narratives never branch out to cover the war and the politics behind it. The historical tidbits provided focus mainly on the airplanes and the lives of the men who flew them.

After you’ve chosen your alliance, you can hop into a tutorial, which I do recommend. Flying the planes in Red Wings is fairly simple, but some of the arcade elements do need explaining. You control your plane solely with the left stick (no rudders to worry about). The right stick is used for the throttle (slower flying means tighter turns and less fuel consumption, but you’re an easier target). You fire your guns with the ZR button, and you can zoom in on the action with the ZL button. It’s all very accessible, although I’m so used to manual rudder control that I found myself instinctively moving the right stick in turns for no reason.

Where it gets interesting is with the XYAB buttons, each of which has a special feature: barrel roll, fast turn-around, squadron support, and fast kill. Barrel rolls are useful for avoiding fire and just showing off, and the fast turn-around is a great way to position yourself behind planes that just shot past you. Calling in squadron support sends one or more planes (depending upon the skill tree, which I’ll get to in a bit) after whatever you’re targeting. 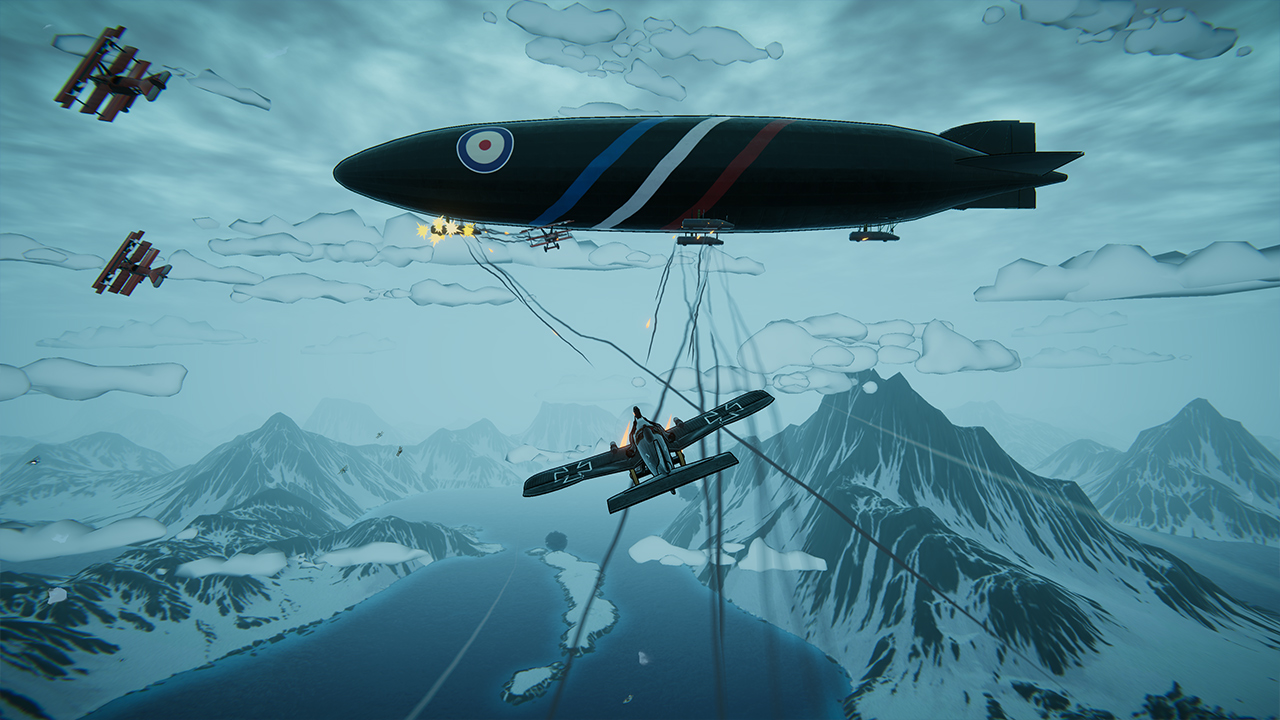 Fast kill is a somewhat disturbing way to finish off an enemy, as activating it switches to an animation in which you pull out a pistol and shoot the opposing pilot in the back. I know this happened (original fighter planes in WWI had no mounted machine guns, the pilots just shot at each other with handguns), but it still felt oddly brutal in Red Wings. Each of these special features has a cooldown period, so you can’t perform barrel rolls ad nauseam.

You’ll use these abilities across numerous missions that start with you in the air and end with you in the air…or dead. No takeoffs or landing here. You’ll have tasks such as taking out an enemy squadron, taking out enemy balloons, protecting your balloons, etc. There’s not much variety in actual combat, but gameplay is broken up by the occasional bomber level and by fuel runs in which you have to fly through a path of rings to replenish fuel before it runs out. 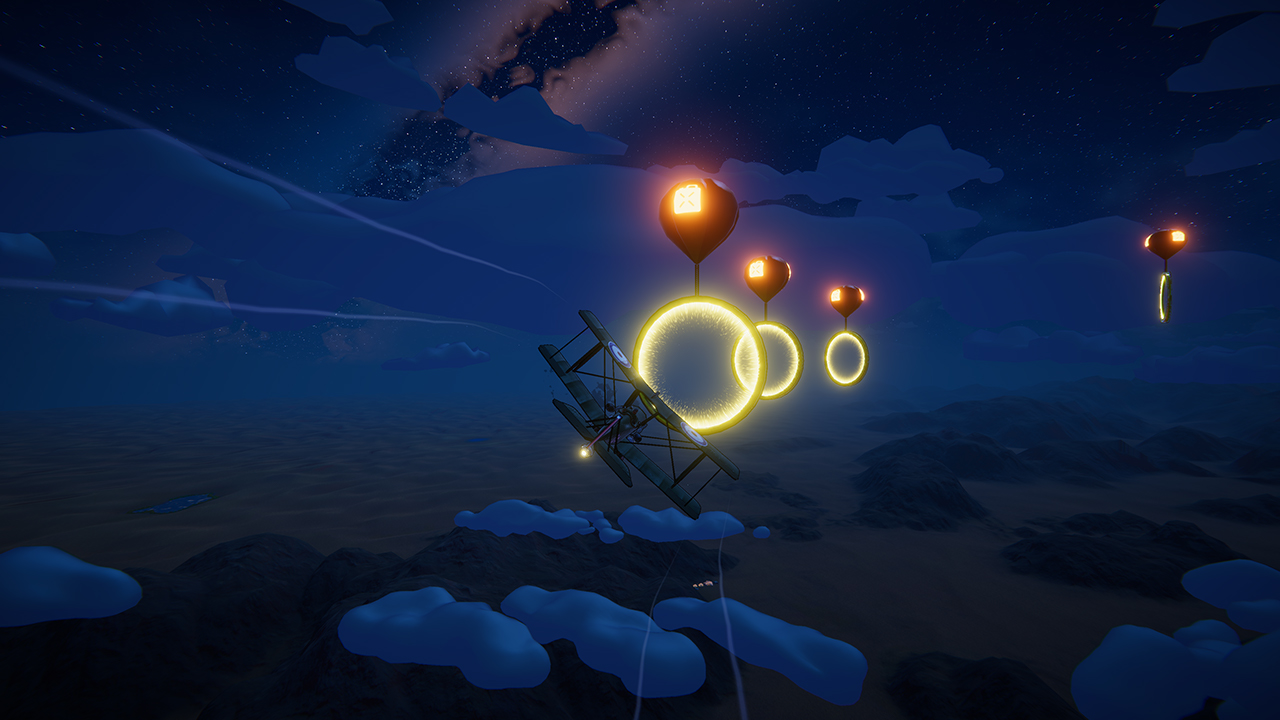 Bomber levels, by the way, switch to a top-down view of your plane as you avoid flack while trying to line up your bombing runs. 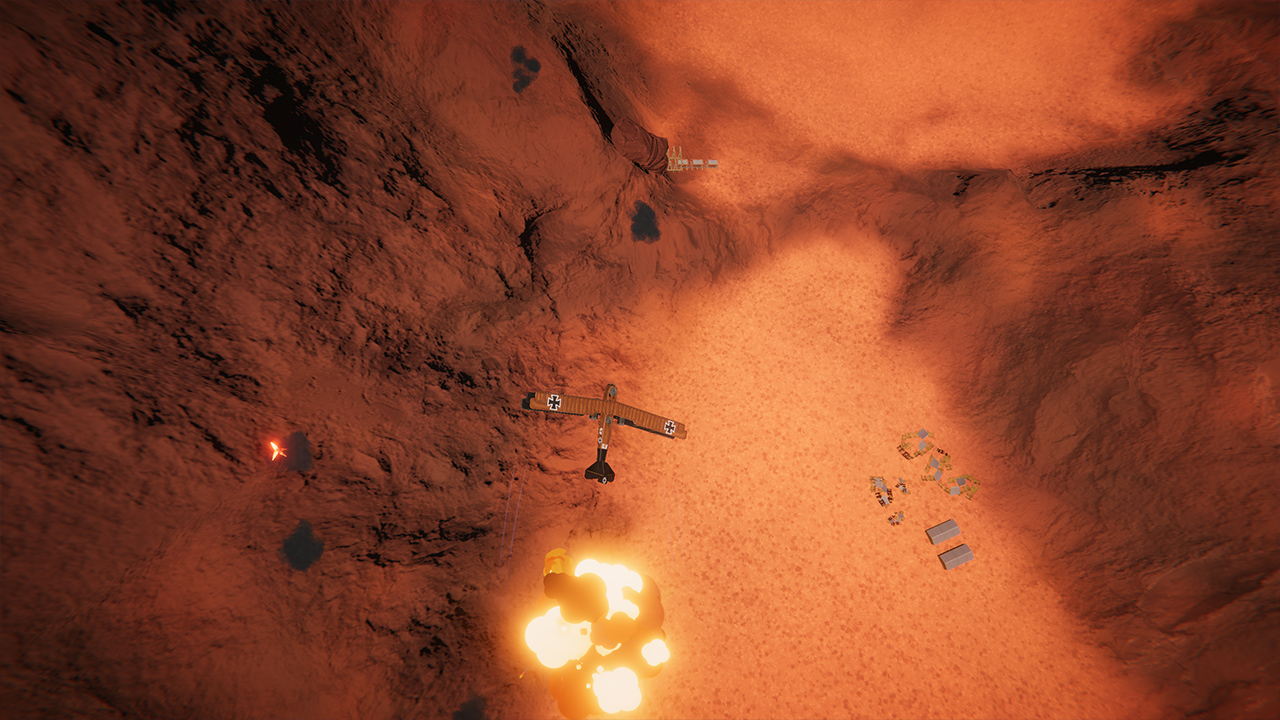 Speaking of the rings, they appear in your combat missions, too. You take damage from enemy bullets and from smashing into enemy planes—which I tended to do a disturbing amount of times. Too much damage and you die, of course, but flying through one of these rings completely repairs your plane and refuels it, to boot.

The combat action in Red Wings: Aces of the Sky is top-notch. Controls are tight, the comic book-style graphics are wonderfully colorful and fun to see, and there’s a surprising amount of strategy involved in these ten-minute blasts of intense combat. But there’s also a problem.

At the end of each mission, you’re awarded anywhere from zero to three stars based on your performance. These stars can be used to upgrade your plane in numerous categories (better weapons, faster skill cooldown times, etc.). That’s fine, except the stars are very hard to get. You’ll definitely need an upgraded plane to get them on the later missions, but you can’t upgrade your plane without getting stars. See the issue? Replaying earlier missions doesn’t give you those stars again, so you have to play levels over and over and over again until you figure out how to maximize your efficiency.

Or you can find a friend. Red Wings: Aces of the Sky allows for split-screen co-op multiplayer. Considering that most star rewards are time-based, it’s much easier to earn them when you’ve got two pilots working together. 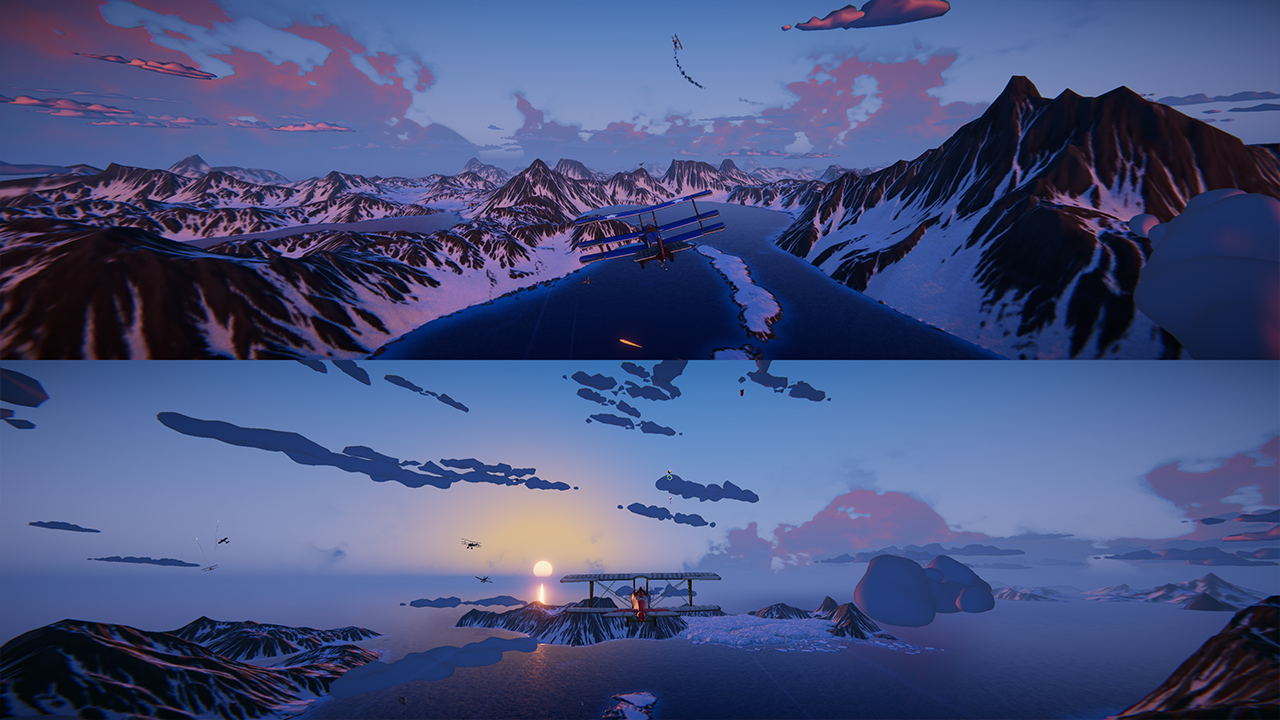 You can also improve your skills in Survival Mode, an option that also increases the game’s lifespan once you’ve completed the story.

Red Wings: Aces of the Sky will take over your gaming time when you first play it, but the repetitiveness of the missions and the frustration with earning plane upgrades starts to set in pretty quickly. Still, it looks great and plays wonderfully throughout, and is sure to satisfy the often unscratched itch of aerial combat gameplay for Switch owners.

Aces of the Sky immediately hits you with frenzied, stylized, WWI-era aerial combat, then does little to change the formula throughout its two stories. Whether you can deal with the repetitiveness depends upon how much of an arcade gamer you (and hopefully a nearby squad mate) really are.

Nintendo Switch All in! Games red wings aces of the sky