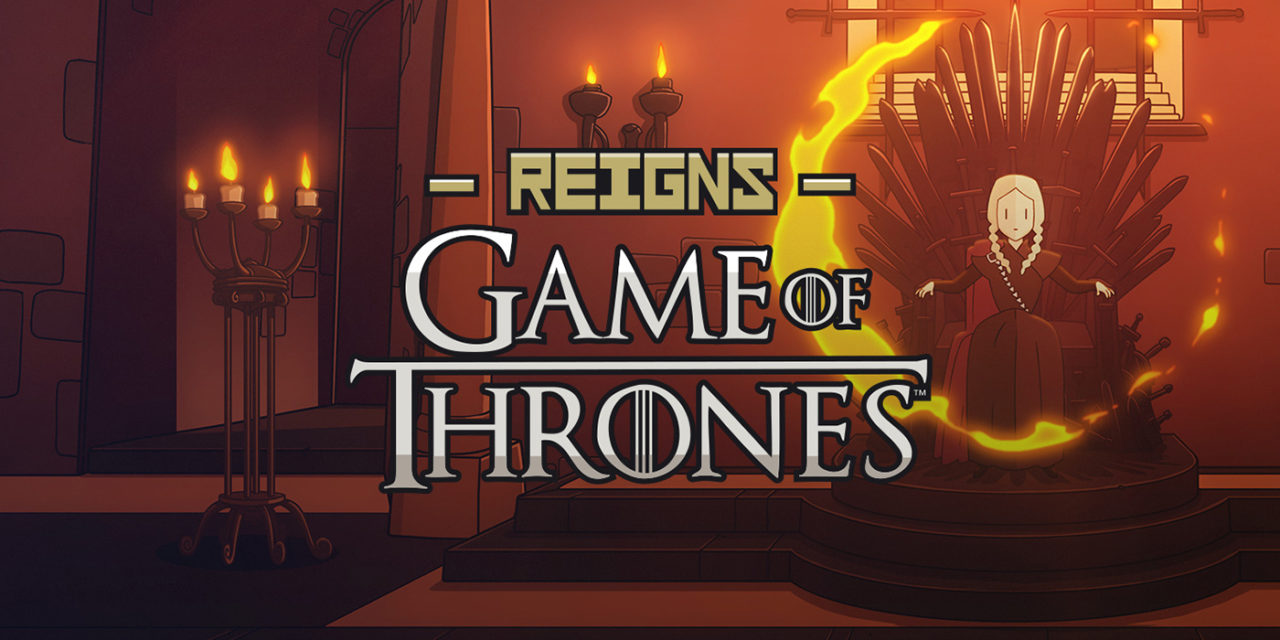 Here, take the Reigns, but be warned – it probably won’t last long. If you are interested in playing Reigns: Game of Thrones and you don’t have any background with the books or the show then this game will not make much sense. If you do know about the show and the major players you can have some fun being in charge. 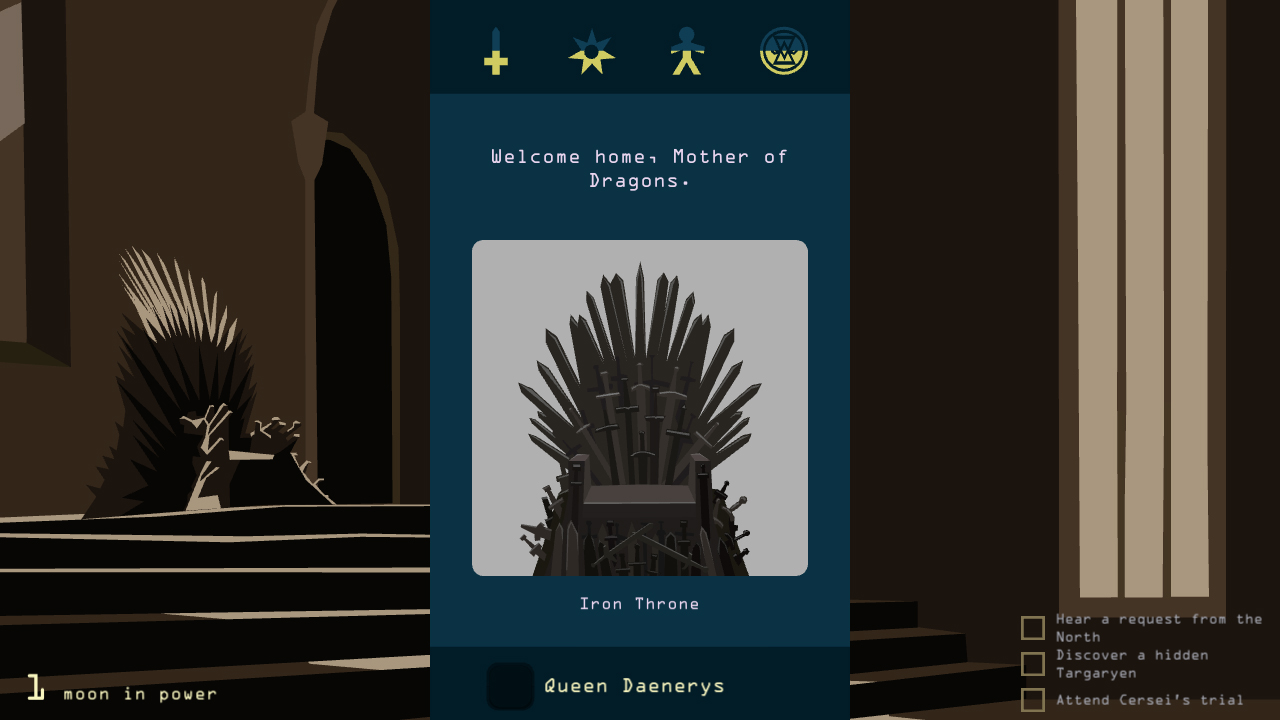 Gameplay is based on a “randomized” deck of cards. As each card is revealed you are given a situation and a choice. With each decision you will either gain or lose points in one or more of four categories: military, faith, popular opinion, and gold. If anyone of these reaches zero some portion of the kingdom will rise up and kill you (and in some nasty ways). Don’t fly too high, either; if any of the four stats gets completely full then that segment of society will kill you in a takeover attempt – good times, right? As it is in real life, moderation and trying to keep things balanced is a good thing.

You get to play one of several rulers, including Daenerys, Tyrion, Jon, and Sansa. More of your favorites unlock as you progress in the game. Each ruler has traits particular to that person, like being able to command a dragon (wink wink). Factions like the Iron Bank and The Seven are also represented; and don’t forget everyone’s darlings, the White Walkers. If your decisions lead to a little winter and you let it go too far then the White Walkers will be sure to pay you a visit. Don’t fear too quickly when the snow flies (and you will see the snow on the game screen when Winterfell comes around) as you can manage your way out of it, but you will need to be extra careful. How you treat your courtesans and handle situations looks a bit like real life, but the people in your kingdom will only put up with unpleasantness for so long before they kill the regent (and they seem to like doing that a lot). 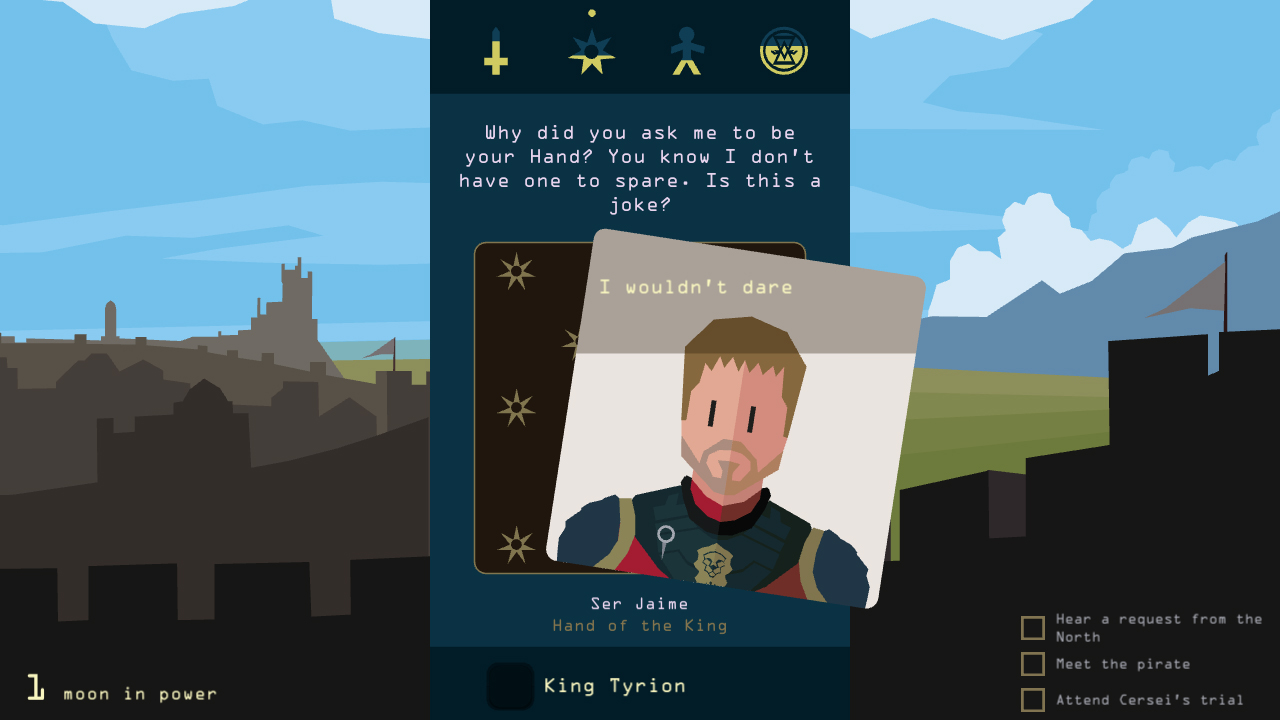 There is no real action other than picking one or two options on a card, so it’s more of a thinking game than an action game. Some of the thinking is actually undone by the random draw of the events in the deck of cards. OK, so it’s not totally random; the game does have goals for you like “meet the pirate”, but there is no knowing in advance what you will get and each decision affects subsequent play. Like the man said, “you must choose, but choose wisely…” There is no real dialogue, all the characters utter nonsense sounds which come off a bit like something I heard once in a cantina in Mos Eisley. Don’t worry; there’s on-screen text so you know what’s going on. 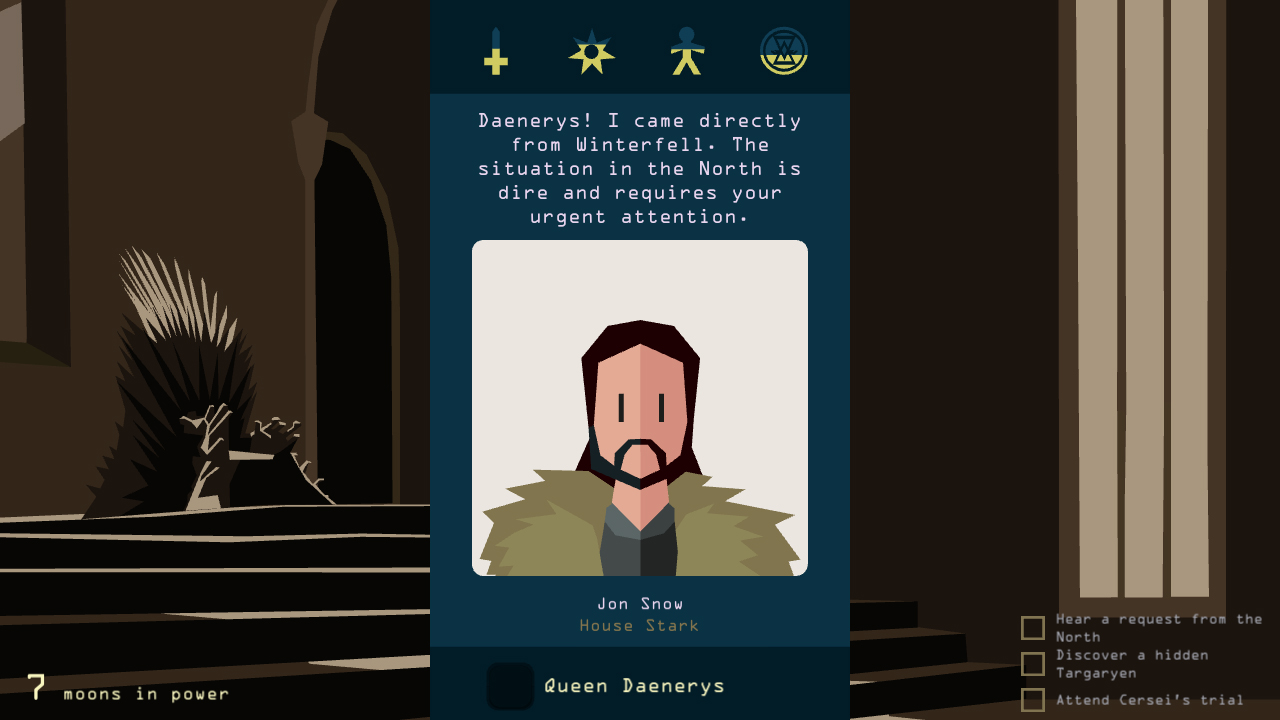 The graphics are as nondescript as the dialogue and it looks a bit like a comic strip, but given the nature of the game, it all works well enough. To actually play, use the left joystick to tip the card to the left or to the right to see your choices then press the A button when you see the choice you want to take. When you get to a point where your time is up, the choice will be the same either way you tip the card (it often just says “What?” as if it’s a real surprise) and then you’re dead. The game will then tell you how many moons that reign lasted and will show you a list of your longest three reigns.

The game is only fair. There is no real advantage to playing on the TV versus the Switch console as there is nothing special about the graphics or sounds that warrant the larger format. If you don’t know the show you probably won’t want to bother playing this one. If you do know the show, you can have a little fun running things and one-upping yourself to see how long you can reign. If you tire of beating yourself, there is a two-player mode so you can pummel an opponent. Even for fans of the show, this game is not exactly “exciting” (as mentioned, my coworker GoT fans gave it a lukewarm response).

I usually like puzzle games more than high-action games, but this one left me a bit flat. If you want to add an official GoT item to your game collection, this one is only $3.99; so no huge investment and you can while away some time as you wonder, “What if I sat on the throne?”