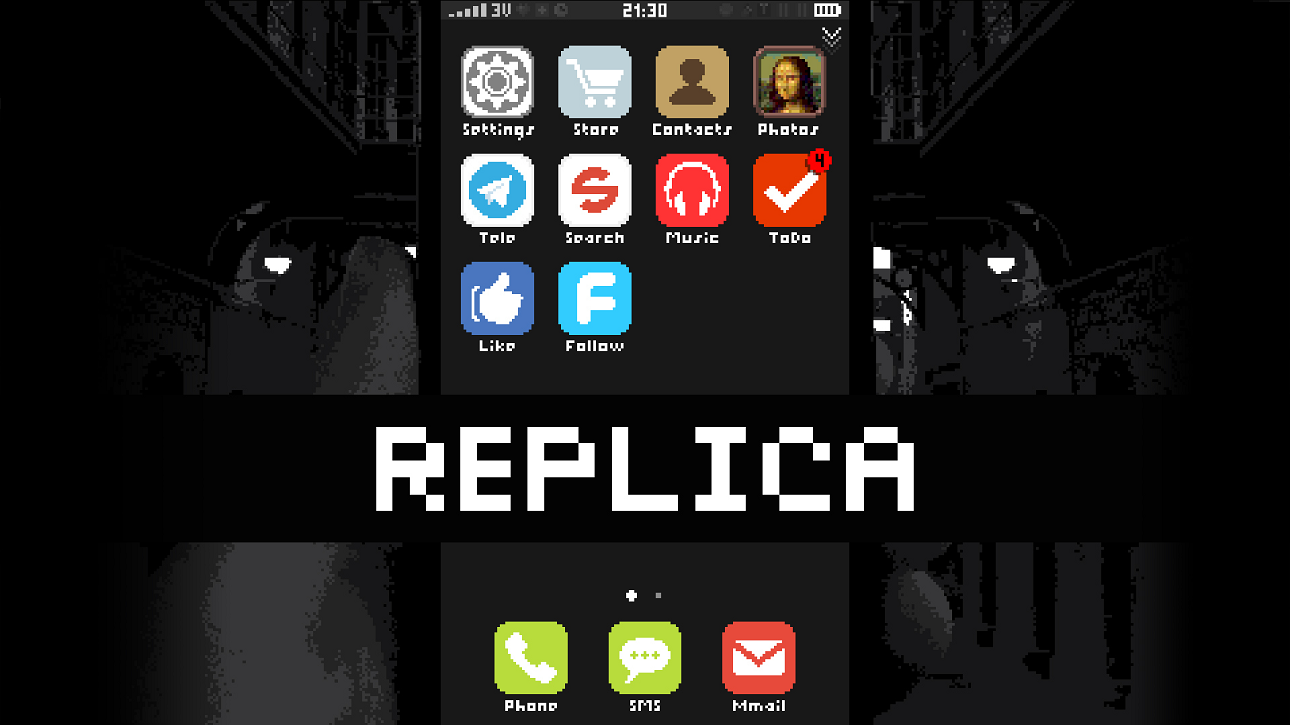 An awfully short adventure title, REPLICA tries to promote replay through its various endings. But after a few, I had seen enough to be satisfied. The game is modestly priced ($4.99), but you get what you pay for in this case; an average at best title, giving you 90 minutes of entertainment that you’ll soon forget.

Described as “an interactive novel game played through a cellphone and social media,” the game takes place entirely staring at a cell phone screen. While the cell phone is modern in design and function, the pixel imagery is circa 1989. I’d generally love that style, but it clashes badly, as some of the text is hard to read. It makes for a disjointed tone.

You play as a high schooler working for the government, for some odd reason. There’s little context at the start—the cell phone you have belonged to a suspected terrorist. Your first task is figuring out how to unlock the phone. Afterward, you’ll search his text messages, social media posts, etc., to find “evidence” supporting this. Attempting to crack this case has some real potential, but it’s tough to be too invested in what’s taking place without a frame of reference. It plays with real-life themes but puts them in a childish context.

Playing in handheld mode is far preferable to docked in this case, as you can use the Switch touch screen as you would an actual phone. The phone only takes up about a third of the screen, so there’s much wasted black and white real estate. Still, it’s quicker than dragging a slow icon across the television. The puzzles involving reading and clicking are okay, no more, no less. There’s nothing memorable standing out as a highlight.

The story is ripe for spoilers, and so short I feel anything could be considered such. I admit, one of the 10-plus endings had a thought-provoking twist, but the setup potential is mostly wasted on political characters I had virtually no interest in. An intriguing theme alone isn’t enough. I’d gladly take fewer endings in exchange for more characterization and coherence.

There’s not much to say about REPLICA. It plays closer to a proof of concept than a full-fledged game. It is only $4.99, but that might even be high for a game I beat (multiple times) in under two hours. It was painless, except for the pain that came from seeing potential unfulfilled. Maybe a sequel can make things better.

There’s not much to say about REPLICA. It plays closer to a proof of concept than a full-fledged game. It is only $4.99, but that might even be high for a game I beat (multiple times) in under two hours. It was painless, except for the pain that came from seeing potential unfulfilled. Maybe a sequel can make things better.