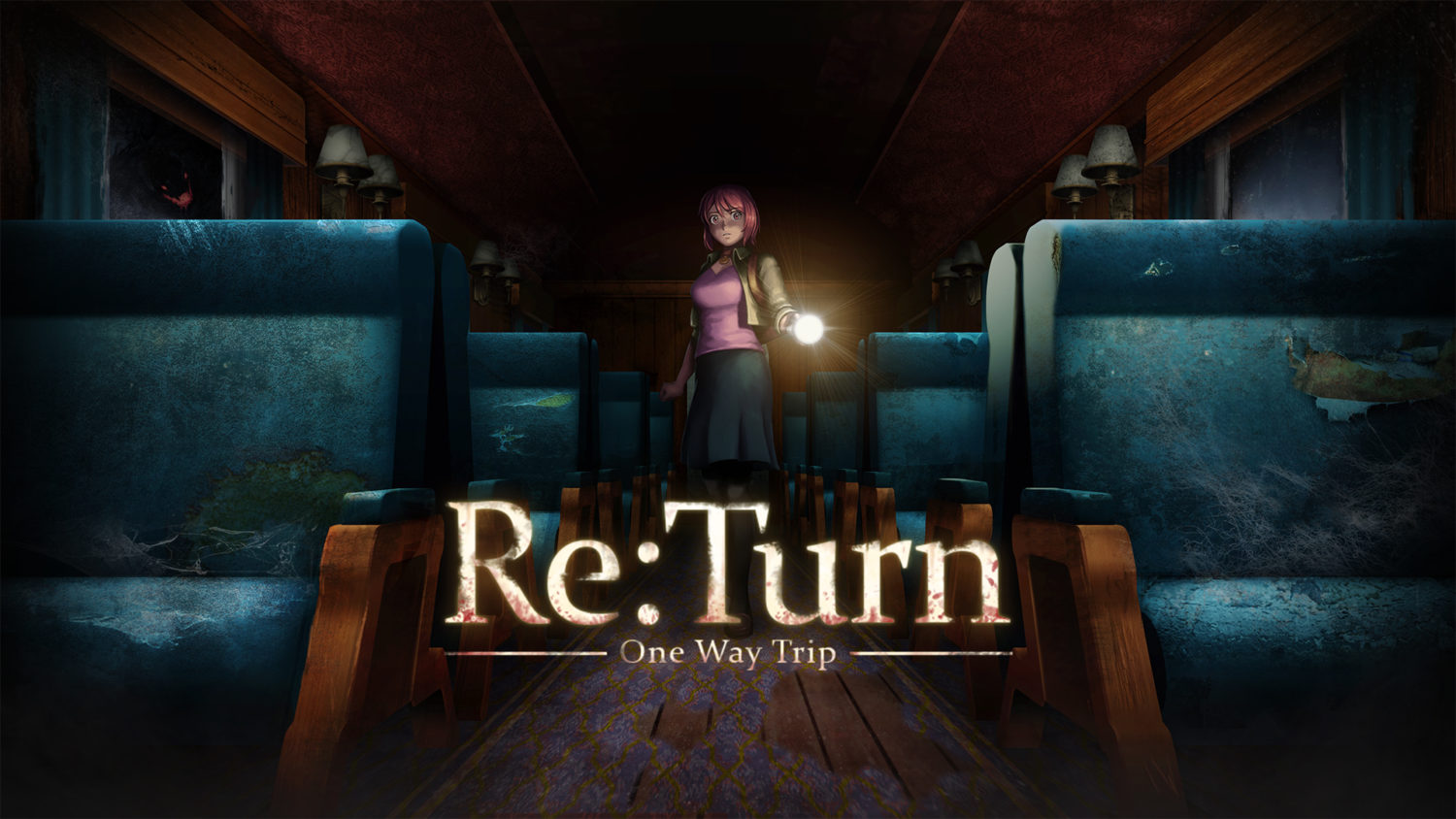 With stops in Newark, Elizabeth, Linden, Rahway, some kids' campsite, and hell.

Re:Turn – One Way Trip opens with your typical horror movie setup. Five college friends are on a post-graduation camping trip, enjoying the time they have left before heading out into adulthood. 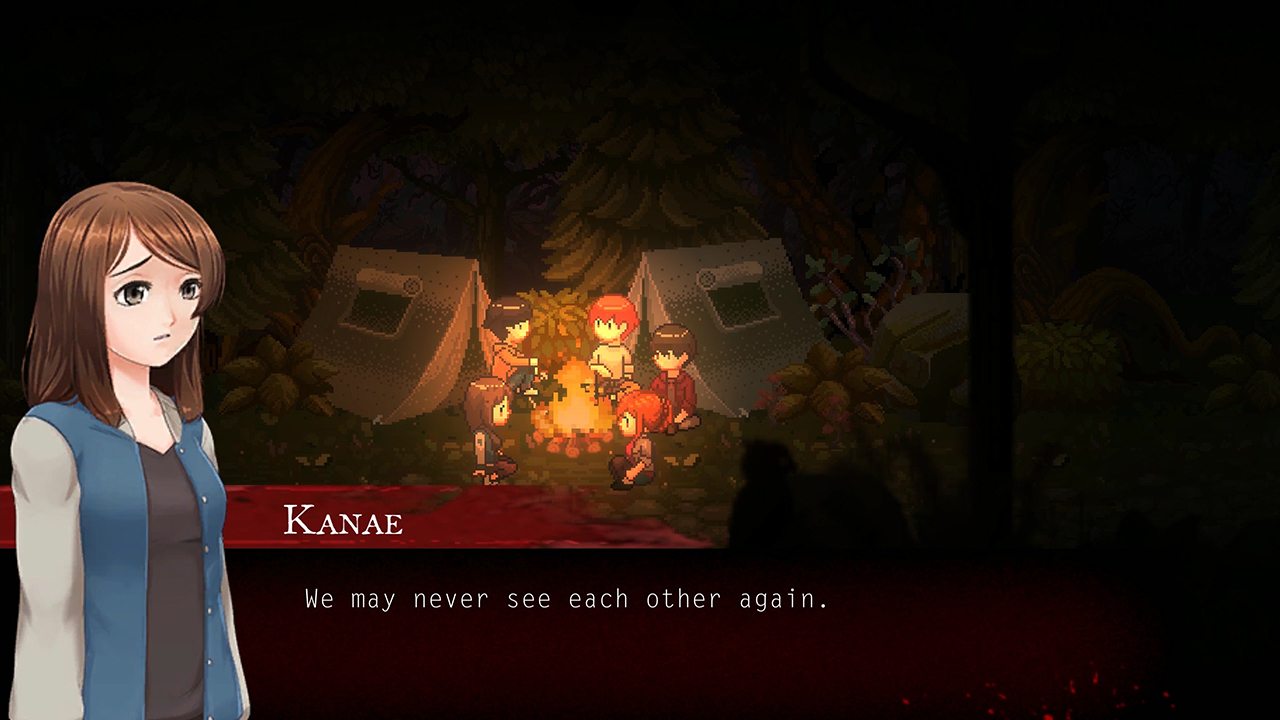 We learn that two of them—Sen and Saki—are engaged. So, when Saki finds a love haiku while searching for firewood after their campfire suddenly goes out, she assumes it’s from her fiance.

It’s not. An argument ensues. One of the characters runs off into the darkened woods alone. The others decide he’ll likely come back when he’s ready, so they go to sleep. Saki soon awakens to find herself alone at the camp. She heads out to search for her friends and stumbles upon a dilapidated passenger train.

In the middle of the woods.

With this typical horror movie setup, she makes a typical horror movie decision and explores the train in hopes of finding her friends. Throughout most of this game, then, you’ll be controlling Saki as she moves through the numerous train cars collecting clues and inventory items. Although it certainly has its horror elements, Re:Turn – One Way Trip is a puzzle/adventure game. 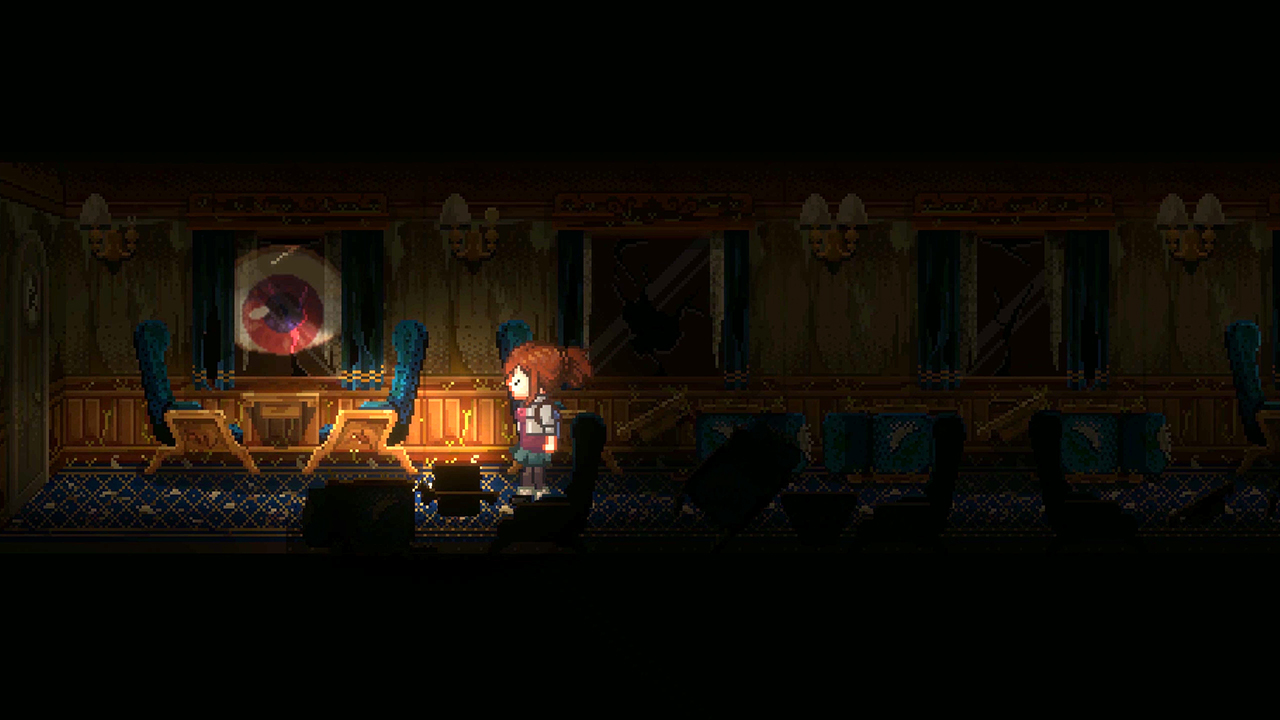 The story is split across two timelines. As Saki searches for her friends in the present, she’s often thrown into the past as a ghost where she experiences the doomed train’s final trip. Most of the passengers can’t see her or detect her presence, although she is able to manipulate various physical objects. Saki becomes caught up in her stories, believing that helping these people in the past will reveal what’s going on in the present.

Helping the characters in both timelines requires a lot of back-and-forth and light puzzle-solving. Some are simple, one-off affairs, such as guiding a ball through a maze or playing the right piano melody. Others involve the expected adventure game chain of events. Getting into certain rooms, for example, will require you to find an object to give to someone to get a piece of something to fix a device to pop open a drawer. This is an issue when back-and-forth exploration becomes the norm.

The puzzles are never terribly difficult to suss out, and even the ones that do stump you are quickly handled with trial and error (you rarely have more than half a dozen inventory items at a time). 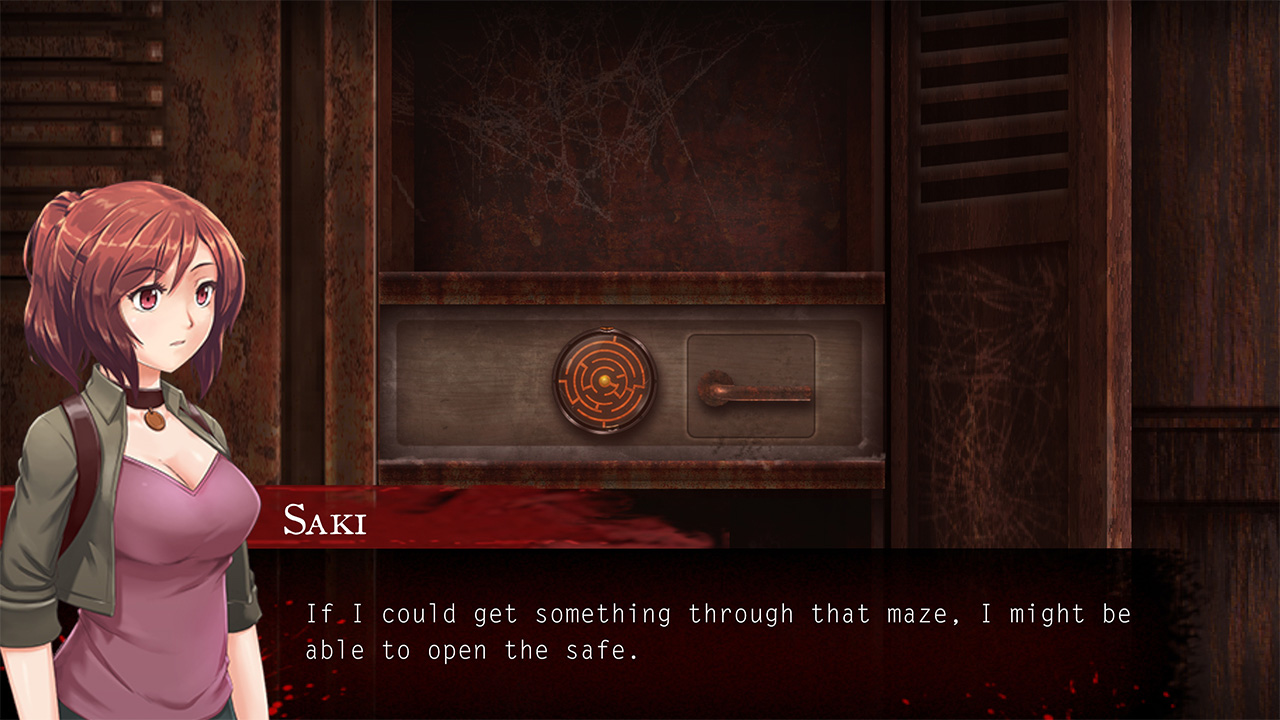 Accessing and using items is adeptly handled, and you’ll be happy about this because of all the walking around to find what you need and to get to where you need it. In one late puzzle, I needed a specific item to advance past some sort of monster. It took the first two items I tried, removing them permanently from my inventory. I had an idea of what to use next, but the game wouldn’t give it to me. I took what it did give me, and the monster stole that, too. Only then could I go back and get what I wanted, which actually worked. However, I did get a game achievement for exhausting all my possible actions, so good for me, I guess?

The main draw of Re:Turn – One Way Trip, then, is the story. With somewhat mundane and simple gameplay, the story has to carry you through. It does a pretty good job, providing tales of forbidden relationships, fragile family dynamics, unrequited love, and so on. Saki does her best to solve the problems of the past while discovering she never had a solid grasp of her own relationships, and this continues to propel her forward throughout both timelines. Can helping these “ghosts” prevent her and her friends from becoming the same? 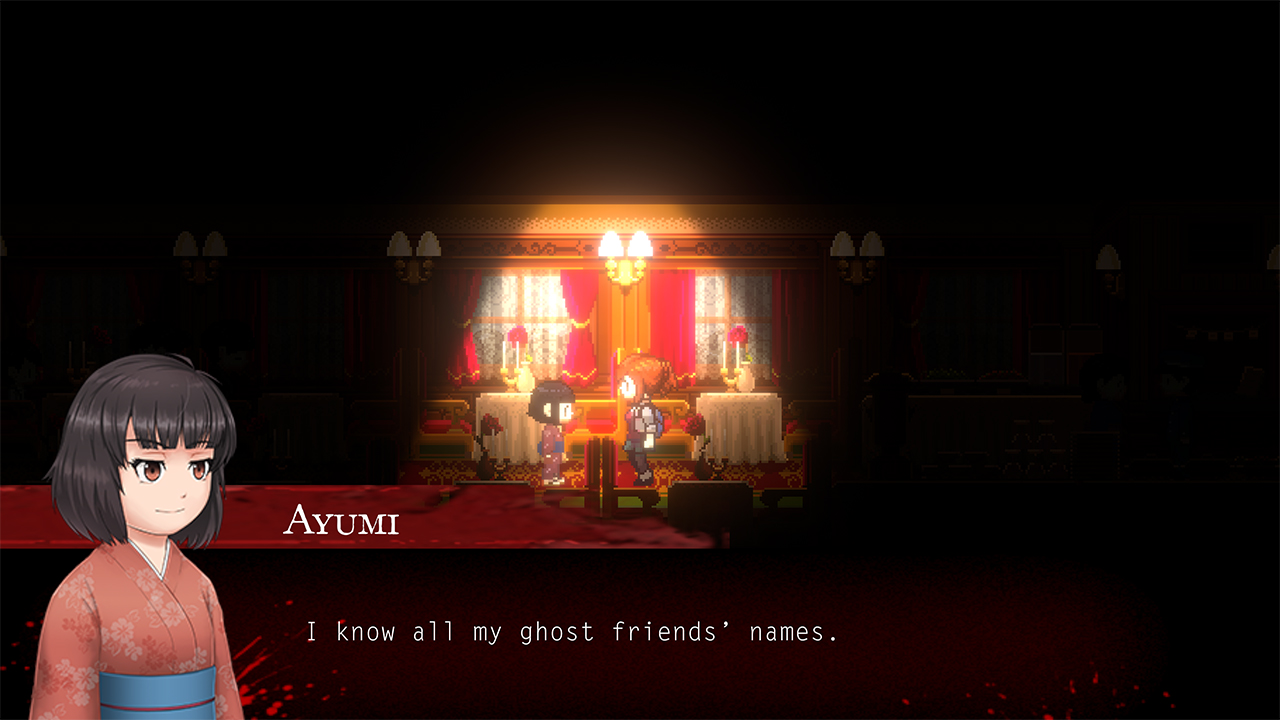 Not if the demons have anything to do with it, and there are a few. Especially in the back half of the game, various enemies pop up and give our hero(s) chase. Getting away from them simply involves running away, and one in particular was surprisingly difficult to pull off. I couldn’t start running quickly enough after the prompts ended, and died a half a dozen times. It was only when I switched from the L-stick to the D-pad that I was able to start running in time. Keep that in mind if you meet the same fate.

It’s also too bad that the game isn’t scarier. Re:Turn – One Way Trip tells you to play it in the dark with headphones on, largely because it relies on audio and jump scares. However, the controller vibration usually tipped off when a scare was about to come, so they were largely ineffective. And although the game makes creepy use of light and darkness, the pixel graphics are more charming than scary. Unless you really can’t handle banging doors and screaming ghosts, you won’t find the proceedings all that frightening. You’ll definitely want to take the game’s advice and play it in handheld mode with headphones on in the dark if you want to optimize its eerie effect. 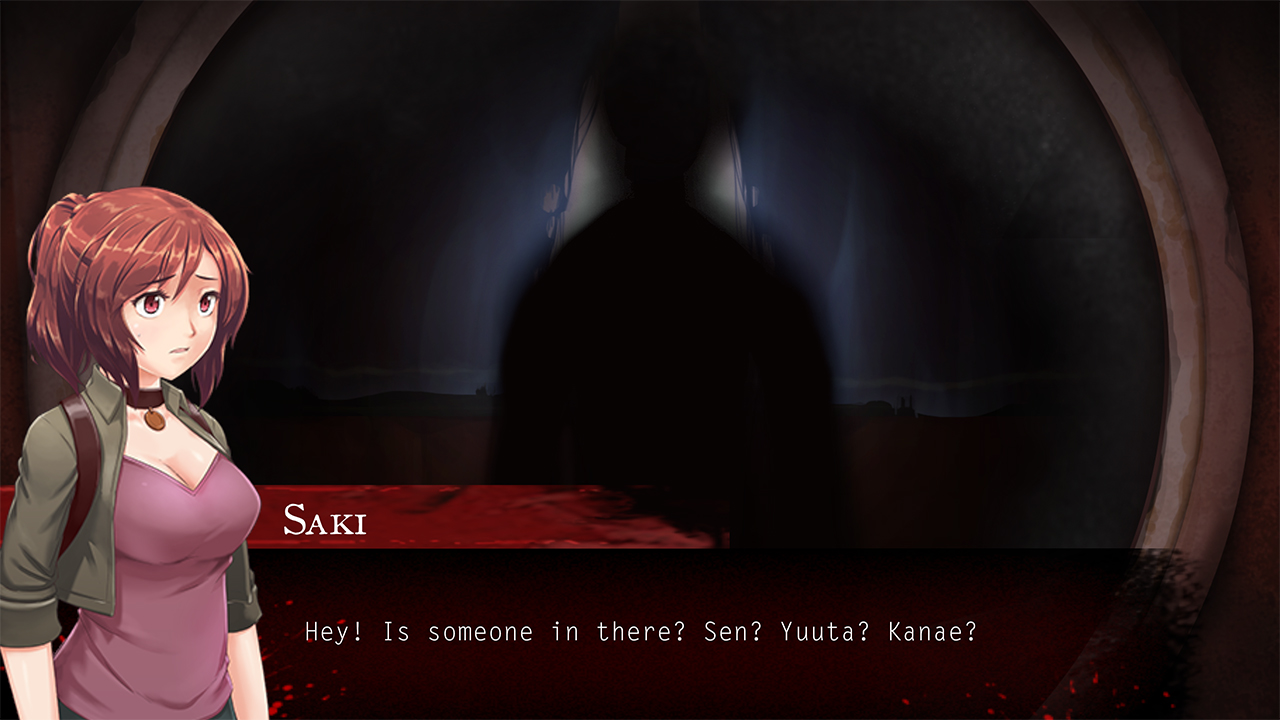 Still, I enjoyed my time with Re:Turn – One Way Trip. You can complete it under five hours, so it never wears out its welcome. The story also goes in a couple of directions you likely won’t expect, and the relationships between the characters are handled with more sympathy and intelligence than you normally get in horror stories. I remained vested in Saki and the train’s passengers throughout. And although a little more of a denouement would’ve been appreciated, the ending is handled with the same care as the rest of the game.

We can’t return from all the trips we take in life, but if we’re lucky, we’ll learn what we need to before we arrive.

Re:Turn – One Way Trip isn’t a terribly long or frightening excursion, but those seeking a good puzzle adventure with an emotionally-rich story and a take-charge female protagonist will be happy they bought the ticket.