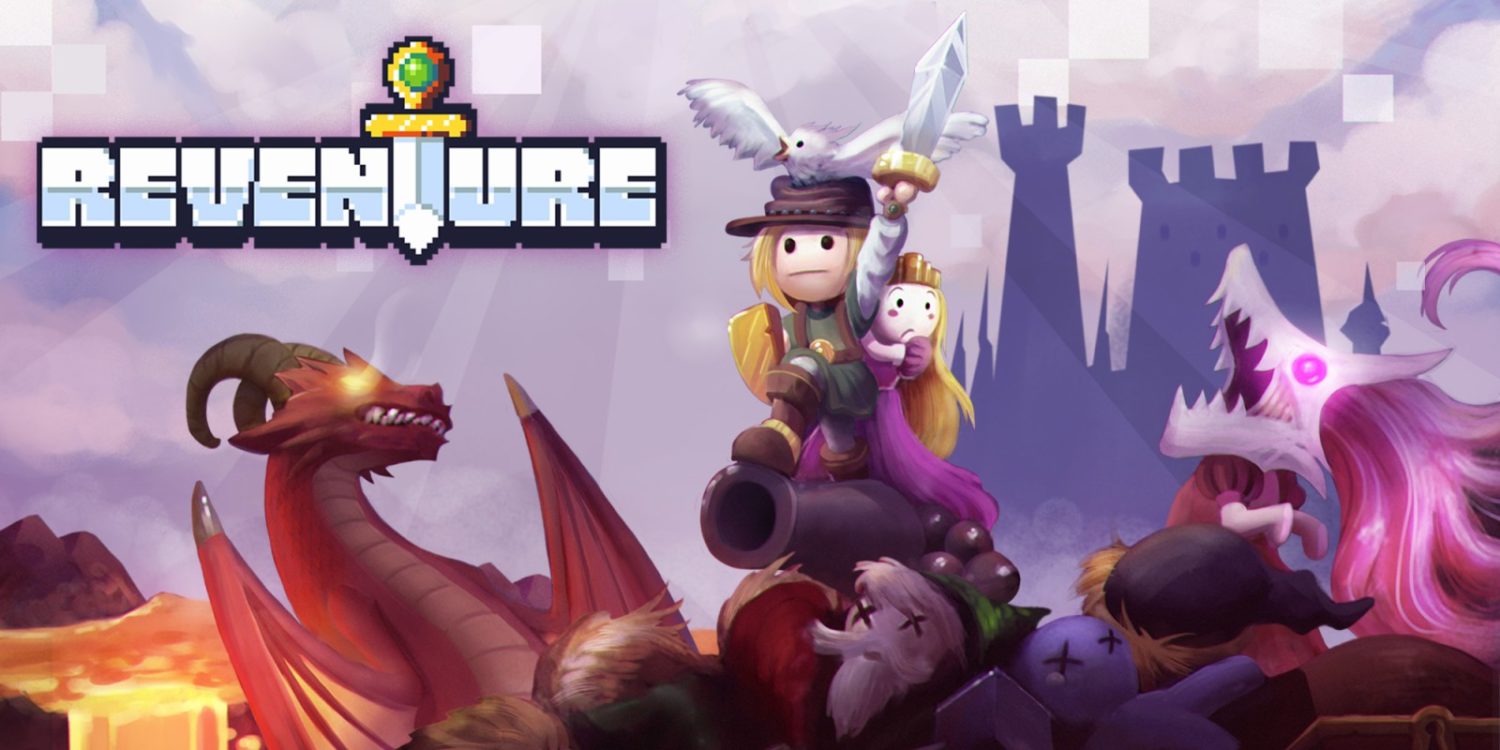 Reventure is an action-platformer game developed by Pixelatto. It sports the unique goal of finding all 100 endings as you set out on adventure again and again – re-adventure, or Reventure, geddit? It’s a humorous take on the genre and an absolute blast to play. Here’s why you need to play this game.

Firstly, this game is well designed. From the moment your spritely character steps out of his little home, the world is ripe for exploring. You’ll cover mountains, caves, dungeons, and sewers, each riddled with tunnels and secrets. The world seems to stretch on and on, which could make replaying a chore. Instead, you’re leaping back into action, ready to attack from a different angle. 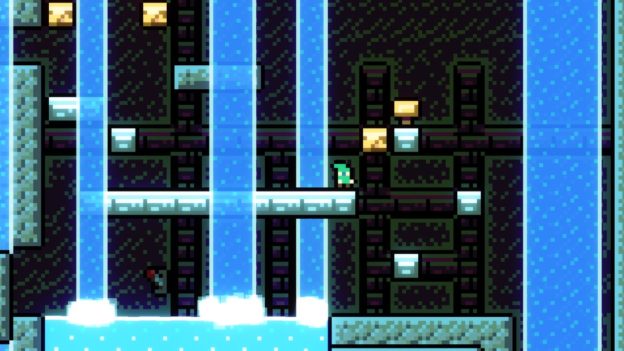 The simple story asks you to rescue a kidnapped princess. Along the way, you’re bound to meet an untimely death. One hundred deaths, to be exact. Each time you expire, a humorous message is displayed on-screen, along with a screenshot and clever title that’s added to your gallery. It’s reminiscent of Zombieland’s “Zombie Kill of the Week”. Whether it’s from falling too far, being impaled, being killed by minions, or just tripping on a random stone, filling that gallery with 100 framed pics is your true goal. And, yeah, maybe you’ll rescue the princess along the way. 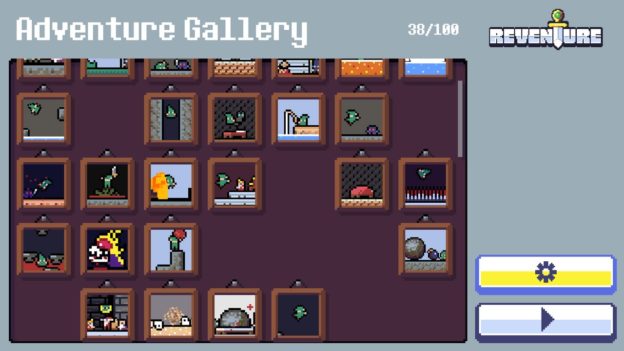 Each death – whether you’re burned or squashed – changes your character. You might return as yourself in another form, or perhaps as someone else who picks up the mantle to become a hero. This is a clever way to continue the story since you’re not resetting the clock each time. I can’t say much more without dipping into spoiler territory. Just know you’ll change into some hilarious characters along the way. They may look different, but they all work the same way.

Reventure is easy to pick up and play. Some deeper moments require puzzle solving, but you’ll mostly be happy running around and discovering new areas to explore. Simply walk, jump, and attack (when you have a sword). Other items only work when they’re within the appropriate area. For example, you can’t bomb randomly; but, if a Zelda-like boulder is blocking your way, it’s obviously begging to be blasted into obscurity. 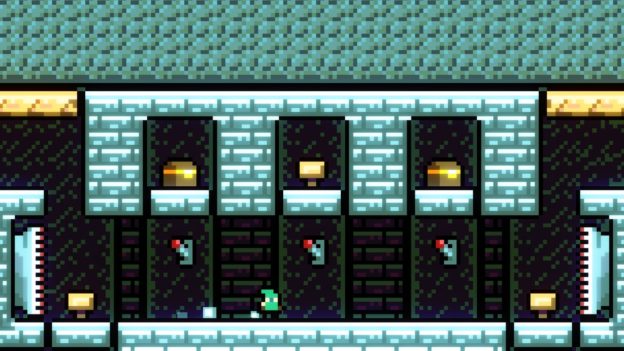 Speaking of Zelda, this game could be seen as an ode to the original game. Or at least a parody of that classic title. There’s a legendary sword, complete with a wise old man giving his “it’s dangerous to go alone!” speech. There’s a princess to be saved, weapons to collect, and a chicken to help you hover. Even the music has an 8-bit Zelda feel to it. 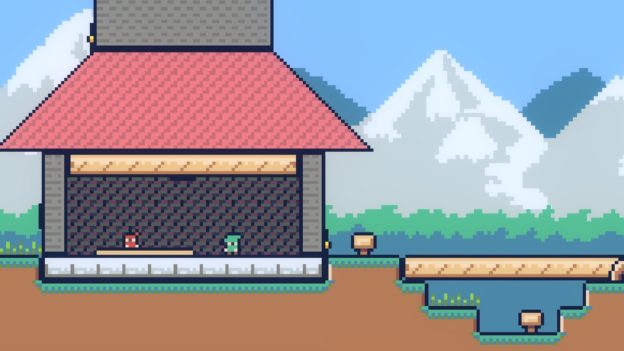 This audio is another highlight. The bright tunes have a way of capturing the mood, whether you’re deep within a dungeon or resting inside your home. The upbeat tempo keeps things light overall, with enough variation to let you know when you’re in a darker place. There are some fantastic tunes that made me stop playing so I could listen and enjoy them.

Reventure’s visual style suits its retro vibe. The pixelated graphics are absolutely charming. It’s amazing how much personality and humor you can squeeze into such a tiny space. The blocky and colorful world is used to great effect, with automated zooming to emphasize a point or create a different perspective. It’s brilliantly done. 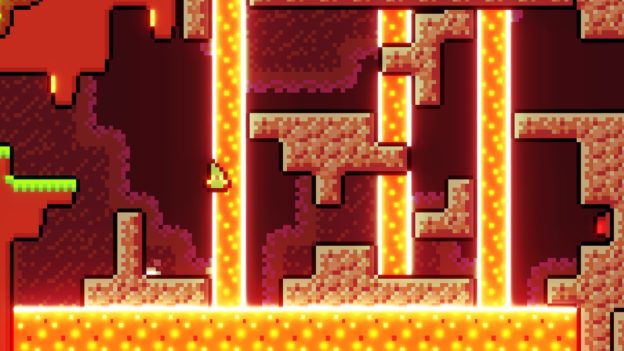 It’s hard to fault this game. If you want to be picky, you could complain about the lack of multiplayer options or online leaderboards. We were happy to watch each other play; each run-through varies in length but is generally short. In terms of online connectivity, you’re updated after each death with a percentage of adventurers who have made it this far. I’m not sure if this information is actually a true representation, but, if so, it’s a cool addition. And I’m in the top 20% of players.

Overall, Reventure is one of the most creative and fun games I’ve played in a long time. It’s almost like a pre-written Scribblenaughts game crossed with NES-style Zelda, all seen through the eyes of a South Park screenwriter. OK, it’s not that crude, but it’s got that funny, slightly offbeat and dark sense of humor. If you’re even remotely interested in platformers or adventure games and you’re looking for something different, I highly recommend Reventure. Meanwhile, I’m off to find that 76th ending…

Reventure is a creative take on the adventure-platforming genre. It pokes fun at classic Zelda-isms while providing an enjoyable way to forge your own path by finding all 100 endings to the game. This humorous game makes excellent use of its retro graphics and audio to create something truly unique and downright enjoyable. Check it out!