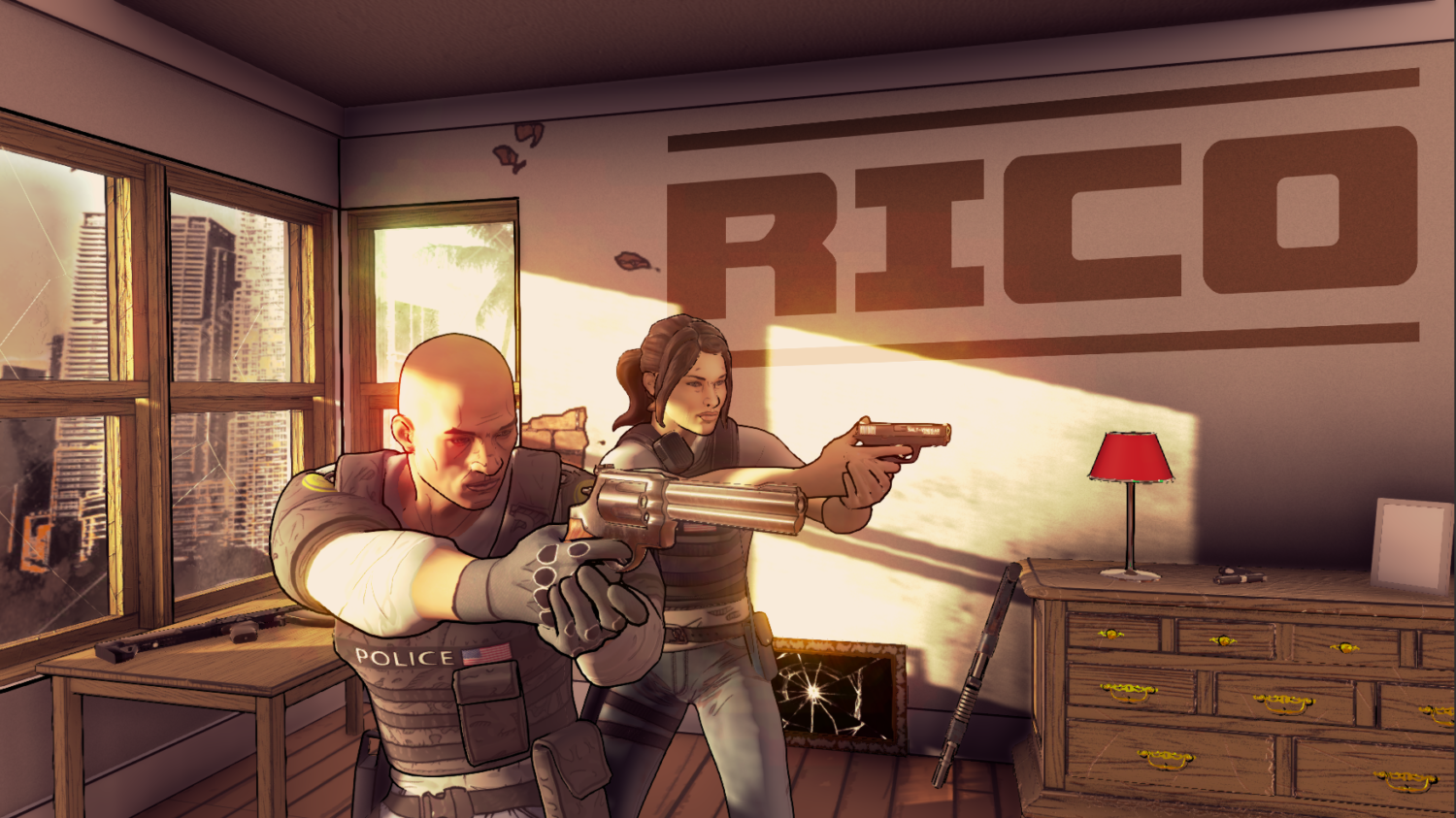 RICO is a game that turned from a simple trailer seen on YouTube to an email inquiring more information, leading into a passion. RICO has quickly become one of my favourite titles released on the Nintendo Switch in 2019 up to this point. In fact, RICO is one of the best indies to date.

The daily challenges add another layer of depth to this game as you chase to beat other high scores and/or times in levels. These daily play challenges also allow for the earning of RP, which is used to unlock camos for your guns.

The campaign is a mission-based experience that has you competing against the clock to solve a case in twenty-four hours. When playing, keep in mind your ammo and health carry from mission to mission. The campaign offers a revive system which is earned through the merits you spend. Each mission grants a certain number of merits. The merits system, apart from the campaign, is where you will get new guns, attachments, health, etc.

If you use all of your revives and die, the campaign is over and you start from the beginning again. This normally would create some frustration, except Ground Shatter Ltd. has managed to make it feel like a competitive aspect of the game. I found myself constantly wanting to keep coming back every day and try to actually beat the campaign.

Although, the campaign is not where the fun ends. In fact, it is where the fun begins. There are several different objective types and modes. My personal favourites are the classic clear objective and the lockdown mode. I have found a huge portion of the replay value for me is the operations part of the game. Operations are never going to feel the same in RICO unless you want them to. Each operation has a unique level ID, which makes the environment completely different. In addition to the depth of a level ID mechanic, there is a difficulty system in place too. This allows you to play through each level ID in the difficulty of your choosing. As this is a procedurally generated game, there is an endless amount of level IDs.

The game’s progression system was a neat touch to see from an indie game. As a fan of customization, this is what will keep me coming back in the long haul besides the gameplay. There was everything from the basic camos, such as gold, to vibrant neon. The customization doesn’t stop with just weapon skins though, as there are unlockable character traits too. There are a total of four characters at launch: Christine Wei, Sofia Alvarez, Frank Walsh, and Travis Walker, each of whom their own background. There are also thirteen different character traits that change up their gameplay.

Although, there is one major flaw with the customization system in place and that is the fact that RP can only be earned through daily play. The issue with this is that, in order to unlock more weapon camos, you will need to grind the same daily operation. I’d propose a situation where if you play on medium difficulty or higher in quick operations you can earn a set amount of reputation for weapon skins. This would benefit players because if you play quick operations versus daily play, it presents the option for endless level ids to be used.

I found myself pleasantly surprised by RICO, and see myself coming back to it for weeks to come. If you’re a fan of either the Borderlands or Payday series, this game is a must try for you. My biggest request for the developers going forward is that it just keeps getting continued support… I think free updates or downloadable content would suit this game well – whether it be new weapon skins, characters, traits, or even skins for characters, I’d be pleased. For only US$20, the replay value is excellent, and it helps make the game satisfying and rewarding.

I found myself pleasantly surprised by RICO, and see myself coming back to it for weeks to come. If you’re a fan of either the Borderlands or Payday series, this game is a must try for you.