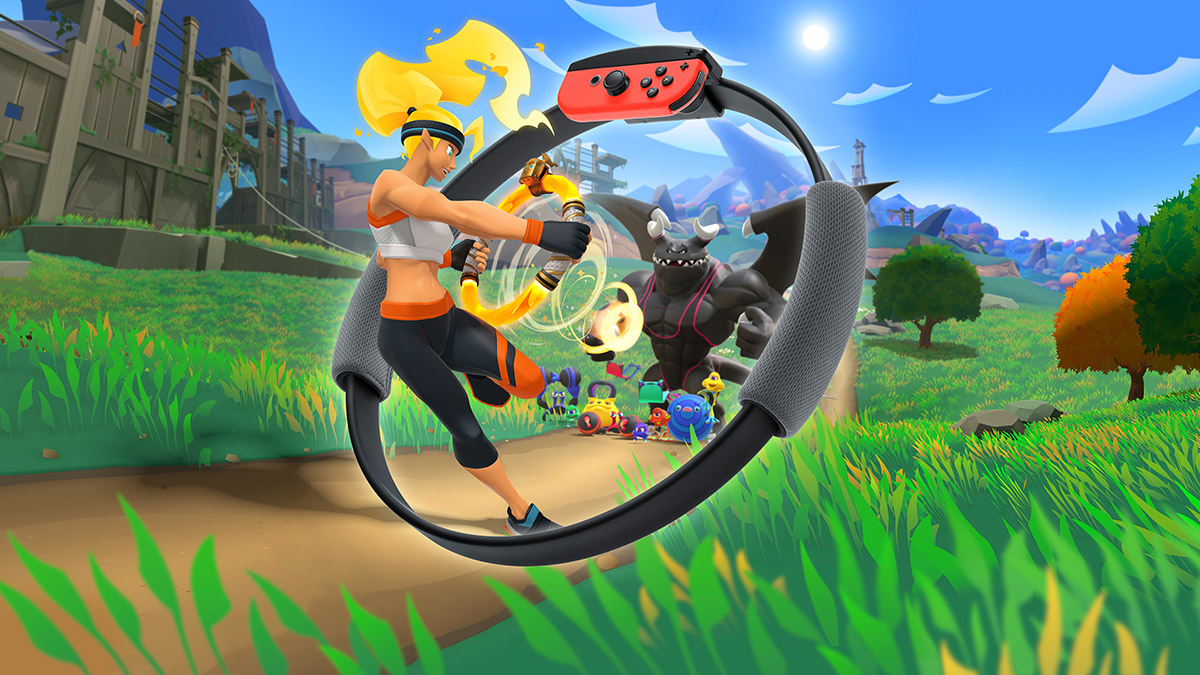 Let’s be clear. I’ve seen a lot of people comment that Nintendo’s Ring Fit Adventure is an RPG first, an exercise game second. That’s simply not true. Yes, there are RPG elements here, but if you removed the exercise component this would be a truly awful RPG. That’s not to say Ring Fit Adventure fails. On the contrary, it’s a stellar entry in the sports/training genre, I just want to temper your enthusiasm if you think you’re going out on some kind of grand adventure.

The story you do get centers around a buff, body-building monster named Dragaux who breaks free of his bonds (thanks to you) and proceeds to flex and pose his way across the land. 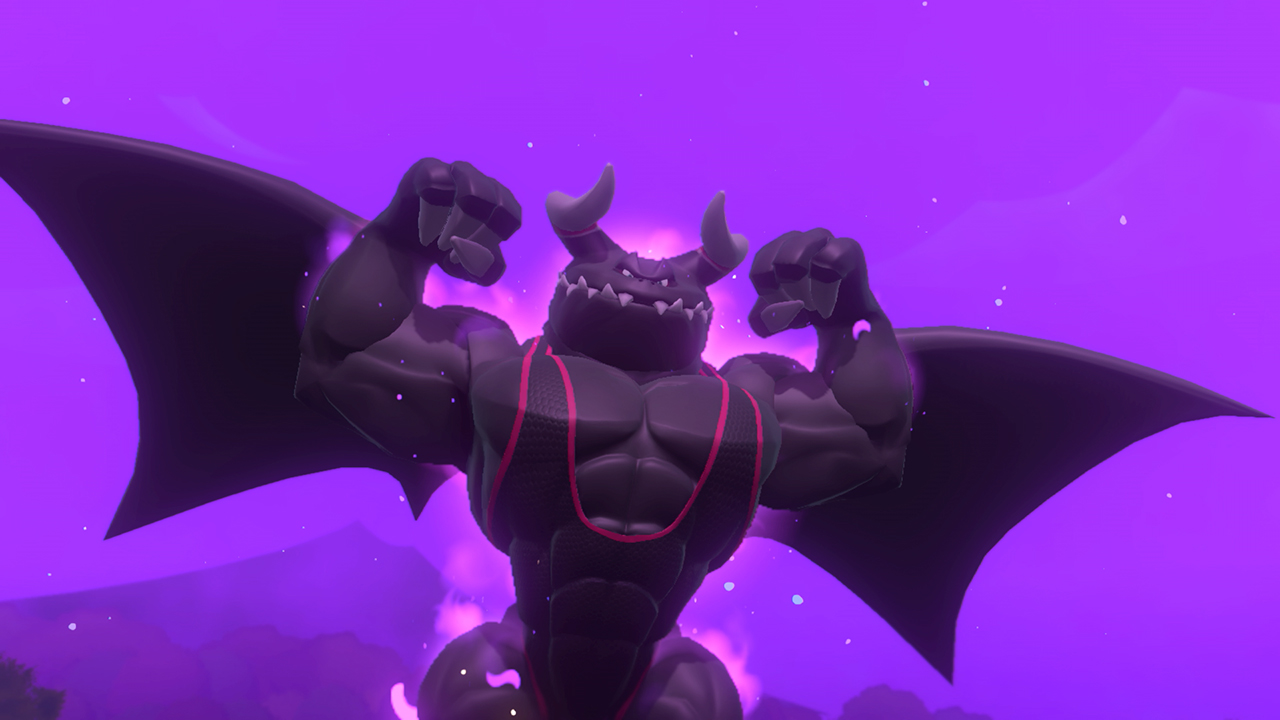 You play as an athlete who—along with a sentient ring that serves as your narrator, trainer, and motivator—is tasked with stopping Dragaux from whatever he’s trying to do by…out-exercising him, I guess. There are numerous tasks to perform and missions to accomplish, but they’re pretty much all just different ways to get you up and exercising. And you will be up and exercising. Ring Fit Adventure has over 100 levels to complete in its story mode, and you’re going to have to play through those levels more than once because the exercise battles can be pretty tough.

Before I get to the exercise program, however, I should introduce you to the equipment. Ring Fit Adventure comes with a Ring-Con and a leg strap. The Ring-Con is the cool part, a resistance ring to which you attach a Joy-Con and use to measure your arm exercises and body orientation. You’ll squeeze it, stretch it, and tilt it according to the exercise requirements, and I have to say it’s my favorite of all the accessories I’ve used in a Nintendo exercise game. It’s fun to work with and it feels substantial, unlike when you were wagging around a Wii Remote back in the day. 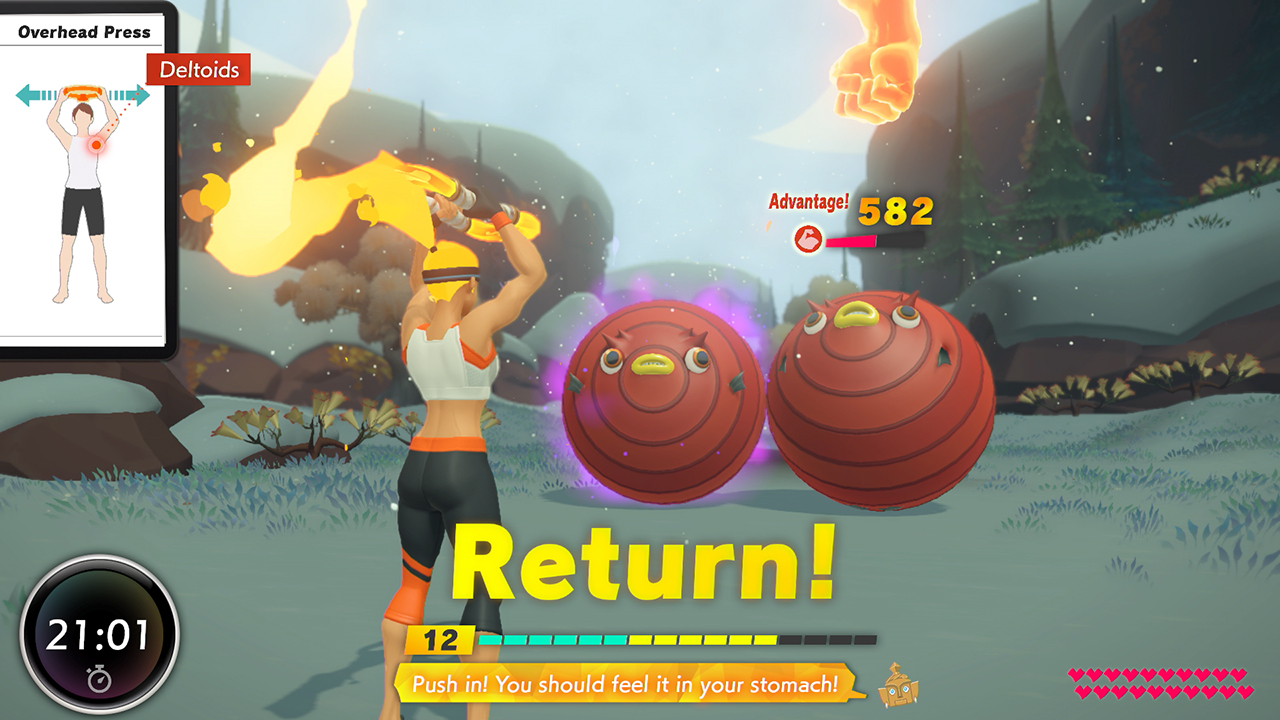 The thigh-strap is simply a Velcro strap in which you place the other Joy-Con and attach to your thigh. This measures your leg movement and orientation, and aside from occasionally slipping out of place it does its job pretty well. I found I had more success keeping it aligned when attaching it directly to my leg under loose-fitting shorts than overtop of shorts or sweats. Either way, it’s much more accurate than Nintendo’s old method of placing a Wii Remote in your pocket.

The Ring-Con and thigh strap work together to record your movements, and those movements are determined by your settings in the game. Ring Fit Adventure allows you to adjust the difficulty based on your goals and abilities, and before every session you’ll be asked if you’d like to lower or raise the workout intensity. When you’re done, it’ll ask if you got through it okay, making it very easy to be challenged without over-exerting yourself. The meat of the game (and therefore your exercise regimen) is presented in story mode, although there are numerous mini-games you can play for quicker routines or just for fun. 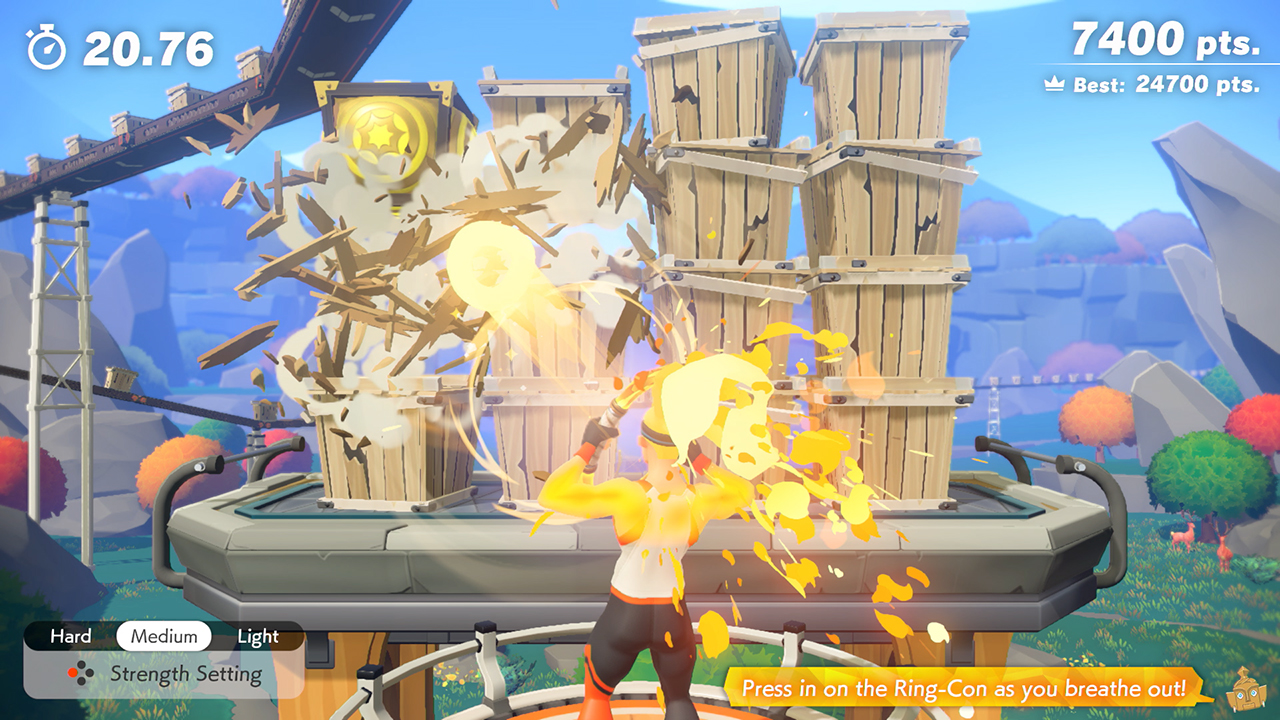 A typical story session will have you jog/sprint (or squat if you set the game to silent mode so you don’t disturb anyone on the floor beneath you) through the land, squeezing the ring to jump and shoot air bursts at boxes or pulling it to draw items such as coins, health hearts and tokens towards you. This gives you something to do while jogging, but more importantly it gives you incentive to replay levels (or grind, really) to make sure you collect all the tokens and money you need.

On each level you’ll come across enemies you must vanquish by exercising. More exercises are offered as you progress, and, in true RPG fashion, you decide which to equip for battle. Exercises are color-coded so certain ones cause more damage to certain enemies, and they come with cool-down periods. In other words, you can’t expect to choose the same exercise throughout the entire routine. When it gets tough on later levels you will want to choose different exercises to make sure you’re using the more powerful color-coded attacks.

Battles will always begin with you performing the selected exercise to attack one or more monsters. The better you are at working through your reps, the more damage you cause. After you’re done, the enemy counter-attacks, taking away your hearts. Defeat it/them and it’s back to some jogging before running into another enemy. Lose, and you have to start the level over again.

Eventually you’ll reach Dragaux for a boss battle. He’s harder to beat, but that again is where the RPG elements come into play. The coins you collect can be used to buy new outfits that provide better defense and attacks. You can also buy smoothies that are used to replenish hearts between exercises. And, of course, you’ll become more powerful as you level up. Dragaux first beat me after I’d been warned that he was level 17 and I was only level 14. That loss, however, took me to level 16. When I fought him the next day, it was enough to help me advance.

You don’t have to participate in story mode in order to get your sweat on for the day. You can access exercises individually or play through the aforementioned mini-games. I didn’t do this that often, but I know it’ll become more important once I’ve completed story mode (hopefully Nintendo continues to release new adventures).

There’s plenty to like and dislike about the game’s design. The gaming world is bright and open, as you’d expect, although some of the levels seem to be set in giant warehouses like the roller-coasters at Disneyworld. They have a lot of life to them, and running/sprinting/high-stepping your way through them is as enjoyable as jogging around Wuhu Island back in Wii Sports Resort.

More importantly, the Joy-Con connection is more accurate than in every other exercise game I’ve used, although it still sometimes frustrates when your movements aren’t registering and you have no idea why. Also, the voice of the ring is pretty annoying. I don’t really need encouragement from a tiki head, anyway. Finally, using the Ring-Con to control the in-game menus is cumbersome, but perhaps unavoidable.

So, does the package work? If you pick an appropriate challenge level you’ll genuinely feel like you’ve worked out after playing through Ring Fit Adventure. I worked up a real sweat here from day one, unlike with the recent Fitness Boxing, and often woke up with sore muscles after a particularly tough routine. It’s not going to replace your 5K training or a trip to the gym, but guess what? I’m not going to a gym and I’m not going to run in any race regardless of the number of Ks. So, if Ring Fit Adventure gives me persistent incentive to get 30 to 45 minutes of physical activity when I otherwise wouldn’t, I’d say it’s done its job.

The RPG element has been overblown, but it provides just enough incentive for you to get up and move. More importantly, it’s engaging enough to keep you on top of it well after you’d’ve lost interest in other exercise apps. The Ring-Con itself is a quality accessory that’s easy to use, and the whole package provides mostly accurate readings and feedback.