If you’ve seen one shmup, you’ve seen ‘em all, right? In a genre that’s fairly stable with its gameplay, Rival Megagun is a shmup with a significant difference. It combines the tried-and-true shooter formula with that of a fighter to add a competitive edge to the game. But does this novel approach pay off?

In Rival Megagun, two jets fight in split-screen fashion against the usual onslaught of enemy ships. Every successful hit adds to a special meter. As this grows, you can trigger attacks on your rival in the next screen via missiles. To make things more difficult for your buddy next door, drones also automatically pop up on their screen after any combo shots you make on your side.

These attacks are little more than a nuisance, though, as your screen fills with drones and missiles while you’re trying to also take down the alien siege directly in front of you. The real fun comes when your hit meter is full. At this point you can trigger a mega attack that transforms your ship into a giant, boss-sized jet. You’re whisked to the top of your rival’s screen – now you’re literally the big bad guy at the end of a shmup level! It’s a ton of fun to play this role reversal, and you’re virtually guaranteed a win at this point. 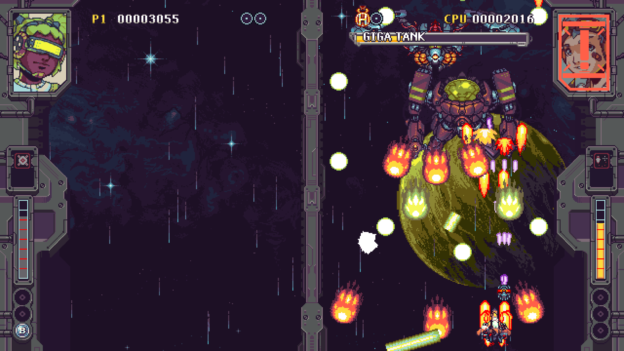 The single-player mode revolves around fighter pilots duking it out to serve Earth against an alien onslaught (even though it would make more sense to work together, right?). In this mode, the screen is split as usual, albeit you’re up against a CPU competitor. There are six fighters to choose from, each with his or her own story and ship to unlock. It’s worth trying them all, with each jet unique enough to make it worth finding your favorite.

The gameplay is pretty tough, too, with bullets flying at you constantly from all directions. You’ll lose many lives over the course of the campaign, even on the very easy setting. There are four difficulty settings: very easy, normal, hard and very hard. Each round is over quickly, with only two hits before your plane explodes and the round is lost. You have two planes before it’s game over, though you can continue as many times as you like. You’ll just have to restart from the beginning of your latest rally. 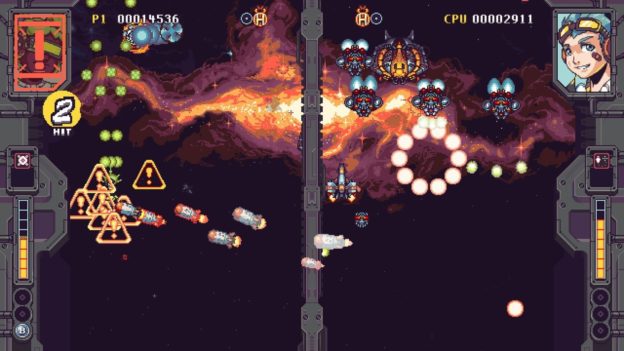 In this way the campaign is actually quite forgiving despite the number of lives lost. You can lose round after round to your foe, but it only takes one win to move onto the next competitor. Unfortunately, this makes the mode seem fairly short, since it can be played through in under an hour. Technically you won’t 100% complete the game until you play through with every character, but it’s essentially the same thing.

The real competition comes in the game’s multiplayer mode, which you can play locally or online. In Versus Mode you can play against your friends or practice against the CPU. You can even set two CPUs against each other, for some reason. This is the mode that makes the game worth replaying, with many extras that add significantly more depth. These niceties include fiddling with several options, like the number of hits your aircraft can take or the number of bombs you start with. You can change the number of rounds, adjust your gear, and even control the items that appear during battle. It adds to a well-made battle mode that certainly puts the “rival” in Rival Megagun. 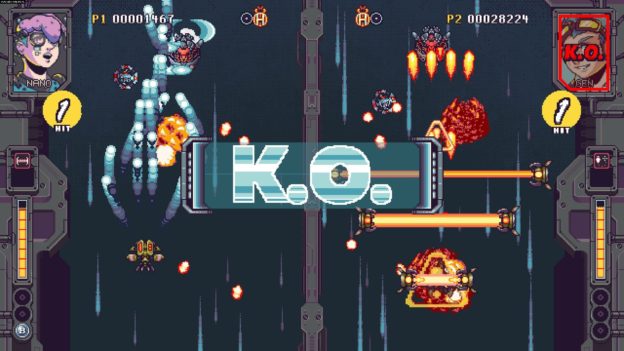 Visually, the game presents a clean and crisp style. The cartoony look is retro-inspired, with a dark, sci-fi edge to it. The audio is decent, with a thumping techno soundtrack that’s pretty standard in shooters. It’s fast paced enough to keep the adrenaline pumping as you shoot everything in sight, which is the point really.

Overall, Rival Megagun is a classic shooter with a twist. It takes the beloved arcade shooter elements – big bosses, lots of bullets, fast-paced action – and throws in a healthy dose of competition. The result is a worthy shooter that lets you fight aliens and your friends, using more than a high score to determine who’s the best shooter in your group.

Rival Megagun successfully blends the tried-and-true shmup formula with a competitive fighter. The single-player is fun though a little short, but the multiplayer mode offers plenty of options for all-out shooter battles with your friends.