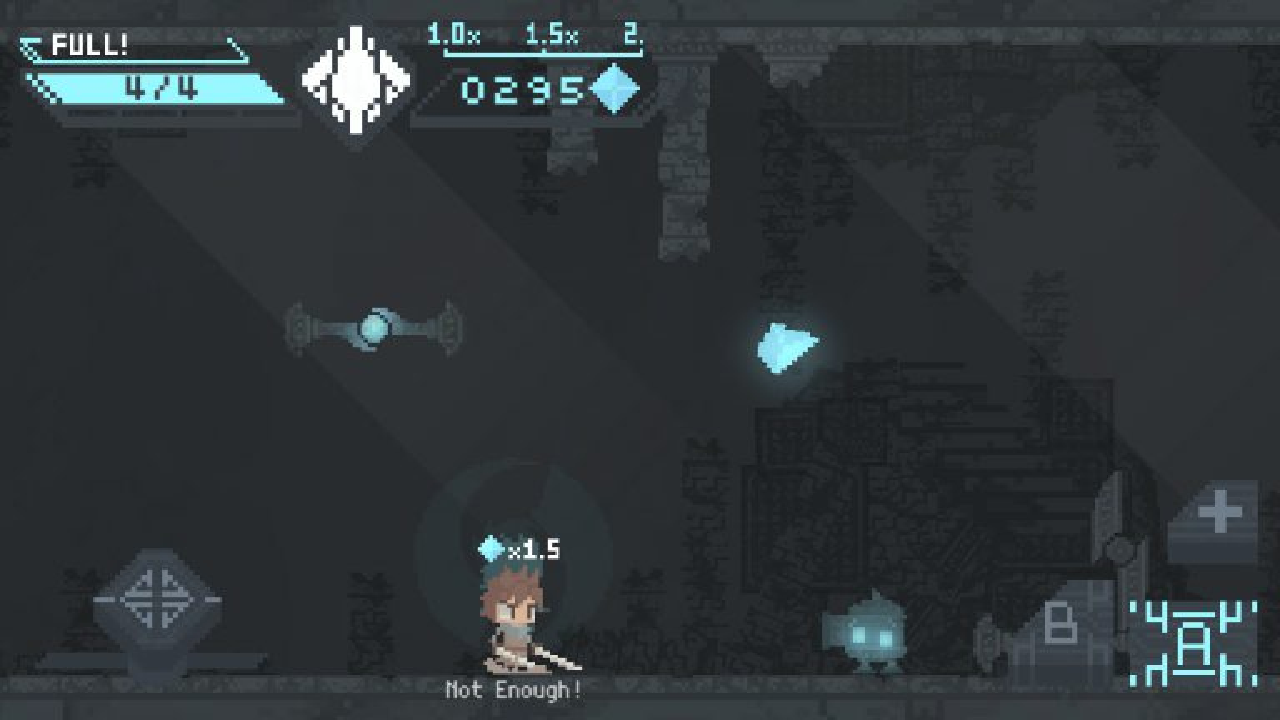 Rotating Brave is a game that utilizes the innovative Nintendo Switch hardware, dressed in a retro skin.

Developed by COSEN, Rotating Brave’s name describes exactly what it is. This action game is best enjoyed when the player uses the Switch in handheld mode and physically turns the screen with each stage.

The game starts in vertical/portrait mode, but instead of using the Joy-Cons, there are on-screen touchscreen buttons provided in this mode. This mechanic takes some getting used to, and as I found throughout multiple failed attempts, it’s easy to fat-finger when you’re trying to attack something. Once in landscape mode, however, the Joy-Cons can be used as the primary control, which takes some of the edge off of the difficulty of the game overall. And in all fairness, there isn’t a balanced or safe way to hold the Switch in portrait mode and use the Joy-Cons. So, the touchscreen buttons make the most sense for handheld play.

Rotating Brave isn’t designed to be difficult in premise, but with the constant shifts between each level, it’s easy to lose some stamina. What brings a player back each round, however, is the sheer stubborn determination of will and the fact that rewards collected (gems and orbs, set as the “currency” for the game) can be carried over at a new start.

These rewards allow a player to cash-in on upgrades and special skills that make the next run-through even more enticing. But luckily this title doesn’t require you to “purchase” the upgrades in order for a player to be successful.

Even without some of the upgrades – such as elongated reach and electrifying dashes – in combat I could feel every attack connect with the enemy. Reaching checkpoints feels equally satisfying given the pace of each level and the hordes of enemies to avoid. The midi-inspired background music lulled me into submission as I played through each level and hoped to avoid attacks from numerous enemies. The enemy designs and movements are predictable, making them easy to understand but not always easy to avoid.

Players at the start are only granted four hits from enemies before it’s game over, which adds additional stress alongside the constant rotations that kept me on edge.

As you progress through each point, small caves appear offering ways to collect more upgrades or discover memories consisting of minimalist pixel art and no dialogue. This use of imagery to tell the underlying subplot of the game is well done and a nice change from heavy text-based content.

This is particularly intriguing to find in a COSEN title – their primary collection consists of quite a few visual novels. Yet clearly their storytelling isn’t limited to one medium, and this action game doesn’t need much to understand what’s going on, while still being visually pleasing.

Overall, playing Rotating Brave was a hands-on experience of what all the Nintendo Switch can truly do when developers take time to utilize the hardware and software in unique ways. This title added dimension to an otherwise everyday-seen side-scrolling action game.

In spite of its side-scrolling pixel-art facade, Rotating Brave adds a plane of intrigue to the mechanics of the game with a constantly shifting perspective.